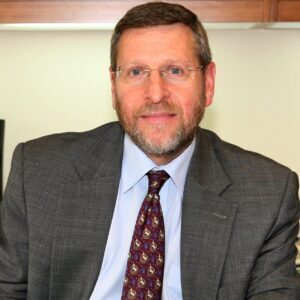 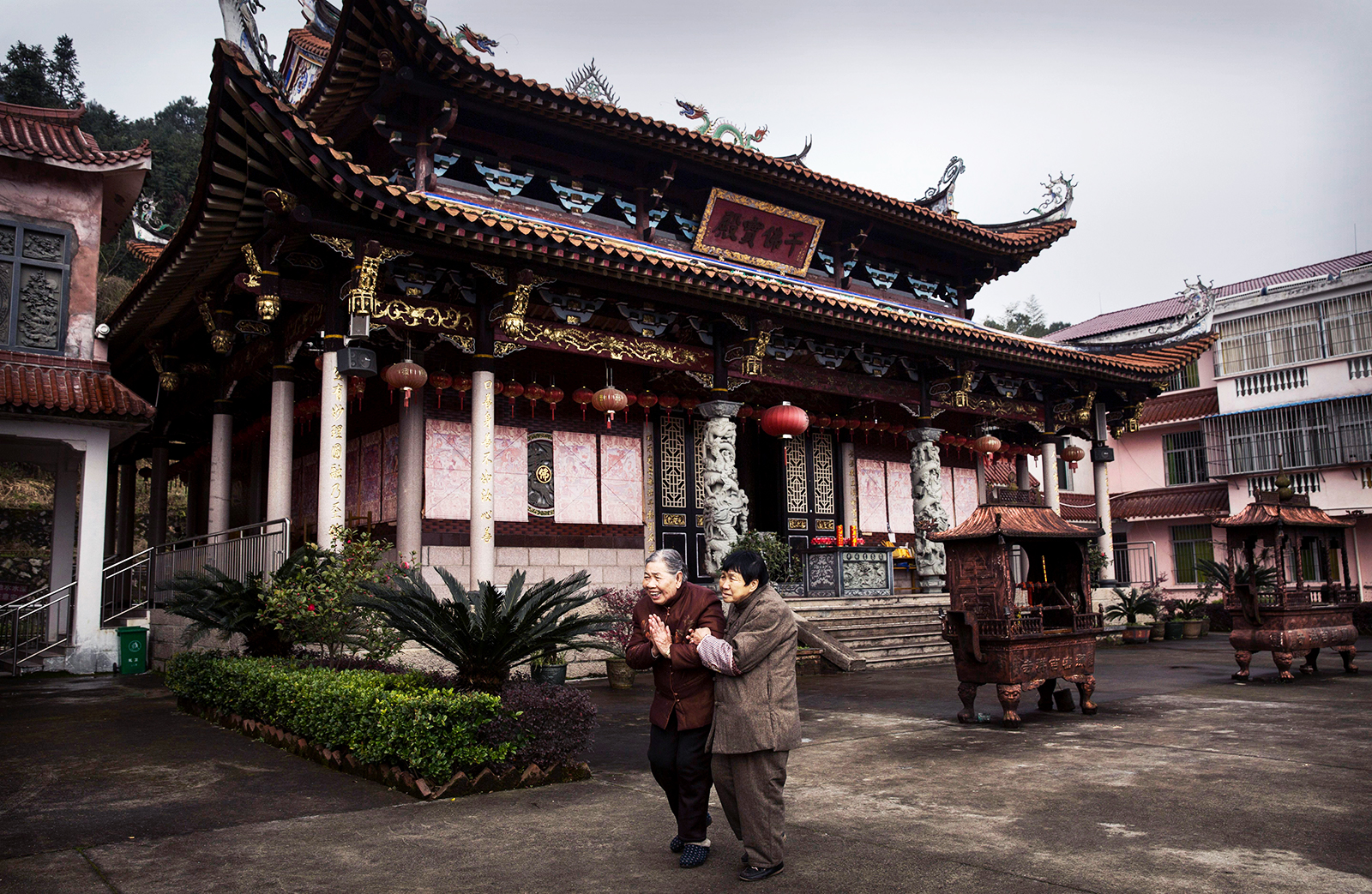 Elderly residents walk in front of the Ji Xiang Temple and nursing home in Sha County, Fujian province, China. It's really a question now of whether China can create good policies to deal with the aging population, and that's going to be a big challenge.

The Chinese government has set a long-term goal to turn China into a fully developed and prosperous country by 2049, 100 years after the founding of the People’s Republic.

In a newly published book called China 2049, the Economic Challenges of a Rising Global Power, Brookings scholar David Dollar and Yiping Huang and Yang Yao of Peking University examine the likelihood of this happening. BRINK spoke to David Dollar.

DOLLAR: I think it’s very likely that by 2049 the world would consider China a fully developed nation. It’s one of these terms that’s not that clearly defined. There are members of the OECD with rather modest per capita income, and China will almost certainly catch up with many members of the OECD.

What is less clear is how close China is going to get to the United States.

If they’re at one-half of the U.S. per capita level, I’m not sure that in ordinary parlance we would consider them fully developed, but they will have moved from middle income up to at least the lower ranks of high income.

BRINK: One of the things you give a lot of prominence to in the book is China’s aging population. Why does that pose a particular threat to the economic development of the country?

DOLLAR: Whatever China does policy-wise, I think we’re going to see a decline in the Chinese population and, most importantly, a decline in the labor force. And once your labor force starts declining, it’s much harder to maintain dynamism in the economy and maintain a healthy rate of growth.

We’ve seen this before in Japan, for example, but the difference is it’s happening at a much earlier stage of development for China.

They have lifted the one child policy, but households are now used to having one child or no children, and it’s expensive and difficult to raise children in China. So I don’t think policy can undo this situation. It’s really a question now of whether China can create good policies to deal with the aging population, and that’s going to be a big challenge. By 2049, they’ll have more 85-year-olds than Europe and the United States combined.

BRINK: What sort of state is the Chinese health care system and its social security system in?

DOLLAR: I would say precarious. The COVID-19 experience is a good example of the strengths and weaknesses in China. The virus emerged from Wuhan city and Hubei Province, and you had a tremendous national concentration of resources bringing in doctors, building a hospital in 12 days — that’s all very impressive, but the underlying health care system is pretty fragile.

So it’s been difficult for them to deal with this nationally, except by locking down any communities where you see the emergence of the virus.

And then, in terms of the core public pension system, it’s not well funded. There’s difficulty with portability, if you work a long time in one city and then go back to your village to retire, it’s difficult to have simple access to your benefits. So they really do need to reform both health care and pensions, and these can be sources of dynamism for them. They’re challenges, but they’re also potential sources of dynamism if they can get it right.

BRINK: Do you get the sense that the Chinese Communist Party is open to innovation in this area? Do you think they understand that that’s the problem and are willing to look at new ideas or not?

DOLLAR: One of the interesting things about China that is challenging for investors is that it’s an extremely mixed environment in many ways.

China has the potential to benefit technologically from certain solutions to environmental issues, and that can become a source of dynamism for the economy.

As an example, they seem to be welcoming foreign investment in assisted living. And there’s actually foreign investors that are expanding in this area and bringing in innovations that have been tried in Europe and the United States. But then, there are other parts of the larger social service delivery that are pretty closed off. So for example, foreign investment in basic medical care is quite difficult in China. They’re open to foreign cooperation and ideas and innovation in some areas, but other parts of the medical establishment are very conservative and tradition-bound.

The Battle Over Openness

BRINK: Another thing that’s often mentioned about the Chinese economy is its turn inward — away from the international trading system and toward a more domestically focused economy. Do you see that as a long-term trend?

DOLLAR: This is another good example of where we see these contradictions. Certainly an important argument in our book is keeping the economy open, making it increasingly open to foreign trade and investment. And to be fair to China, there are some positive examples: Recently, they’ve signed the RCEP agreement, the Regional Comprehensive Economic Partnership, with ASEAN, Japan, South Korea, Australia, New Zealand. It’s a pretty powerful group and the biggest trade agreement, essentially ever. And they’ve negotiated an investment agreement with Europe, though it’s on hold for the moment.

They’ve opened up financial services and parts of medical care, but on the other hand, they’re clearly closing off other aspects of the economy. They are trying to wall off some of the high-tech sectors and develop their own semiconductor industry, which is very hard to do. They’re far behind technologically in the semiconductor area.

So I would say there’s a struggle going on. The more practically minded leaders understand the value of openness, but you definitely have a nationalistic streak, both among the people and among some of the leaders. And they’re fighting it out, literally sector by sector.

BRINK: Do you get any sense that the young generation in China, Gen Z, are going to significantly alter the economy in any way?

DOLLAR: We see lots of expressions of nationalism among the young people. Obviously it’s a controlled dialogue in social media, but I think there are lots of genuine nationalistic expressions. So then, the young people in a political sense are not necessarily more internationalist. On the other hand, they’ve grown up accustomed to using social media, modern technology, and they buy the brands that they like and that have good reputations.

We’ve seen a couple of cases of attempted boycotts that fizzle out quickly because young people are dominant consumers, and they want high-quality products. So, in general, their desire for these kinds of goods and services is positive and is a practical force pushing China to remain open, but then there is this clear nationalistic streak you see expressed around issues like Hong Kong or Xinjiang. So it’d be naive to think that the young people are going to grow up and that Chinese politics are going to change fundamentally.

How Much Will the Chinese Economy Be Damaged by COVID-19?

BRINK: Where do you think China will be 2049, in the de-carbonization stakes?

DOLLAR: Well, great question. President Xi Jinping is committed to being carbon neutral by 2060 — the United States, Europe, Japan, I think, are all committed to it by 2050. Getting to carbon neutrality by 2050 for the advanced economies will be a big challenge. China’s target is less ambitious, but I think there’ll be huge pressure on them to move it up to 2050.

That’ll be a really big challenge for them, but they’re one of the countries that’s losing out from climate change. You’ve seen the terrible flooding recently, ironically the northern half of the country is becoming dryer and is subject to desertification, and the Southern half is becoming wetter with storms and flooding, and the population is divided about in half.

So dealing with these environmental challenges is a big issue. I’m optimistic on the environmental side that there’ll be a broad understanding in China about the importance of moving to carbon neutrality, moving up that 2060 target, and then China is putting solar and wind in place faster than anybody else.

They’re rolling out electric vehicles very quickly. I think China has the potential to benefit technologically from certain solutions to environmental issues, and that can, again, become a source of dynamism for the economy. So I’m cautiously optimistic on the environmental side because I think it’ll be in China’s interest and it fits in with their technological approach to development.

David Dollar is a Senior Fellow in the John L. Thornton China Center at the Brookings Institution and the host of the Brookings trade podcast, Dollar & Sense. He was the World Bank Country Director in China (2004-2009) and the U.S. Treasury representative in Beijing (2009-2013).