RCEP: A New Trade Agreement That Will Shape Global Economics and Politics 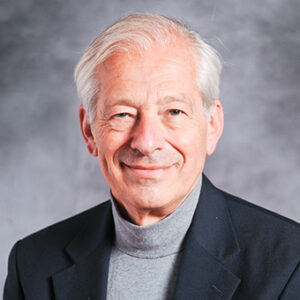 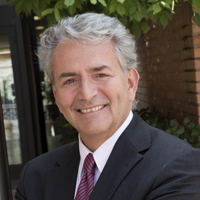 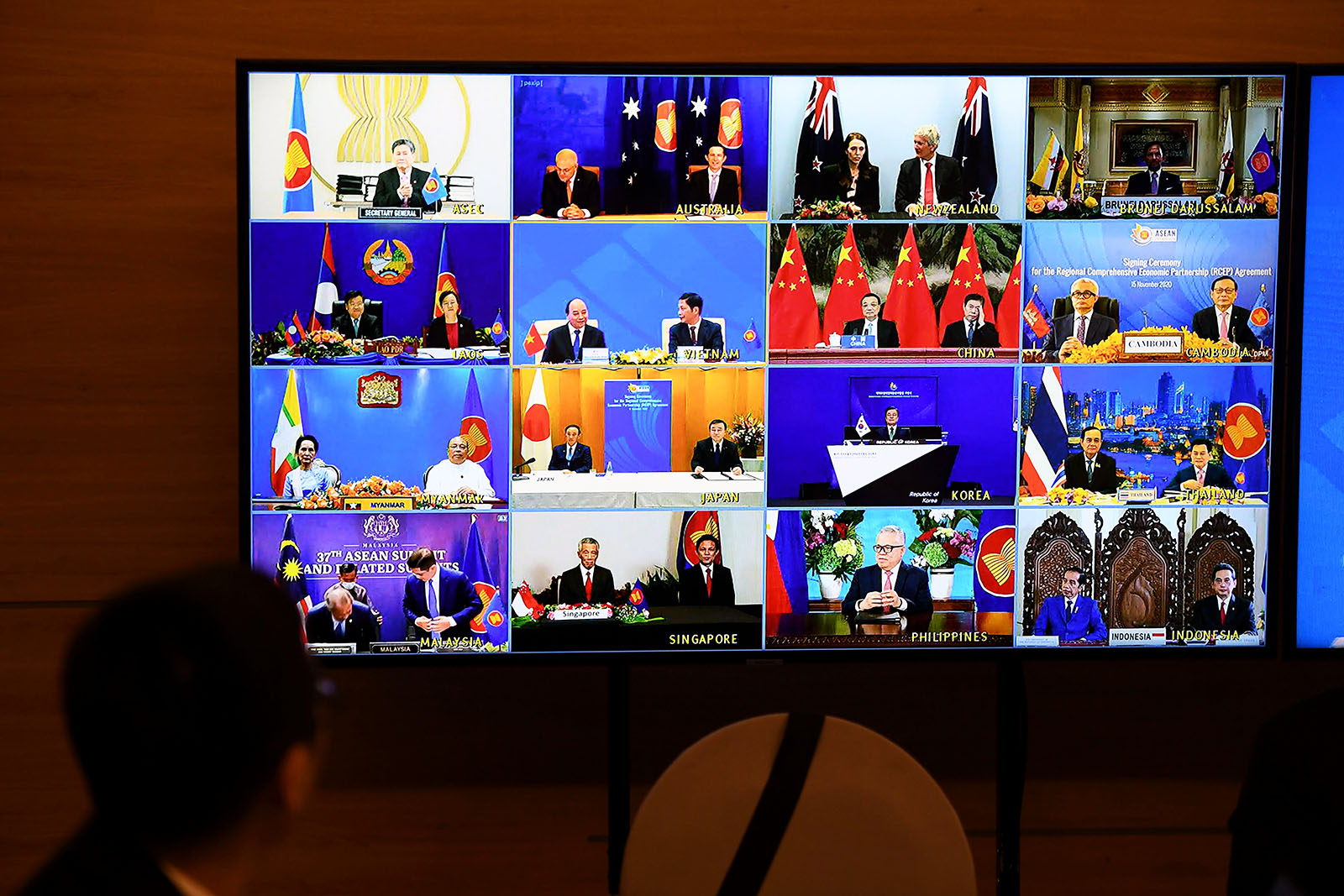 Representatives of signatory countries are pictured on screen during the signing ceremony for the RCEP trade pact at the ASEAN summit that is being held online in Hanoi.

On November 15, 2020, 15 countries — members of the Association of Southeast Asian Nations (ASEAN) and five regional partners — signed the Regional Comprehensive Economic Partnership (RCEP), arguably the largest free trade agreement in history. RCEP and the Comprehensive and Progressive Agreement for Trans-Pacific Partnership (CPTPP), which concluded in 2018 and is also dominated by East Asian members, are the only major multilateral free trade agreements signed in the Trump era.

India and the United States were to be members of RCEP and the CPTPP, respectively, but withdrew. As the agreements are now configured (see Figure 1), they forcefully stimulate intra-East Asian integration around China and Japan. This is partly the result of U.S. policies. The United States needs to rebalance its economic and security strategies to advance not only its economic interests, but also its security goals.

Figure 1: Members of RCEP and CPTPP 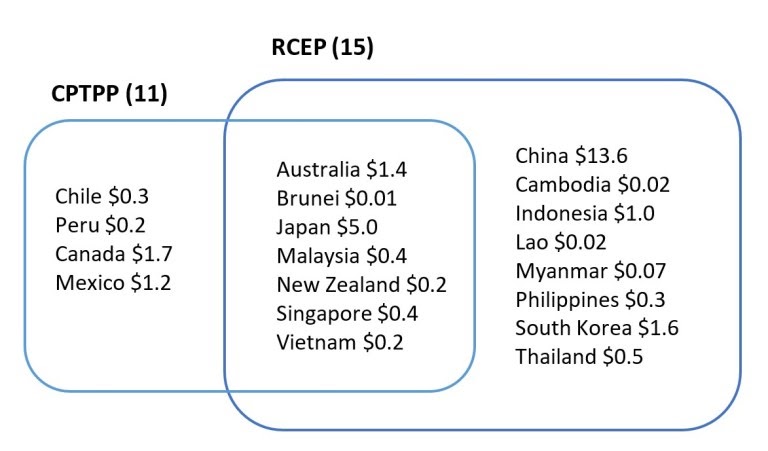 RCEP will connect about 30% of the world’s people and output and, in the right political context, will generate significant gains. According to computer simulations we recently published, RCEP could add $209 billion annually to world incomes and $500 billion to world trade by 2030.

We also estimate that RCEP and CPTPP together will offset global losses from the U.S.-China trade war, although not for China and the United States. The new agreements will make the economies of North and Southeast Asia more efficient, linking their strengths in technology, manufacturing, agriculture and natural resources.

The effects of RCEP are impressive even though the agreement is not as rigorous as the CPTPP. It incentivizes supply chains across the region but also caters to political sensitivities. Its intellectual property rules add little to what many members have in place, and the agreement says nothing at all about labor, the environment or state-owned enterprises — all key chapters in the CPTPP. However, ASEAN-centered trade agreements tend to improve over time.

Southeast Asia will benefit significantly from RCEP ($19 billion annually by 2030) but less so than Northeast Asia because it already has free trade agreements with RCEP partners. But RCEP could improve access to Chinese Belt and Road Initiative (BRI) funds, enhancing gains from market access by strengthening transport, energy and communications links. RCEP’s favorable rules of origin will also attract foreign investment.

RCEP, often labelled inaccurately as “China-led,” is a triumph of ASEAN’s middle-power diplomacy. The value of a large, East Asian trade agreement has long been recognized, but neither China nor Japan, the region’s largest economies, were politically acceptable as architects for the project. The stalemate was resolved in 2012 by an ASEAN-brokered deal that included India, Australia and New Zealand as members and put ASEAN in charge of negotiating the agreement. Without such “ASEAN centrality,” RCEP might never have been launched.

To be sure, RCEP will help China strengthen its relations with neighbors, rewarding eight years of patient negotiations in the “ASEAN way,” which participants typically describe, with varying degrees of affection, as unusually slow, consensual and flexible.

RCEP will also accelerate Northeast Asian economic integration. A spokesperson for Japan’s Ministry of Foreign Affairs noted last year that negotiations on the trilateral China-South Korea-Japan free trade agreement, which has been stuck for many years, will become active “as soon as they are able to conclude the negotiation on RCEP.” As if on cue, in a high-profile speech in early November, President Xi Jinping promised to “speed up negotiations on a China-EU investment treaty and a China-Japan-ROK [South Korea] free trade agreement.”

Finally, RCEP and the CPTPP are powerful counterexamples to the global decline in rules-based trade. If RCEP spurs mutually beneficial growth, its members, including China, will gain influence across the world.

Looking back, the U.S. government’s Asia policies during the Trump administration focused on a new Free and Open Indo-Pacific (FOIP) vision. As experts have noted, the principles of FOIP — an open, inclusive, peaceful region — were consistent with established U.S. policy. But the administration’s tactics then emphasized isolating China from regional economic networks and prioritized security arrangements centered on the Quad (Australia, India, Japan and the United States).

Looking ahead, one U.S. option is to continue FOIP in current form with greater multilateral support. The approach of President Donald Trump — minus inflammatory rhetoric — has support in Congress and even in some ASEAN countries like Vietnam. Yet the approach risks sidelining the United States while economic arrangements like RCEP, CPTPP and BRI continue to grow. Without an economic pillar, FOIP will still push countries to choose between economic and security interests.

A second U.S. option is to re-engage fully in regional economic networks alongside an active security role. For example, the United States could join the CPTPP and advocate its rapid enlargement to Indonesia, the Philippines, South Korea, Thailand and the United Kingdom. U.S. markets and technology make such arrangements attractive and, in the long run, might persuade China to join (we estimate big gains if it does). But current U.S. politics appears to offer little support for this approach.

A third U.S. option is to emphasize intensified soft-power engagement combined with narrow but firm security commitments. This approach would build on U.S. strengths and buy time for more ambitious initiatives. It would emphasize vigorous participation in regional forums, people-to-people exchanges, principled advocacy of rules-based trade and a clearly articulated military presence. It would benefit from supportive U.S.-China understandings, no mean feat in the current context.

A version of this piece was originally published by the Brookings Institution.

Peter A. Petri is the Carl J. Shapiro Professor of International Finance at the Brandeis International Business School and a nonresident senior fellow in the John L. Thornton China Center at the Brookings Institution. He served as the School’s founding dean from 1994 to 2006 and as its interim dean from 2016 to 2018. His research focuses on international trade, investment and technological competition, primarily in the Asia-Pacific region.

Michael Plummer has been the director of SAIS Europe since 2014. A SAIS Professor of International Economics since 2001 and the Eni Professor of Economics since 2008, he was Head of the Development Division of the Organization for Economic Co-operation and Development (OECD) in Paris from 2010 to 2012; an associate professor at Brandeis University (1992-2001); and Editor-in-Chief of the Journal of Asian Economics (Elsevier) 2007-2015 (currently Editor-in-Chief Emeritus).