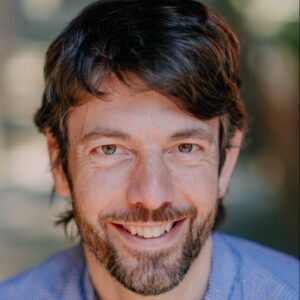 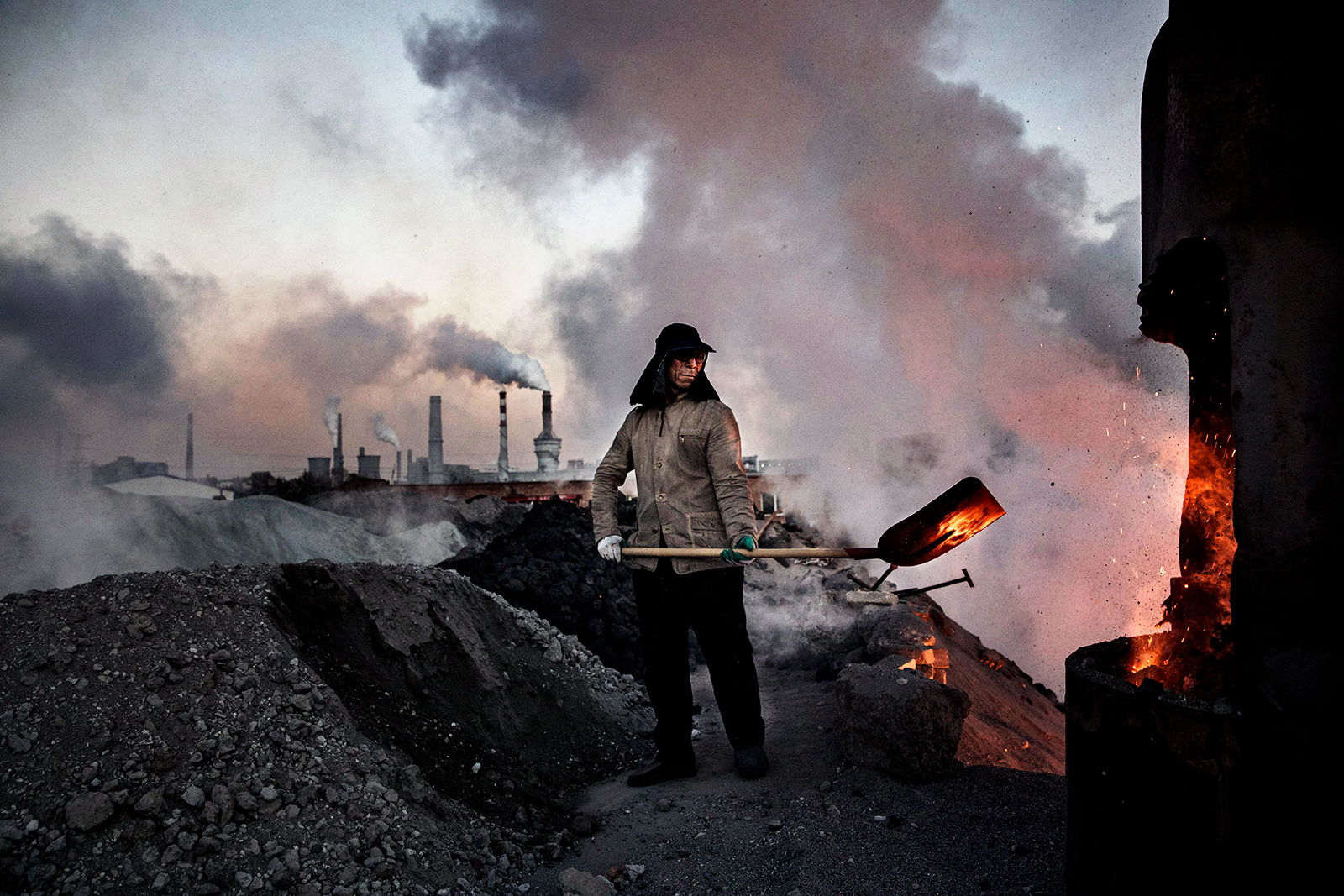 A laborer loads coal into a furnace as smoke and steam rise from an unauthorized steel factory in Inner Mongolia, China. China’s sheer population size means it is already the largest absolute emitter, with annual carbon emissions equalling some 10 metric tons of carbon dioxide equivalent per head.

China’s national emissions trading scheme marks the first national effort to price carbon as the world’s largest polluter. The initial design of the scheme shows limited ambition, but it provides a foundation that could be transformational.

The scheme, which started operations in June, will focus on the power sector — steel, cement and aviation were removed from earlier plans. It will provide permits for emissions to over 2,200 companies, based on historic emissions levels and benchmarks on fuel efficiency.

Those covered will need to report emissions and will be able to trade permits with others, with the goal of incentivizing providers to improve the efficiency of power production.

It’s a major step forward for China to put a price on carbon, though the incentives are weaker than in most other major economies. Still, the EU’s plans for a carbon border tax and ambitious proposals on a global agreement on pricing carbon from the IMF could help catalyze the transformational potential of energy trading schemes (ETS) everywhere.

Carbon pricing is not new. It has long been seen as a highly efficient way of reducing emissions. The EU, for example, established its trading scheme in 2005; 65 carbon pricing initiatives have been implemented globally, covering 45 countries; and China already has eight regional pilots.

While this figure remains well below the per-head figures of the highest emitters, notably Australia, Canada and the U.S. — which each emit around 20 metric tons per head — it is below the EU’s figure of around six and is increasing quickly.

Therefore, with President Xi Jinping’s commitment to “dual carbon” targets of emissions, peaking by 2030 and reaching a net-zero emissions target by 2060, there is a new urgency in the effort to reduce emissions levels.

Carbon Pricing On a Global Level

The scheme covers some 40% of China’s carbon emissions, but the strength of the incentives to substantially reduce emissions is unclear. The combination of coverage and pricing level can make it difficult to assess the overall effect on emissions behavior, but one way to analyze the effect at the country level is to look at the overall revenue generated by carbon pricing (including emissions trading) against the level of emissions in the economy.

My colleague Beata Cichocka and I examined carbon pricing in the G20 and 20 other major economies. Across these countries, carbon pricing raised $90 billion in 2018, equivalent to around one-eighth of 1% of global output (0.125%); and adding some $3 per metric ton to the cost of carbon across those countries with schemes. 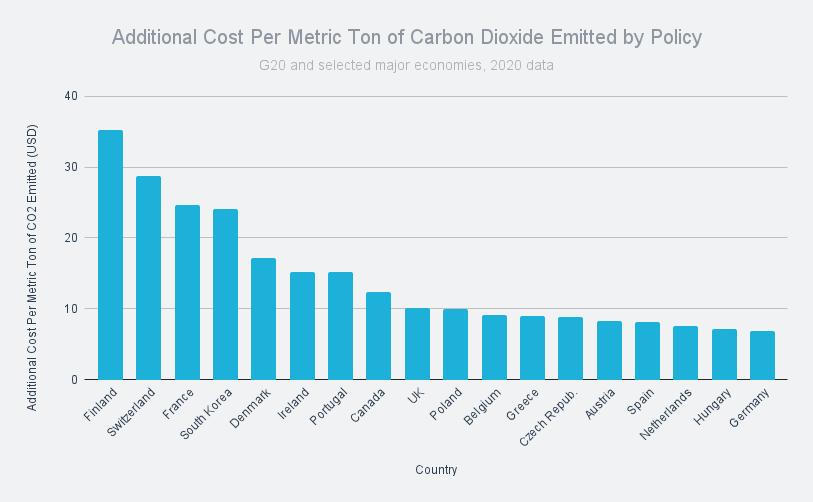 How China’s ETS Fits In

Although it may be able to overtake the U.S.’s current level, China’s efforts with the national ETS will keep carbon prices in the bottom half of the countries we analyzed. It’s unclear how much the scheme will raise, though a recent survey of stakeholders expects the price to rise to $11.0 per metric ton of carbon dioxide in 2025. But since this would only cover a portion of emissions, the economy-wide carbon cost would be lower.

Taking the 2025 price and adding to existing regional pricing, which will be “gradually integrated,” would imply an economy-wide figure of $4.80 per metric ton — still a substantial increase.

How ETS Can Evolve

China’s national emissions trading scheme is a starting framework. Incentives and coverage can be strengthened. There are two international efforts that could see China and other countries move more quickly to policies with transformational potential.

First, the EU is developing plans for a Carbon Border Adjustment Mechanism (C-BAM), intended to address “carbon leakage,” where emissions are being shifted out of the EU as European regulations are tightened, and level the playing field with non-EU producers.

C-BAM will require importers to report on imports and buy certificates for carbon that has not already been priced and will apply to carbon-intensive sectors — steel, iron, cement, fertilizers, aluminum and electricity — where carbon pricing is not in place in countries exporting to the EU.

Asia-Pacific Must Phase Out Fossil-Fuel Subsidies

The prospect of reduced exports may be an important one, seeing as these sectors would be very partially covered by China’s current ETS and that the EU is an important market for China (accounting for 15% of China’s total exports in 2020, though just 3% of that is in targeted basic material products).

A second and new initiative proposed by the IMF’s staff is that countries should agree to a global minimum carbon price, differentiated by the level of a countries’ income-level. This follows the economic logic of the minimum corporate tax rate, addressing race-to-the-bottom incentives in cross-border investment. The IMF team proposes three minimum carbon prices of $75 per metric ton for high-income countries, $50 for emerging economies and $25 for low-income countries.

Although this is a new proposal, it has significant economic merit — enabling countries to move together with common carbon prices and creating strong incentives to reduce emissions without the risk of displacing those emissions overseas.

These types of programs could provide further impetus for China, the world’s largest emitter, to build on the foundations of its new national emissions trading scheme and make good on President Xi’s critical emission ambitions. Either way, both companies and governments will need to pay attention to these changes and understand their carbon use in order to tackle climate change and avoid being left behind as the global regulatory and trading system evolves.

I am grateful for input and analysis on this article from Beata Cichocka. All views and any errors remain mine.

Senior Policy Fellow at The Center for Global Development @EconMitch

Ian Mitchell is a senior policy fellow at the Center for Global Development and co-director, Europe. He is also an associate fellow with Chatham House’s Energy, Environment and Resources programme. Before that he was a senior civil servant and economist in the U.K. Government, most recently leading International and Strategy Analysis at the Department for Environment, Food and Rural Affairs.

Til Schuermann Partner and Co-Head of Oliver Wyman’s Risk & Public Policy Practice
URL: https://www.brinknews.com/chinas-new-emissions-trading-scheme-has-transformational-potential/
Get ahead in a rapidly changing world. Sign up for our daily newsletter. Subscribe
​​