‘Eyes in the Sky’ Now Routine for Disaster Assessment, Recovery 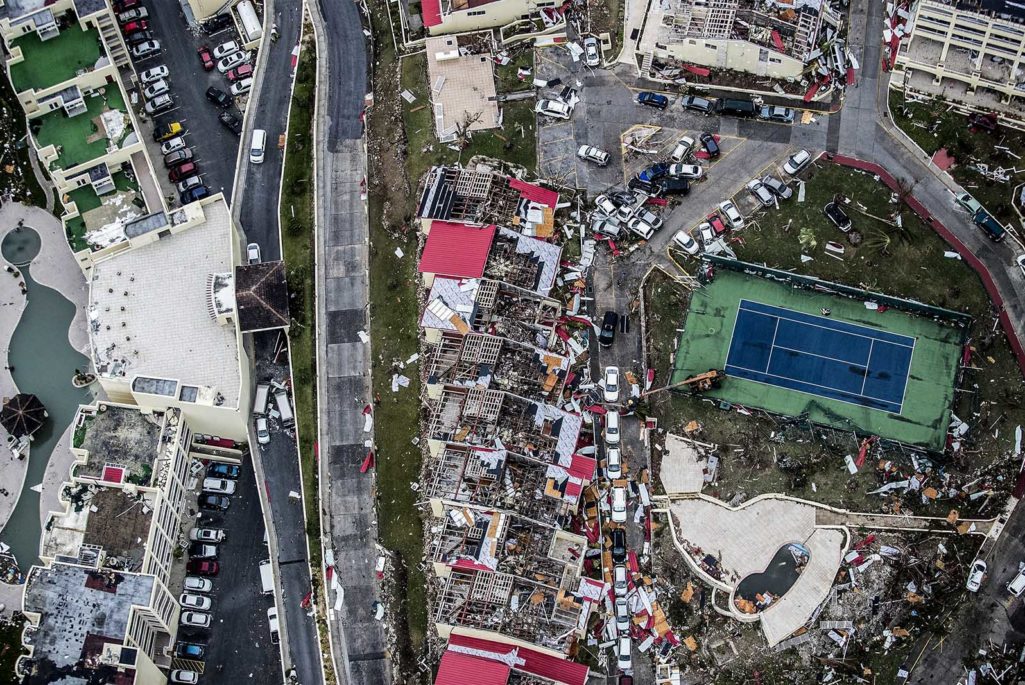 Aerial photography taken and released by the Dutch department of Defense on September 6, 2017 shows the damage of Hurricane Irma, on the Dutch Caribbean island of Saint Maarten.

In the wake of flood, surge and wind damage from Hurricanes Harvey and Irma, access to numerous residential, commercial and industrial properties was limited for days, even weeks. Many property owners struggled to safely assess the physical and economic losses. Such access issues and the number of claims have also limited insurance adjusters’ ability to assess damage as resources are stretched.

Given the billions of dollars in losses from these and other storms this year, the ability to gather information under trying conditions at an early stage is vital to recovery.

A range of rapidly evolving technologies, known collectively as “visual intelligence,” is being developed and making a difference in managing catastrophic disaster response and claims assessment for insureds and insurers. Drones, fixed-wing aircraft, helicopters, satellites, and open source intelligence—such as traffic cameras, YouTube, Facebook and Twitter—combined with expert analysis, are providing real-time insights for initial loss projections. These technologies and analyses provide many layers of data, allowing claims processes to move more swiftly and effectively.

Much media attention has been focused on drone use by the insurance industry during recent disasters. Drones have been used commercially since 2003, but under tight regulatory restrictions. In the United States, increased use has been propelled by changes in Federal Aviation Administration (FAA) regulations.

While commercial use of drones less than 55 pounds is now more common, there are still many operational restrictions and the risk of being denied permission to fly if outside regulatory parameters. For example, drones couldn’t be flown in Houston when flight conditions improved in the wake of Harvey because the FAA enacted a temporary flight restriction given the immense search and rescue and humanitarian relief efforts required.

Factors beyond regulations may also inhibit drone integration in post-disaster scenarios. Weather is one concern, as standard drones cannot be deployed in the rain, making storm and flood coverage difficult unless higher-cost specialist units are available. Additionally, the pilot must be within eyesight of the drone, which can be impossible if there are road accessibility issues. However, law enforcement and other agencies are increasingly provided with special exemptions. For instance, the UK Fire and Rescue service can now deploy 3 miles beyond line of sight. Whether or not such exemptions will be extended to commercial operators remains to be seen.

Since drones may not be the best or most practical option in every situation, visual intelligence (VIS) incorporates satellites and fixed-wing aerial technology for photo and video imagery following a catastrophic event. The variety of imagery generated by these technologies includes vertical, oblique, thermal, infrared, lidar, radar, mapped video, and immersive 3-D visualization and measurement. They also can provide distinct levels of detail, from wide-area mapping to a narrowly focused, two-centimeter view.

Information about losses is also available from imagery sponsored by U.S. government agencies, such as the National Oceanic and Atmospheric Administration (NOAA) and Civil Air Patrol. These government programs help prioritize current emergency response needs and build on experience from previous disasters. The imagery collected by NOAA and other agencies is typically available to all within four to six hours of their flight. While these government programs can be helpful, they cannot be wholly relied on as flight plans may not cover all impacted areas.

As with drones, a variety of conditions may impact the commercial use of satellites and fixed-wing aircraft for visual intelligence purposes. For example, the Caribbean is extremely difficult to access by fixed-wing aircraft, and deployment can be cost prohibitive.

Additionally, a fixed-wing aircraft must launch close enough to the disaster and have refueling options and power and telecommunications capabilities that allow data to be downloaded and uploaded. Ongoing cloud coverage also presents challenges as it will block a satellite’s view. Fixed-wing aircraft cannot necessarily fly below the cloud level and will produce blurry images if it is raining below the cloud ceiling.

Neither technology offers the level of imagery detail a drone can, but they can provide valuable information when there is severe and widespread damage. The fixed-wing aircraft images can offer more dynamic imaging options than satellite alone by capturing both a vertical and oblique “birds-eye” perspective. In the case of flood or storm surge analysis, this sideways view offers a better sense of the water levels and overall damage, especially of wash-through. Such logistical difficulties can delay image gathering, which is a challenge because flood waters often recede quite rapidly. However, images can still capture the overall extent of the damage and assist in triaging an organization’s initial response.

Much attention has been focused on the post-loss uses of drones and other visual intelligence, but these tools can be applied to the full cycle of risk management and business decision-making.

Combinations of visual intelligence technologies can establish what a property looks like both under normal circumstances and following a disaster. These point-in-time images may be of critical importance if an area faces back-to-back disasters in order to document what damage occurred in the first storm versus the second.

This technique was used to assess the damage from Canadian wildfires, the Tianjin port explosion, UK floods, and now Harvey and Irma. Not only did the data gathered from non-human sources come in faster, it reduced safety exposures in hazardous areas and accelerated claims handling. Consider assessing roof damage. Rather than pay costly fees and risk potential injuries from a contractor climbing up on the roof, a drone can quickly gather this basic data to determine next steps.

When applied to an organization’s losses, there are four main uses for visual intelligence:

Triage for Loss Adjusting and Inspection

For organizations with possible damage to multiple sites, visual intelligence can assist leadership to triage which areas have the greatest damage and accessibility issues, and which require immediate attention (e.g., mitigating further damage by applying a temporary roof covering). Although an onsite investigator may be able to drive out to make these assessments, it can take more time, be hazardous, and be more expensive.

Organizations can then leverage the visual intelligence data to effectively direct resources. Additionally, the images can help access supply chains. Knowing where suppliers’ facilities are located can help to quickly assess the damage they endured and the potential follow-on impact.

For properties that were destroyed, images can serve as proof to accelerate the claims settlement with insurers, although these decisions cannot be fully based on images. For example, in the recent wildfires in Fort McMurray, Canada, visual intelligence allowed insurers to establish initial loss estimates and make claims payments weeks before direct access to the affected area was possible.

Insurers will not settle claims based on imagery alone in most cases, but they may provide advance payments or other benefits if visual intelligence helps prove damage and ingress/regress issues. Additionally, if the site experiences a complete loss, the insurer may choose to settle the claim based on the visual intelligence. This was the case for some total losses in the Japanese tsunami and the Fort McMurray catastrophes. Additionally, Esurance has begun to automatically settle auto claims based on flood footage.

For insurers, visual intelligence can assist in estimating the cost of an event in order to ensure that they have the proper financial protections in place to cope. Depending on the scope of the natural disaster, insurers may require a top-up cover. CAT modeling will typically provide the industry with sufficient insight into loss potential, which is used prior to the event. However, visual intelligence is the best option in areas to view actual impact and start to make some assessments, as was case for the Japanese tsunami.

For the broader insurance industry, there are currently limiting factors to the technology. For example, a drone is not capable of learning the algorithms necessary to make the assessments that a loss adjuster can about whether the damage to a building is significant, partial, or complete. But there may soon come a time when considerations for advanced payments are possible based on the images.

The use of visual intelligence by insurers is at an early stage. But its use during events such as Harvey and Irma will add to its growing capabilities. Visual intelligence can add a new dimension to recovering from a catastrophic event by enabling the gathering of real-time, actionable information to advance insurance claims while preserving life, safety, and business operations.

Duncan Ellis is directly involved in numerous accounts of all sizes and is responsible for the program design, marketing, and servicing of new and existing global, international, and domestic property programs.

Carolina Klint Risk Management Leader, Continental Europe at Marsh
URL: https://www.brinknews.com/eyes-in-the-sky-now-routine-for-disaster-assessment-recovery/
Get ahead in a rapidly changing world. Sign up for our daily newsletter. Subscribe
​​