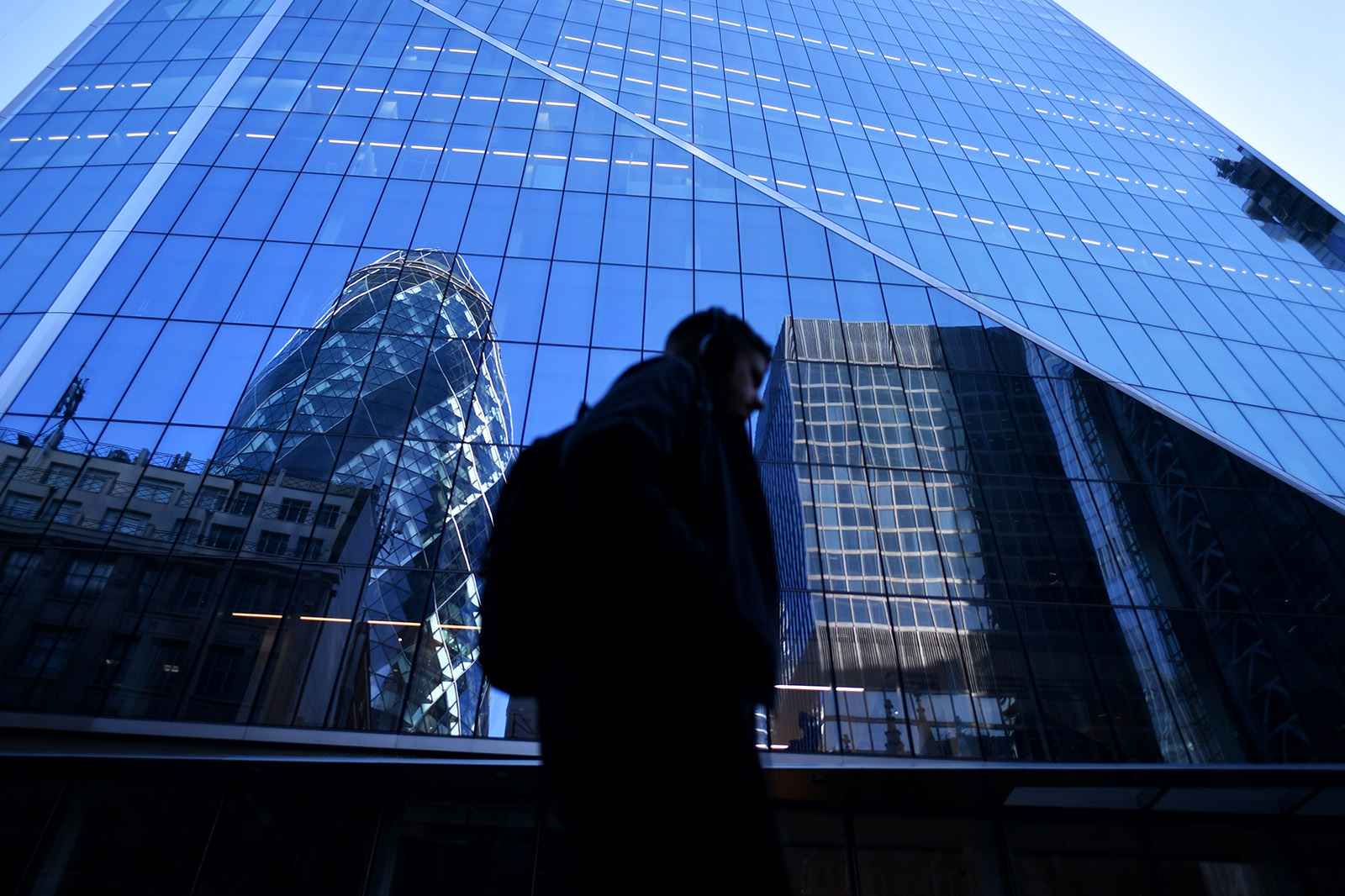 A man walks in the City of London, as England enters a second COVID-19 lockdown. Overall insurance pricing in the third quarter of 2020 in the U.K. increased 34% year-over-year.

Global commercial insurance prices increased 20%, on average, in the third quarter of 2020 as the market continued to firm. It was the twelfth consecutive quarter of increases in the Marsh Global Insurance Market Index, and the largest increase observed since the index’s inception in 2012 (see Figure 1).

All regions, except Latin America (9%), reported double-digit pricing increases, led by the U.K. (34%), Pacific (33%), and the U.S. (18%). Pricing changes in all regions were equal to, or greater than, increases reported for the second quarter (see Figure 2). All regions have now demonstrated eight consecutive quarters of composite pricing increases.

The trend to higher pricing started in late 2017, following a series of events — including catastrophe (CAT) events in North America and Asia — that adversely affected insurer financial performance. Since then, the rate and breadth of pricing changes across geographies and products has increased. Based on current conditions, we expect the pricing environment to remain challenging in most regions and across most products, with the firming market extending through the first half of 2021. 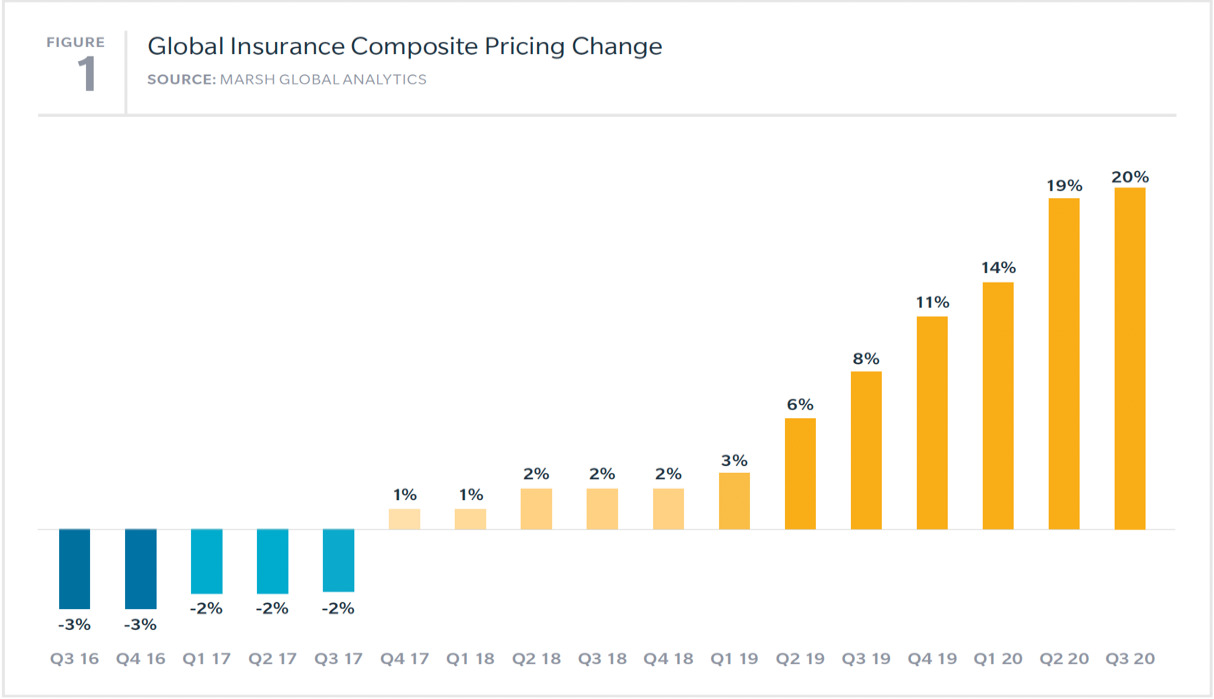 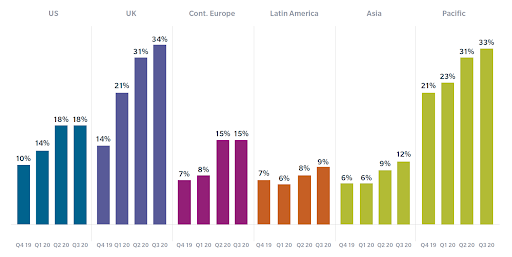 Led by increases in property and financial and professional lines, U.S. insurance pricing in the third quarter of 2020 increased an average of 18%.

Property pricing in the U.S. has now increased for 12 consecutive quarters, and was up an average of 24% in the third quarter — with 85% of clients experiencing an increase. Many organizations altered their insurance programs to offset or limit pricing increases — more than 15% of clients increased retentions and more than 20% reduced limits.

Financial and professional liability insurance rates in the U.S. increased an average of 28% in the quarter, driven by D&O pricing, which was up more than 50%. More than 90% of clients experienced an increase. Overall pricing increased despite the trend toward higher retentions and reduced limits.

Cyber insurance pricing increased 11%, on average; more than 15% of organizations increased their limits on cyber coverage.

Casualty pricing in the U.S. increased an average of 8% in the third quarter. Large and complex umbrella excess risks continued to see the most significant increases, generally ranging from 30% to 60%, although some experienced higher increases.

Overall insurance pricing in the third quarter of 2020 in the U.K. increased 34% year-over-year — the twelfth consecutive quarter of pricing increases. Pricing movement was driven by financial and professional lines, which was up 67%, on average, and property, which increased 20%.

Public company D&O continued to drive overall financial and professional lines pricing, with increases as high as 100%. More than 40% of clients adjusted policy structure — including retentions and limits — to help offset price increases. Economic uncertainty due to COVID-19 added to the challenging environment.

Cyber pricing increased 17%, on average, driven by increased frequency and severity of claims. However, capacity remained readily available, and many organizations increased coverage/limits.

Property pricing in the U.K. increased 20%, on average. Insurers tightly managed available capacity and continued to scrutinize risk improvements. Exclusions continued to be a concern in relation to COVID-19.

Casualty pricing in the quarter increased 6%, on average, the fifth consecutive quarter of increase.

Insurance pricing in the third quarter of 2020 in Asia increased 12%, year-over-year.

Property insurance pricing rose 18% in the region, on average. International insurers pushed for increases across Asia, while domestic insurers remained somewhat insulated from global losses and were competitive in comparison.

Casualty pricing increased by 1%, on average, remaining stable as it has for three years. Pricing may be starting to show early signs of increasing in Korea, Hong Kong and Singapore.

Financial and professional lines pricing in the region rose 18%, on average — the sixth consecutive quarter of increase and the largest observed in several years. A reduction in capacity, particularly from global insurers, contributed to pricing increases. U.S.-listed companies were most affected by D&O pricing increases, which were as high as 100%.

Til Schuermann Partner and Co-Head of Oliver Wyman’s Risk & Public Policy Practice
URL: https://www.brinknews.com/global-insurance-pricing-jumps-in-third-quarter/
Get ahead in a rapidly changing world. Sign up for our daily newsletter. Subscribe
​​