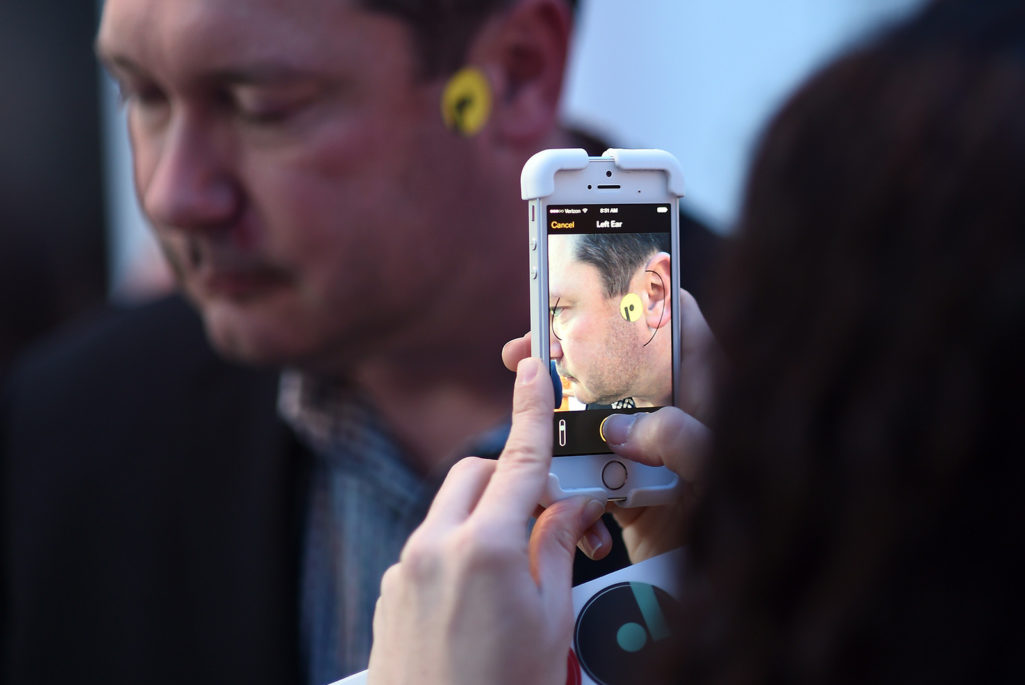 An employee of Normal, a headphone making company, takes a picture of a man's ear to build a customized headphone to be made by 3D printers. At Normal, consumers can use a mobile app to photograph their ear, transmit the shots to the New York startup's 3D printing facility and then receive individualized earphones within 48 hours.

A decade ago, Thomas Friedman’s The World is Flat popularized globalization as a process where Apple, Dell, IBM, and other giant corporations offshored manufacturing to low-cost economies, and outsourced parts and components from suppliers around the globe. China became the world’s factory, mass-producing computers, clothes, and gadgets for U.S. consumers. Southeast Asia prospered as China’s parts warehouse.

The flat world lens, however, is no longer prescient.

Disruptive digital technologies—the cloud and digitization, ecommerce, 3D printing, big data, holograms, Internet of Everything, and virtual currencies—are revolutionizing the economics of global trade and production. They are empowering corporations to dramatically cut costs and encouraging even the smallest of businesses to engage in trade. But the emerging global digital economy is at risk: It lacks the liberalizing policies of the Flat World. Rather, digital protectionism is on the rise. How to tackle it?

Next Era of Globalization

In the coming decade, globalization will change in three fundamental ways.

First, the patterns of trade will change. Trade is less about the movement of physical goods across borders and more about bits: digital goods, designs, and data. The growth driver of trade in the Flat World, trade in parts and components will be made up of electronically shipped designs of 3D-printed products where they be will assembled into final products in automated manufacturing plants near the end-consumer. Flat World’s hallmark, regionalized production hubs in East Asia, North America, and Europe are transforming into virtual and genuinely global supply chains—yet ones that are no longer than the distance between designer and laptop.

Second, the participants in globalization will diversify. Emerging technologies such as ecommerce, 3D printing, and virtual currencies dramatically lower the costs for the still-marginal participants in the global economy—garage entrepreneurs and small businesses—to become global designers, international brands, multimarket exporters, and even one-person multinationals running their own supply chain. The cloud compounds these opportunities. Instead of buying massive IT systems, small businesses can now rent cloud-based, pay-per-use services. For example, Etsy, the online marketplace for handmade goods, rents hundreds of Amazon computers every night to analyze big data from a billion monthly views of its website, receiving next-morning data of the types of clothes, furniture, and jewelry that interest users.

Massive new market opportunities open when the four billion non-Web users log on in the next decade.

On the demand side, individual consumers, rather than corporations and retail chains, are directly in charge of globalization: distribution channels now lead straight to end-consumers leveraging their laptops, tablets, and phones to purchase goods and services. Massive new market opportunities open when the four billion non-Web users log on in the next decade.

Third, the efficiency and predictability of trade and production will improve. The emerging technologies help streamline production, upgrade customer contact, and shed slack. Mid-size manufacturers from industrial equipment to chemicals and waste management are adopting 3D printing, setting up their own online stores and e-billing systems, listing as suppliers on Alibaba, and accepting Bitcoin. Corporations like GE and Ford are 3D printing jet and car parts right where they are assembled into final products, escaping the heartburn of running global supply chains and just-in-time inventories. Mega-retailers like Walmart and Amazon are tapping into the explosive growth of cross-border ecommerce, serving customers in countries where they don’t have a physical footprint. Efficiency gains will expand further as the world’s one trillion devices get connected to the Web: so far, “only” one percent, or 10-15 billion, are connected .

Risks in the Digital Economy

The digital economy opens great opportunities for businesses to streamline, scale, and trade. At the same time, it is fraught with risk.

The Flat World was empowered by good policy—drastic tariff cuts and removal of stringent restrictions on foreign investment in the emerging world and post-communist bloc. The global digital economy has no equivalent. Instead, protectionism is on the rise.

Data is the digital economy’s guarded crown jewel. Europeans are imposing limits on access to consumer data and its transfer across borders, complicating foreign companies’ customer service and marketing. Keen to create new jobs, such emerging markets as Brazil and Vietnam are forcing foreign IT companies to locate servers and build data centers as a condition for market access, a policy that costs companies millions in lost efficiencies. Leading governments are scrambling to prevent protectionist barriers on 3D printable designs.

IP protections too are inadequate for the digital era—why couldn’t a company in China simply replicate digital products and 3D printable designs made in the U.S.? The emerging patchwork of national rules on virtual currencies risks territorializing what could be a one-world money. Existing models for cross-border payments, customs procedures, and distribution and logistics are outdated, too. They are designed for big business that steered the Flat World, not for the digital era or its new players with limited capacities to pay high fees, meet complex regulations, or ship in bulk.

Just like tariffs that splintered the world in the 19th century, digital protectionism risks balkanizing the global digital economy before it even starts, squashing the potential of hundreds of millions to prosper in the global economy, and derailing relations between nations. Forthcoming U.S. trade deals help address the gaps, but broader international coordination is missing. The World Trade Organization is too burdened and politicized to be effective.

In the early 1990s, the Washington Consensus set off a wave of deep trade and investment liberalization across the developing and post-communist world, paving the way for the Flat World. Now it’s time for Washington Consensus II—perhaps better, a Seoul Consensus to celebrate Korea’s rapid ascent to a leading digital economy—among thought-leaders, governments, international organizations, and think-tanks that would set guidelines for nations’ behaviors in the global digital economy.

A Seoul Consensus would focus policymakers’ minds, guide international organization’s policy and technical assistance work, and empower watchdog groups to keep governments’ feet to the fire. It could be backed by a Digital Trade Organization structured much like the OECD—as a forum for dialogue, codes of conduct, independent data gathering and analysis, as well as bottom-up, real-time discussion and feedback on the barriers that companies and consumers face in the digital economy.

Dialogue and transparency won’t necessarily prevent bad policy, but they are a critical start. No country wanting its companies and citizens to prosper in the 21st century would boycott.