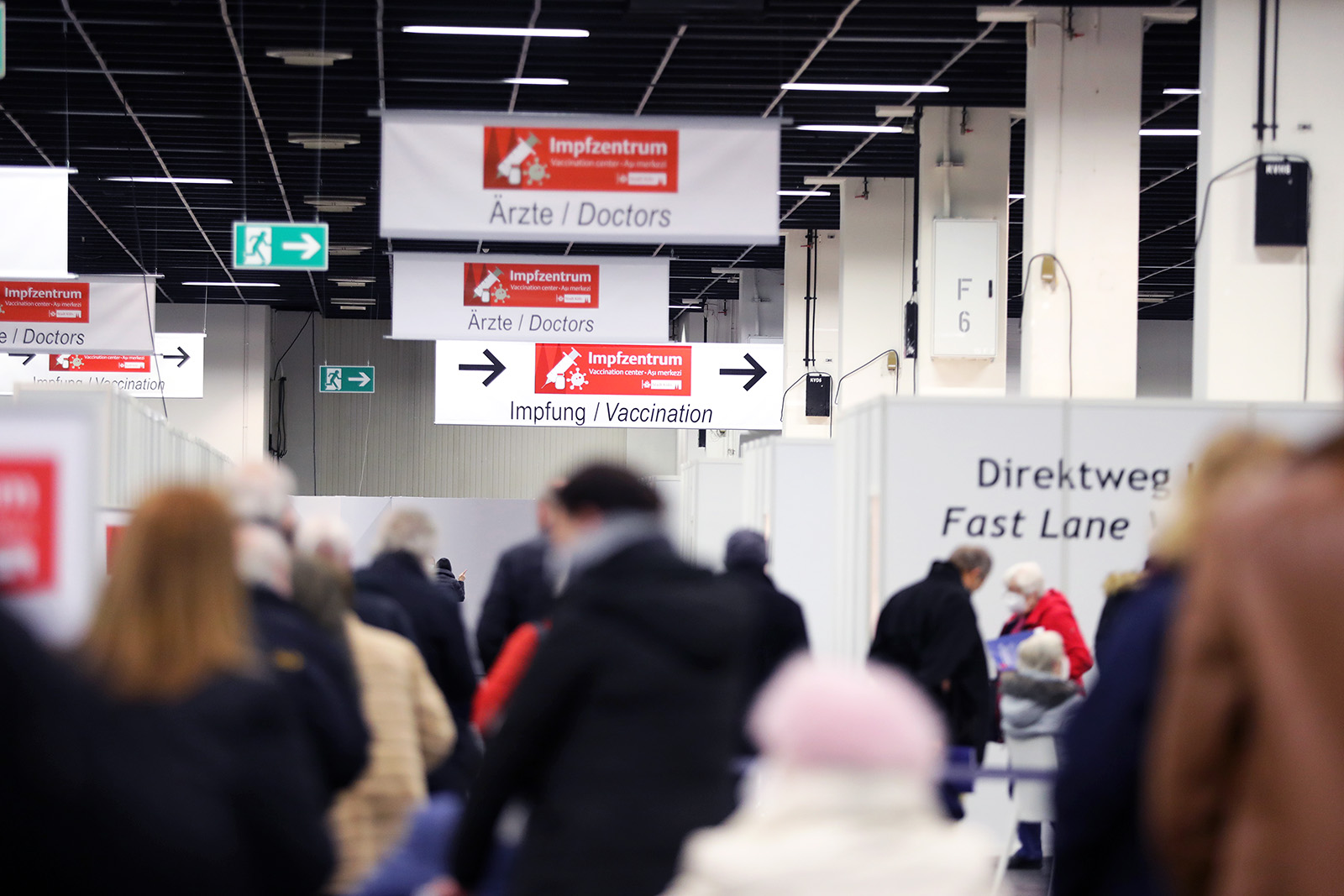 Senior citizens queue up for vaccination against COVID-19 at a vaccine center in Cologne, Germany. Reactions to a slow rollout in the EU were particularly negative in two of the biggest European countries — Germany and the U.K.

President of the European Commission Ursula von der Leyen is trying her best to limit the damage caused by the COVID-19 vaccination debacle. She recently faced the European Parliament, pledging that things would get better and vaccination across the union would speed up in coming weeks.

It will be difficult to fully restore her credibility as long as vaccination in Europe continues to lag behind the U.S., U.K. or Israel. Some mishaps even suggested sheer panic when Von der Leyen noted that another commissioner proposed limiting vaccine exports from the EU into third countries, such as the U.K.

Understandably, critics of the Brussels institutions paid close attention. However, across Europe chancelleries refrained from openly criticizing the Commission, conscious of what is at stake:

In fact, the public reactions to the slow start of the vaccine rollout have not been uniformly negative across the EU. Some public opinion, notably in Italy, primarily focused on national bottlenecks, rather than the slow vaccine rollout at EU level. Reactions were particularly negative in two of the biggest European countries — one inside the union, Germany, and the other outside, the U.K.

Perhaps for the first time after Brexit and the end of the transition period, the U.K. government demonstrated foresight and decisiveness. It clearly helps politically when you can paper over the disadvantages of leaving the EU while the other side drops the ball on an important challenge, such as COVID-19.

The Backlash in Germany

The picture in Germany is more complicated and potentially more worrisome for supporters of the EU.

The political campaign in Germany is likely going to be dominated by the fight against the pandemic and the economic recovery.

Chancellor Angela Merkel has tried hard to steady the ship and maintain support for a European approach to COVID-19 in her own country. However, the long lockdown is eroding support for the government’s handling of the pandemic. As a consequence, defending the European spirit behind the vaccine rollout has become more difficult.

Jockeying Is Underway to Be Chancellor Merkel’s Successor

Managing the COVID-19 crisis is becoming part of the political campaign that is slowly gathering pace in Germany — ahead of the general elections in early fall. Chancellor Merkel is entering her lame duck stage, especially now that her party has selected a new head of the Christian Democrats (CDU), the moderate Armin Laschet.

Since it is still unclear who should become the conservative candidate for chancellorship, however, potential successors are jockeying for pole position. The fight currently boils down to a rivalry of two, pitching the moderate Armin Laschet against the head of the Bavarian sister party, Markus Soeder.

The Bavarian party is giving in to the temptation of criticizing Brussels for everything that is making Germans increasingly edgy in the fight against the pandemic. Soeder is using a familiar stance that his party also followed during the euro crisis: Make Europe the scapegoat whenever it is convenient, and by doing, so try to keep the far right at bay.

How the Vaccine Rollout Plays Into the German Election

German politicians are realizing that the end of the COVID-19 health emergency could coincide with the general elections, and the political campaign is likely going to be dominated by the fight against the pandemic and the economic recovery.

Add to the mix the fact that the president of the EU Commission is herself a German politician. In the absence of a clear front runner, Ursula von der Leyen could even be considered a potential candidate for chancellorship. However, her domestic political career is not without controversy. As minister of defense, she was embroiled in a scandal involving inflated expenses.

Suddenly, the failures in organizing a flawless EU vaccine rollout look increasingly like a very domestic political squabble within the conservative camp. Clearly, the authority of Chancellor Merkel at home is waning, and the consequences are going to be felt across Europe.

With discussions on how to spend 750 billion euros ($905 billion) of the recovery fund that hasn’t started, it is only natural to expect some rough waters ahead. Conscious of the stakes, one EU country decided to deploy its best weapon in times of crisis. Italy called on the former president of the ECB, Mario Draghi, to steer the country through the difficult times ahead. His role will no doubt also include taming the worst instincts of some German politicians, should it become necessary.

Til Schuermann Partner and Co-Head of Oliver Wyman’s Risk & Public Policy Practice
URL: https://www.brinknews.com/how-slowdown-in-eus-vaccine-distribution-will-impact-the-german-election/
Get ahead in a rapidly changing world. Sign up for our daily newsletter. Subscribe
​​