How We Digitize Finance Will Reveal Society’s Values 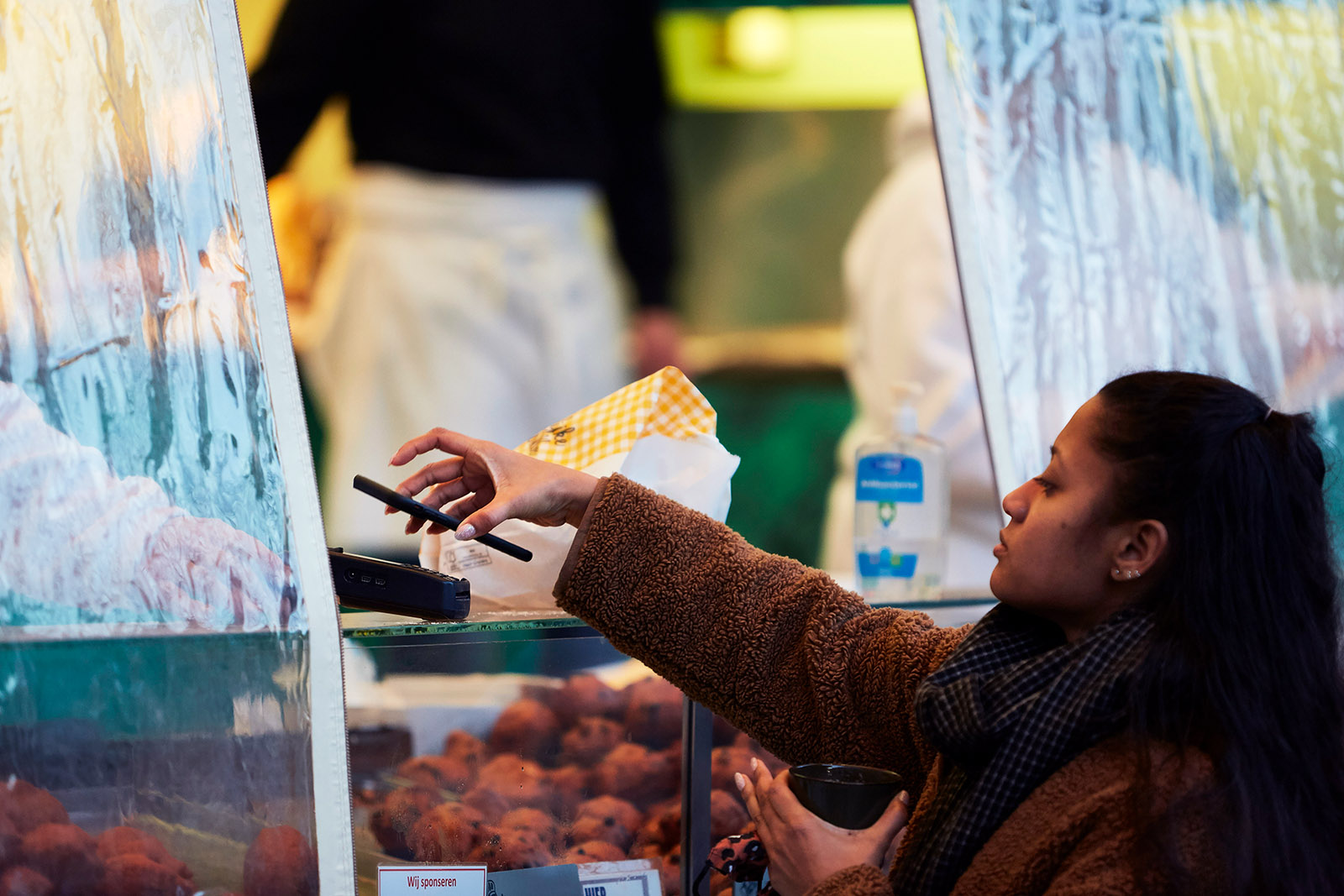 A client uses contactless pay with her smartphone in The Hague, Netherlands. More than 80% of small and micro businesses around the world updated their ability to accept digital payments last year.

The coronavirus pandemic has accelerated the take up of digital technology across the economy, and few areas are changing as quickly as money itself. U.S. e-commerce sales jumped by 44% in the second quarter of 2020, according to the Atlanta Fed, while a Visa survey found that more than 80% of small and micro businesses around the world updated their ability to accept digital payments last year. Nearly 90% of central banks surveyed by the Bank for International Settlements are actively researching the potential for digital currencies.

These innovations can offer convenience, speed and security, says Alex “Sandy” Pentland, a professor at the MIT Sloan School of Management. But they also require some tough decisions about privacy and anonymity and what controls the authorities should retain to monitor activity and combat fraud.

Whether we conduct commerce in dollars or bitcoin or digital renminbi, he says, we need to realize that people are susceptible to manias that can whipsaw markets and skew the distribution of wealth.

Pentland discusses the outlook and implications for digital finance in the second part of an interview with Douglas J. Elliott of the Oliver Wyman Forum’s Future of Data initiative.

ELLIOTT: You’ve written about digital assets, digital currencies and distributed finance. Can you share your views on those areas?

PENTLAND: We helped several U.S. financial institutions set up Akoya, which uses distributed principles to allow you to move money around without sharing personal data. The previous system was horrible — screen-scraping your information, getting your password.

And we just helped institutions in Switzerland set up the Swiss Trust Chain, which is a blockchain platform for doing what Akoya does, as well as handling medical data and everything else — which is really transformative. Singapore has a similar blockchain, and China has one. These systems allow you to get uniform control over finance, trade and other information on the same encrypted platform. That lets you detect fraud more easily, it lets you manage things much more efficiently — all by looking at patterns in the metadata, because it turns out that you don’t need to look at the underlying data. This is the future that I see.

ELLIOTT: Where do central bank digital currencies fit in the picture?

PENTLAND: Central bank digital currencies would run on the same or similar platforms. Current best practice is to have a multi-level system: The central bank has relationships with the commercial banks, and commercial banks have relationships with you. All of these entities have a copy of the ledger for transactions, and they have permissions to see only certain parts of it. This allows you to get consistency among all parties so that if somebody gets compromised, everybody else says, “That’s not right, my copy doesn’t say that.” That self-healing property means you’re much more robust to attack.

The Chinese version of this very explicitly allows the central bank to see all the way down to whether you bought chewing gum. Other proposals have much more nuance. The central bank sees what the commercial banks are doing but not the details of how they manage the next levels of the ledger, unless there’s a criminal case and a court order.

ELIOTT: Can authorities get the convenience benefits of digital cash without the potential downsides?

PENTLAND: Digital cash is not new, but you can have different types of anonymity. You can make it perfectly anonymous, sort of like Bitcoin, and nobody can tell where the money is going. Countries and tax authorities don’t like that, so I don’t think that’s viable in the long term.

There’s another version where you get a token that you can spend anywhere, but eventually that token has to be deposited in a bank. The authorities don’t know exactly what happened in between, but they know that there was a flow. And there are different versions where the authorities will see some parts of the transactions — the cost, for example — but not other parts, like what you bought. We’re helping people think through these choices to be able to have the ability to avoid fraud and solve crime while not having big changes in privacy and anonymity.

These platforms and digital currencies will reveal the values of each society, such as who should get the long-term value of the digital currency — banks? Citizens? The nation as a whole?

ELLIOTT: Are you looking into programmable money?

PENTLAND: Call it “smart” money. The idea is that financial rails carry a digital token that can have programming about what it will and won’t do. It could pay tax, for instance, but not move outside the country.

This is different than the crazy stuff you see with cryptocurrencies, such as the defi (decentralized finance) stuff like derivatives. The problems with these systems have to do with governance. Libra, the digital currency that Facebook proposed, was extremely good, except for governance.

Libra was virtually identical to a digital currency design we did called Tradecoin. It’s intended to help sovereign wealth funds and retirement funds manage their resources and have secure exchange of value. What’s nice about these funds is they have a 30-year time horizon, and they represent citizens. So, one hopes that when you begin to get digital currencies, the governance has that long-term perspective.

These platforms and digital currencies will reveal the values of each society: How much anonymity is there, what do you have to do to be able to unmask information, who gets to do that and under what conditions? And who should get the long-term value of the digital currency — banks? Citizens? The nation as a whole?

The Data Economy We Need: Local and Distributed

ELLIOTT: How do you handle all of these issues when digital currencies cross borders, where people might have quite different values or priorities?

PENTLAND: Different countries are going to want to have their own control mechanism. Those will be different, and that’s OK. I think that there will be a Darwinian competition: The ones that do well will survive, the other ones will have to learn from their errors.

Consider, for instance, the internet. Every country has their own networks and slightly different ways of regulating them, but they all need interoperability. It is the internet after all.

What you need with digital currencies is a way to transfer value from one ledger to the other. You’re going to get the “inter-ledger,” and it will have gateway mechanisms for moving from one territory to another. When I move from one digital currency to the other, I can build in programmable hedging. Suddenly, you can get world-class hedging that is stable across the entire ecosystem at essentially no additional cost.

ELLIOTT: Across the range of things you focus on, what is the biggest misconception you have to keep dealing with?

PENTLAND: Two things. One is this notion of the rational individual. The models we have for governance assume everybody’s an individual making their own decisions, and they’re all independent and somewhat rational. That’s not true. Most of our decisions are made through social constraint and by learning from others. When people influence each other, you can get cascades of behavior, a type of distribution that has very long tails — like in 2008.

The other thing is this notion of ergodicity. People say, “Here’s a good bet, everybody should do this,” and they give examples such as home ownership. But in fact, such investments are only good on average. Lots of people will have a string of bad luck, and they’ll come out badly. That’s at the root of a lot of inequality.

All of our policy is based on the average — that’s an equilibrium model. It’s based on individuals as opposed to networks. Those are some of the most salient and deepest problems.

In the first part of this interview, Sandy Pentland discussed how data cooperatives can help society unlock the benefits of data while avoiding privacy violations and other abuse.

A version of this piece was originally published on the Oliver Wyman Forum.

Hamza Mudassir Lecturer in Strategy at University of Cambridge
URL: https://www.brinknews.com/how-we-digitize-finance-will-reveal-societys-values/
Get ahead in a rapidly changing world. Sign up for our daily newsletter. Subscribe
​​