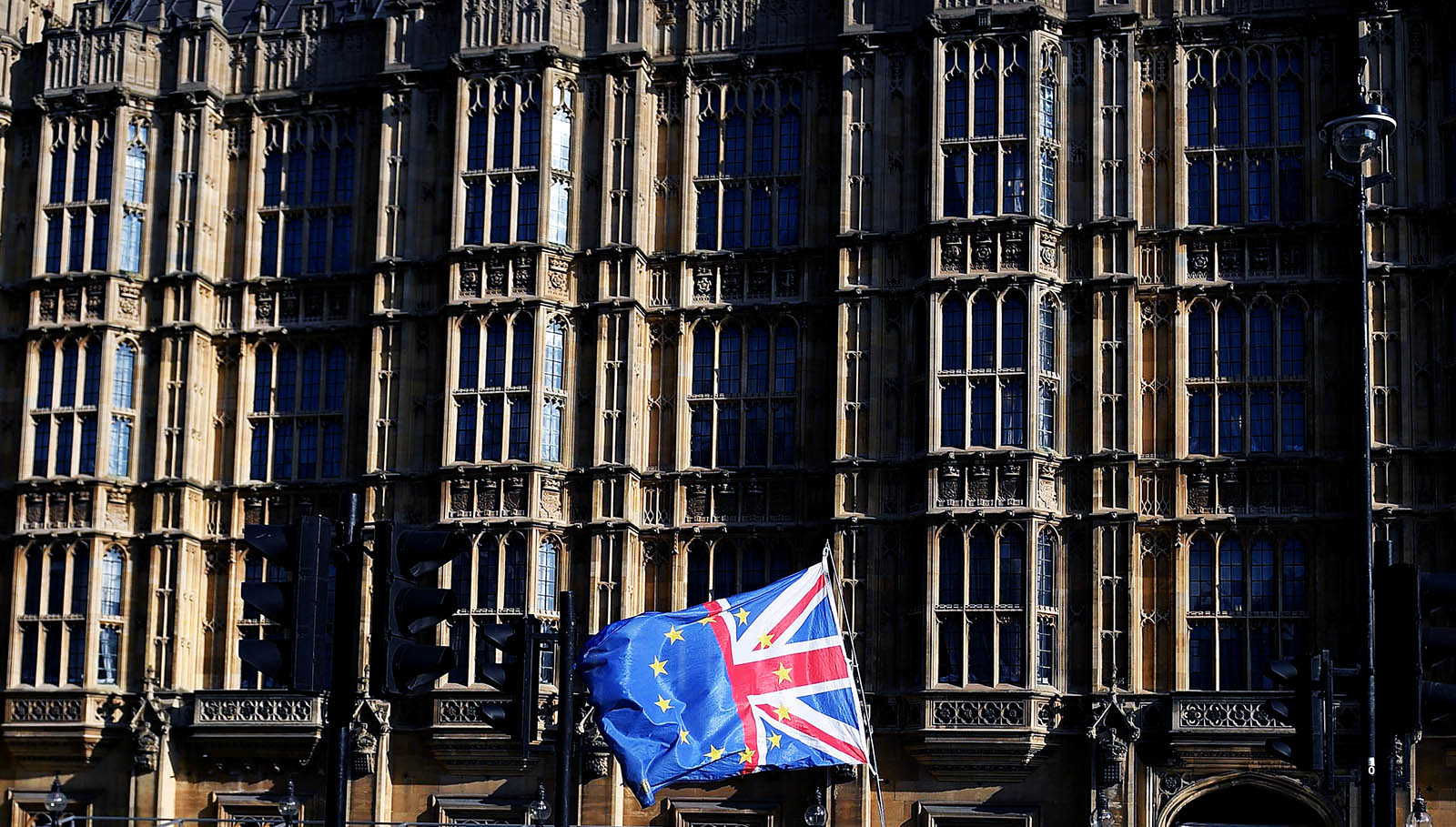 An anti-Brexit activist holds a flag in the colors of both the EU and Union flags as they protest outside the Houses of Parliament in London. Prime Minister Johnson’s first major obstacle will be to negotiate new trade agreements with the EU and the U.S.

The Brexit story has been told and retold countless times in political terms — but now comes the economic and social reality. U.K. Prime Minister Boris Johnson led the Conservative Party’s sweeping victory last month with a campaign to leave the European Union by January 31, but in practical terms, Brexit is just starting.

Free trade agreements with the EU and U.S., the future of London as a financial center, the impact for companies and people, and the real, day-to-day changes in the country’s business climate are all still up in the air.

Caroline Atkinson, former deputy national security adviser for international economics to President Barack Obama and former head of global policy for Google, joins the Altamar podcast team of Peter Schechter and Muni Jensen to explain the complex economic, financial and business ramifications of Brexit. Ms. Atkinson has also held senior roles at the International Monetary Fund, the U.S. Treasury Department and the Bank of England and worked as a journalist for The Washington Post, The Economist, and The Times of London.

What Will a Trade Agreement With the EU Look Like?

Prime Minister Johnson’s first major obstacle will be to negotiate new trade agreements with the EU and the U.S.

Ms. Atkinson questions what standards various industries will implement and what the EU will accept.

The Future of the City of London

Brexit also has the potential to profoundly change London as the world’s global financial center as it isolates itself from Europe’s markets.

“Many people think that the ECB [European Central Bank] and the EU will not allow a certain core element of Euro transactions to take place in London, even if there is a backing off from ‘Singapore on the Thames,’” says Ms. Atkinson, “The ECB will not want to be in the position of bailing out institutions that are located in London.”

It’s hard to imagine now, though, as she states, “maybe there won’t be a truly global financial center in Europe, because there isn’t another alternative” that can match its financial markets and global reach today.

Ms. Atkinson explains how Brexit will affect London as a global financial center.

The Chances of a US-UK Trade Agreement

As far as simultaneously negotiating a trade agreement with the Trump administration, Ms. Atkinson explains that it is “overly optimistic to think of having a U.S. trade deal … in any short timeframe.”

Sorting out the terms of a deal is further complicated by the fact that the U.S. and the U.K. have different regulations and standards across the supply chain for everything from chicken to finance. “There are very deep supply chains: Fresh food is one thing, manufactures are others. These would get pulled apart if you had a deal that did not incorporate some recognition of mutual standards,” she says.

At the end of the day, the question of how Brexit will change the U.K. in real terms will depend on how close the country remains with Europe as it shapes its new economic reality.

“Normally, when you’re negotiating relations between countries and a trade deal and a services deal, you start from two different places and you decide how much to converge,” says Ms. Atkinson, “in the case of the U.K. and Europe, you’re starting from being together and you’re wondering how much to diverge.”

The realities of a hard split could change the feelings of Britons: “Every bit of divergence, especially if it comes suddenly, will make it harder for people in the U.K. to do the trading and work in Europe that they’ve done before,” she says, “So, I would bet that [Prime Minister] Boris Johnson will try to limit any divergence.”