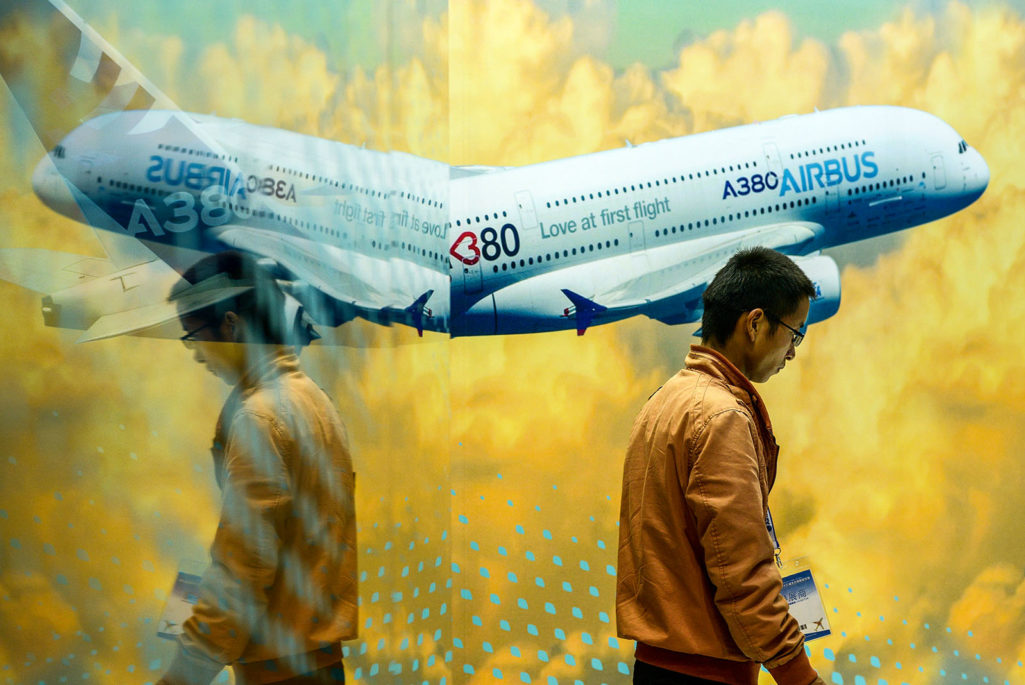 A man walks past an Airbus A380 poster at the Beijing International Aviation Expo in Beijing. China is expected to add more than 6,300 new aircraft to its commercial fleet by 2034. China’s airlines are part of the ‘New China’ group of industries driving the next phase of its economy.

Chinese debt is a hot topic right now, competing with the likes of Brexit and presidential hopeful Donald Trump to play the role of boogeyman for global investors. It’s hovering in the peripheral vision, a risk that is worrying but difficult to assess.

But numbers can be deceiving (particularly averages), and investors would be wise to look into the details if they want to avoid the devil.

Sticking with the sample of 3,000, we found that, while less indebted than global peers, Chinese companies are having a harder time paying the interest on corporate debt, primarily due to weak revenues in a slowing economy, riddled with excess capacity and inefficient assets. These Chinese companies also have much more short-term debt on the balance sheets, meaning they will need to pay off—or more likely, roll over—loans sooner.

Under such a scenario, investors may be tempted to stick with the largest Chinese companies as the most stable, but once again, a poke into the numbers gives cause for more caution in one’s asset allocation.

We split out the 100 largest companies from our sample and found these to be the most vulnerable of the lot, with much higher leverage and less ability to pay interest on their loans. This is particularly true of the private sector, which is dominated by highly leveraged real estate companies, a full third of which have insufficient earnings to pay the interest on their debt load.

What about state-owned enterprises then? Could they provide a safe haven? It is true that, with their explicit or implicit government guarantees, they enjoy longer loan terms from banks than their private-sector brethren. As New China emerges, state-owned enterprises (SOEs) are, by and large, still stuck in the past. Broken down by assets, almost 80 percent of SOEs are in “old industry” sectors such as infrastructure, chemicals and energy, compared with 65 percent of companies in the private space.

If investors do want to stick with SOEs, they would be advised to go big, as the smaller- and medium-sized among them are, in general, more leveraged and less able to pay their interest. The picture is reversed in the private sector, however, where the largest companies are generally weaker because of the real estate dinosaurs.

Real estate—the New China of yesteryear—is joined by the largely state-owned sectors of infrastructure (chiefly construction), materials, metals and chemicals as the worst of the bunch. Here, overcapacity reigns, profit margins are withering and companies are struggling to pay their interest, even as debt continues to pile up.

Airlines have a lot of debt, at almost three times their equity; however, this is the industry norm worldwide, while the Chinese players enjoy longer loan terms than their global peers (they are largely state-owned) and are more profitable. They are also in a growth market, as more and more Chinese enter the middle class and start to take vacations.

In a similar vein, tourism-related companies, which are mostly from the private sector, are generally sound. A worrying 20 percent of them are what I term “zombies”—companies unable to pay their debt from earnings—but on the whole, they are more profitable than their global cousins, with manageable debt levels at 60 percent of equity.

Our star performer is health care, where profit margins of 12 percent far outstrip the global average of 8 percent, and debt is less than 50 percent of equity, compared with almost 120 percent globally. Short-term liabilities are high, at 86 percent of total liabilities—as banks are less willing to lend long term to this sector of young, mostly private enterprises—but more than 97 percent of the companies are able to pay their interest from earnings.

The significant divergence in debt levels and corporate health in China can be traced back to the four trillion yuan stimulus package of 2008-2009, when the government pulled out all the stops to save the economy, flooding the country with credit that washed largely into the old industry firms. These companies did what they were expected to do and grew rapidly, using the cheap money to expand production capacity that had little use once demand faded away with the stimulus package.

The New China sectors, by contrast, were largely overlooked in 2008-2009 credit binge, explaining their lower debt levels today and the relative health in the supply demand balance of their industries. The soundness of these New China sectors is certainly reassuring, implying that the economic drivers of China’s future have fuel in the tank and a clear road ahead; however, these sectors are still far too small, accounting for just 27 percent of companies by assets, compared with almost 50 percent for the same sectors globally.

To put the scale of the challenge in context, our top three New China sectors, identified above, account for just 3 percent of total assets in our sample, while the worst three Old China industries account for a whopping 43 percent. The road to New China is a long one, indeed.

To make matters worse, China’s central bank is now embarking on a new credit spree, employing ultra-lax monetary policies that have resulted in new loans in China passing a breathtaking 4.5 trillion yuan in the first quarter of the year, equaling the record set during the height of the last stimulus package in 2009. It is the dinosaurs that are once again hogging the punch bowl, with new loans to real estate hitting 1.5 trillion yuan in the first three months of 2016, almost double than at the peak of the 2009 binge.

Large companies are the major employers in China and the government is clearly intent on preventing serious defaults and the instability these would bring. While monetary and fiscal stimulus may ease the symptoms for these old industries, more cheap credit will only make the eventual restructuring that clearly beckons even more painful. Meanwhile, buying time for the old sectors pushes the coveted rebalancing out into the future, making the dream of New China ever more elusive.

Chris Miller Associate Professor at the Fletcher School at Tufts University
URL: https://www.brinknews.com/old-china-bad-new-china-good-growing-divergence-in-chinese-corporate-health/
Get ahead in a rapidly changing world. Sign up for our daily newsletter. Subscribe
​​