Regulatory Uncertainty: Bad for Business and Here to Stay 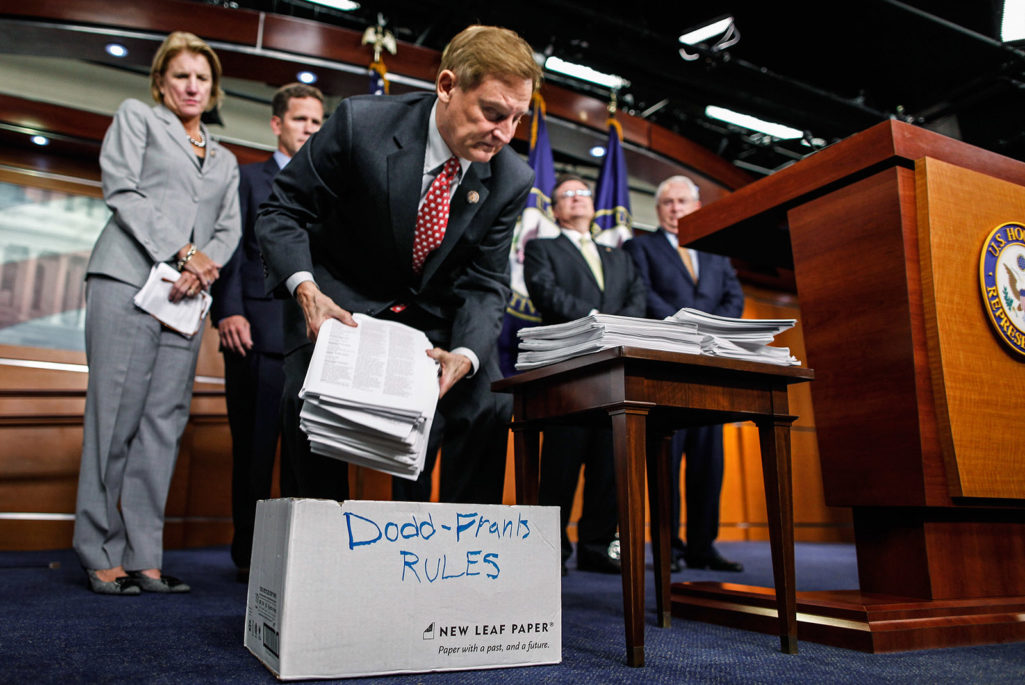 Former House Financial Services Committee Chairman Spencer Bachus (R-AL) lifts copies of what he calls the 'rules' section of the Dodd-Frank financial reform bill out of a box during a news conference to discuss the impact of the bill September 8, 2011 in Washington, DC.

There’s no shortage of financial risk around the world—in China, across southern Europe, and now even Brazil. Regulations enacted by the United States and other nations after the 2008 financial crisis were designed in part to prevent these crises from spreading beyond their national borders.

The problem is, the new global financial regulations are now their own form of risk.

The growing thicket of financial regulations at home and abroad are making compliance burdensome and costly for companies. New regulations often have little to do with business realities and are little more than scut work for staff and legal counsel. Regulators implement these new rules with little coordination across geographical boundaries, increasing compliance challenges for multinationals. And some rules—like many called for in the Dodd-Frank Act—have yet to be implemented, creating even more uncertainty.

The onslaught of new financial regulations is increasingly affecting corporate earnings. According to research by the Association for Financial Professionals (AFP), “regulations” were the third largest driver of earnings uncertainty in 2015, behind “business operations” and “financial.” Regulations rank second for businesses with less than $1 billion in annual revenues, which is no surprise, given that smaller firms usually have fewer compliance staff and resources.

The alphabet soup of financial regulations may be obscure to consumers. But to corporate treasurers, chief financial officers and their staff and colleagues, acronyms like “KYC,” “EMIR” and “FATCA” are all too familiar.

New global financial regulations are now their own form of risk.

One particularly nettlesome regulation is the Report of Foreign Bank and Financial Accounts—better known as FBAR. Introduced in 2011, FBAR verifies the identity of a person with signature authority over a foreign financial account. Ensuring that bad guys aren’t opening bank accounts abroad to finance attacks on the U.S. is a worthy goal, but complying with FBAR is a nightmare. For example, who needs to fill out a FBAR if a company is a Fortune 500 business with offices and bank accounts in multiple countries and cities around the world? Filling out FBAR forms and verifying the information costs tens of thousands of dollars per year, treasurers and CFOs tell AFP. Individuals who don’t fill out FBARs face $10,000 fines.

Outside U.S. borders, the regulatory environment is no better. Basel III capital requirements, designed to ensure banks maintain sufficient liquidity, may serve their purpose all too well. That’s because higher capital requirements mean less funds are available for business lending in regions that badly need investment. And Basel III could kill a favorite accounting technique for corporations known as “notional pooling.” This practice lets multinationals maintain multiple accounts in multiple countries with the same bank and helps them avoid unnecessary fees and complicated transactions like intracompany loans. Many say Basel III could eliminate notional pooling. And that’s the problem: businesses don’t know for sure, because the regulation is vague, and no one wants to be the test case.

Perhaps no bigger regulatory headache for businesses is the maze of corporate tax rates. America has the highest rate at 35 percent in the developed world, leading multinationals to park $1.3 trillion in earnings overseas rather than repatriate it.

This fall marks the seventh anniversary of the start of the Great Recession. Nations have moved on. Regulators have moved on. But their regulations are here to stay. Hopefully, they will not have as lasting a negative impact as the financial crisis that inspired them.

Til Schuermann Partner and Co-Head of Oliver Wyman’s Risk & Public Policy Practice
URL: https://www.brinknews.com/regulatory-uncertainty-bad-for-business-and-here-to-stay/
Get ahead in a rapidly changing world. Sign up for our daily newsletter. Subscribe
​​