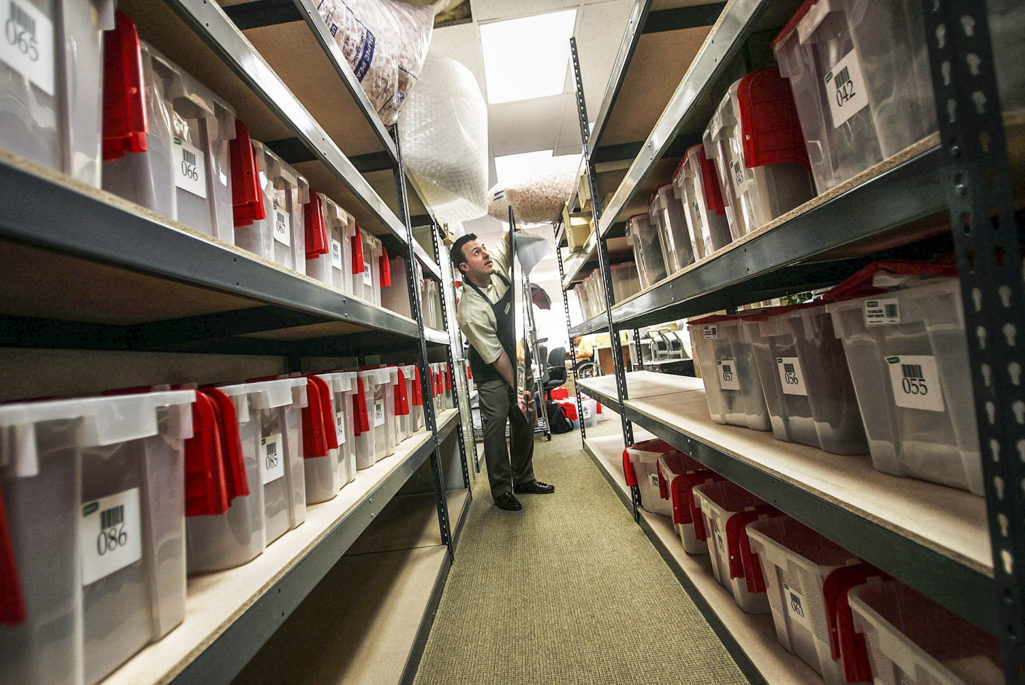 Matthew Johnston, General Manager of a branch of iSold It, organizes items in the storeroom December 13, 2004 in Huntington, New York. iSold It, a fast-growing chain of eBay-affiliated drop off stores, allows people to sell goods on eBay by dropping them off at an actual store.

Across America, individuals and small businesses are increasingly buying and selling goods and services online. According to U.S. Census Bureau, the total online transactions in the U.S. grew from $3 trillion in 2006 to $5.4 trillion in 2012, to about a third of U.S. GDP. Increasingly, these transactions are cross-border: the United States is the world’s most popular market for the world’s ecommerce shoppers, and itself has 34 million online shoppers that buy from abroad.

Behind these trends are the previously marginal participants in trade—small businesses, entrepreneurs, and consumers that transact with foreign buyers and sellers online. Ecommerce drastically lowers the costs for these small buyers and sellers to be visible and transact with each other. It is no accident that 97 percent of U.S. sellers on eBay also export, multiples of the 1 percent of brick-and-mortar companies that export.

Yet the rise of ecommerce creates new risk scenarios and considerations for customs agencies—in particular, what security frameworks ought to look like in a world where millions of businesses and individuals around the world increasingly engage in billions of micro-transactions, often resulting in shipments of small parcels from small businesses to other small businesses or individual consumers.

On the one hand, the rise of small players in trade makes risk appear fragmented and amorphous—a scenario that might tempt customs agencies to saddle small businesses with additional paperwork and disclosure. On the other, given small businesses and individuals have limited capacities to meet complex trade regulations, there is a need for streamlined, low-cost trade compliance and customs procedures.

How can we overcome the tension between two desirables—securing our borders and facilitating small business trade—in an increasingly digital world?

So far, customs security regimes around the world have been tailored to the patterns of traditional trade: Large, regular trade volumes shipped by large and mid-size companies that are relatively easy for customs agencies to monitor for risk, and which are staffed to comply with trade rules. Customs regimes are not designed to measure risk or accommodate small enterprises and consumers, whose trade is more sporadic and trade compliance capacities limited. While the U.S. government and governments around the world have fashioned Trusted Trader and Authorized Economic Operator (AEO) programs to fast-track low-risk companies’ trade, these programs’ criteria are extremely challenging for small businesses to meet. In other words, today’s customs security frameworks do not match up well with the emerging breed of traders.

Today’s customs security frameworks do not match up well with the emerging breed of traders.

A recent policy paper from the Center for Strategic and International Studies outlines a plan to fill this gap. It recommends an 18-month pilot program “eTrade Track,” a comprehensive initiative run by U.S. Customs and Border Protection (CBP) to secure and fuel small business and online trade. eTrade Track consists of five main components:

The eTrade Track is a low-cost pilot that would start providing customs with visibility into the changing landscape of American and world trade. It is a small investment in light of the gains that millions of American consumers and companies stand to gain from increased engagement in international trade.

Marcello Estevão Global Director, Macroeconomics, Trade & Investment at the World Bank Group
URL: https://www.brinknews.com/rise-of-ecommerce-creates-new-risk-scenarios-for-customs-agencies/
Get ahead in a rapidly changing world. Sign up for our daily newsletter. Subscribe
​​