Shaking Italy out of its Slump 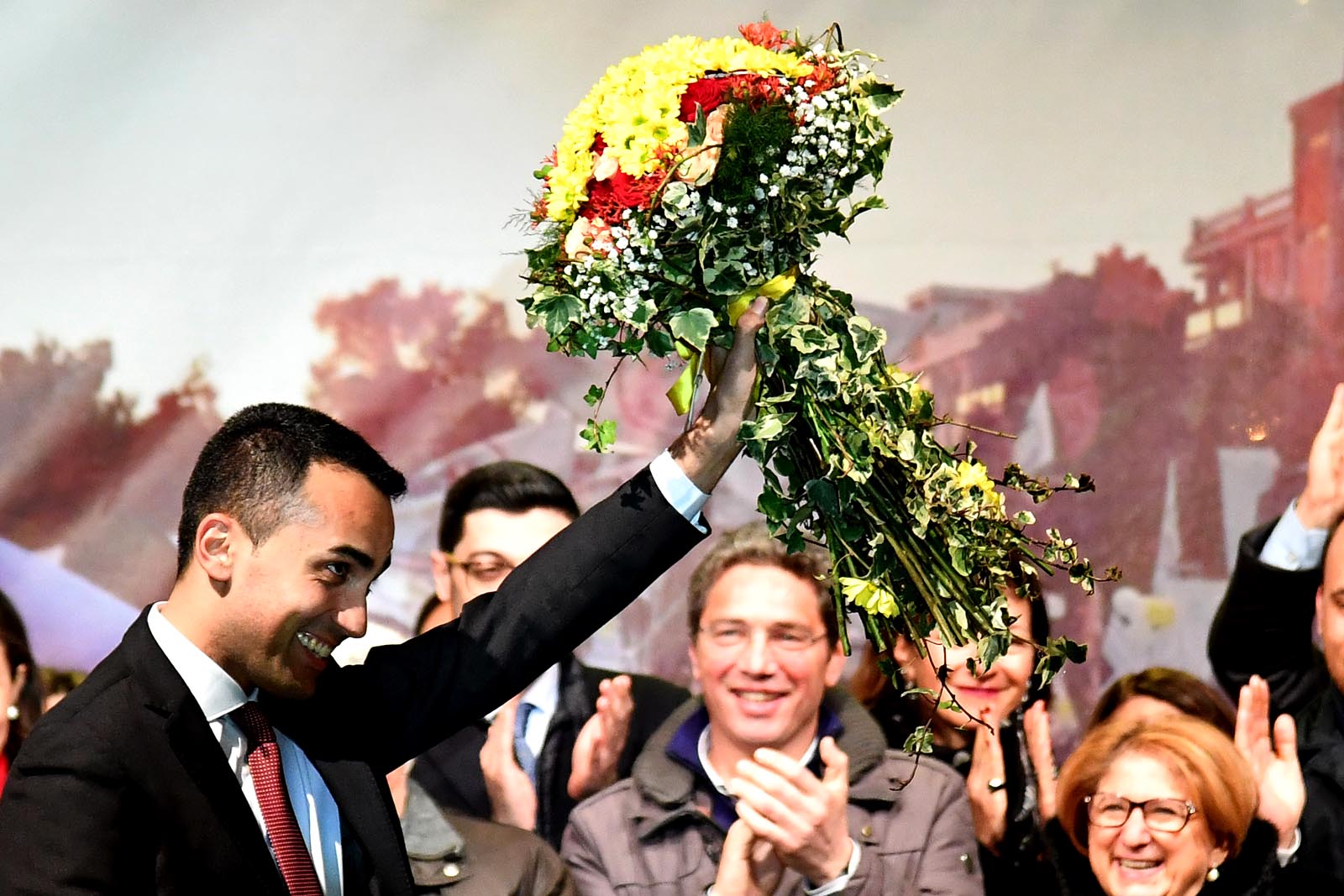 Italy’s election on March 4 was a political earthquake for a country that has been stuck in economic recessions and migration crises for two decades.

The Defeat of the Center

Italians rewarded the opposition parties and sacked the incumbent center-left governing coalition led by Prime Minister Paolo Gentiloni and Democratic Party (PD) Secretary Matteo Renzi. While this outcome was widely anticipated, the extent of the defeat for the PD and the success of the hard right were larger than expected.

The incumbent government forces slumped to a mere 23 percent of the votes (down from 31 percent in 2013), whereas the center-right-wing coalition won the top spot at 37 percent (up six points). This is due to the stunning upsurge in the far-right party, the League, and the 5 Star Movement (M5S), which jumped 7 points to 32 percent, thus becoming the most popular single party in Italy by far.

Neither of the two winning blocs has enough parliamentary seats to form a government on its own. Only the reshuffling of alliances between parties and factions, which have been sourly campaigning against each other, would avoid new elections over the next few months. Despite the historical defeat, the PD’s role will still be decisive. It appears that Mr. Renzi will be soon ousted, thus starting an internecine fight for control between those supporting a center-right government and those who favor an alliance with M5S.

Judging from the first declarations after the vote, it is highly unlikely that parts of the center-right and the M5S would form a government together, as this would endanger the political stability of their respective regional governments and ultimately disrupt their populist and anti-establishment platforms.

The uncertainty on the composition and timeline of the next Italian government is likely to negatively impact Italy’s economic outlook, and it could even jeopardize the stability of European financial markets, curtailing much-needed EU policy reform efforts.

At the same time, shaking off this stalemate could be a significant opportunity for structural change in Italian politics if the two half-winners of this election, the League and M5S, can work out a tactical accord to change the voting system to create an effective two-party system. Only in such an instance could further elections provide a clear winner with substantial public support to deeply reform Italy’s economic policy.

The post-Cold War years have been disastrous for Italy’s economy and political system. The combination of internal weakness caused by former Prime Minister Silvio Berlusconi’s personalized politics, the poorly managed accession to the euro currency in 1999-2002, the banking stressors unleashed by the 2008 global financial crisis, and later the humanitarian crises driven by the collapse of the Libyan and Syrian regimes has all but overwhelmed Italy’s society and economy and strangled its timid attempts to modernize and increase competitiveness and productivity.

These factors form the core troubles of Italy’s political economy, as the IMF staff country report in 2017 extensively explains. In other words, when an international crisis hits the markets, Italy is hit harder, and when recovery occurs, Italy recovers less. Almost three decades of this pattern have made the Italian economy weaker and less fair.

The End of Berlusconi

It is crucial to understand that, beside the shining performance of the M5S and the PD’s crash, the biggest upset of this election is certainly the change of leadership within the right-wing coalition. Since 1994, Italy’s right has been essentially owned by 81-year-old Mr. Berlusconi’s personal party, Forza Italia, which went down from 22 percent in 2013 to 14 percent.

The new leader of the right is the League’s 44-year-old Matteo Salvini, who achieved a staggering 17 percent, up from 4 percent. Mr. Salvini’s success lies in his radical strategy to turn the League from a fringe single-issue party calling for the full autonomy of Italy’s northern regions into a national-populist force that could capture the anti-immigration fears and anti-EU economic discontent of the middle classes beyond the wealthy and conservative north of Italy.

The M5S appears diffident toward the international liberal order and is open to a commercial détente with Mr. Putin’s Russia.

Mr. Salvini, who makes no secret of taking inspiration from the likes of Marine Le Pen, Vladimir Putin and Viktor Orban, proved a shrewd and ruthless social media campaigner, outshining the old ad-man master, Mr. Berlusconi. There are even reports that Russian networks worked to boost the far right in Italy, just like in the 2016 U.S. presidential elections.

The Strange Odyssey of Five Star

The M5S continued its relentless march to the front stage of Italian politics, evolving from a simple anti-corruption protest movement led by the coarse comedian Beppe Grillo into a more structured political platform.

This evolution is being driven by fresh faces such as the 31-year-old prime minister candidate, Luigi Di Maio, who managed to capture both the social issues and protests (against organized crime and nepotism) and the economic anxiety of the youth and precarious labor classes, mainly in the south but also throughout the country.

Come what and when it may, the next Italian government will center either on the populist League or on the anti-establishment 5 Star Movement. Furthermore, considering their young leadership and socially distinctive voter demographics, these two emerging parties are well-poised to crowd out any competition across the whole political spectrum for many years to come.

The League’s endgame is to become the single hegemon of Italy’s right and take it further away from the globalizing liberal-democratic tradition and toward a nationalist and neo-illiberal, so to speak, direction.

Similarly, the M5S will capture most of the remaining political space on the liberal center-right and social-democratic left with mixed-bag policy platforms loosely based on economic de-growth, direct democracy, environmental protection and libertarian humanism.

The Philippines of Europe?

In political economy, the League is distinctively neoliberal with policies that favor free enterprise, low taxation and less government intervention in the marketplace. In political philosophy, the League unashamedly runs an illiberal and xenophobic platform against migrants, EU integration and international cooperation, and it puts a strong emphasis on the executive power even if it comes at the cost of the rule of law and established civil rights.

Geopolitically, the League is broadly isolationist and inclined to appease Russia for commercial gains. Italy’s existing commitments to NATO and the EU would not be in immediate danger under Mr. Salvini, however there could be a roguish push to distance Italy from the liberal world order, possibly with unsavory outcomes. Italy could become a larger Hungary or even the Philippines of Europe over the long term under Mr. Salvini in terms of international affairs.

On the other hand and judging from its shadow government appointments just before the vote, the M5S’s economic outlook is situated on the liberal left, as their economy champion, Professor Andrea Roventini is a proponent of neo-Keynesian and Schumpeterian approaches built on agent-based models of policy analysis in the intellectual fold of American economists Joseph Stiglitz and Paul Krugman.

In political philosophy, the M5S is rather ambivalent, with a distinct tinge of libertarian and communitarian attitudes. Geopolitically, the M5S appears close to the League’s general diffidence toward the international liberal order and is also open to a commercial détente with Mr. Putin’s Russia. Over the long term under Mr. Di Maio, Italy’s foreign policy could compete and clash with France and Turkey for primacy in the Mediterranean Sea.

Charting Its Own Course

Either way, both the League and M5S promise a more independent role for Italy in regional and global affairs for better or worse, a direction that may expose the country to unwarranted geopolitical pressures and security risks.

Not much else can be said at this uncertain stage, at least not until we know the identity of the new government, a process that may take weeks if not months. Only then will we be able to fully assess the geoeconomic risks and opportunities attached to this historic change of the guard in Italian politics.

Dr. Giovanni Di Lieto teaches international trade law in the International Business program at Monash University in Melbourne. He is a councillor of the Australian Institute of International Affairs and a commissioning editor of its online publication, Australian Outlook.

Alain Frachon Senior columnist for Le Monde
URL: https://www.brinknews.com/shaking-italy-out-of-its-slump/
Get ahead in a rapidly changing world. Sign up for our daily newsletter. Subscribe
​​