The Alchemy of Peace and Business: Complex Compatibility 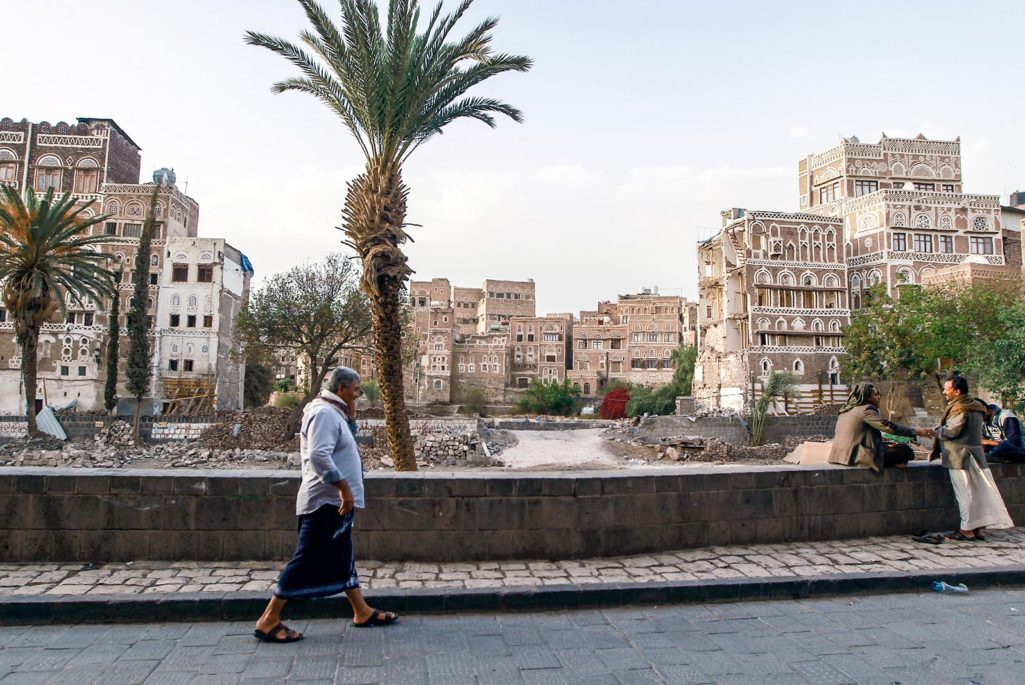 A Yemeni man walks on a street on March 23, 2016 in front of UNESCO-listed buildings that were damaged by air strikes carried out by the Saudi-led coalition over the past year in the Yemeni capital Sanaa. Yemen's warring parties have agreed on a ceasefire from April 10 followed by peace talks, a UN envoy said, raising hopes of a breakthrough in a conflict that has devastated the country.

In conflict settings, successful investment—meaning successful for the host community as well as for the investor—requires special considerations often overlooked in the general discourse. Among these considerations must be the fact that peacebuilding, like democratizing, is often a disruptive influence.

Nonetheless, calls are growing for private investment in fragile and developing countries. The recently enshrined Sustainable Development Goals and a separate report from the UN Secretary-General both explicitly call for mobilizing private resources for development activities. Bilateral aid agencies are also urging an enhanced development role for private actors. The most ardent enthusiasts of private-sector development extend this call to include private investment in countries still suffering from conflict, although it is not clear what this means or what such investment might look like. Boosting investment was considered critical to stabilizing and rebuilding Afghanistan, for example, but for more than a decade, the dominant context frustrated these aspirations.

In theory, the injection of private capital can help incentivize and/or consolidate peace by demonstrating international attention and commitment to a country, shoring up vital rebuilding efforts and providing employment as well as a vehicle for critical technology and knowledge transfer. This is easier said than done. Part of the challenge is that investment is now often encouraged during the early emergence of peace, what is often called “negative peace,” characterized by the absence of large-scale violence. What is needed for most traditional business investments to prosper is more robust “positive peace,” characterized by the presence of systems and institutions that support human well-being and prevent or resolve conflict nonviolently.

Peace, whether negotiated or imposed, disrupts a “conflict economy” and creates winners and losers.

Durable, positive peace is difficult to attain and one of the key reasons is that peace itself can be destabilizing in the short term. What many onlookers fail to understand is that every conflict, however dysfunctional it may look outwardly, has a functioning internal political and commercial economy. If it didn’t, the parties couldn’t sustain the fighting. Peace, whether negotiated or imposed, disrupts that economy and creates winners and losers. If not properly accommodated, losers may see greater advantage in attempting to derail peace than accepting it. The continual flaring of conflict in Sudan and South Sudan demonstrates the challenges of maintaining a peace that one or more parties perceive to be inequitable.

Even conflicts that appear short and finite can experience significant backsliding following an apparent settlement. The short (relatively speaking) civil war in Cote d’Ivoire between September 2002 and July 2003 was concluded when warring parties signed an end-of-hostilities agreement. However, years of violent outbreaks, war crimes and additional ceasefires followed, leading to major hostilities in the wake of the long-delayed and disputed presidential election in 2010. Not until 2014 did Cote d’Ivoire really see the return of an internationally respected business environment.

Adding to the complexity, few contemporary conflicts end in a clear military or political victory by one side. Negotiated cessations, or a general dominance by one party without official capitulation by the opposition, are both more likely scenarios. One of the biggest potential destabilizing factors is people themselves. In many conflicts, substantial numbers of combatants are part of non-state groups. As a result, peace can create an unemployed population of trained, armed—and, at times, otherwise unskilled—former fighters. Without legitimate means of absorbing these individuals—whether into state security forces, school or other employment—they can become an ongoing source of unrest.

There are also straightforward economic factors at play. A wartime (or peacekeeping) economy can act like a boomtown economy. The source of the boom ends when war-fighting or peacekeeping troops and humanitarian organizations pull out, and the lucrative salaries, contracts and international disposable incomes disappear as well. This causes volatility in the local economy as businesses compete, contract, fail or regroup to adjust to a smaller pie and new market conditions.

Investors looking to enter “post”-conflict markets are forced to try and predict how such volatility will play out and whether the terms of peace are likely to encourage stability or sow the seeds of the next conflict. Does the new governing authority have the credibility and strength to enforce peace conditions? Is the peace characterized by inclusive rhetoric, legitimate avenues for opposition participation and emphasis on equitable distribution of resources and services? If the answers are “no,” chances are good the peace will not last.

Companies that enter before a durable peace is established—even those with solid strategies for maximizing local development—may find their business plans laid low by uncontrollable forces in renewed conflict. Furthermore, businesses perceived as aiding opponents, or even just catering to them, can become easy marks actively targeted by violent groups. Separately, peace by itself in no way guarantees that new regimes can or will address the many other obstacles to effective business often present in conflict environments, such as poor infrastructure, lack of skilled labor and confusing or nonexistent commercial regulation and frameworks. Depending on the circumstances of the peace, these improvements may in fact be delayed while political elites focus on consolidating their power. The potential for corruption to further distort or obstruct legitimate business is also particularly potent during early peace when the sudden influx of aid and foreign direct investment provide a tempting boon to otherwise strapped officials.

Investors also need to assess whether their investments are likely to reinforce or undermine a fragile peace. Will investors’ operations compete with local elites, upsetting delicate power balances? Will they displace mom-and-pop businesses or informal traders without creating jobs those people are qualified to secure? Either of these scenarios can distort socioeconomic standing, dampen local commercial opportunities and cause locals to question the benefits of the peace, heightening tensions with foreign business and local government alike, particularly if foreign business is seen to the be result of new government policies.

To be clear, companies and investors with long-term interests should continue to explore opportunities in fragile markets and they certainly will be critical to advancing development in many frontier markets. In conflict markets, the private sector can help to “win the peace” or nudge peaceful transitions in the right direction, and the touted benefits that the private sector can provide—capital infusions, technology transfer, strengthening formal markets—are real. Companies may do this particularly well when they identify and fill true gaps in local goods and service provision; partner with local companies or entrepreneurs via joint venture, affiliate, subsidiary or contractor relationships to help increase their scale, scope or sophistication; or form public-private partnerships that explicitly leverage private sector contributions for public gain.

However, to best enable positive returns for both the company and the community, investors need to be mindful of the common hazards of business in a peace-building scenario: falling victim to the volatility of the environment, becoming a pawn to the agendas of local political or business elites or unsettling a fragile peace by tilting the financial or technical balance of power in a way that encourages renewed division rather than unity.

Clearly understanding the risks inherent in a post-conflict or peace-building phase and realistic time horizons for observing potential peace dividends is essential. Perhaps above all, companies entering into conflict environments should carefully assess the state of public services and transparent regulatory regimes and dedicate themselves to promoting, supporting and submitting to enhanced commercial frameworks. That may be the clearest way that the private sector can contribute to overall socioeconomic improvements in conflict markets.

Peter Schechter Host of Altamar Global Issues Podcast and BRINK columnist Juan Cortiñas Founder and Managing Partner at Opportunitas Advisors
URL: https://www.brinknews.com/the-alchemy-of-peace-and-business-complex-compatibility/
Get ahead in a rapidly changing world. Sign up for our daily newsletter. Subscribe
​​