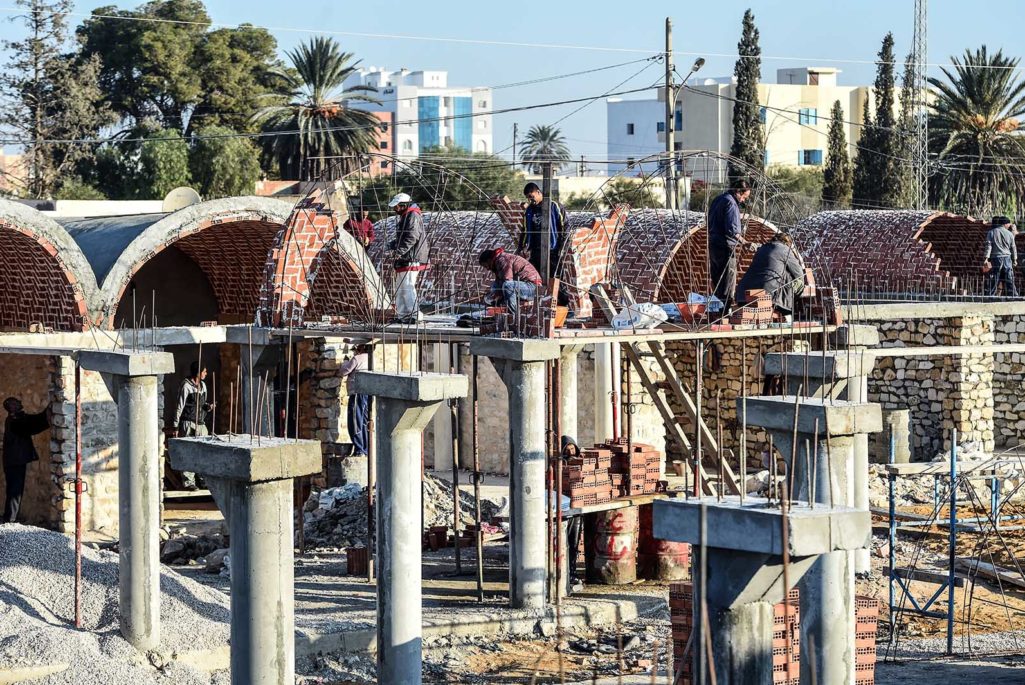 Tunisian builders work at the construction site of a new marketplace on December 15, 2015, in Sidi Bouzid, three days ahead of the fifth anniversary of events that sparked the Arab Spring.

In response to my recent commentary on the role of business in peacebuilding, a reader questioned whether the benefits of business were cancelled out by conflicts arising from culture clashes between Western companies and host-country partners that desire Western business and money but have no desire to adopt Western social, political and commercial attitudes.

First, let us assume that Western refers to North American and European companies. If successfully doing business with Western companies required all participants to adopt Western attitudes, then either there would be many more Western societies, polities and businesses, or there would be many more failed business initiatives. The many profitable multinational businesses and partnerships demonstrate that commerce can accommodate diverse social, political and commercial attitudes.

Furthermore, and setting aside the fact that attributing common social and political attitudes across Western businesses presupposes an unlikely uniformity, so-called Western characteristics are not exclusively Western. Many positive characteristics commonly associated with Western business—labor rights, transparency, non-discrimination, health, safety and environmental standards—are the cornerstone of activist movements in many non-Western countries. Just because certain standards are not clearly enacted in a country does not mean that the underlying principles are not valued. Many of these rights and obligations had to be wrested from, or eventually imposed upon, Western businesses over decades.

As enforcement rose in the West, some Western companies sought out international operations locations where formal safeguards and oversight were less stringent. From cheap or unprotected labor to lesser environmental standards to unregulated product testing, Western companies benefited from foreign operations under political regimes not yet pressured to implement such reforms.

This is not to deny that legitimate cultural differences in social, political and commercial attitudes exist, are material to business and need accommodating to successfully operate internationally, particularly in conflict environments; however, it would be difficult to suggest that business cannot support peacebuilding because of cultural difference. Overcoming conflict challenges in a way that provides for public benefit has less to do with a host country adopting Western attitudes than with aligning the interests and actions of foreign and domestic actors in mutually advantageous and nonexploitative ways.

Business, like politics, is a tool. It can create benefits and it can cause damage. In assessing the potential benefits, a “West against the rest” lens tends to confuse the actions of a political regime with the values of its people and can actually distort, rather than clarify, the actual and potential impacts of business.

Far from despairing over inevitable moments of discord that will persist in any competitive, cross-cultural endeavors, critics should take a longer view and heed the successes achieved in spite of them. At the end of World War II, the United States and Japan were socially and politically anathema to one another. As military victor, the U.S. forced open the Japanese economy but reaped the fallout 40 years later when Japanese companies looked set to overrun some of America’s strongest industries. Thirty years on, however, the U.S.-Japan relationship is a bulwark of the Pacific alliance, much of it built on the back of cooperative business arrangements.

More recently private business ventures expanded when communist regimes relaxed in Vietnam, Russia and China, countries with whom the U.S. does not have the tidiest of relations. Yet, when political relations are strained, business can provide a reason and an avenue to maintain some level of cordial relations. As such, commerce may prove fruitful in establishing or maintaining relations with conflict or anti-Western societies. In the long run, companies’ ability to leverage influence can be a complementary means of encouraging the kinds of characteristics beneficial to capitalism and democracy.

Even in conflict environments, where everything is political and the politics can be corrupt, opportunistic, unregulated, unpredictable and sometimes anti-Western, these remain exacerbated challenges, not new ones. International business has always involved adjustment and compromise, and scrupulous companies have found ways to avoid or overcome such challenges.

Companies must walk the line of distinguishing between cultural practices that are important to accommodate, such as prayer times, and practices that violate non-negotiable rights and responsibilities and must be respectfully managed, such as corruption or discrimination (not to mention practices in gray areas still heavily debated, such as privacy issues).

Changing cultural norms requires all involved to practice compromise and stretch beyond their comfort zone.

Granted, aligning interests is difficult when corruption, opportunism, lack of regulation or unpredictability prevails, but business may present a particularly viable means of engagement in those circumstances. Unlike diplomacy, which is explicitly political and inextricably tied to wider geopolitics or development organizations, which are ostensibly impartial but generally lack much leverage, companies often possess the dual benefits of influence and acceptance. Businesses directly tap into the importance of economics in a conflict. Access to jobs, taxes and new (or less expensive or higher quality) goods and services are benefits that appeal to a diverse constituency of actors. Realizing those tangible benefits depends on a company’s interest and willingness to invest in a place. Leveraging this influence allows companies to create common ground that increases multiple parties’ stakes in success.

That said, doing business in conflict zones is hard. To wield business for good, companies will have to be more cognizant of contextual circumstances. The material challenges may not be the most obvious ones. For example, corrupt politicians receive significant international attention, but corruption is nothing new and not exclusive to conflict zones. Ethical companies have developed many tactics for upholding their legal obligations and thwarting corruption.

More unique differences may arise from a mismatch of circumstances or expectations. For example, a company’s social “license to operate” may be predicated on promises of local jobs, but due to conflict circumstances—including brain drain, interrupted access to schooling or even heightened threats against those seen as “collaborating” with foreign interests—few qualified workers may be available. Likewise, the experience of surviving in violent and uncertain conditions can manifest itself in ways unfamiliar to companies used to peacetime conditions, such as the need for workplace accommodations that stringently protect workers’ identities, particularly women; a dearth of nonviolent problem-solving skills; or extreme sensitivity to perceived slights such as pay disparity, working conditions or other criteria that might be linked to political, religious, ethnic or other affiliations salient to the conflict in question.

While such issues take on exaggerated proportions in a conflict zone, companies have demonstrated great ability to accommodate cultural needs and overcome contextual challenges. Successful companies in this regard employ and support foreign and local leaders who value diversity and cooperation, prioritize the development of trusted relationships within the company and with key external partners, empower those with deep local knowledge to identify and surface workplace concerns in culturally appropriate ways and privilege locally determined, context-driven solutions whenever possible.

A more difficult gray area may be regulatory challenges. Changing cultural norms requires both foreign and host parties to practice compromise and stretch beyond their comfort zone. Nevertheless, people are generally amenable to adjusting even deeply held beliefs or behavior when change is reasonable and handled respectfully. Engineering change amongst a small group of people with relatively aligned interests is relatively easy compared to addressing regulations, which require convincing a great many people with a great variety of interests to agree on one particular value or practice (and then to enforce them).

There are instances where Western companies have benefited from less-regulated environments; however, more and more often, unregulated environments can present disadvantages for foreign companies. Even when host country regulations are absent, poorly enforced or in conflict with a company’s home country (or international) standards, foreign companies can expect to be held accountable, either by home regulatory agencies or, increasingly, by public opinion. Furthermore, when wide-reaching regulatory regimes such as public education, public health or public safety are degraded, companies bear the costs in the form of unqualified labor pools, employee absenteeism and heightened security problems and must choose between lower productivity or shouldering additional costs for private support services to improve and protect their human and material resources. To that end, a difficult but critical endeavor for foreign companies in conflict zones is to leverage the value of their private resources to help widespread public values find their expression in regulated means.

Conflict is a difference of opinion taken to extreme, whether those differences are social, political, religious or otherwise. As conflicts can be resolved, so can any other lesser differences along the spectrum. Business, as a phenomenon, can be used to encourage division or cohesion.

Peter Schechter Host of Altamar Global Issues Podcast and BRINK columnist Juan Cortiñas Founder and Managing Partner at Opportunitas Advisors
URL: https://www.brinknews.com/working-in-conflict-culture-clash/
Get ahead in a rapidly changing world. Sign up for our daily newsletter. Subscribe
​​