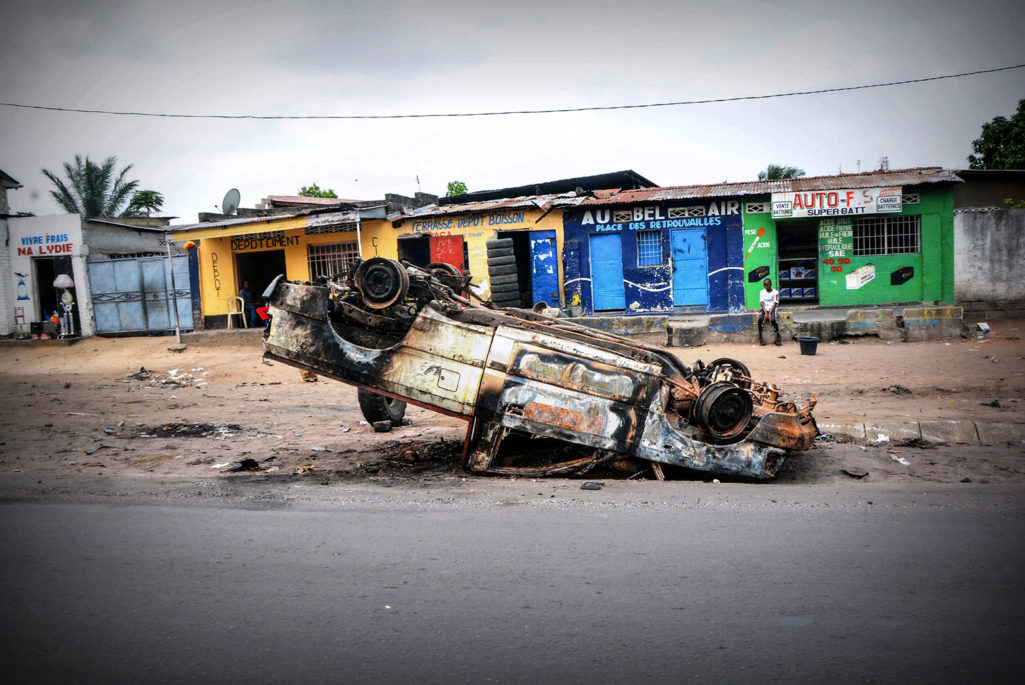 A burnt car sits on January 22, 2015 in Kinshasa in the Democratic Republic of the Congo on the fourth day of violent protests against President Joseph Kabila. Senators delayed a vote on January 22 on hotly contested legislation that would extend Kabila's rule.

In the wake of the (r)evolutions of the last 15 years, including two major wars fought by the U.S., the color revolutions, the Arab Spring uprisings, the patchwork of countries confronting violent extremism, and the unabating flow of refugees, there has been a surge of attention towards “fragile and conflict” countries. The International Monetary Fund estimates that there are presently 39 fragile or conflict states, half of which are in Africa, impacting half a billion people.

Major multilaterals including the World Bank, International Finance Corporation and IMF are shifting priorities to fragile or conflict-country initiatives and have all pledged to increase support to these states.

Nonetheless, it is the private sector that accounts for 90 percent of jobs in developing countries and remains essential to facilitating growth and reducing poverty. As the newly adopted sustainable development goals emphasize partnerships with the private sector, development and reform efforts in these countries will draw increasing corporate attention, despite the fact that fragile and conflict countries are not the types of places where one would expect to see an influx of private capital.

The outstanding question is whether this corporate attention will help or hinder these fragile markets on their path to stability.

From the private sector perspective, developed markets are highly saturated and growth in many more (relatively) stable emerging markets has largely plateaued. Thus, while risks are high, investors and companies are taking a second look at fragile and conflict markets. Supporters of this strategy point to benefits such as high potential returns for companies that get in on the ground floor as well as the opportunity to leverage private investments for public benefit.

Doing Good and Doing Good Business is a Difficult Task

The reality is that investments in fragile and conflict settings are just as likely to create tensions as they are to resolve them, and doing good in addition to doing good business is a difficult task.

Standard tools of risk analysis, typically geared towards institutional investors in high finance, are not well-suited to fragile markets. In the rash of increased attention, the tendency to standardize or over-simplify assessment processes raise the risks for both the investor and the host country.

Company risk will always be specific to the company, dependent not only on country, but specific location, industry, size, business model and other contextual factors. Nonetheless, prevailing risk-assessment practice focuses on country-level factors, and on a narrow evaluation of the observed risks and their chances for avoiding those risks (or withstanding the fallout, should those eventualities come to bear). This is a static calculation that asks: What are the risks; should we go?

That is only the tip of the iceberg. If companies decide to enter fragile markets, they become part of the risk profile. There is a real potential that simply by entering a fragile or conflict market, a company will change the operational, political and economic environment. This dynamic is routinely misunderstood and nearly impossible to fit into a standard assessment model. The more unstable the market and the farther along the spectrum towards conflict a country sits, the more difficult it will be for a company operating there to maintain a neutral presence and the more prepared it must be to engage politically, socially and economically. It is undeniably a local stakeholder with influence and impact.

How Companies are Perceived in Fragile Markets

In places where institutions are weak, disordered or dissolute, regulations are often nonexistent or unenforceable, and politics and economics are virtually indivisible. Companies entering such a setting will be viewed by local parties in terms of their resources and how those resources are deployed. The introduction of a new company, particularly a company perceived as large, foreign and wealthy, can have an outsize impact, altering the status quo and even shifting the balance of power. As a result, all parties—from government officials to opposition groups, business elites and civil society groups—will be independently assessing how a company can affect its own prospects and objectives, and acting in ways to direct company resources to advance its own self-interest. This can happen in legitimate and illegitimate ways, intended and unintended.

If companies decide to enter fragile markets, they become part of the risk profile.

The most common impact companies have in fragile and conflict markets are fees paid to a government such as taxes or payments for security protection. These are generally legitimate in that they are legal, but in some cases may support a government considered illegitimate by part of the population. Foreign companies can have a positive impact by helping to create demand for institutions that can collect, monitor and distribute tax revenues. They can also be under pressure to produce “fees” to ensure non-interference with company operations (by government or non-government actors), or the outright seizure of company money or assets by armed opposition groups. Not only are bribes illegal for Western companies, they sap demand for creating effective local institutions.

A less considered, unintended impact can occur through company-run social programs. These are typically corporate social responsibility programs or other stakeholder engagement efforts intended to foster community development but which inadvertently can create or heighten tensions by raising the stakes of available resources, benefiting certain groups or localities over others or creating unrealistic (and unmet) expectations.

Wherever corporate money, resources, expertise and technology go creates a ripple effect, explicitly or implicitly benefiting someone, often at the real or perceived expense of someone else. These are political decisions, but they are often considered in strictly economic terms. Locals in any fragile or conflict environment are hyper-aware of these potential up- and downsides and will understandably seek to reap the gains for their “side.” In the face of such pressures, a company must consider its role in local dynamics.

Companies contemplating entering (or remaining) in a fragile or conflict country must recognize they cannot be neutral parties, somehow separate from the environment in which they operate. To be successful, for all stakeholders, means taking a more comprehensive approach to risk assessment and understanding how their presence will influence the existing dynamic.

There are numerous examples of companies mismanaging the political environment—extractive industries such as mining, oil and export-only agriculture are notably criticized for this—but a carefully tailored approach that explicitly reviews the ways the company may influence conditions on the ground and change the political dynamic can have a positive impact. To do this, companies will have to replace their static risk calculation with a dynamic calculation that asks: What are the risks, can we influence them and how does our presence change them? Companies often ask the first two questions, but rarely the third. Doing so will consider not only how the risk environment may impact their business, but also how their business may impact the risk environment. Furthermore, in recognizing their potential impact on the community, companies are more likely to engage in a continuous process of re-evaluating the risk profile, have a better understanding of the political economy of the market and ultimately contribute to longer-term development.

Companies that take the risk of operating in a fragile or conflict location are influencing factors on the ground through their distribution of finances, resources, technical assistance and even by contributing to the perceived legitimacy of those with whom they work. By finding proactive ways to use their influence for public benefit, companies can help promote stability, transparent regulatory environments, better business conditions, fair labor standards and other benefits of developed markets.

In this sense, by explicitly acknowledging their influence and taking considered decisions about how to apply it in these volatile environments, they help create demand for better institutions, rule of law and good governance.

Smart companies looking at operating in fragile and conflict markets must start asking whether their presence in a place can help bring about positive change. If not, they may be contributing to its opposite.

Andrew Yeo Senior Fellow and SK-Korea Foundation Chair in Korea Studies at Brookings Institution’s Center for East Asia Policy Studies
URL: https://www.brinknews.com/fragile-states-integrating-doing-good-and-doing-well/
Get ahead in a rapidly changing world. Sign up for our daily newsletter. Subscribe
​​