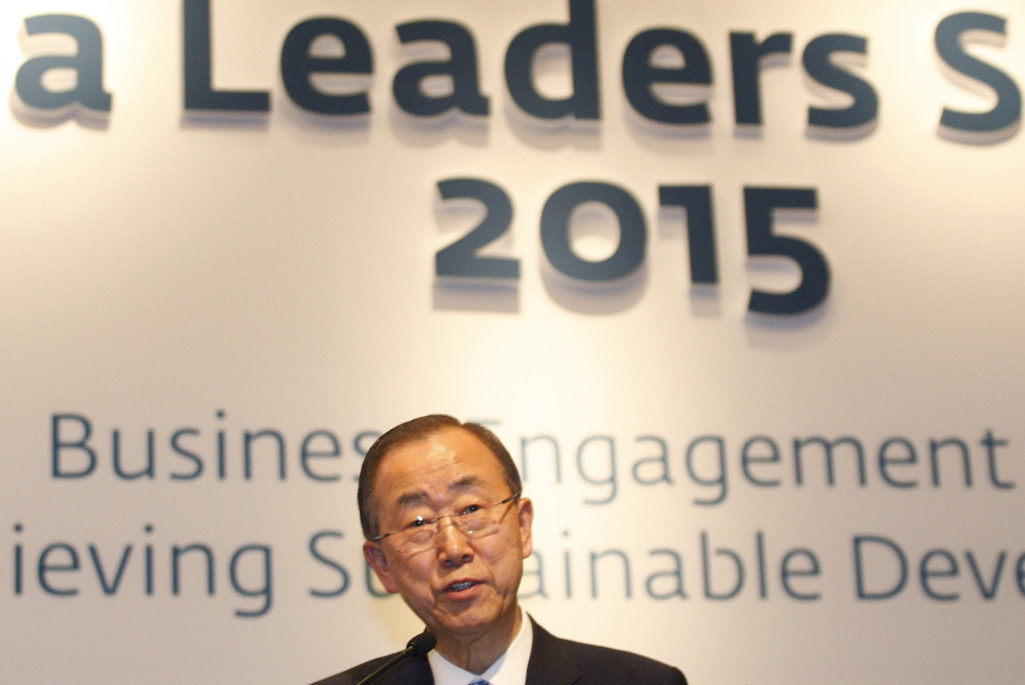 U.N. Secretary General Ban Ki-Moon speaks during the U.N. Global Compact to hold summit at the Conrad Hotel on May 19, 2015 in Seoul, South Korea.

In September, the U.N. will launch its post-2015 Sustainable Development Goals (SDGs), an ambitious to-do list to address the key economic, social and environmental issues the world faces by 2030. This is not just a conversation for government officials, politicians and development professionals, however. The private sector is expected to be an integral part of funding and supporting a wide range of these goals, from eradicating poverty to achieving gender equality. These goals are a direct reflection of the U.N.’s recent conversation about “the world we want”. They are a comprehensive development agenda, but they are also a call for a public-private partnership on a global scale.

With the SDGs, the U.N. has merged development targets (inclusive growth, social equity and environmental protection) with key business goals (revenue growth, resource productivity and risk management) in the hopes of creating a “revitalized partnership” with the private sector to solve the world’s most pressing social problems. While there are risks involved with signing onto these hefty goals, it would be riskier for the private sector to sit on the sidelines.

What the Millennium Development Goals Accomplished

The SDGs aren’t the first set of long-term goals to be issued by the U.N. The Millennium Development Goals (MDGs) came first as the eight crisp issue areas for the development community to focus on, with measurable targets to accomplish by 2015. The goals included achieving universal primary education, empowering women and ensuring environmental sustainability, to name a few.

While not all goals were met by 2015, success was palpable, according to the UN Millennium Development Goals report. Between 1999 and 2011, the proportion of the global population living on less than $1.25 a day has been halved. The global mortality rate for children under 5 years old was also halved from 1990 to 2015. And the global maternal mortality ratio (deaths per 1,000 live births) declined by 45 percent worldwide since 1990. While many factors contributed to these results, the MDGs brought an added acceleration to meet them by a particular deadline.

At the outset of the MDGs, the private sector was asked to participate through the U.N.’s Global Compact, a corporate sustainability initiative. Only a handful of companies signed on at first, but participation has now grown to more than 12,000 signatories.

What The Sustainable Development Goals Will Require

From the very beginning of negotiations on the SDGs, U.N. officials sought to formally bring the private sector into the dialogue. A leading group of companies from the Global Compact participated in these discussions and private sector leaders sat on the panel created to advise U.N. Secretary-General Ban Ki- Moon on the global development framework. Their input was combined with that of the 193 member states of the U.N., global development institutions, nongovernmental organizations, social media communities, and surveys conducted in rural villages to create a collective vision for the future.

With a stakeholder community this large, however, the eight issue areas of the MDGs expanded into 17 overarching SDGs, set to be launched at the September U.N. summit. Collectively, the SDGs expand the MDG’s focus and define what must be done as a global community to reach sustained prosperity for everyone. This includes the end of poverty, hunger and other major social inequalities. Each goal has a series of measurable targets, adding up to 169 targets to hit by 2030. Unsurprisingly, the SDGs have been criticized for being too broad and aspirational.

But while these goals certainly risk losing focus, they also provide the widest platform possible for individuals, institutions and the private sector to create their own strategy oriented to an area where they can have the most impact.

Global companies should be a part of the development story, not just a beneficiary of it.

What the Private Sector Should Do

The Global Compact asked companies for voluntary compliance and commitment to a set of sustainable business practices and principles. The SDGs, however, ask the private sector to be a driver in global development through the promotion of good governance and financial support.

This expanded focus comes at the right time. Corporations are graduating beyond uncoordinated corporate social responsibility programs and integrating the concept of social impact into their core business strategy. The motivation for these companies is not necessarily altruism, but more a recognition that poverty, lack of education and inequality inhibits economic growth and opportunity across the globe.

Businesses also recognize that younger employees are drawn to working in purpose-driven organizations with a community connection, qualities on which the SDGs are based. Brand sensitivity also motivates more active participation in solving social challenges, and most business leaders are moving to show leadership on societal as well as corporate development. In the words of Charles Kenny, senior fellow at the Center for Global Development, discussions around global development among developed countries are not centered on “what can we do for them” but on “what can we do for each other”. This is also true for the private sector.

High-profile business leaders such as General Electric’s Jeffrey Immelt, Rio Tinto’s Sam Walsh, and Unilever’s Paul Polman, have all called for the business community to be a force for good. But the new SDGs are still struggling with how to get the private sector involved, especially since business will need to fill an estimated $2 trillion annually to meet those goals. With the MDGs, committed firms reported systematically on what they were doing to support each of the eight goals — but how does one do that with 17 goals and 169 targets? How do companies from both the developed and developing world ensure visibility for innovative efforts, navigate government bureaucracies, engage NGOs, and interact with local governments — all while still focusing on their core business?

There will be no shortage of guidance as the goals are announced on how the private sector can engage. The key element, especially given the nature of the SDGs and the number of actors involved, will be focus. With 17 goals, it will be important for companies to focus on a signature goal aligned with their core business offering. This requires a three-step approach:

• First, transform the company. Look to what the company can do to align itself with the best practices in sustainability.
• Second, transform the sector or industry. Provide leadership within the sector to advocate for the most effective contributions to development.
• Third, transform the world. With a focus on a few key social issues and successful project planning, the long-term health of both global communities and the businesses themselves will thrive.

Global companies need to become part of the global agenda and should be a part of the development story, not just a beneficiary of it. Business leaders will want to be ahead of this trend as communities of concern grow.

Mark Campanale Founder and Executive Chair of The Carbon Tracker Initiative
URL: https://www.brinknews.com/how-the-private-sector-can-take-global-development-goals-to-the-next-level/
Get ahead in a rapidly changing world. Sign up for our daily newsletter. Subscribe
​​