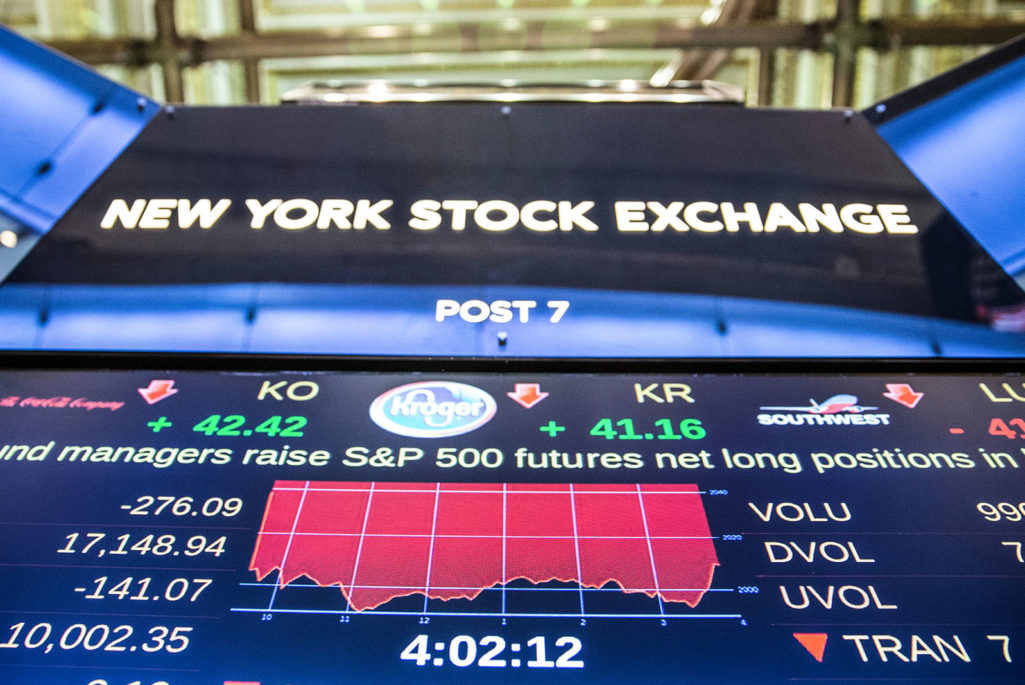 A screen displays the current status of the New York Stock Exchange during the afternoon of January 4, 2016 in New York City. During first day of trading for the NYSE in 2016 the market dove over 350 points on opening and closed more than 275 points down.

‘Muddle through’ is our description of the world in 2016

While the wheels aren’t falling off the global economy, it’s hard to get excited about upside opportunities for global businesses and investors in 2016. Demand is modest, trade is slowing, debt loads in many regions are high and monetary policy is diverging. This all suggests that global economic growth will remain slow and uneven in the coming year.

India is the biggest good-news story, and after that, it’s the good old United States. For consumers, cheap and abundant energy is a plus, but like low interest rates, extra supply can only do so much to prime growth. Business opportunities—in countries such as Myanmar, Iran and Argentina, for example—will be niche and require discernment and patience.

Many other emerging markets (EMs) and their companies will struggle due to the continuing slowdown in China, low commodity prices, overcapacity and heavy corporate debt loads. Net equity and debt inflows to EMs decreased from an average of $285 billion in 2010–2014 to $41 billion in 2015, and capital flight is likely to dominate in 2016. Political risks are present in varying degrees in developed as well as emerging regions, which will help muddy the picture. Migrants empowered with smartphones are on the move, with nationalism and populism rising in response and mainstream political parties find themselves playing catch-up.

Syria: Can the great powers cooperate?

The five-year war in Syria, though horrifying and tragic, has had little direct impact on the global economy. Markets hardly moved in the wake of the November terror attacks in Paris. But in the last several months, the conflict has spawned a cascade of collateral damage: the refugee crisis, ISIS-inspired terrorism and Russian sanctions on Turkey. Add in the involvement of France, the UK, Iran, Saudi Arabia and the U.S. and Syria begins to resemble the Balkans just prior to World War I. But all this international attention doesn’t necessarily mean a wider war is in the offing. Instead, it could help ease the conflict in 2016, perhaps through the de facto partition of the country into safe havens.

Europe: Refugees and nationalism threaten to roll back integration

Earlier this year, Greece was the focus, but its potential exit never threatened to undo the eurozone or the EU. However, the flood of migrants now entering Europe through Greece do threaten the EU’s integrity. In the long term, immigration could stimulate Europe’s economy, but the near-term political risks it poses are substantial. Anti-immigrant sentiment and related fears of terrorism are fueling nationalism, especially in Eastern Europe.

These countries, which had been among the strongest proponents of European integration, are now bridling against German chancellor Angela Merkel’s liberal stance. Austria, Hungary and others have acted unilaterally to secure their borders and the Schengen rules have been suspended. These policies promise to disrupt the movement of goods and people—core tenets of a united Europe. Meanwhile, mainstream political parties are being outflanked, as recent elections in Poland, Denmark and, almost, France illustrate.

The United Kingdom’s EU membership referendum could take place as soon as the second half of 2016 and Brexit partisans will have a field day criticizing everything European. While voters likely will opt to stay in the EU, the process will be a huge distraction.

The IMF expects the euro area economy to grow by 1.6 percent in 2016, but the sour mood and questions about the region’s future could undermine already fragile consumer and market confidence. In addition to the UK referendum, signposts to watch in 2016 include Turkey and NATO’s ability to secure the Syrian-Turkish border, the EU’s ability to intervene and secure Greece’s border with Turkey, Merkel’s ability to maintain her position and the ability of mainstream politicians to sell voters on their view of what being European means.

Policy uncertainty, political theater and division make the U.S. a source of political risk in a fragile world.

The U.S.: The world’s economic anchor doesn’t look so secure

In a slow-growth world, the U.S., with GDP growth forecasted at 2 to 3 percent in 2016, is a critical economic anchor. But one wouldn’t know it from the political discourse or Americans’ angst and anger: Two-thirds of those polled in September 2015 by Bloomberg said the nation is headed in the wrong direction.

The likelihood of an outsider candidate—with outsider policy positions—winning the Republican nomination is high. The number of immigrants from Latin America moving north is on the rise again and this could create more border drama and populist backlash in 2016. Another terrorist attack would accentuate unease and volatility. In short, policy uncertainty, political theater and the accentuation of division make the U.S. a source of political risk in a fragile world.

The election of pragmatic, pro-market parties in Argentina and Venezuela and the plight of Dilma Rousseff and the Workers Party in Brazil represent a historic swing away from leftist-populist politics on the continent. Change in the business climate and a return to robust growth will be elusive in 2016, however.

Longview Senior Energy Advisor Jeremy Maxie notes that while Venezuela has the world’s largest oil reserves, turning the country around will require much more than a policy shift. Rebuilding PdVSA, the once-respected national oil company, for example, is essential to stabilizing the Venezuelan economy, but the organization has been eviscerated by talent flight.

Expect more corruption charges in Brazil in 2016. The Rousseff impeachment proceedings won’t change the country’s dire fundamentals, except to lay on more political risk. There is no credible political savior in the wings. Brazil’s GDP was down 4.5 percent year-on-year in the third quarter of 2015 and likely will not return to growth before 2017, thanks to low commodity prices, the government’s fiscal straits and paralysis induced by the corruption investigations. At least the Summer Olympics may offer Brazilians some distraction.

The Russian economy is expected to have contracted by as much as 4 percent in 2015. Low oil prices, falling household incomes (down more than 10 percent), high interest rates, sanctions, and political risk will assure that the market remains depressed in 2016.

That said Putin is winning the political long game—both abroad and at home—so we don’t expect any surprises in 2016. The freezing of the conflict in Ukraine, cooperation on Syria, and an easing of European sanctions may take the edge off East-West tensions later in the year.

Weak governance and dependence on commodity exports are undermining the “Africa Rising” growth story. The IMF expects GDP growth in 2016 to slip to 4.3 percent compared with 5 percent in 2015. The continent’s three economic anchors—Nigeria, Kenya and South Africa—are emblematic of the challenges Africa faces.

Nigeria’s budget and currency have been hit by the oil price collapse, but the economy is more diverse and robust than many outsiders think. Nigeria has a vibrant consumer and service economy and serves as the economic hub for West Africa. New president Muhammadu Buhari seems to be taking on corruption, and though he faces many challenges, many Nigerians view Buhari as the right person for the job, says David Stevens, founder of Fireside Research.

Kenya has the most diversified economy and is thus more insulated than others from the commodities crash, but the government’s harsh response to tribal and religious tensions risks undoing this good-news story.

“South Africa is the country I worry about most,” says Will Pearson at Triskel Global. The political situation there is tenuous and the Zuma administration lacks broad-based popular support to tackle the country’s neglected and pressing fiscal, labor, infrastructure and inequality challenges. Two signs that Africa’s rise has not come to a halt would be a reduction in tribal and religious tensions and progress in the fight against corruption.

China has been the largest contributor to global GDP growth and its slowdown now stands as the greatest downside risk to the global economy—mostly due to reduced demand for commodity and capital goods imports. For this reason, Western media and market actors behaved as if the wheels were coming off the economy last summer when China’s stock market plunged and the government depreciated its currency. China’s policymakers have been working overtime to assure the world that they are in control and that they have a number of levers to assure that growth doesn’t dip below 6 percent in the medium term. It is unrealistic, however, to expect policymakers to execute the far-reaching reforms they’ve outlined and not make missteps or create dislocation. China’s elites are deeply divided on issues such as sustaining exports, reining in the military, letting state-owned companies fail and fighting corruption. A hard landing would be catalyzed by a drop in real estate prices that undermines the shadow banking system and municipal budgets.

Elsewhere in Asia: The view is rosier

While there is reason to be concerned about growing military competition in the East and South China Seas, military conflict remains a rather low-probability, albeit high-impact risk. Moreover, China’s actions are driving other countries in the region to pivot toward the U.S.

India was the biggest positive story in 2014-2015 and investment started to pour in. That will likely continue in 2016, with the IMF projecting growth at 7.5 percent. Prime Minister Narendra Modi has made limited progress on his reforms, however, and is at risk of deflating the high expectations he has created.

Southeast Asia will remain a region of opportunity, bolstered by the nascent ASEAN Economic Community, China hedging and, down the road perhaps, the Trans-Pacific Partnership.

Xianbin Yao Professorial Lecturer of International Studies at De LaSalle University Manila
URL: https://www.brinknews.com/the-2016-global-ceo-agenda-slow-growth-nagging-risks/
Get ahead in a rapidly changing world. Sign up for our daily newsletter. Subscribe
​​