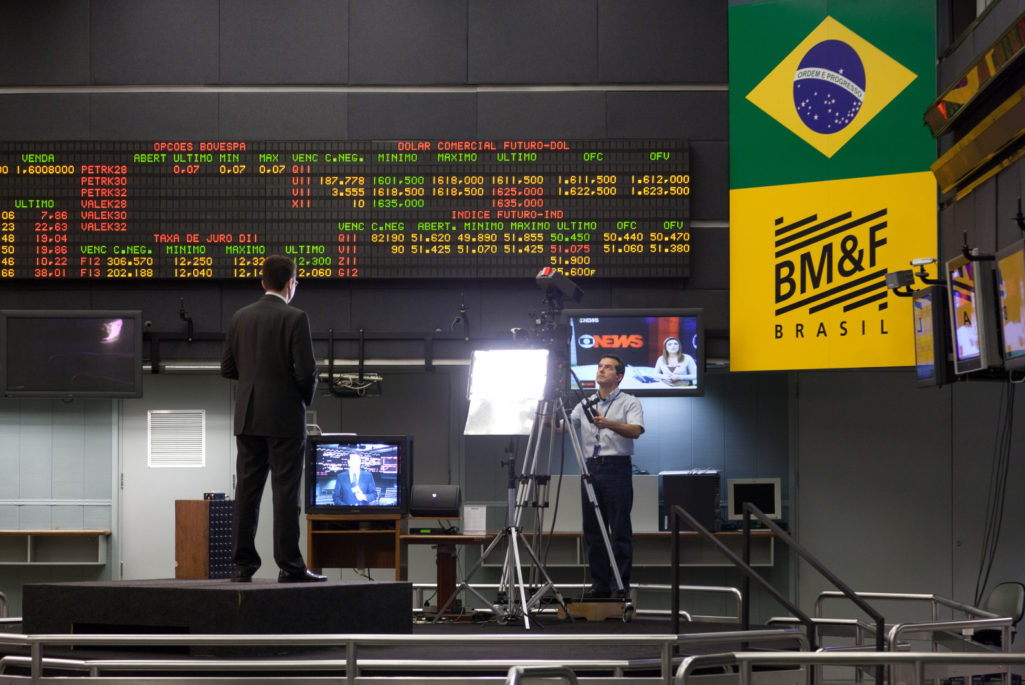 A reporter informs from the former negotiation room of Sao Paulo's Stock Exchange.

Perhaps the most ostensible of all challenges faced by the global economy is that of pervasive debt levels. For quite some time now, particularly following from the global financial crisis, debt accumulation seemed to be the problem circumscribed to the developed world. Things have changed, and we are now finally coming to the realization that emerging markets are following suit. Despite the fact that these economies are at an earlier stage of the leveraging cycle, the speed at which emerging markets are accumulating debt is outstanding, in many cases faster than it has been in the developed world.

In the midst of that leveraging process, commodity exports in the emerging world have experienced what can be described as the fastest and most severe price adjustment of the last few decades. For the less foresighted, adapting to a “new normal” of lower commodity prices will not be easy as they have not built up enough buffers on the fiscal and external sides.

A good example of this can be found in Brazil. In addition to worsening terms of trade stemming from a sharp drop in the price of key commodity exports (iron ore, crude oil and soybean to name a few of the main culprits), the country has had to endure tightening monetary measures. These have not only restrained the country’s economic growth potential, but have also worsened the already large debt burden of the Brazilian economy. The importance of the developments in Brazil cannot be underestimated because of the role that the country still plays in the pool of emerging market investment. A downgrade of Brazil, which would imply losing its investment grade status, could quickly spread to other countries facing similar circumstances.

The economic woes of a country like Brazil, so far and so different, can help us to better understand the developments on the ground in Asia. China springs to mind as an example of a country at the epicenter of these concerns in Asia. To begin with, the Chinese economy, notwithstanding weak growth prospects, is experiencing a surge in stock prices that cannot be easily explained based on China’s economic prospects. In fact, rather than a cause for celebration, the recent stock market euphoria may actually reflect a huge thirst for funds following heavy-loaded easing measures implemented by the PBoC. The main risk associated with this easing mode is that it could continue to feed unsustainable levels of leveraging.

This is more of a problem for China than people may think. Debt has ballooned since the global financial crisis and, according to one study, China may have been leveraging as much as Southern European countries but with a very important difference: China is doing it at a much earlier stage in its development. Let’s compare China’s situation with that of Asia’s poster-child for huge debt levels—Japan. We economists like to think that flows matter as much—if not more—than the stocks when it comes to rapidly accumulating public debt levels. While it is true that debt levels remain more moderate in China than in Japan (55% of GDP as opposed to 250%), the pace of public debt accumulation has been faster in China since the global financial crisis. The same is true for Chinese corporate debt, which is now six times bigger than it was in 2007 (115% of GDP from 20% min 2007). Rapid debt accumulation coupled with looming deflationary risks portrays a pretty gloomy picture for China.

On the monetary front, central banks in Asia clearly have more room to cut rates than a country like Brazil, and this is exactly what they have been doing recently. However, such dovish activism may not last for long in the context of the Fed’s imminent tightening, especially given how vulnerable emerging economies are to capital flow volatility. Within Asia, Indonesia and India are the key cases for heightened volatility and reversal in interest rate cuts. The ECB and Japan’s recent easing policies have helped to cushion some of the capital outflows from emerging markets, but recent experiences show that the FED is really the key determining force for emerging market behavior, especially in Asia and Latin America.

This piece appeared on Bruegel’s blog and was slightly edited from the original version.

Tom Friedman Author, Reporter and Columnist for The New York Times
URL: https://www.brinknews.com/the-emerging-world-debt-as-key-risk/
Get ahead in a rapidly changing world. Sign up for our daily newsletter. Subscribe
​​