The Geopolitics of Food Security 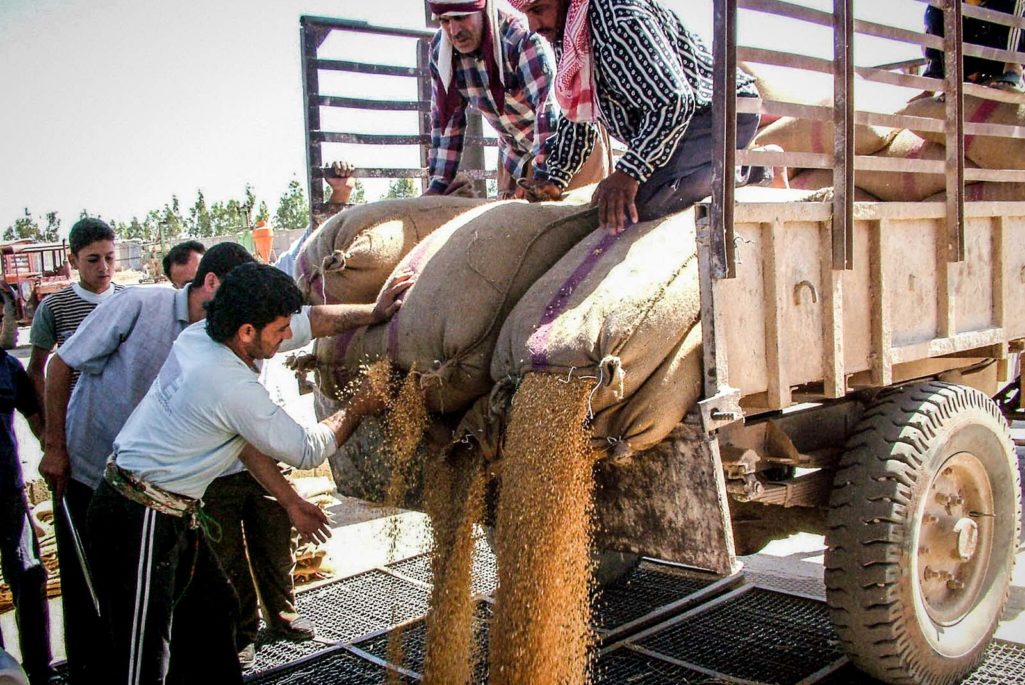 An undated 2008 picture shows Syrian farmers emptying their harvest of wheat at a depot in Daraa, 100 kms south of Damascus. Syria's worst drought in 40 years strangled grain production, prompting authorities to seek aid from the UN's Food and Agricultural Organization. Wheat production fell 53 percent in 2008 and barley by 68 percent, with thousands of families affected.

Disruptions to the global food supply, from several factors, will shape the geopolitics of the 21st century. Global population growth, climate change, water insecurity, soil degradation and pollution will all have impacts on the global food supply. Increased food scarcity has the potential to contribute to geopolitical ructions that can have widespread consequences.

Food security is getting increased attention as the global population continues to grow and concerns emerge about the ability of the planet to feed these additional people. The global population is projected to increase to at least 9 billion people by 2050. Increasing food production will prove challenging, however, as rising temperatures make the world increasingly arid and unsuitable for agricultural production. Soil degradation, already believed to have destroyed 33 percent of the world’s arable fields, adds another problem to the search for greater agricultural yield.

Access to food has also come to be seen as an important factor in ensuring political stability, particularly after the food crises of 2008 and 2011. Josette Sheeran, the former Director of the World Food Program, suggested the following: “A hungry world is a dangerous world. Without food, people have only three options: They riot, they emigrate or they die. None of these are acceptable options.” Food scarcity, on its own, is unlikely to lead to rioting or emigration. Its contributory role in fomenting such activities, however, should not be ignored or downplayed.

The Example of the Arab Spring

It is challenging to identify a riot that has been instigated by food scarcity alone. Some suggest that the Arab Spring that swept through the Middle East and North Africa in late 2010 and early 2011 was caused in part by rising food prices. To suggest that it was instigated solely by the cost of food is simplistic and incorrect. The social situation in the region was complex and multifaceted. High unemployment, corrupt officials, dictatorial regimes and a general lack of optimism for the future were the main contributing factors in generating social unrest. The Arab Spring was driven by a plethora of social ills that happened to coalesce at a time of increasing food scarcity that, in part, contributed to the protests.

Egypt has long grappled with food politics. Wheat subsidies are a politically sensitive topic. When former President Anwar Sadat attempted to rescind the subsidy program in 1977 at the urging of the World Bank and International Monetary Fund, riots broke out across the country. These demonstrations were caused more by the unwinding of a paternalistic governmental policy than by a shortage of food.

Josette Sheeran: “Without food, people have only three options: They riot, they emigrate or they die.”

The 2011 demonstrations in Egypt were unlikely to have been as popular or powerful without the earlier series of protests that took place in Tunisia. This country was relatively insulated from the rising cost of food, suggesting that it was not a major factor in getting Tunisians into the streets. Between November 2010 and January 2011, during the height of the protest movement, the Tunisian consumer food price index actually decreased slightly and then remained stable for most of 2011. Tunisian protesters were carrying baguettes, not because of rising food prices, but rather as a potent symbol of the government–funded subsidies designed to keep them placated. These cases demonstrate that “food riots” have been caused by political circumstances rather than the rising cost of food.

Individuals are rarely driven to rioting by a single cause; usually multiple factors combine to push people to extremes. Food scarcity is seen as a “threat multiplier” instead of a determining factor in human activity. It has the potential to exacerbate existing social, political and economic tensions to the point where societies actively challenge the political leadership. By the same token, however, the rioters need to believe that challenging the regime will improve their circumstances. If the riot is driven by a lack of access to food, this would mean increasing the food supply, a feat not easily achieved by government.

Emigration is not a terrible response to food insecurity and is more likely to occur than rioting. It only becomes a problem when a country is not able to adequately respond to the influx or outflow of people. Poor coping strategies perpetuate human suffering and contribute to rising social malaise.

In Syria, for instance, a widespread drought beginning in 2006 forced about 1.5 million rural people into the cities where unemployment was high. Prior to the drought, Syria faced considerable domestic problems, suggesting that it was not just food scarcity that led to popular demonstrations.

The world is experiencing the largest international movement of people since the end of World War II. Many of those migrating are doing so for complex, multifaceted reasons. Food scarcity, in some cases, is a factor, but it is unlikely to be the only reason.

People that move only because of food insecurity are likely to move only relatively short distances, either within the boundaries of their home country or into neighboring countries. They are less likely to journey long distances unless they are moving for reasons in addition to lower food availability.

Potential Solutions to the Challenge

Globally, there is an abundance of food. The agricultural revolution ensured that food production increased 180 percent while the global population increased by 120 percent. Existing food security challenges are therefore caused not by scarcity, but by an unequal distribution of food throughout the world.

As the global population increases and climate change alters existing agricultural patterns, it is possible that this situation will change, ushering in a period of food scarcity. Estimates suggest that food production will need to increase by 60 to 110 percent by 2050 to meet demand. Increasing agricultural production is often cited as a solution, mainly by those with an unrelenting faith in technological progress, but this is unlikely to go far enough to limit food insecurity.

According to Lester R. Brown in his 2012 book Full Planet, Empty Plates: The New Geopolitics of Food Scarcity, the significant annual increase in global crop yields, brought about by the agricultural revolution, has begun to slow. Between 1950 and 1990, world grain yield increased by an average of 2.2 percent per year. In the two decades since 1990, however, it slowed to 1.3 percent per annum. Without a similarly robust shift in agricultural production, it is unlikely that global food production will be able to keep up with growing demand.

Currently, almost one-third of the world’s food produced for human consumption is lost or wasted. This represents economic and environmental inefficiencies, as considerable resources are wasted on food that is never properly utilized. Finding ways to minimize food waste will be necessary to avoid growing food insecurity.

Increasing the amount of funding given to agricultural research will be necessary to drive innovation in the sector. In the developed world, the level of public funding available for agricultural research has declined since the 1980s. Reversing this trend will be vital if the world is to ensure future food security and avoid the challenges of food scarcity.