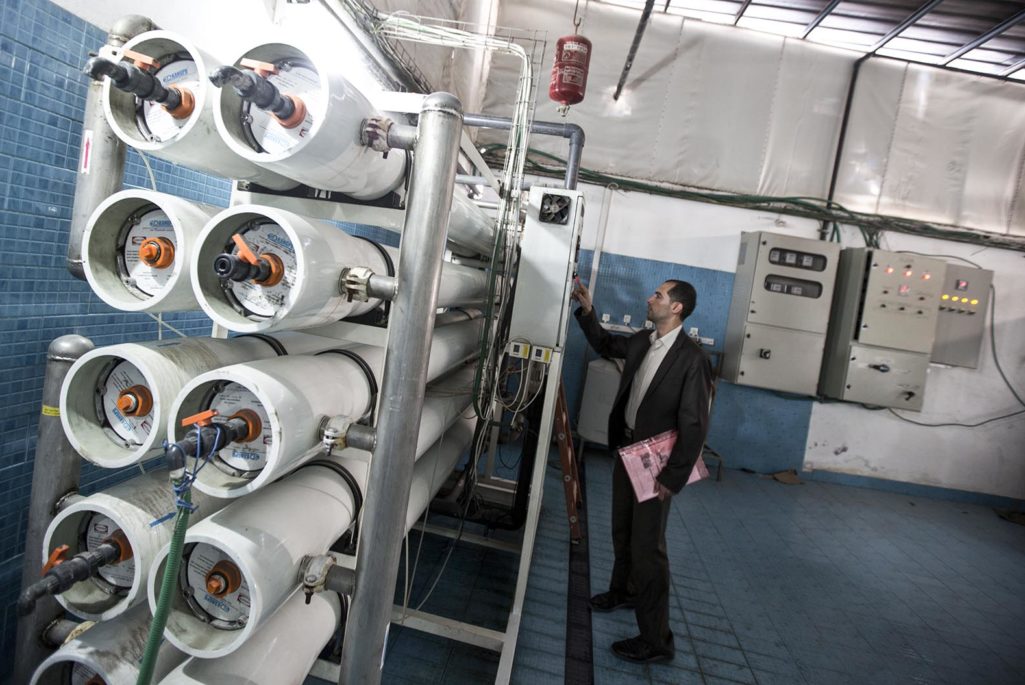 Palestinian engineer Diaa Abu Assi inspects a machine that makes seawater potable in Gaza city. The project uses nanotechnology to reduce the salinity in seawater to a drinkable level, as it it pumps water at high speed through large iron pipes and filters made of nano-material to extract the saline, which is then retreated with minerals that were removed during the desalination process.

The Middle East is likely to experience increased demand for food and water; however, innovative supply solutions and an emerging trend that encourages conservation and waste minimization could ensure that the region avoids extreme food and water insecurity.

A failure to address regional food and water insecurity could lead to increased inter- and intra-state tensions. If these tensions are not addressed, they will lead to additional hardship and, perhaps, conflict for the people of the Middle East.

These are the key findings of a new report from Future Directions International that examines the implications of rising food and water demand in 13 Middle Eastern countries through 2030.

Three factors—demographic change, altered dietary habits and the continuation of government subsidies—drive food and water demand in the Middle East. In many countries, particularly Kuwait, the United Arab Emirates (UAE) and Saudi Arabia, water use that outstrips freshwater renewal has led to a greater reliance on groundwater supplies. Much of the groundwater in the region fell as rain millennia ago, when the prevailing climatic conditions were vastly different than today. The Middle East has experienced rapid population growth since the 1950s and is expected to undergo considerable demographic change by 2030. Over this period, the population is projected to almost double from 226.6 million in 2015 to 491.6 million in 2030. As fertility rates are high throughout the region, especially in Iraq, Yemen and Jordan, the region’s population is likely to continue to expand beyond 2030. An increase in average life expectancy over the past 50 years has also contributed to the increase in the region’s population. Population growth and longer average life expectancy will be the main cause of increased demand for food and water in the region.

Adoption of the ‘Western Diet’

The kind of food in demand in the Middle East has changed over the past 50 years. During this time, the people of the region have more readily adopted the “Western diet,” which is characterized by increased consumption of food high in fat, sugar and salt. Demand for food that requires large amounts of water, such as meat, has also increased. If these trends continue, the region’s food security will become more dependent on international trade.

Food and water demand is kept artificially high in many Middle Eastern countries due to universal subsidies on energy, food and water. These subsidies are funded through the export of oil and gas and are treated as a birthright by many citizens. Since 2014, oil and gas revenues have declined and, as a result, the region is beginning to consider economic reform. Part of this reform must consider the winding back of state subsidies to more accurately reflect the true cost of supplying food and water, with the aim of reducing waste and demand.

The supply of food and water will be affected by natural resource availability, economic conditions and regional stability. Naturally occurring renewable freshwater sources are limited in the Middle East. Nine of the ten countries with the lowest freshwater resources per person are located in the region. Generally, water supplies have not been closely monitored or effectively managed, and wasteful practices have developed. Due to low water availability, the Middle East depends on food imports from outside the region. The Nile valley in Egypt and the Tigris-Euphrates basin in Iraq and Syria have traditionally been major producers of food. However, political instability, climate change and rising demand now threaten the ability of these regions to provide sufficient food for the growing population.

The Middle East will become more dependent on food imports. The states of the Gulf Cooperation Council already import 80-90 percent of food consumed in these states. This dependence makes the region vulnerable to international trade disruption. In 2007-08 and 2010-11, the region’s food supply was constrained when the price of internationally traded agricultural goods rapidly increased.

In a bid to prevent supply shocks, many countries in the region have invested in overseas agricultural land. While such investment is likely to increase regional food security, rising hostility to foreign investment and ownership of assets could present a future challenge to this model.

Technological solutions to rising demand for water, and by extension food, exist. As conventional water sources, including surface and groundwater, come under increased stress from rising demand and climate change, the region is likely to employ more non-conventional water sources, such as desalination, wastewater recycling and artificial groundwater recharge, to meet demand. These technologies, however, come with financial, and potentially environmental, costs.

Increased use of desalination plants could create environmental problems for the region and an overreliance on the technology could leave it in a weaker water security situation. Brine, a saline byproduct of the desalination process, can be nearly twice as salty as the water in the Persian Gulf. As the gulf is a shallow, semi-enclosed body of water, there are fears that the discharge of brine and a low freshwater inflow will increase its overall level of salinity over time.

In other parts of the world, brine is usually diluted in a “mixing zone,” but in the Persian Gulf, which lacks frequent rainfall and surface runoff, there is less opportunity for dilution. With effective environmental safeguards, the risk of dangerously increased salinity will be reduced, as the plants would be temporarily closed until environmental conditions return to safe operating levels. A heavy reliance on desalination plants, however, would weaken regional resilience to water shortages should the plants ever have to be shut down due to a breach of environmental safeguards.

The supply of food and water cannot continue to grow forever. Efforts will eventually need to be made to reduce demand-side growth, whether this happens before 2030 remains to be seen.