Crisis Water Management in China: the Key to Political Control? 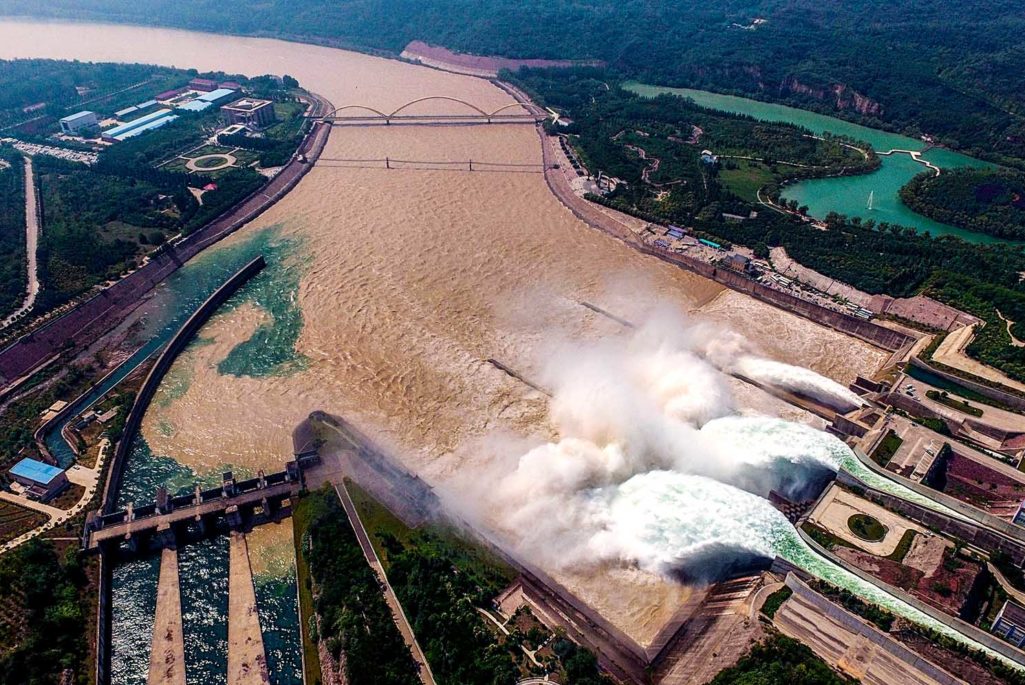 This aerial view shows water being released from the floodgates of the Xiaolangdi dam on the Yellow River near Luoyang, in China's Henan province on June 29, 2016. The floodgates are opened every year in an operation to flush millions of tonnes of silt from the river bed.

A link can be drawn between the ability to manage or control water and political leadership in China. The management of water partly shapes state legitimacy; as such, current Chinese leaders ignore it at their peril.

About four or five thousand years ago, according to recently uncovered geologic evidence, China was hit by a great flood that continues to shape contemporary ideas about leadership and the role of the state. At the time, according to a Chinese legend, Yu took instructions from a dragon to channel flood waters and tame the country’s rivers. After following the dragon’s guidance, Yu become emperor and established the Xia as the first Chinese dynasty. Early texts suggest that Chinese political philosophy is built around the premise that “he who controls the water controls the people.” This guiding principle has continued to motivate the engineering projects of modern Chinese leaders, including Mao Zedong and Hu Jintao.

A Short History of Water Control

Some scholars, such as the German-American political scientist Karl Wittfogel, have suggested that the leaders of tightly controlled hydraulic societies, such as China, are able to maintain their hold on the levers of state control by managing water resources. According to this argument, as long as the Chinese political class is able to effectively control and manage water resources, their social position is guaranteed. The problem with this line of thought is that it risks reducing the sociopolitical character of China to a simple equation: To maintain a hold on political power, maintain control over water. In practice, however, this equation does not adequately reflect the numerous strands of Chinese political administration or the expectations Chinese society has of its leaders.

Throughout the ages, water has been a central component of state control in China.

Water has nonetheless been a central component of state control in China. Throughout the ages, a leader’s competence has been partly measured by his or her ability to manage water resources. Chinese leaders continue to attempt to ensure that they appear to be competent managers of the country’s water; however, in contemporary China, this has become increasingly challenging.

State-led water management in China has historically involved transferring water from areas of abundance to areas of scarcity. During the Han Dynasty (206 B.C.-220 A.D.), chain pumps were used to move water to irrigate fields and provide water to urban settlements. Centuries later, Mao Zedong, the founding Chairman of the Chinese Communist Party (CCP), encouraged the digging of tube wells, powered by gas or electric pumps, to draw water from aquifers.

New water conveyance systems, such as the South-North Water Diversion, were designed to shift water from the humid south to the drier, industrialized north. As Chinese society has become more complex, urban and industrialized, however, there is a greater demand for the state’s approach to water management to evolve beyond merely shifting water around the country.

In contemporary China, it is not enough to merely control water. The state is increasingly tasked with predicting where natural disasters, such as floods, will occur and informing residents well ahead of time. A recent failure to notify citizens of impending floodwaters in a timely manner led to many angry social media commentators and, more tragically, the loss of lives. The failure of the state’s emergency response systems has led many social media commentators to question the official narrative surrounding the flood and the ability of the government to manage disasters.

Complaints from civilians about the lack of disaster planning and response in China are not new and are unlikely to significantly affect the central government, as blame is often shifted to local-level officials.

In 2012, after widespread floods struck Beijing, for example, residents took to social media to castigate the local mayor and other city officials. More recently, President Xi Jinping and Premier Li Keqiang shifted responsibility for flood deaths away from the political center by accusing local officials of ineptitude in dealing with flood risks. They have both stated that these negligent officials will be held accountable. The CCP’s legitimacy is generally undisturbed by day-to-day mismanagement of water or a failure in disaster warning systems; only a catastrophic failure of a large, state-led infrastructure project is likely to harm the central government.

The CCP has gained some of its legitimacy to rule through the control of the country’s water resources. This began in the 1950s when Mao Zedong led China into a series of “wars against nature,” designed to highlight the prowess of the Party in bending the natural environment to its will. During Mao’s time in office, 80,000 dams were built, many of them poorly. By 1980, 3,000 of them had collapsed.

One of the largest disasters to befall China occurred in 1975 due to the failure of the Banqiao Dam in Henan province. After Typhoon Nina swept across the region, the dam gave way, rapidly releasing 700 million cubic meters of water and killing an estimated 250,000 people. Perhaps fearing the damage this would do to the CCP’s legitimacy, the disaster was kept a state secret and the officials in charge were promoted to ensure their compliance.

It is far more difficult to maintain secrecy in modern China. In the aftermath of recent floods, which were the most destructive since 1998, a number of urban residents complained that the government had prioritized rapid development over effective water management.

Over the past 35 years, China has built more than 450 new cities, urbanized 40,000 square kilometers of land and paved 60,000 kilometers of highways. These structures prevent water from seeping into the ground, instead leaving it to pool and run off hard surfaces. Drainage systems have been built to carry stormwater away from urban areas and help alleviate flooding; however, in the haste to build cities, the pace of construction of these systems failed to match that of the urban expansion occurring above them.

State officials have been quick to acknowledge that drainage systems in urban areas are poorly designed. The government has launched a program designed to build “sponge cities,” urban areas that are naturally able to hold, clean and drain water. Upgrades to stormwater drains and new roads built and paved with porous materials have begun to be built in parts of the country. In the aftermath of widespread floods, and the complaints that they generated, the development of sponge cities is likely to continue apace.

China is not just a hydraulic society, and its officials are concerned with more than just the management of water. The control of water alone does not guarantee political survival, but history suggests that the effective management of water does play a role in maintaining political control. Chinese leaders, therefore, ignore water risks at their own peril.

Xianbin Yao Professorial Lecturer of International Studies at De LaSalle University Manila
URL: https://www.brinknews.com/crisis-water-management-in-china-the-key-to-political-control/
Get ahead in a rapidly changing world. Sign up for our daily newsletter. Subscribe
​​