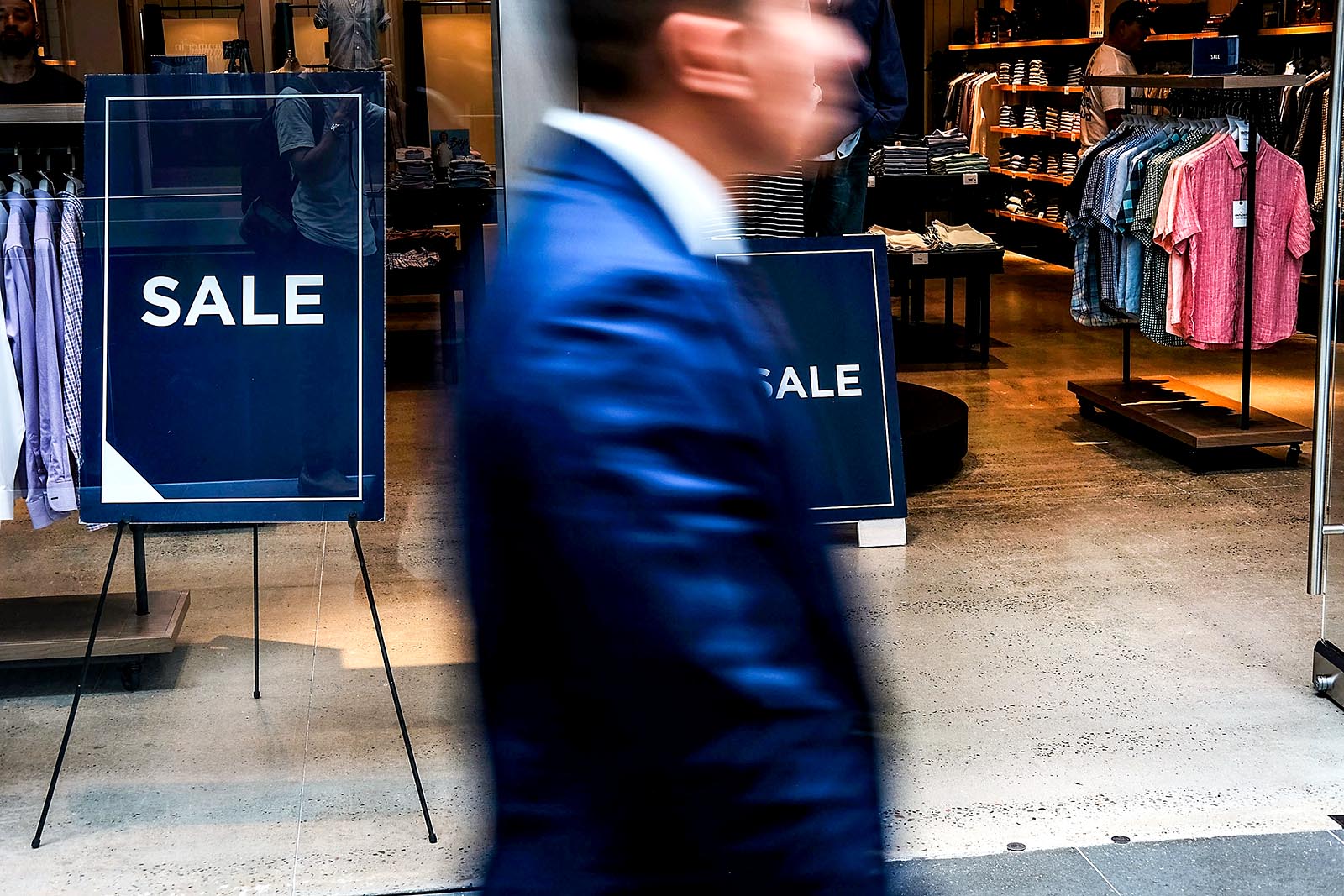 A store advertises a sale in a window of a Manhattan shopping mall in New York City. Giving Tuesday is an opportunity to consider how our retail and consumer habits can be made more sustainable.

This year, the shopping frenzy of Black Friday grossed at least $23 billion in the U.S. And while foot traffic in stores was down slightly, online sales grew about 23 percent. Black Friday got its name because it’s the time of the year that retailers start turning a profit for the year, that is, going from red to black. That sounds good, but it’s originally attributed to Philadelphians who lamented the crush of visitors crowding the city the day after Thanksgiving for a mix of shopping and football. The negative connotations returned to the fore in 2008, after someone was trampled to death by aggressive shoppers, the first of 11 deaths since.

The shopping mania is now eating into Thanksgiving itself and stretching through Monday. It’s spreading geographically, too. Despite the fact that Europeans do not celebrate the Thanksgiving holiday, the Black Friday weekend generated at least $24 billion in Europe in 2017—more than half of U.S. sales during the same period.

Today, however, is the seventh annual Giving Tuesday, a national day of philanthropy that, last year, raised $274 million for thousands of nonprofits. If we see growth this year in line with last year’s, donations could top $400 million. That would be an inspiring display of generosity, but there’s still more we can do—as individuals, executives, scientists, farmers, and policymakers—both in the short term and over the long haul.

The online retail sector can do more to shrink its environmental impact by offering customers incentives to shop and ship more sustainably. People often take the fastest free delivery that’s offered, even if they don’t need their purchases in two days or less. By making it easier and more financially advantageous for customers to wait an extra day or two, retailers can use their transportation networks more efficiently, sending more packages to the same place and relying more on trucks over air freight. Making truck fleets more energy efficient—perhaps running on electricity or natural gas—would also shrink companies’ footprints.

Offering sales on a limited basis drives opportunistic purchasing. But companies can do themselves and the planet a service by allowing their customers to buy discount coupons that can be redeemed in the future for items as they are actually needed by the consumer. This could build brand loyalty rather than one-off consumption for consumption’s sake.

Consuming more conscientiously is especially important to consider this time of year. Perhaps we can change Black Friday to Green Friday.

Retailers and brands can commit even more to recycling raw materials—this goes for packaging, clothing, toys, electronics, appliances, cars, and more. Committing to a 5 percent increase in recycled content per year over the next 10 years would allow companies to reclaim millions of tons of materials that would otherwise require tremendous amounts of land, water, and energy to produce.

Online Shopping Could Be More Sustainable

Individual consumers can help, too. Shopping online may turn out to be environmentally preferential than going to stores in many common scenarios. According to an analysis conducted at the Massachusetts Institute of Technology, shopping online can have a smaller carbon footprint than shopping at retail for many consumers, especially those living farther away from the stores they would drive to. Even for an urban customer, the carbon footprint of driving to the store is greater than the total footprint for an average online shopper. A bonus for the retailers: Online shopping enhances inventory control, reducing costs as well as excess consumption at the wholesale level.

Individuals can also support and encourage more sustainable production by looking for more recycled and eco-certified products during the holiday season. For paper and timber products, from gift cards to furniture, people can look for the Forest Stewardship Council label, signifying the product is made from wood that is harvested in ways that keep forests healthy. Energy efficient appliances can reduce carbon emissions while shrinking electricity bills. Wasting less of everything—food especially—is one of the most effective ways to shrink one’s carbon footprint.

Humanity is taking more from the planet than it can sustainably yield, not just on Black Friday but year-round. According to the Global Footprint Network, we’re consuming about 1.6 Earths’ worth of natural resources. If the planet is an investment, we’re eating into the principal at an unsustainable pace.

Consuming more conscientiously, buying what we need when we need it and less of what we don’t need, and recycling more than we currently do is especially important to consider this time of year. And in due time, perhaps we can change Black Friday to Green Friday.

Abhi Bhuchar Head of Consumer and Industrials, and Energy, Asia Pacific at Oliver Wyman Nicholas Tonkes Partner at Oliver Wyman Eddison Lee Principal at Oliver Wyman
URL: https://www.brinknews.com/turning-black-friday-green/
Get ahead in a rapidly changing world. Sign up for our daily newsletter. Subscribe
​​