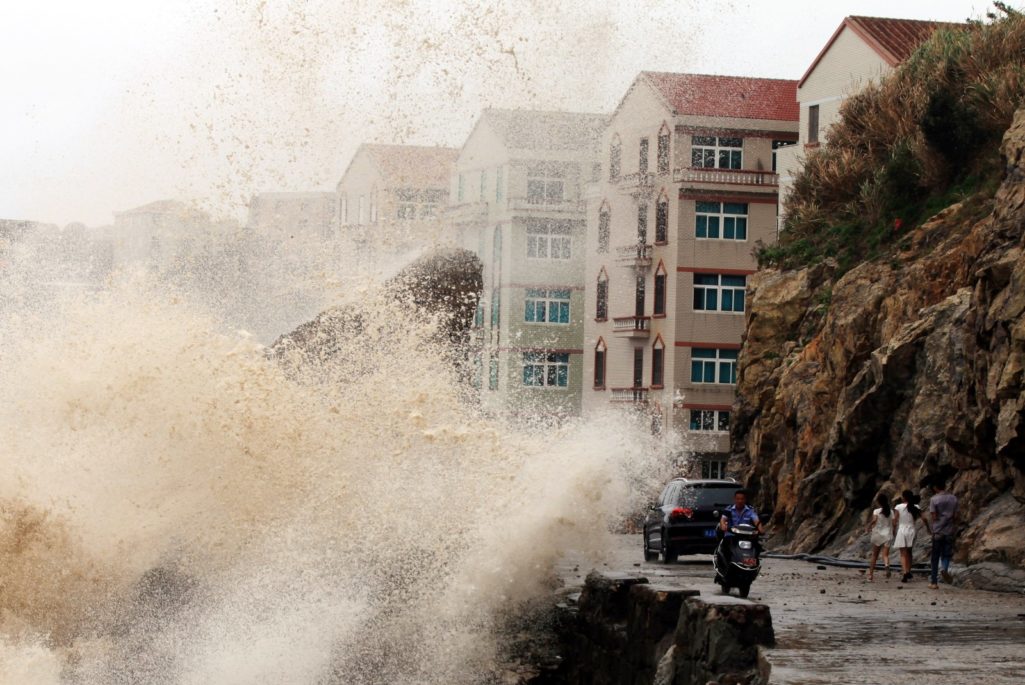 A huge wave surges onto a road in Wenling, east China's Zhejiang province as typhoon Soudelor draws near the mainland of China on August 8, 2015.

Editor’s Note: This is the first article in BRINK’s special series on extreme weather.

Frequent extreme weather events, heat waves, and sea level rise are among the many disastrous consequences that come with global warming. The impacts of these extreme events are particularly significant in the Asia-Pacific region because of its rapid growth in the last few decades, making many established megacities without climate-conscious designs vulnerable.

According to the Intergovernmental Panel on Climate Change’s Fifth Assessment Report in 2013, it is unequivocal that the current rise in global temperature is largely contributed by human activities. The temperature rise will continue if fossil fuels remain the main source of energy for such activities. Indeed, if no change is made (the so-called “business-as-usual” scenario), the global temperature by the end of this century could be nearly 5 degrees Celsius warmer than the end of the last century.

As temperatures rise, the atmospheric flow patterns can become unstable for a longer period of time, which could lead to prolonged periods of high temperatures. With the increased affluence of Asia-Pacific countries, more air conditioning will be used for cooling, which will contribute to further warming of the air. This temperature rise will be further exacerbated by heat generated by industries and vehicles, as well as the retention of heat by buildings, pavement and roads.

The increase in the use of air conditioning will create a substantially stronger demand for electricity, which could lead to power outages. The loss of power will not only lead to health problems such as heat strokes, shortness of breath and dehydration but also to disruptions in subway, train and flight transportation, businesses such as banks, stock market and data centers, and industrial production. Power outages could become even more frequent in the Asia-Pacific region due to the design of electricity production and provision that may not be able to keep pace with this rapid increase in the demand.

It has been well documented that, during the last few decades, the frequency of heavy rain and the overall rainfall intensity (amount of rain per hour) have increased in many places around the world. This is another result of global warming, mainly because a warmer atmosphere can hold more moisture. Condensation of the additional moisture will lead to heavier rain and higher rainfall intensity, which will lead to greater chances of flooding. Coastal regions in Asia-Pacific countries are also affected by tropical cyclones, which deliver both heavy rain and seawater through “storm surges”. Storm surges are further enhanced by the rise in sea level, due to thermal expansion of seawater and melting of polar ice caps as a result of global warming. Thus, the chance of flooding in these countries will increase substantially in the future.

The impact of flooding can be disastrous. Not only can it lead to fatalities, its effects on agriculture – the livelihood of millions of people in the Asia-Pacific region – can also be significant. In addition, flooding in cities can cause damage to residential properties, businesses, underground structures such as parking, shops and storage, and infrastructure for subways, traffic tunnels and roads. Heavy rain can also trigger landslides in areas with steep terrain or heavy deforestation, both present in the Asia-Pacific region, which can lead to fatalities, damage to property and roads, and severe flooding to the downstream areas from flash floods.

Drainage systems in many megacities in the Asia-Pacific region were designed many years ago and are not adequate to accommodate the expected increases in rainfall frequency and intensity. Without appropriate design, the chance of flooding in these cities is therefore much higher than better-prepared cities as global warming increases. Similarly, if coastal defense structures like levees, dykes and sea walls are not built to heights and strengths that can withstand the type of storm surges that are expected, flooding will occur more frequently.

In anticipating the magnitude of sea level rise, consideration should be on the extreme rise rather than the average rise because most of the flooding events in coastal areas are caused by storm events that can bring about an extreme in the water height. In other words, in the design of coastal defense structures, one must use the projected extreme level rather than the average rise.

While some areas in the Asia-Pacific region face excessive rain, other places are more likely to have prolonged droughts. Because agriculture and aquaculture are very important to this region in particular, such droughts can have severe environmental and economic consequences. In addition, accompanying the rapid growth of the Asia-Pacific region is a significant rise in population and an increase in industrial production, both of which put a substantially heavy demand on water. Any prolonged drought can lead to reduction of industrial production and water rationing. Regions that depend on hydroelectric power for electricity generation also will be affected.

With the increase in the frequency of extreme weather events due to global warming, we can expect a range of significant impacts on the Asia-Pacific region, partly because of its rapid growth and lack of planning (or planning not being able to keep pace with the region’s growth). As a result, extreme events – heat waves, flooding, sea level rise and droughts – can bring disastrous consequences including loss of lives, property, industrial production and business disruption.

The effects of these extreme events may extend beyond the local area. For example, flooding of an industrial park in Thailand in 2013 caused almost total disruption in the global supply of computer hard disks and spare parts for automobiles. The prevalence of the “just-in-time” philosophy for industrial production means that any break in any part of the supply chain, even one far away, can lead to severe disruption in the entire production process. The loss of agricultural products due to heat waves, flooding or drought in one area can easily lead to a shortage of food supply elsewhere.

Global warming is inevitable — even though it is hoped that its growth rate can be reduced through concerted efforts from all countries. It is important that adaption measures be designed and implemented so that the region cannot only survive but can continue to thrive.

Professor Johnny Chan is chair professor of Atmospheric Science and Director of Guy Carpenter Asia Pacific Climate Impact Center at the School of Energy and Environment, City University of Hong Kong. He is a fellow of the American Meteorological Society, an honorary fellow of the UK Energy Institute and Chair of the Tropical Cyclone Panel of the Working Group on Tropical Meteorology Research of the United Nations World Meteorological Organization.

Mark Campanale Founder and Executive Chair of The Carbon Tracker Initiative
URL: https://www.brinknews.com/urban-planning-crucial-to-mitigating-extreme-weather-risk-in-the-asia-pacific-region/
Get ahead in a rapidly changing world. Sign up for our daily newsletter. Subscribe
​​