Why Aviation Needs to Address Its Emissions Problem Now 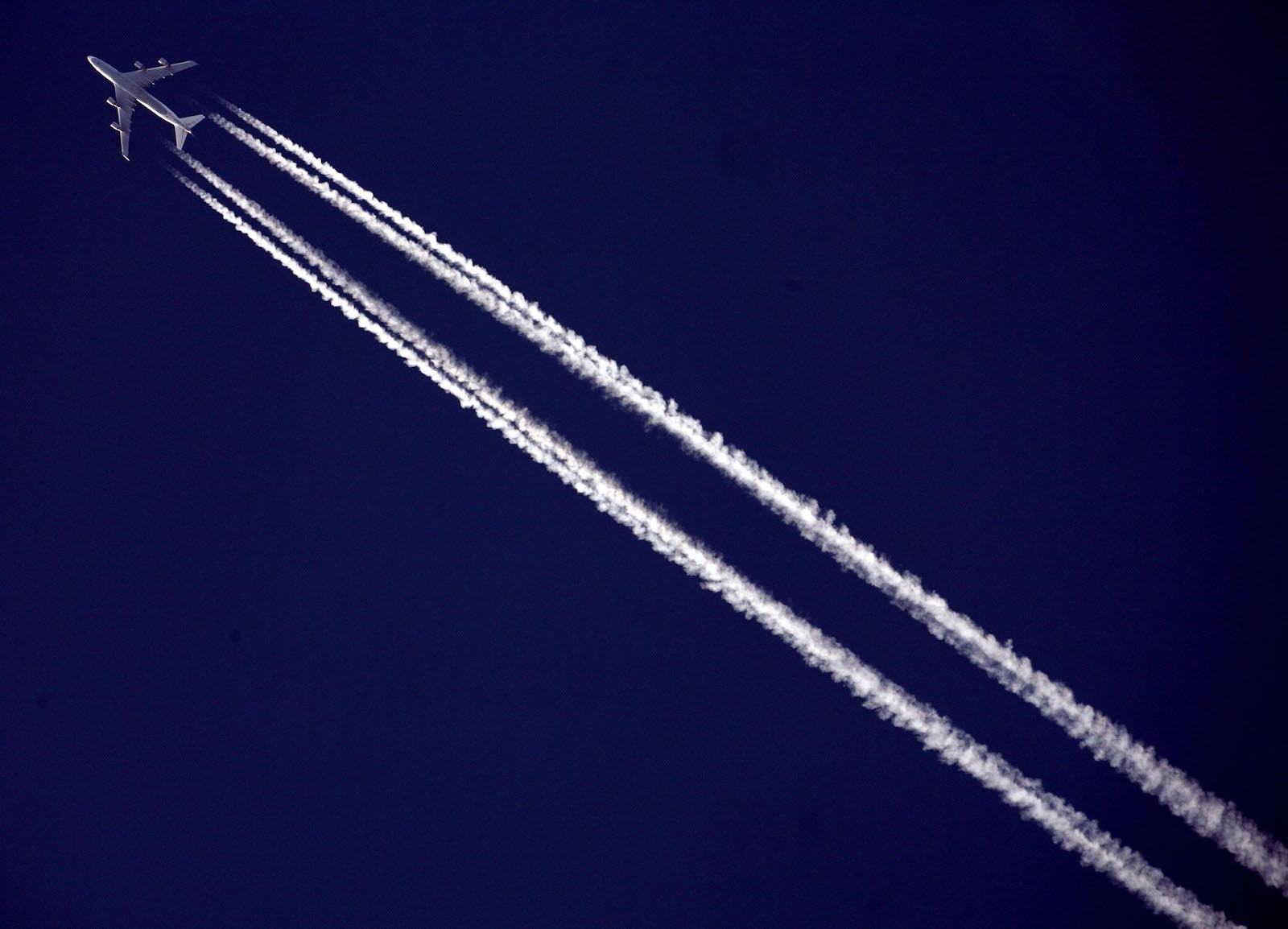 A passenger jet aircraft flies in the skies above Heathrow Airport in London, England. Emissions from aircraft are a major contribution to rising carbon emissions in the U.K. and the government is trying to set targets to cut them by 2050.

Today, aviation as an industry contributes a relatively small percentage of global carbon emissions, thanks in large part to 50 years of efforts by aerospace and aviation to increase aircraft energy efficiency. Since the 1960s, aerospace manufacturers have pushed the envelope to reduce aircrafts’ fuel consumption, and those efforts continue today with unprecedented turnover to modernize airline fleets, as well as add tools and tactics to optimize flying procedures and routes to minimize fuel burn.

Amid continuing environmental pressures, the industry has also been investigating biofuels and other non-fossil fuel alternatives.

Pioneers on the aerospace side are investing in research and development on game-changing technologies like electric batteries and hydrogen fuel cells for aircraft to reduce industry reliance on fossil fuels. And the International Air Transport Association and the International Civil Aviation Organization continue to work with the industry to set targets and encourage carbon-offset programs that will support a reduction in aviation’s greenhouse gas emissions.

While all of these efforts are admirable, the industry and these international organizations are unlikely to succeed in reducing aviation emissions, given the current hurdles. In fact, the case is quite the opposite.

Aviation’s contribution to global carbon emissions — currently estimated at about 2% to 3% — is almost certain to rise over the next decade by a substantial amount, and at the moment, the options to prevent it are limited.

The challenges are numerous. First, the industry has pushed energy efficiency in fossil fuel engines about as far as it can.

Innovations might improve efficiency by 1% or 2% each year moving forward, but demand for air travel is projected to grow about 5% annually for most of the next decade, at least. According to a United Nations-sponsored report from the International Civil Aviation Organization, the share of emissions from global aviation could reach 27% by 2050, assuming there are no technological breakthroughs and that other industries continue to make progress reducing their emissions.

On the technology front, there is justifiable hope that hybrid engines might be developed that add an electric propulsion component to current technology. But research efforts are still limited, and a commercially viable solution may be a decade away. The timeline for a totally electric, large commercial airliner could be more than two decades off, despite recent prototypes of small planes.

Biofuels face similar hurdles, even though they’ve been around for decades. Sustainability is a key concern, since some are based on agricultural products like corn, and they would use up land that could otherwise grow food for people. Other biofuels based on waste are still not cost-competitive with fossil fuels. There is also simply not enough biofuel feedstock or production capacity yet to make it a real alternative.

Aviation’s emissions share may also rise because some other industries are seeing more success substituting zero-carbon technologies. For instance, the automotive industry is making progress, as sales of hybrids and electric vehicles exponentially increase and prices for them become more affordable. Of course, the automotive sector is also helped by the fact that the number of people seeking to own cars isn’t growing the way it once did, a trend that increases the percentage of hybrids and EVs on the road.

Probably the biggest strides have been made in electricity generation, where a switch to renewable energy sources — particularly solar photovoltaic systems and wind turbines — has already reduced that industry’s share of emissions, despite the growth in demand for electricity. Even the traditional energy sector, where the primary product remains fossil fuels, is showing improvement through substantial investment in renewable generation.

While the industry identifies the right path forward for radical redesigns, it needs to figure out short-term strategies to prove its commitment to reducing emissions.

Unless aviation, as an industry, can demonstrate it is taking meaningful action to reduce emissions on a pathway that is consistent with international climate goals, it runs the risk of governments imposing rules to limit demand. As climate impacts become more severe, the call for action is likely to become more urgent and proposed regulation more stringent.

The Risk of Regulation

This is likely to happen first in Europe, where regulators and policymakers alike have been keen to legislate to generate action.

For example, the industry already faces penal measures to protect consumers with the implementation and more recent rigorous enforcement of Flight Compensation Regulation 261/2004, commonly known as EU261, and the European Commission’s new Green Deal proposals mention bringing more aviation under the emissions trading system and re-examining the tax-free status of kerosene. Over the next two decades, the auto industry faces prospective bans on sales of new internal combustion vehicles in several nations.

The public discourse is already beginning to point fingers at aviation. For instance, in Sweden, where “Flygskam,” or flight shame, the anti-flying movement, originated, we see demands for greater energy efficiency in transportation choices. There are also calls in Germany for expansion of passenger rail to reduce domestic flights.

And while this criticism and regulatory pressure may start in Europe, it is likely to spread to other parts of the world. This is especially true as more negative effects from climate change are felt, such as the fires laying waste to parts of Australia, Brazil and the United States and the increase in severe storms in both the Atlantic and Pacific.

Need to Focus on Design

What should be the industry’s response? One sure thing it should not be and will not be is silence. Sadly, there is no one “silver bullet” solution since most of the known alternatives have limitations or drawbacks. If the industry is to limit or avoid disruptive regulation, it must show unwavering commitment to a path forward and importantly, cooperation and coordination.

A natural step is a commitment to transformational change in aircraft design rather than the incremental improvements, which have been the norm in many of the recent new programs.

Moving forward, aviation will be expected to embrace and leverage step changes in engine and aircraft technology, including the obvious, much-debated option of hybrid propulsion. And whatever unique solution or combination of technologies and innovations rises to the forefront in the coming years, the assumed time-to-market will be key, informing decisions on the need for and depth of environmental regulation.

The aviation ecosystem will have to develop and adopt ways of reducing the design and new product introduction cycle, leveraging technologies such as digital manufacturing systems but keeping safety paramount.

While the industry works hard on identifying the right path forward for more radical redesigns, it will need to figure out short-term strategies to prove its commitment to reducing emissions, such as pushing hybrid gas-electric solutions, improving inflight efficiencies to reduce fuel consumption and developing tools that remove carbon dioxide from the atmosphere and convert it into carbon-neutral synthetic fuels.

This needs to be in addition to following recommended carbon-offsetting regimes and improving and incentivizing eco-friendly operations. This coming year will be an important one for the industry, as international pledges begin to come due.

Rather than make life difficult for aviation, governments need to work with the sector to help bring about the necessary transformational change by providing clear regulatory signals, exploring opportunities for public-private partnerships and encouraging R&D investment. More than 65 million jobs are supported worldwide by aviation and related tourism. And if aviation were a nation, its gross domestic product would rank as the 20th largest economy in the world, considerably larger than some members of the G-20. At the end of the day, solving aviation’s problems is in everyone’s interest.

David Stewart is a partner in Oliver Wyman’s transportation and services practice.

Alan Eberstein is a principal in Oliver Wyman’s Aviation Aerospace and Defense Practice. He has worked extensively with industry clients across the globe for the last 10 years.

Til Schuermann Partner and Co-Head of Oliver Wyman’s Risk & Public Policy Practice
URL: https://www.brinknews.com/why-aviation-needs-to-address-its-emissions-problem-now/
Get ahead in a rapidly changing world. Sign up for our daily newsletter. Subscribe
​​