Will the ‘Rise of the Machines’ Require a Unique Human Response? 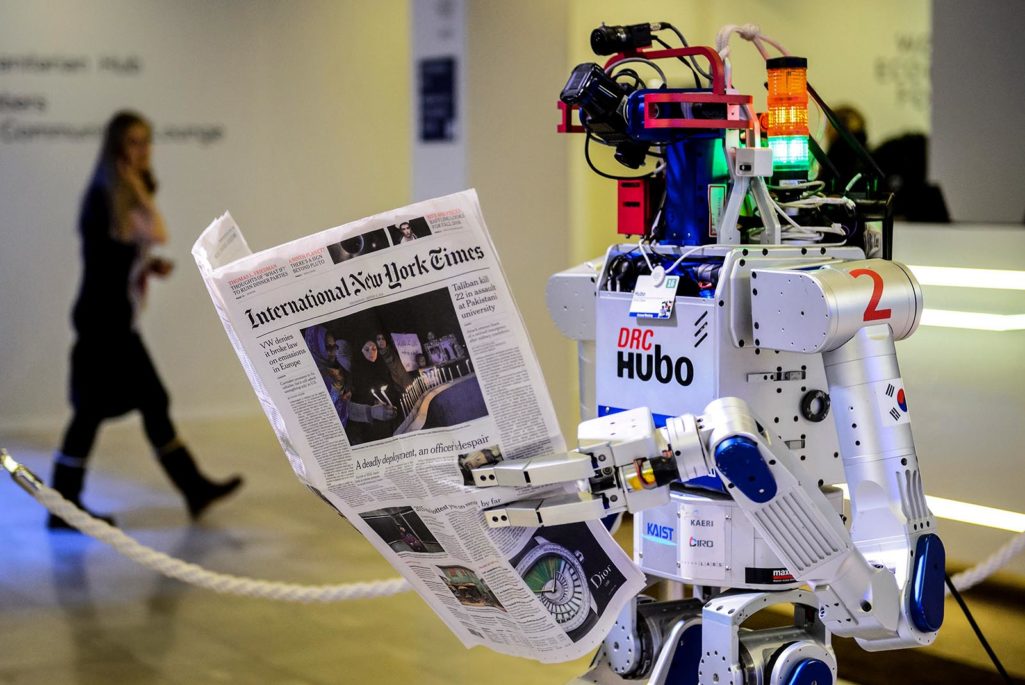 A robot holds a newspaper during a demonstration during the World Economic Forum annual meeting in Davos, on January 22, 2016. The world must act quickly to avert a future in which autonomous robots with artificial intelligence roam the battlefields killing humans, scientists and arms experts warned the Davos attendees.

Automation anxieties have accelerated in recent years, as our increasingly smart machines are now being applied to activities requiring cognitive, physical and social capabilities that not long ago were viewed as the exclusive domain of humans. Concerns surrounding artificial intelligence (AI) and its long-term impact may well be in a class by themselves. Like no other technology, AI forces us to explore the very boundaries between machines and humans.

Few topics are as important as the future of work in our 21st century digital economy, given our justifiable anxieties about technological unemployment. “The economic challenge of the future will not be producing enough. It will be providing enough good jobs,” said Harvard professor and former Treasury Secretary Larry Summers in a 2014 Wall Street Journal article.

These concerns are not new. People have long worried about the impact of technology on the economy, be it railroads, electricity and cars in the Industrial Age, or the internet, mobile devices and the plethora of smart products now permeating just about all aspect of our lives. These worries have been with us since the early days of the Industrial Revolution. Two centuries ago, the so-called Luddites famously smashed the new weaving machines that were threatening their jobs.

Automation anxieties continued to resurface in the 19th and 20th century, right along with accelerating technology advances. In a 1930 essay, English economist John Maynard Keynes wrote about the onset of “a new disease” that he named “technological unemployment,” defined as, “unemployment due to our discovery of means of economizing the use of labor outrunning the pace at which we can find new uses for labor.”

“Previous technological innovation has always delivered more long-run employment, not less. But things can change,” said The Economist in a January 2014 article. “Nowadays, the majority of economists confidently wave such worries away. By raising productivity, they argue, any automation which economizes on the use of labor will increase incomes. That will generate demand for new products and services, which will in turn create new jobs for displaced workers. Yet some now fear that a new era of automation enabled by ever more powerful and capable computers could work out differently.”

Automation is impacting knowledge workers who not so long ago felt confident that their high-skill jobs were safe.

Fifty years ago or so, computers and the IT industry started to automate processes in just about all industries. Process automation has been most successful when applied to routine tasks that follow precise, well-understood procedures governed by a set of definitive rules. These include physical activities in manufacturing and other forms of production, as well as information-based services such as airline reservations, record-keeping and many kinds of administrative tasks. Not only have these activities been more prone to automation, but to outsourcing to lower-wage countries as well.

That said, AI, robotics and other advanced technologies are now challenging these labor market assumptions. AI-based machines now assist in the diagnosis and treatment of rare forms of cancer and navigate our roads as self-driving cars. Beyond factory workers, bank tellers and fast-food employees, this new era of automation is beginning to have an impact on knowledge workers who not so long ago felt confident that their high-skill jobs were safe.

What impact will AI have on jobs? Could our smart machines lead to mass unemployment?  What can we learn from history that will help us better respond to AI’s advances?

Massachusetts Institute of Technology economist David Autor explored the lessons from history in a 2015 paper, Why Are There Still So Many Jobs? The History and Future of Workplace Automation. Dramatic declines have occurred in a number of occupations over the past 100 years. The percentage of U.S. workers employed in agriculture has declined from 41 percent in 1900 to 2 percent in 2000. Cars drastically reduced the demand for blacksmiths and stable hands, machines have replaced many manual jobs in construction and factories and computers have been steadily displacing large numbers of record-keeping and office positions.

Given the automation of so much human work over the past couple of centuries, why are there still so many jobs left? The answer isn’t very complicated, although frequently overlooked. As Autor succinctly put it: “Tasks that cannot be substituted by automation are generally complemented by it.” Automation does indeed substitute for labor; however, automation also complements labor, raising economic outputs in ways that often lead to higher demand for workers.

Most jobs involve a number of tasks or activities. Some of these tasks are more susceptible to automation, while others require judgement, social skills, tacit knowledge and other human capabilities. Just because some of its tasks have been automated does not imply that the whole job has disappeared. To the contrary, automating the more routine parts of a job will often increase the productivity and quality of workers by complementing their skills with machines and computers, as well as enabling them to focus on those aspect of the job that most need their attention.

An example of this collaborative automation process is seen in the rise of automated teller machines (ATMs), which started taking over some of the more routine tasks of bank tellers in the 1970s. By 2010, there were approximately 400,000 ATMs in the U.S.; however, not only were bank tellers not eliminated, but their numbers rose modestly from 500,000 in 1980 to 550,000 in 2010. Replacing some bank employees with ATMs made it cheaper to open new branches while changing their work mix away from routine tasks and toward tasks such as sales and customer service that machines could not do.

“As with the introduction of computing into offices, AI will not so much replace workers directly as require them to gain new skills to complement it …” said The Economist, before adding a cautionary note. “Even if job losses in the short term are likely to be more than offset by the creation of new jobs in the long term, the experience of the 19th century shows that the transition can be traumatic.” Industrialization led to major increases in productivity, income and living standards over the long run, but it took significantly longer than is often appreciated. “[D]ecades passed before this was fully reflected in higher wages. The rapid shift of growing populations from farms to urban factories contributed to unrest across Europe.  Governments took a century to respond with new education and welfare systems.”

No one can really tell if technology will once more create more jobs than it destroys, or if this time will be different and AI will end up replacing many jobs, including high-skill ones, while creating few new ones.  Regardless, we cannot ignore this important and challenging issue. Even if AI doesn’t lead to mass unemployment, technological advances are already disrupting labor markets and contributing to social unrest.