Are Negative Interest Rates on the Way in the US? 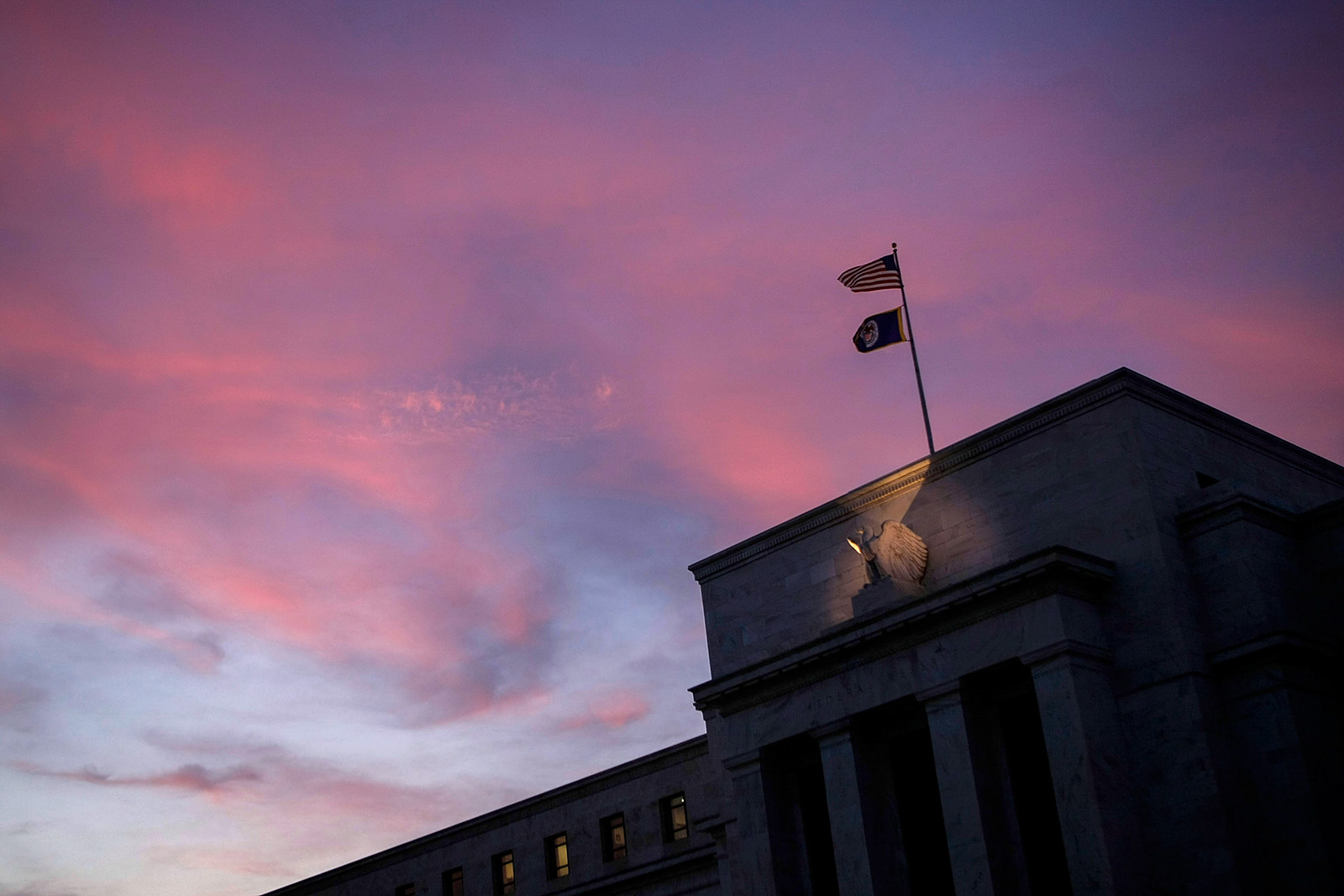 The Federal Reserve is seen on the National Mall in Washington, D.C. While negative interest rates have been a distinguishing feature of many other economies for some years now, the concept has not been a serious possibility in the U.S. until recently.

First it was former Federal Reserve Chairman Alan Greenspan saying in August that he sees no barrier for U.S. Treasury yields going negative. Then, President Donald Trump called on the Fed this month to drive interest rates negative in order to stimulate the economy. While negative rates have been a distinguishing feature of the Japanese economy and many European economies for some years now, the concept has not been a serious possibility in the U.S. until recently.

The concept basically involves a charge to banks for holding reserves. That cost would be intended to spur them to lend more, which — along with lower rates more generally — would presumably drive economic growth. Negative rates on government securities held by the public are another possible scenario. Mr. Greenspan told CNBC that investors should watch the yield on the 30-year note to see if negative interest rates are in the offing.

The Europeans Are Already in Negative Territory

Today, there is some $16 trillion in negative government securities worldwide. The European Central Bank (ECB) cut its interest rate 10 basis points to a record low of -0.5% on September 12 and ordered a new round of quantitative easing ($20 billion in bond purchases and other financial assets) in November. Such bond buying drives down yields and cuts borrowing costs. The ECB also recommended some spending stimulus for countries in order to boost European Union economies.

But, generally, while lower interest rates can whittle down government debt, they also subtract from the returns earned by banks and individual savers. And when rates turn negative, it is not clear exactly what the bottom-line effects may be long term across the economy. Some observers say negative rates could lead to a slow-growth environment from which it would be difficult to escape. Others contend the overall effect would be to stimulate the economy.

In addition to long-term trends, the immediate cause for the U.S. is likely trade tensions, which have touched off an investor flight to the perceived safety of U.S. government securities. That has pushed interest rates lower. And that all piles on to a longer-term drift downward for rates, long underway and led by a slowing economy. Japan, for example, has had negative rates since 2016.

The slowing of economic growth is sometimes blamed on “secular stagnation,” according to Wharton professor of legal studies and business ethics Peter Conti-Brown on a recent segment of the Knowledge@Wharton radio show on SiriusXM.

Secular stagnation has been defined as “a prolonged period in which satisfactory growth can only be achieved by unsustainable financial conditions.” U.S. economic growth, while steady, has been lackluster at a time when the current expansion since the Great Recession is the longest on record. For reasons not well understood, Mr. Conti-Brown added, inflation is low despite very low unemployment.

The low-growth economy is partly due to demographics — an aging workforce — said Lisa Cook, a professor of economics and international relations at Michigan State University, who also joined the radio show. “We have a population that is not only aging but leaving the workforce,” and that is a drag on the economy.

Given the exodus from the workforce, retirees will depend more on their savings, and thus negative interest rates “will have tremendous implications for them,” Ms. Cook added. Similar — even stronger — trends are at play in Europe and Japan.

When rates hit the so-called zero-bound, the Fed’s potential influence is thought to be at the end. Negative rates could change that.

Typically, when interest rates remain low for a long period, inflation picks up, but this time that is not happening, noted Wharton finance professor Itay Goldstein, on the radio show. It’s time to challenge the old paradigms because something structural seems to have changed. At the same time, cheaper money has flowed freely into boosting asset prices, from equities to bonds and real estate, he added. “So maybe this is where we see the effect. But we don’t see it in prices of goods. We don’t see it in inflation.”

In any case, the Fed is left today with less power to influence financial markets given that rates are already so low. When rates hit zero, the so-called zero-bound, the Fed’s potential influence is thought to be at the end. Negative rates could change that. Since the Great Recession, lowering rates has not been as effective at stimulating the economy as in the past, and quantitative easing has also lost some of its bite. “So, central banks are asking themselves, ‘What can we do?’” Mr. Goldstein added. One tool is to cut rates to below zero.

Mr. Conti-Brown agreed. He pointed out that Fed Chair Jerome Powell admitted that the Fed’s key estimate of “one of the most important indicators — the unemployment rate, that is the so-called ‘natural rate,’ the rate that it should be targeting — has been wrong. And not just wrong, badly wrong.” While unemployment rates kept slipping down, inflation did not budge, unlike what the models predicted. The relationship between inflation and unemployment “seems to be absent without leave.”

Some observers argue that there is an explanation for inflation’s disappearing act and that an overall lack of demand keeps the economy below its full potential productive capacity. Fiscal stimulus is called for, they contend. The problem with that is ideological and political. With budgets deep in the red and a prevailing mood against adding to debt, more spending would appear to be a non-starter for now.

Would Negative Interest Rates Have Helped in the Great Recession?

Mr. Conti-Brown explained that one way to think about negative rates is to ask if they would have made any difference during the Great Recession. Had the Fed at the time cut nominal interest rates into “deep negative territory,” he added, “is it conceivable that the recovery would have been much, much faster? Yes, it is. This could be a very potent tool.”

Nevertheless, Mr. Conti-Brown added that the question remains whether or not the Fed has the legal right to move rates below zero and whether or not, institutionally, the Fed is currently capable of taking what could be viewed as a drastic step. What’s more, political resistance would be strong, and the panelists agreed that politics is increasingly important in influencing the Fed’s interest rate policies.

What Effect Would It Have on the Financial System?

“This is how they make their spread. They might face difficulties making money and generating profits in a new world like this,” Mr. Goldstein said. If they are charged for putting money with the Fed, and “they can’t necessarily transfer the negative rates to their depositors, that might cause big difficulties for banks.”

Patrick Harker, president of the Federal Reserve Bank of Philadelphia, made a related point in a recent Knowledge@Wharton interview: “We don’t have a lot of room to move rates. … Moving rates 50 basis points is not going to have a demonstrable effect.

Then, it also creates other risks, because there’s a third component of the Fed, not in our dual mandate, but very important — financial stability. There is ample evidence that [interest] rates being this low for this long, start to create situations of financial instability.”

Nevertheless, the three panelists agreed that at this point, we are more likely to see negative rates than not.

This piece first appeared in Knowledge@Wharton

Til Schuermann Partner and Co-Head of Oliver Wyman’s Risk & Public Policy Practice
URL: https://www.brinknews.com/are-negative-interest-rates-on-the-way-in-the-us/
Get ahead in a rapidly changing world. Sign up for our daily newsletter. Subscribe
​​