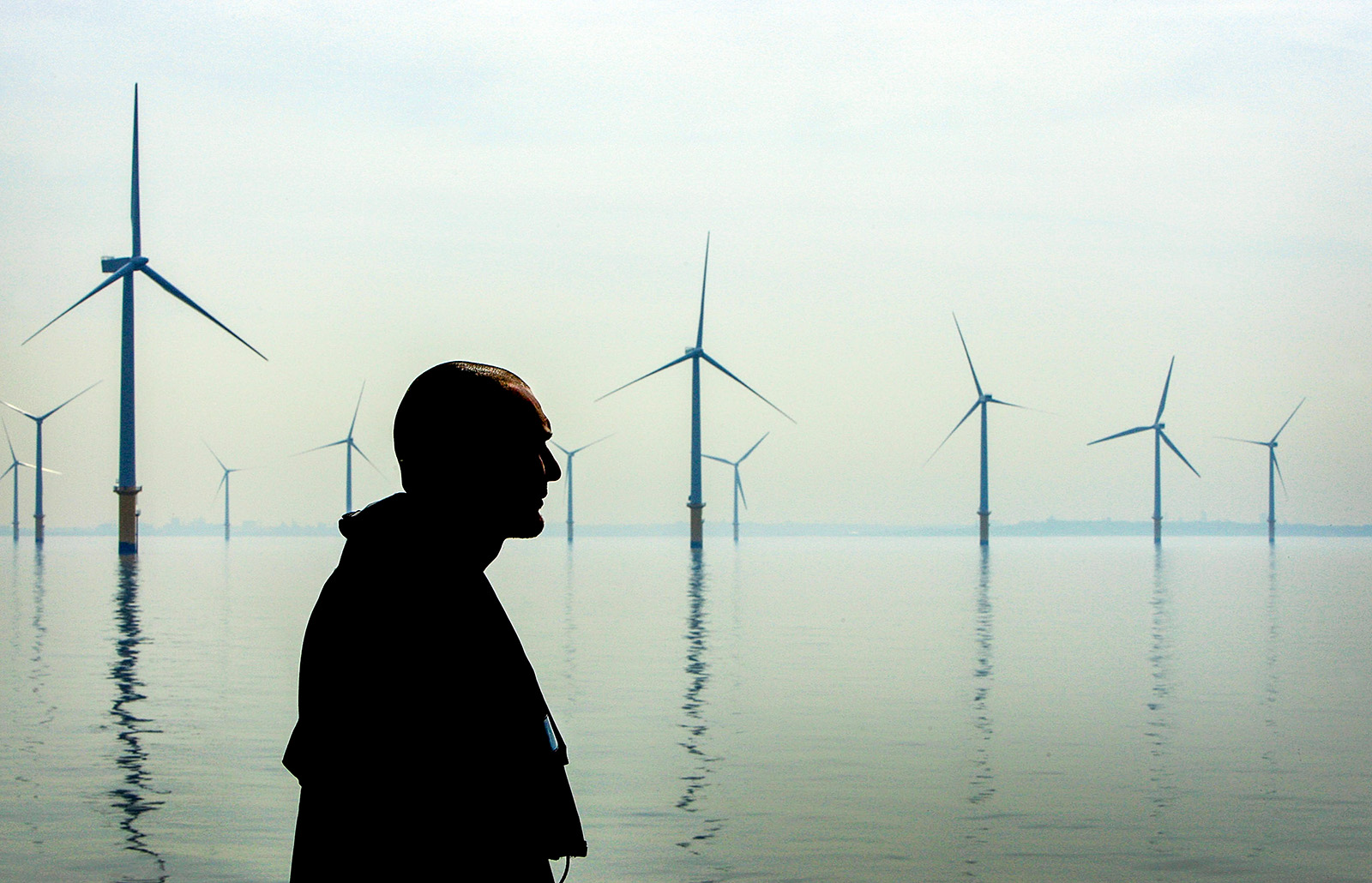 A maintenance worker looks out at an offshore wind farm in Liverpool, England. Extreme weather events in Europe over recent years have contributed to a heightened sensitivity toward climate change.

Despite a recent drop in global investment in clean energy — it slipped to approximately $117.6 billion, a decline of 14% in a year — the European Union is getting ready to turn green into one of its main priorities for the next political cycle.

Ursula von der Leyen, the person likely to become the next president of the EU Commission, is proposing to make the EU carbon neutral by 2050 by unveiling a new “green deal” in her first 100 days in office.

Extreme weather events in Europe over recent years have contributed to a heightened sensitivity toward climate change. This has boosted support for the Greta Thunberg FridaysforFuture movement, and clearly helped environmental parties, notably in Germany, to succeed in the European elections.

But the push is also the result of a growing hope within the EU that green can unlock investments in a continent in need of a growth story.

Can Green Lead Europe to Growth?

The goal is to put the continent ahead of other jurisdictions in harvesting the opportunities of a cleaner economy.

To reach these ambitious goals and to become climate-neutral by 2050, Europe will need between 175 and 290 billion euros in additional yearly investments, according to the European Commission.

Not surprisingly, designing a path toward such a future is proving to be quite complicated. Politicians, nonfinancial corporations and the financial sector are trying to strike the right balance between incentives and punitive actions. But it is still unclear which one of these three players will ultimately be expected to do the heavy lifting and which one will face the most severe punishment in the case of noncompliance.

The Need for a Complete Taxonomy

At the heart of the challenge lies the need for a comprehensive taxonomy for the classification of environmentally sustainable activities.

In other words, as long as there is no definition of what is green and what is brown, progress will be scant or even impossible to achieve. An independent expert group tasked by the European Commission with developing such a taxonomy recently published its 400-pages-long proposal. It is expected to be adopted by the commission once work on it is completed by year’s end.

The European Commission hopes that its recent legislative proposals on disclosures and climate benchmarks based on a comprehensive taxonomy will eventually incentivize and channel private investment into green and sustainable investments.

The Rise of Nonfinancial Reporting …

In June, new EU guidelines were adopted and included into the Nonfinancial Reporting Directive to enhance transparency in corporate reporting. In addition, supervisors such as the Bank of England and Germany’s BaFin have announced that climate-related risks will increasingly be integrated into their financial stability risk assessments.

In other words, most representatives of the financial sector recognize that the train has already left the station. Whether that is the case among the many small- and medium-sized companies that represent the backbone of export-driven economies such as Germany or Italy is not clear yet.

While action is needed fast, without sufficient transition, the disruption to financial and nonfinancial institutions could be severe.

… and Its Implications for Banks

As a consequence, many banks feel that they could be pushed by regulators and supervisors into the role of main enforcers. But if financial institutions are ultimately expected to push and punish clients for noncompliance with sustainable development goals by making financing for their clients more expensive, the initial negative impact on the real economy could be substantial.

If she becomes President of the EU Commission, Ursula von der Leyen is proposing to create “a sustainable Europe investment bank” to unlock substantially more investment in renewable energy.

However, most banks currently lack the necessary data to make a thorough assessment of which activities in which companies can be classified as green or brown. This is not because of bad will, but simply due to the fact that when financing was provided in the past, that type of data was not required. Once the taxonomy is in place, new activities will be properly classified. But it will take time to reevaluate all portfolios according to the new framework.

The key is ensuring a proper transition. And the job would not end there, as the taxonomy needs to evolve over time, since it has to take technological changes into account.

While action is needed fast, without sufficient transition, the disruption to financial and nonfinancial institutions could be severe. According to Mark Carney, the governor of the Bank of England, “The nature of climate risks means that the biggest challenge is in assessing the resilience of firms’ strategies to transition risks.” Transition risks are caused by the adjustments required to create a low-carbon economy.

A proper framework is therefore needed to help the market allocate capital toward activities needed for a carbon-neutral future. Europe can be at the forefront of these efforts. But ultimately the new standards need to become part of a wider, global effort. This is necessary not only to increase the positive cumulative impact of growing green investments, but also to avoid protectionist tendencies if jurisdictions move in opposite directions.

Can Europe Grasp the Opportunity?

Regardless, for Europe, the first step will be to make sure that all parties involved — regulators, the real economy and the financial sector — have the proper incentives to pull in the same direction at the same time. This in itself could incentivize other jurisdictions to move in a similar direction.

The transition to a low-carbon economy is rapidly turning into a chance for Europeans to coalesce around a common goal and prove — once again — that the EU can play a leading role. In a continent gripped by mistrust, increasing fragmentation and the temptation to ringfence entire sectors of the economy, that would be no small thing.