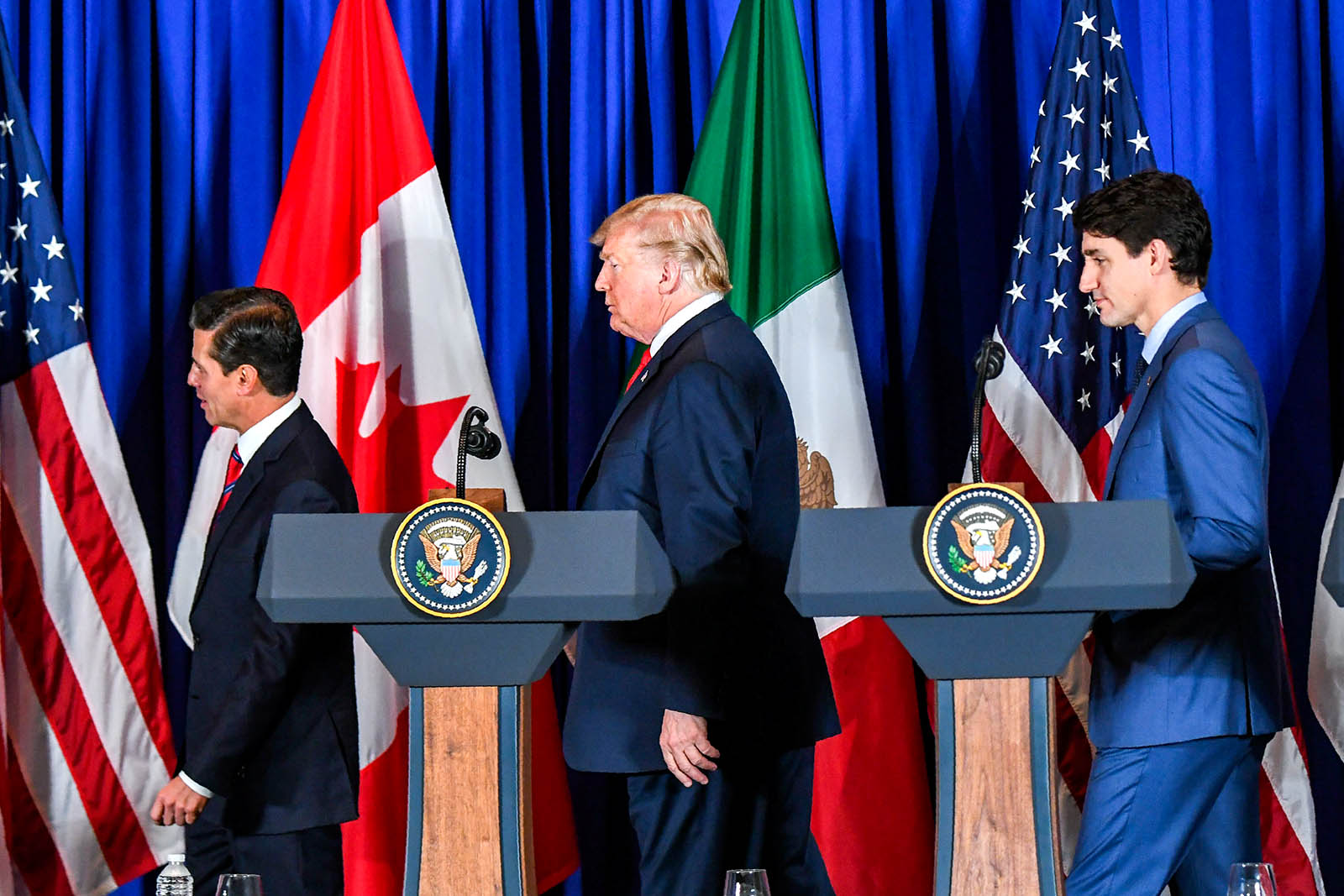 (L to R) Mexican President Enrique Pena Nieto, U.S. President Donald Trump and Canadian Prime Minister Justin Trudeau leave after delivering a statement on the signing of a new free trade agreement in Buenos Aires. Now that the new trade agreement, USMCA, has been signed, it needs to be ratified in each country’s legislature.

In its new form, the USMCA promises to reshape the economic frameworks for the $1 trillion in annual trade criss-crossing the three neighbors every year. Yet, while the trilateral signing event officially ended the negotiating phase, it ushered in the more challenging stage of passing the agreement through each country’s legislature.

In the United States, the government shutdown delayed the publication of the USMCA’s congressional assessment report, which is the next step in the ratification process. Since the U.S. Congress won’t move forward without the report’s publication, the delays are pushing back the entire ratification timetable.

Once the process begins, the USMCA will have to pass through both congressional bodies with a majority vote. It will undoubtedly hit more challenges in the Democrat-controlled House of Representatives. Since the agreement’s signing, Democrat party leadership has signaled its desire for greater enforcement mechanisms for the environmental and labor standards. Meanwhile, a group of Republicans has also voiced concerns regarding the agreement’s workplace protections for LGBTQ individuals.

No Treaty At All?

The Trump administration, too, is poised to add additional complications to the ratification process. On December 1, 2018, President Trump announced that he was planning on formally beginning the six-month process of withdrawing from NAFTA. This measure would apply pressure to Congress by removing the status-quo option of keeping NAFTA and would instead force a vote between the prospect of no regional trade structure and the USMCA.

By any measure, this would be a risky strategy. If Congress rejected the USMCA or could not come up with sufficient votes before the six-month expiration period, tariffs would hit U.S. goods right in the lead up to the 2020 presidential election.

Similarly, in Mexico City and Ottawa, lawmakers are navigating their own legislative processes and challenges.

Until USMCA passes through all three legislative bodies, Mexico, Canada and the U.S. can expect to live with continued uncertainty.

In Mexico, there is no timeframe on when USMCA may come up for a vote, and lawmakers will likely wait for a U.S. confirmation. Before any voting can take place, the country’s Congress must first pass reforms to enshrine the new agreement’s provisions into law, including greater labor protections and the right of Mexican workers to form unions.

In late December, the president’s party introduced legislation to achieve these goals, but it has not yet been debated. Instead, the USMCA provision has been pushed aside as the government prioritizes the battle against fuel theft—with recent government decisions sparking fears of gasoline shortages across the country and garnering more urgency after a recent gasoline explosion killed more than 90 people.

When the USMCA debates kick off in Mexico’s Congress, lawmakers are likely to raise a variety of concerns. Already, parts of the new agreement have been flagged in the Senate, particularly regarding industrial property, rules of origin, and the increased cost of medicine. However, these debates will almost certainly be quelled, as current President Andrés Manuel López Obrador controls majorities in both Mexico’s Senate and lower house. So far, President López Obrador has backed the new agreement, and with his support, USMCA’s passage is unlikely to face any significant obstacles.

Canada has also not yet moved forward on ratifying the USMCA. Similar to Mexico, the country’s Parliament is unlikely to vote on the agreement until after it passes through the U.S. Congress. And given the upcoming fights in Washington, this likely means that it may not come up for parliamentary approval until late spring or fall. Complicating matters further, this vote would then come around the same time as Canada’s October 21 federal elections.

While the USMCA has slipped out of the political spotlight for the moment, it will soon return for what are likely to be a dramatic next few months. The shutdown provided a potential blueprint for what to expect: a U.S. administration out to score a victory and a Democrat-led House that is unlikely to cede any easy wins.

The Uncertainty Goes On

The most probable outcome increasingly seems to be the agreement’s passage in the second half of 2019, with the risk that it gets pushed into early 2020. However, one thing is certain: Until USMCA passes through all three legislative bodies, North America’s countries can expect to live with continued uncertainty weighing on an already cautious economic outlook.

Jonathan Munemo Professor of Economics at Salisbury University
URL: https://www.brinknews.com/as-usmca-moves-toward-ratification-uncertainty-looms/
Get ahead in a rapidly changing world. Sign up for our daily newsletter. Subscribe
​​