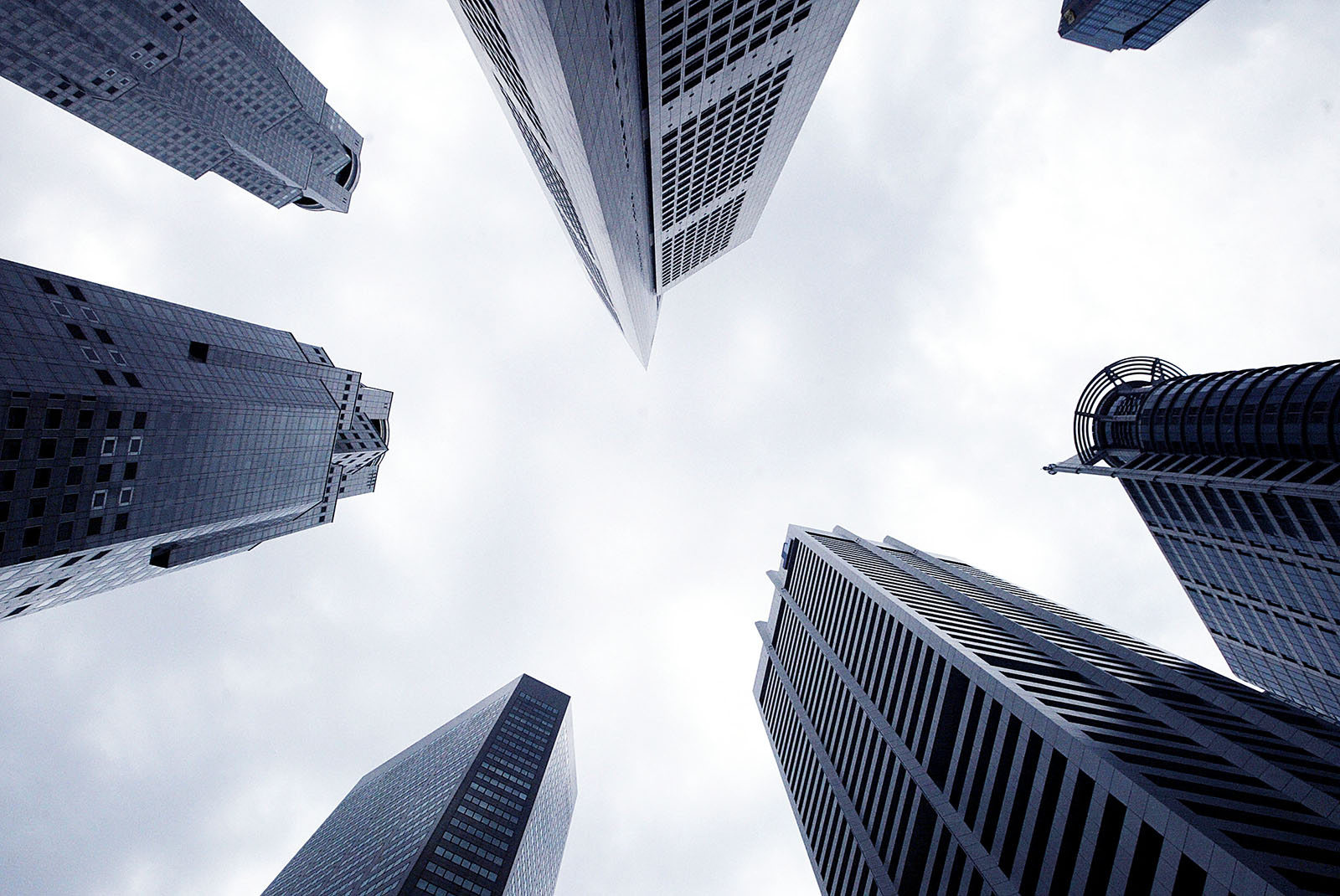 Highrise financial buildings in Singapore. Central bankers in emerging Asia need to acknowledge that climate change is a financial problem.

Climate change is already a reality. The deadly bushfires in Australia, ferocious flooding in Indonesia and extended droughts in Vietnam have led to the destruction of infrastructure, investments and livelihoods. Yet across Asia, acceptance of this reality has not yet changed consumer behaviors across the region.

After a temporary slowdown in the past five years, greenhouse gas emissions rose to a historical high of 33.1 billion tons in 2018. Globally, fossil fuel-related carbon emissions rose by 1.7% from the previous year. There is a sustained increase in coal, oil and gas consumption in China, India and ASEAN, pointing to a seeming neglect of climate change concerns as Asia chases faster economic growth.

The Role of Central Banks

However, a new survey among 18 central banks from Asia shows that climate risks and low-carbon financing is a topic of increasing importance and relevance to the central banks and monetary authorities in the region, where many countries are experiencing hard impacts.

A clear majority of central banks — 16 out of 18 or 89% — agree that climate risk has become an important area of focus, particularly after the ratification of the Paris Agreement.

A third of the responding institutions have already issued policy statements on climate change and green finance. Three central banks stated that they have already issued guidelines or regulations on climate financing. Another two central banks referred to policy speeches in which their respective governors emphasized that both the physical impact of climate change and the transition to a low-carbon economy are likely to have first-order economic effects in the country and that climate risks are key challenges for the banking sector.

Almost all central banks (94%) think that they should play a role to help encourage low-carbon financing initiatives through activities such as green bonds.

The vast majority of central banks in the region believe that increased regional cooperation and policy coordination in the financial sector will promote low-carbon investment. Such cooperation channels include but are not limited to regional finance warranty programs, a regional fund for financing low-carbon projects and a regional carbon tax, as well as integrating green bond markets.

How Can Central Banks Help?

Policymakers and investors in Asia now face the challenging task of ensuring a structural shift to a low-carbon economy, while concurrently safeguarding economic prosperity and the stability of the financial system. Achieving this goal will require financial markets and institutions to start considering climate-related risks in their financing decisions.

Central bank governors and monetary authorities in the region can contribute to this process in several ways.

First, they can support measures to improve financial markets’ ability to consider climate-related risks, e.g., better disclosure of such risks.

Second, central banks and financial regulators should further deepen their activities in assessing the climate-related financial risk exposures of their regulated firms, including what data and methods they are using in assessing these risks, and take appropriate actions if prudential risks are found to be material.

Finally, central banks might wish to consider whether they should account for climate-related factors in determining eligibility of assets for asset purchase programs or as collateral in market operations.

Before the coronavirus outbreak, the ASEAN region, a group of 10 countries in Southeast Asia, was predicted to grow 5.7% this year. The main sectors that drive economic growth in these economies — like manufacturing, machinery and chemical and allied industries — are energy-intensive sectors, which result in increased emissions.

To combat this, each ASEAN country has its own national commitments to reduce its respective carbon footprint and rebalance the energy mix that is currently dominated by fossil fuels. Additionally, ASEAN member states are working toward realizing a common regional goal of intensifying renewable energy in the region’s primary energy mix to 23% by 2025.

In Indonesia, Malaysia, the Philippines, Thailand and Vietnam, emissions rose by 4.8%, although the per-capita release remained low, only 40% of the global average.

Indonesia recorded a 4% rise in energy demand led by coal power generation and oil for transport, the two biggest contributors to climate change.

There is good news, which has the potential to turn around the energy-use trajectory that currently jeopardizes our future.

In recent years, natural gas has been replacing coal for power generation, which has resulted in roughly 24% growth in the world’s use of natural gas. Second, renewable energy — solar, wind, hydroelectricity and bioenergy or biofuel — are quickly becoming part of the energy balance sheets at national level.

Unfortunately, the growing demand for energy is likely to outpace decarbonization efforts, even if that includes clean energy supply and energy-efficiency improvements.

By 2050, it is estimated that climate change could reduce annual GDP in some countries in South and Southeast Asia up to 5%, with the worst catastrophes yet to come.

Yet, in the recently concluded elections in India, Indonesia and Thailand, the issue of climate change and sustainability barely featured in the campaigns. It is becoming crystal clear that Asia is, so far, failing in its duty to steer a course consistent with the climate goals set out in the Paris Agreement in 2015.

Low-carbon, resilient infrastructure financing needs for ASEAN members is estimated at around $210 billion per year, when considering climate change mitigation and adaptation costs. Public budgets alone will not be able to bridge this need, hence the urgency to catalyze private capital sources.

We need a new economic framework and growth model that integrates climate and disaster risks in all aspects of finance, planning and budgeting. Second, we need effective economic policy and fiscal instruments. We need to put a meaningful price on carbon and end fossil fuel subsidies, which today amount to $373 billion a year.

According to a study from the Economic Research Institute for ASEAN and East Asia, carbon pricing and ending subsidies across the region could generate nearly $3 trillion in government revenues or savings by 2030.

From Millions to Trillions

We need to turn investments in climate action from millions to trillions. The private capital is there, but policies to liberate it are weak or nonexistent. Governments and central banks need to engage their commercial banks to support green financing and innovative financial instruments — such as green bonds and debt instruments — that can strengthen the resilience of vulnerable communities.

Asian economies are the most dynamic globally. However, they are also among the most vulnerable to natural hazards such as storms, floods, droughts, tsunamis, earthquakes and the impacts of climate change such as sea-level rise, coastal erosion and extreme temperatures.

Central Bankers in emerging Asia, should acknowledge that climate change is a financial problem.

Treating climate change as a systemic risk would allow Asia’s central banks to apply the climate risk stress tests and standards to their own bond purchases, as is being done increasingly in Europe.

The European Central Bank’s (ECB) corporate bond purchase programs have decided to avoid all brown or climate-unfriendly assets. This will gradually shift investments from fossil fuel to renewables. The second, more radical, option is green Quantitative Easing (QE), as is being done by the German Central Bank. This would mean buying corporate bonds directly from renewable energy companies and would go beyond penalizing brown assets for their climate associated risks by effectively subsidizing green assets.

Asian banks should join the Network for Greening the Financial System (NGFS), a global network of central banks and supervisory authorities advocating a more sustainable financial system. All the countries in the region have ratified the 2016 Paris Accord. Asia’s central bankers who oversee this world of uncertainty cannot stick their heads in the sand; their policies and actions must be climate-conscious.