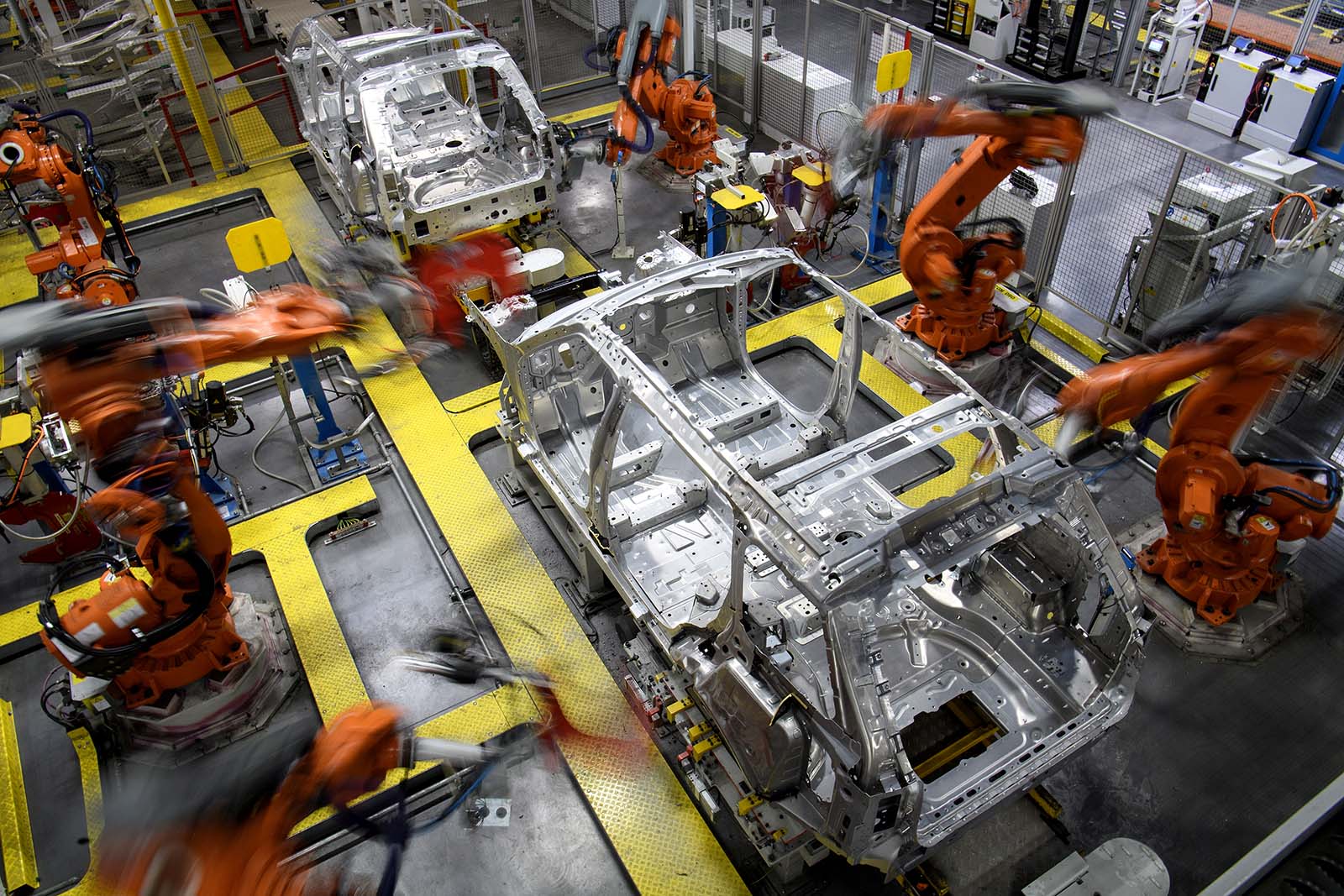 Robotic systems work on the chassis of a car during an automated stage of production at the Jaguar Land Rover factory in Solihull, England.

The forward march of technology last year continued to challenge the way organizations think about innovation and adapt to change.

Questions about finance, currency and the future of work loomed large across sectors as organizations weighed the risks and benefits of InsurTech, blockchain and automation.

These questions and more were woven throughout the top technology stories that captured the attention of BRINK readers in 2017.

InsurTech: Hype or the Next Frontier?

InsurTech—the blending of insurance with digital technology—has been attracting a great deal of interest from founders, investors and incumbents. As a result, investment in InsurTech firms has skyrocketed. According to data from CBInsights, total deal activity has increased sevenfold over the past decade, averaging $1.7 billion a year from 2014 to 2016, compared to $250 million a year, from 2011 to 2013.

Dietmar Kottmann, a partner in the Digital Insurance Strategy practice at Oliver Wyman, and Nikolai Dördrechter, a managing director of Policen Direkt-Group, explore the factors at play in this piece outlining InsurTech trends. The two developed a model to analyze the crowded InsurTech field, identifying 19 types of InsurTech business models within three industry value chain segments and compiling a database of more than a thousand InsurTechs and other relevant players. Their conclusion: The InsurTech race will no doubt keep heating up from here.

Blockchain is traditionally known as the underlying foundation for the cryptocurrency Bitcoin. But its ability to create “mutual distributed ledgers,” which are self-governing, tamper-free, online databases that no one owns but that everyone has access to and can trust, has begun to make inroads to mainstream commerce.

The forward march of technology last year continued to challenge the way organizations think about innovation and adapt to change.

Now, the technology promises to revolutionize container logistics and marine shipping by connecting the supply chain in a way the industry has never seen before, eliminating costly, time-consuming processes and creating trust and partnership in an industry where such principles can, at times, be misunderstood by providing the “single version of the truth” to all parties involved.

Stepping Up to the Challenges of the Fourth Industrial Revolution

The Fourth Industrial Revolution—the ongoing digital revolution—is upon us. One of the key questions, however, is how we can exploit the opportunities it provides while mitigating its potentially substantial risks.

We are at the beginning of a revolution that is fundamentally changing the way we live, work, and relate to one another, writes Klaus Schwab, the founder and executive chair of the World Economic Forum. Mr. Schwab highlights the staggering confluence of emerging technology breakthroughs, covering wide-ranging fields such as artificial intelligence, robotics, the Internet of Things, autonomous vehicles, 3-D printing, nanotechnology, biotechnology, materials science, energy storage and quantum computing, to name a few. Many of these innovations are in their infancy, but they are already reaching an inflection point in their development as they build on and amplify each other in a fusion of technologies across the physical, digital and biological worlds, Mr. Schwab writes.

Construction Machines in the Digital Age

At first glance, giant earth-moving excavators and bulldozers would not appear to have much in common with the microchip-based worlds of drones and multidimensional imaging. But in the digital age, the heavy-duty tools of the construction industry and groundbreaking new tech will all be connected, write Romed Kelp and David Kaufmann, both partners at Oliver Wyman.

The first wave of digitization is already arriving in construction machines, which are becoming increasingly automated and connected, enabling operators to deploy them more efficiently, write Mr. Kelp and Mr. Kaufmann. Equipment manufacturers’ success will be determined by how effectively they apply digitized machines in this connected ecosystem.

Customer service centers have been typically regarded as a necessary evil, where customers have encountered their fair share of unhelpful calls. However, despite efforts to change this behavior, the phone is still the most widely used customer-service channel, with 73 percent of consumers phoning in for live interactions.

Call center interactions influence brand perception and loyalty, writes Josh Feast, founder and CEO of Cogito. They serve as a critical moment of truth in a customer relationship with a lasting impact on the decision to purchase or abandon ship.

Particularly, AI can be used to understand and improve phone calls during these crucial interactions, which can result in enhanced customer loyalty, increased employee engagement and improved operational effectiveness, the piece notes.

Ashlin Perumall Partner at Baker McKenzie, Johannesburg
URL: https://www.brinknews.com/brinks-top-5-technology-stories-of-2017/
Get ahead in a rapidly changing world. Sign up for our daily newsletter. Subscribe
​​