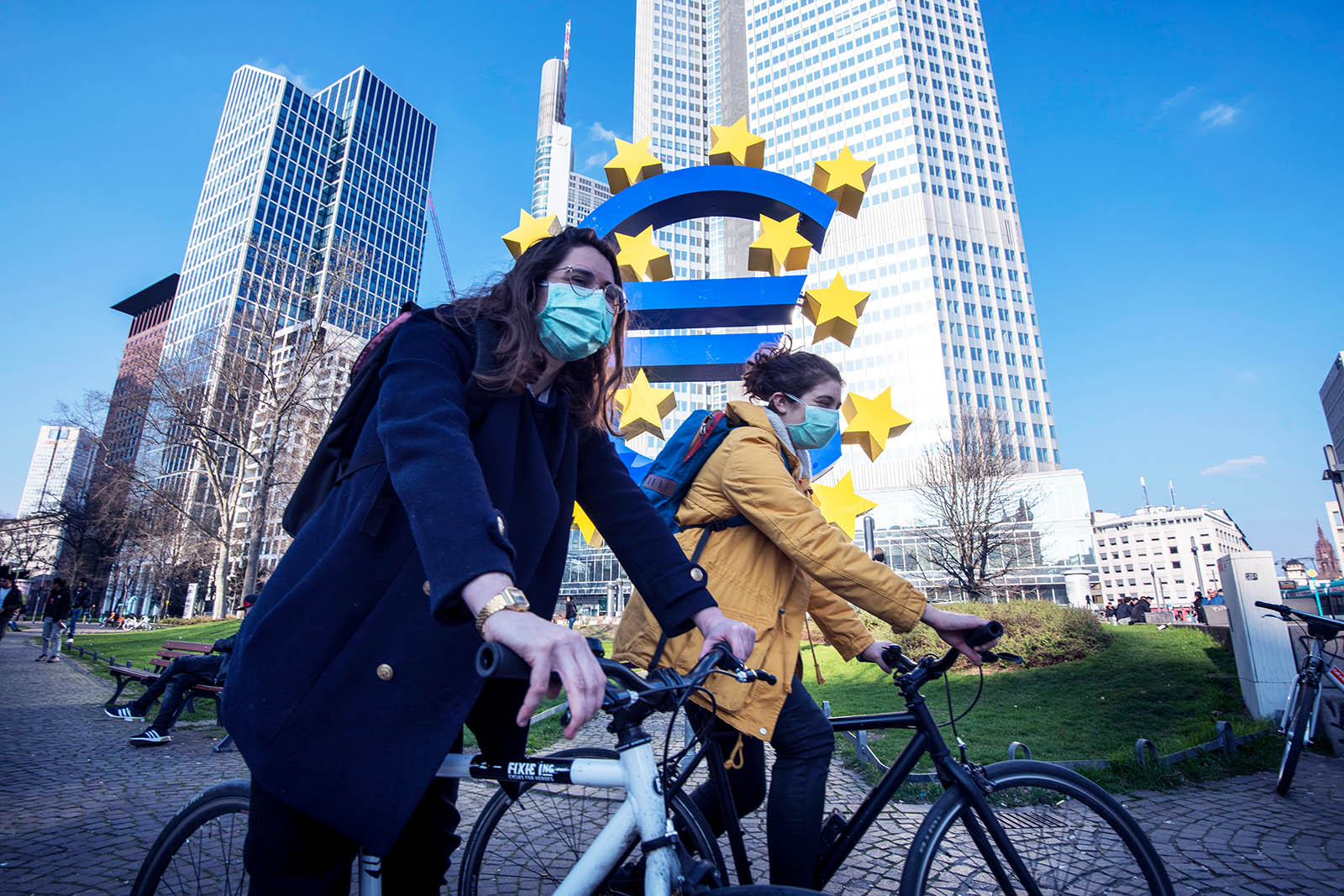 Two students wear face mask while they pass the Euro sculpture with bicycles in the finance district in Frankfurt, Germany. The central question is about the role of EU fiscal authorities in responding to coronavirus.

Ahead of the recent EU summit, nine EU leaders, including France’s President Emmanuel Macron, urged European colleagues to forge a common response to the economic challenge posed by COVID in Europe. Their letter to the president of the European Council calls for the creation of a common debt instrument “to raise funds on the market on the same basis and to the benefit of all member states, thus ensuring stable, long-term financing for the policies required to counter the damages caused by this pandemic.”

The letter underlines how much is at stake for Europe’s monetary union and highlights the deep disagreements that exist on a common approach to the political-economic fallout of the COVID-19 crisis.

The Role of EU Institutions

The central question is, once again, about the role of fiscal authorities in responding to the challenge.

The battle lines are quite familiar: On one side, national governments, on the other, most European institutions, namely the EU Commission, the European Parliament and the European Central Bank, which are trying to foster solidarity and burden-sharing.

The Stability and Growth Pact, with its rules about public deficits and debt, has been suspended and state aid rules relaxed. The commission and the European Investment Bank are mobilizing their firepower to help member states.

By announcing a cumulative COVID-19-related asset purchase program of 870 billion euros, the ECB under Christine Lagarde has stepped into the frame and contained the risk of a new financial crisis. It has signaled that it is determined to absorb a large proportion of the public debt that countries will be forced to issue to keep their economies from collapsing. The lines between fiscal and monetary policies have been further blurred.

Ultimately, the COVID-19 response will require massive public interventions by member states. Some EU countries can ill afford them, think of Italy, and when European nations emerge from the crisis, their fiscal positions will likely have diverged further. And at some point, suspended rules will have to be applied again.

Despite paying lip service to much needed solidarity, EU leaders are still entrenched in old battle lines, pitching North against South: traditionally fiscally conservative countries such as Germany and the Netherlands against nations such as Italy, Spain and France.

The result is a familiar deadlock.

COVID-19 could weaken Europe’s foundations or spur a leap toward a more perfect union, depending on which path European leaders choose in the next few months.

Can Europe Create a More Perfect Union From the Crisis?

The rift has no immediate impact on tackling the emergency, given what the ECB is doing. But it could carry a very heavy economic and political price tag if no compromise can be found soon.

COVID-19 could weaken Europe’s foundations, perhaps irreversibly, or spur what some are calling a Hamiltonian leap toward a more perfect union, depending on which path European leaders choose in the next few months.

Political leaders are looking at various alternatives to address the fiscal challenge. One entails a common EU bond, issued to cover all coronavirus-related costs. The other centers on the potential involvement of the so-called bailout fund, the European Stability Mechanism (ESM), and its currently untapped war chest of around 440 billion euros.

There is a subplot about potential ESM involvement, however, as it carries a stigma. Its firepower is usually only deployed to help individual countries that lose market access and request assistance, and then it is only granted with conditionality.

On the other hand, the advantage of an ESM program is that it can trigger unlimited support from the ECB through a program called OMT (Outright Monetary Transactions). OMT has never been used — and for good reason. It entails parliamentary involvement. The bailout-weary Bundestag would have to give its OK.

Since the ECB is already granting potentially unlimited support through its current asset purchase program, it is understandable that asking the ESM for a credit line is not a palatable solution for individual countries, at least for as long as the ECB continues to offer more, with no strings attached. But the ECB is only a temporary solution, and central banks can only do so much.

The issuers of the joint letter support the idea of common bonds, arguing that the crisis requires a strong, joint response. The so-called frugal states, led by Germany, the Netherlands and Austria, prefer a more cautious approach and favor the targeted involvement of the ESM for countries needing extra support. At first sight, the two alternatives seem mutually exclusive. They are not.

What we haven’t heard much about is a third way, one that includes features of a common bond and involvement by the ESM.

The ESM could absorb a proportion of debt issued by euro-area member states, all coronavirus-related issuance, for instance, and replace it with its own bonds. COVID-19-related national public debt would be transferred to the ESM and mutualized. At the same time, the euro area would finally obtain its own safe common asset.

The only strings attached to the activation of the ESM would be to make sure that the debt issued is linked to the coronavirus response. While such an approach would blend calls for unspecified coronavirus bonds and ESM involvement, the responsibility to craft stimulus plans would largely remain in the hands of national governments.

The EU commission would be playing a much needed, supporting, coordinating role, and would make sure, for instance, that the recovery accelerates the transformation of the EU economy to make it greener and more digital.

For now, EU member states remain suspicious of each other, their reaction function eerily similar to the EU response to the financial crisis more than 10 years ago. Only this time, nobody can be seriously accused of being the guilty party.

Benjamin Keys Professor of Real Estate and Finance at The Wharton School
URL: https://www.brinknews.com/can-the-eu-financial-system-handle-the-strain-of-coronavirus-recession-economic/
Get ahead in a rapidly changing world. Sign up for our daily newsletter. Subscribe
​​