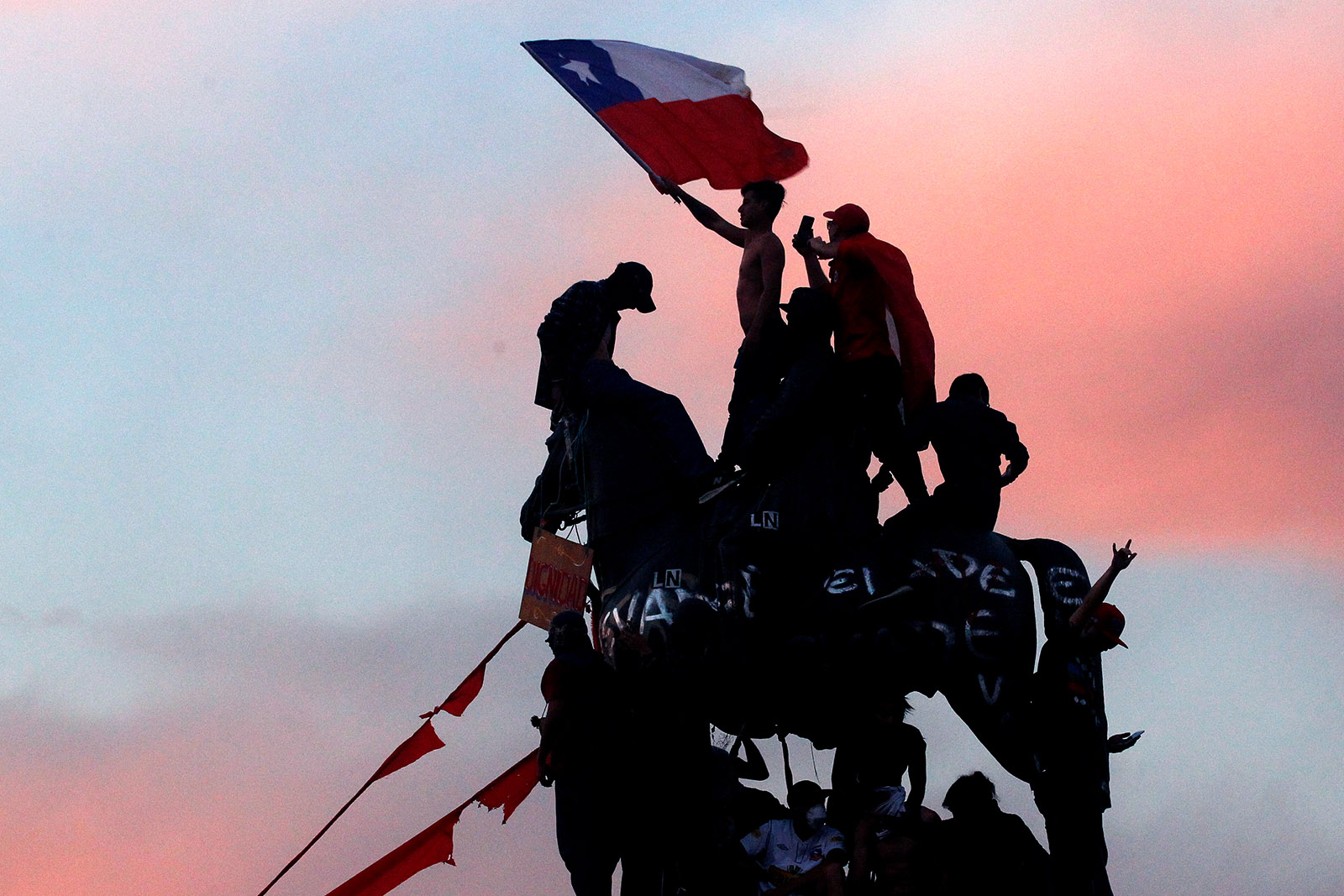 Protesters wave a Chilean flag during the eighth day of protests against President Sebastian Piñera's government in Santiago, Chile.

Chileans are in a foul mood. Last October, they took to the streets to demand better pensions, improved public services, quality education and wider access to health care. Over the past decade, slowing growth, a soaring cost of living and socioeconomic immobility have become widespread. Yet, this moment of national pessimism is occurring in the country that has enjoyed a reputation as Latin America’s capitalist success story for the past thirty years.

With protests still simmering, conservative President Sebastián Piñera has put Chile on track for a divisive constitutional reform process slated to conclude by the end of 2021. Fears of completely overhauling the nation’s basic commitment to laissez-faire principles are overblown. But an extended period of uncertainty means that the damage to its reputation could be long-lasting.

Blow to the Economy

If Chile’s economy was already sputtering, the economic impact from the country’s protests is considerable. The Chilean peso has fluctuated since demonstrations began, becoming one of the worst-performing emerging market currencies since the start of the year. Up to 300,000 Chilean jobs are at risk, according to analysts. The Central Bank of Chile cut growth projections for 2020 to a range of 0.5% to 1.5% from 2.75% to 3.75% previously.

The government of President Sebastián Piñera has offered a $5.5 billion stimulus package to rebuild public infrastructure, speed up pension payments and support small and medium-sized businesses. The recovery plan followed additional increases to social benefits, including a boost to pensions and the minimum wage.

But the costs of meeting all these social demands are rising. Public spending will increase by at least 10% this year, leading Chile to hit its highest budget deficit of the last 30 years. Chile’s borrowing is now expected to reach nearly 40% of GDP within five years. In addition to economic woes stemming from protests, the Chilean economy’s dependence on copper exports has proved painful amid trade wars and China’s slowing growth.

Nevertheless, the fact that Chile’s economy is growing instead of contracting following mass upheaval is a positive indicator. Indeed, Chile continues to enjoy a credit rating of A+/AA- with a stable outlook, according to Standard & Poor’s — the highest in Latin America.

The Chilean protests have proven that political dynamics can shift in an instant — even in Latin America’s most functioning democracy and economically developed country.

The risk in Chile has turned more political than economic. On April 26, a referendum will be held to determine whether the country will rewrite its constitution. This is a foregone conclusion as the vast majority of Chileans support the idea. The process will culminate with approval of the final text in a second plebiscite, giving Chile a new constitution by the end of 2021.

Chile is not the first country in Latin America to consider changing its constitution in the last few decades with positive economic benefit — for example, Colombia had a constitutional convention in 1991. Chile’s constitution has been rewritten several times, although this is the first time since the end of Chile’s military dictatorship that a completely new document could be written.

A New Constitution Could Be a Good Thing

Chile’s wealthier business and financial elites are nervous that rewriting the constitution at this time of national gloom could result in a Venezuela-inspired document that turns Chile’s democracy into a statist, Chavism-style model. The fears, in part, stem from the fact that a second vote, timed to coincide with municipal and regional elections, will determine who would write the new constitution and how. The timing of the vote could politicize the constitutional process.

But despite the concerns, the chances are high that Chile will maintain a competitive market economy with new, stronger elements of a European-style welfare state. A two-thirds majority will be required for new laws, and most Chileans do not want to fundamentally overturn the country’s economic model.

The pillars of Chile’s economic success — an open economy, respect for private property, central bank independence sound macroeconomic policy — are unlikely to disappear. A final constitution would be ratified in a third vote in early 2022.

While a new constitution is unlikely to radically deviate from the Chile we know today, it’s the slow pace of the process that prolongs economic uncertainty and political instability. Members of the constituent assembly will not be elected until October and will then deliberate for up to a year before a referendum takes place.

In the meantime, it comes as no surprise that much-needed domestic and foreign investment in Chile might well be shelved. The situation is made more difficult by an unpopular central government. President Piñera, who remains in office until 2022, is polling at single-digit support.

While Chile’s leftist parties dislike the center-right leader, conservative factions believe he has already given away too many concessions. Meanwhile, the government faces accusations of human rights violations and police repression from international bodies like the Inter-American Commission on Human Rights and NGOs like Human Rights Watch.

As the constitutional process meanders slowly forward, demonstrations could, once again, intensify if economic activity and employment suffer dramatically. But a new constitution that levels the social playing field while defending the free market would have a positive long-term impact.

Going forward, Chile’s reputation as a country immune from the region’s social turbulence has clearly suffered a hit. The recent protests have proven that political dynamics can shift in an instant — even in Latin America’s most functioning democracy and economically developed country.

Russell Jones Partner in Oliver Wyman’s Banking Practice
URL: https://www.brinknews.com/chiles-economy-holding-on-despite-recent-upheaval/
Get ahead in a rapidly changing world. Sign up for our daily newsletter. Subscribe
​​