China, Europe and the Belt and Road Initiative 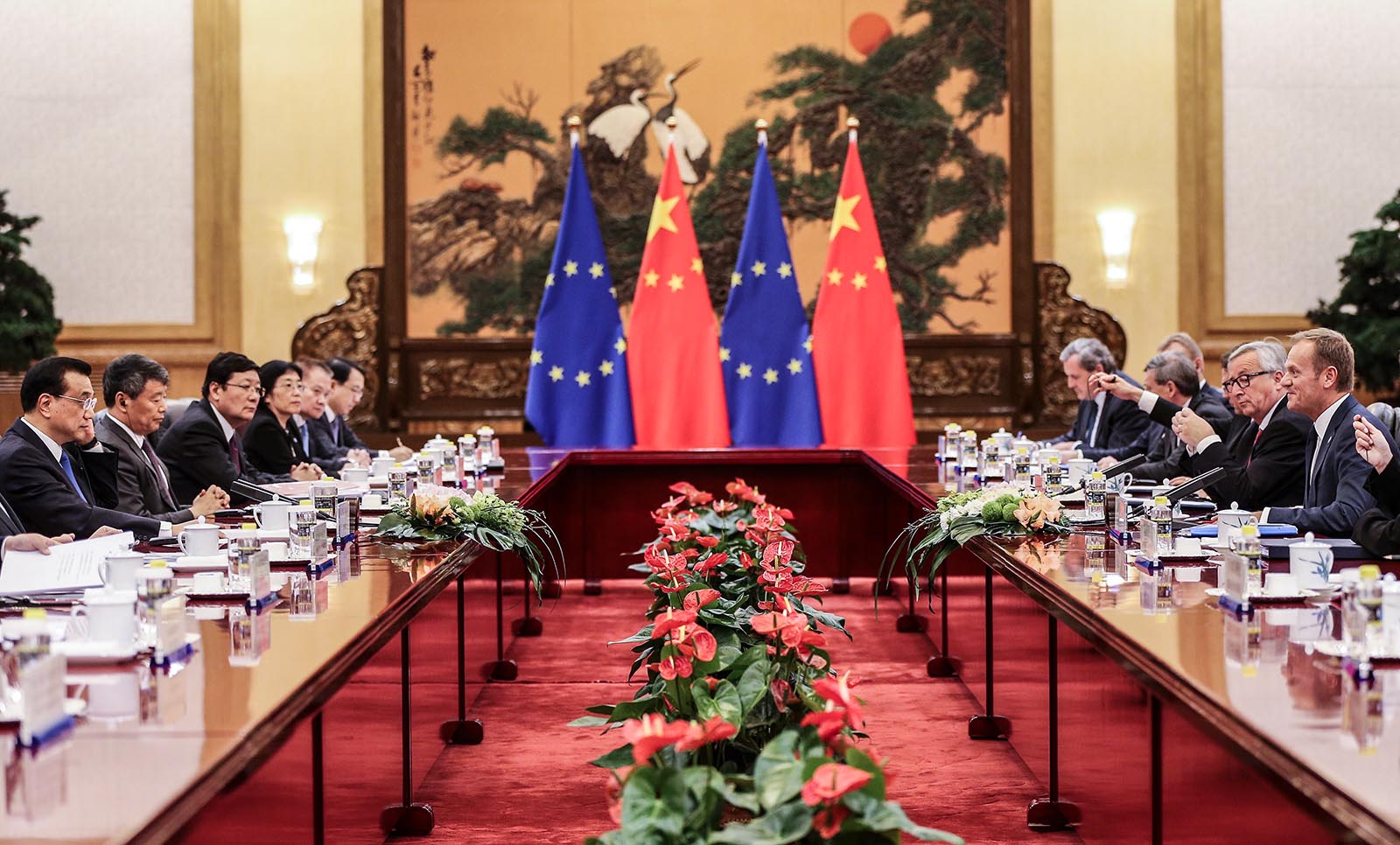 EU and Chinese representatives meet during the EU-China Summit plenary session at the Great Hall of the People in Beijing in July of 2016.

To any observer, the phenomenal rise of China in its evolution from a recipient of aid in the 1980s to its current position as a global economic and military powerhouse, adept at the judicious use of soft power and increasingly “sharp power,” is obvious.

Perhaps this is no more evident as in the 2013 announcement by Chinese President Xi Jinping of the Belt and Road Initiative, designed to revive and reinvigorate land and maritime trade routes between China, Asia, Africa and Europe. As of late 2017, there were 68 countries that had accepted China’s invitation to join the BRI.

But where Europe is concerned, the BRI has received mixed reviews. While China has wanted a closer working relationship with the EU surrounding BRI projects, the bloc’s leadership has been standoffish, insisting that China’s plans to connect with Europe should fall in line with several principles, including market rules and international standards. The EU’s vote against China’s application for “market economy status” at the WTO hasn’t helped matters.

The superlatives concerning the benefits of BRI have been nearly as abundant as comparisons noting it as being emblematic of China’s rise and an alleged U.S decline. These comparisons have grown more fervent with the U.S. accused of ceding its pre-eminence in the Asia-Pacific to China by abandoning its involvement in the Trans-Pacific Partnership, which may have tempered Chinese dominance in the region.

For real success, BRI will need to win the confidence of the private sector and convince them that the political risk inherent in such a grandiose scheme is acceptable. But even risk will provide opportunity for security contractors in both the maritime and land-based projects that China will need to complete for BRI’s success.

Political risk may be a bit more difficult for China in its relationships with powerful regional states such as India. Some states are simply nervous about what a greater Chinese influence in their region would mean. While many desire the economic relationship with China, they do not want Chinese manipulation and pressure to obtain political influence, with reports of this conduct being made by German, U.S., Australian and New Zealand officials amongst others. However, BRI represents an almost irresistible attraction to many in Asia, Africa and the Central and Eastern European states.

China has set the groundwork for BRI in Europe with its 16 +1 strategy of engagement across Europe. The 16+1 is a Chinese initiative aimed at intensifying and expanding cooperation with 11 EU Member States and 5 Balkan countries (Albania, Bosnia and Herzegovina, Bulgaria, Croatia, the Czech Republic, Estonia, Hungary, Latvia, Lithuania, Macedonia, Montenegro, Poland, Romania, Serbia, Slovakia, Slovenia) in the fields of investments, transport, finance, science, education, and culture.

The fear of risk remains with a fear of the Chinese driving a politically motivated competition for Belt and Road Initiative finance.

China Rising on the Back of the BRI

Even if only a portion of the superlatives concerning BRI are realized, then it is feasible that China’s position and influence regionally and globally will be on par with, if not surpass, the U.S. as the preeminent world hegemon. BRI may possibly allow many states to experience a phenomenal improvement in their economies. Apart from Asia, Africa and the U.S., there are the interests of the EU in BRI’s ultimate goal of re-establishing a new silk road into European economies.

The fear of risk remains with a fear of the Chinese driving a politically motivated competition for BRI finance. Some European analysts, such as Malgorzata Jakimow, argue that the Chinese have fueled these fears in the recent past by allegedly punishing Lithuania and Latvia for hosting the Dalai Lama and investing in a loyal Latvia, with other examples being reported.

These instances, as well as the ability of China to provide finance without the incumbent checks and balances that the EU insists on, make China’s money a viable alternative in an era of rising populism and nationalism in CEE states, which reject the EU at the visceral level.

BRI: Lever or a Wedge?

Hungary in particular among the CEE states and under the leadership of Prime Minister Viktor Orban has embraced BRI. Hungary was the first EU state to join BRI, as well as initiate its own “Look East” strategy toward China instead of Western Europe. This policy, though, has not provided the immediate gains that Hungary had hoped for with the China-funded Budapest to Belgrade rail link proving cumbersome to progress.

Though China insists it is not competing with Europe, the propensity to develop bilateral ties with individual EU states (in particular the CEE states) that perceive themselves as underfunded and underappreciated by the old EU states makes limited “red tape” Chinese investment highly attractive. States such as Hungary—where its leader, Mr. Orban, promotes “illiberality”—will not disturb the Chinese on issues the EU would raise with China on human rights issues or other similar issues.

Orban’s Hungary and a number of other CEE states will not disrupt the Chinese narrative that promotes BRI as not only advantageous but also as a benign and altruistic Chinese initiative. It is this capacity of BRI to initiate fractures and wedges in the EU, bypassing EU member states’ obligations and providing attractive economic incentives through bilateral relationships, that has Western Europe concerned. These relationships—amplified by the impact of populist and nationalist movements evident in Hungary, as well as the backlash against the EU, most recently seen in the exit of the UK from the EU—could be a catalyst in further dissolving the will of many CEE states to remain in the EU.

An effective and profitable engagement with China on BRI can only be maintained if states forthrightly disabuse China of the value of any attempt to unsettle established relationships such as the EU or the use by China of its so-called sharp power to secure favorable trade and strategic outcomes.

Tom Friedman Author, Reporter and Columnist for The New York Times
URL: https://www.brinknews.com/china-europe-and-the-belt-and-road-initiative/
Get ahead in a rapidly changing world. Sign up for our daily newsletter. Subscribe
​​