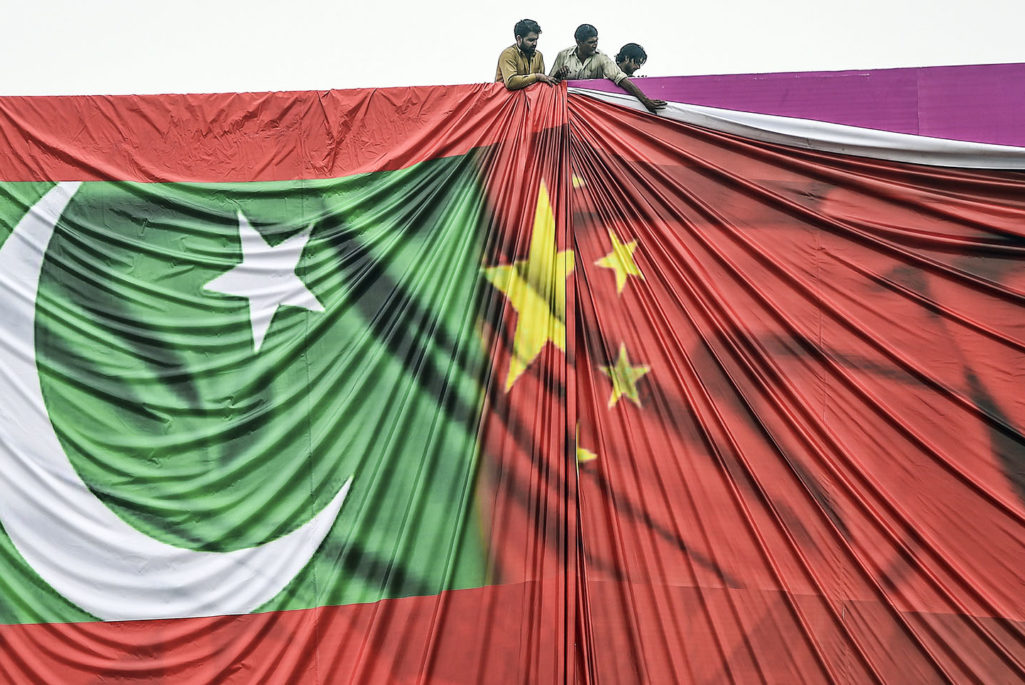 Pakistani labourers arrange a welcome billboard featuring the Chinese and Pakistani national flags ahead of the forthcoming visit by Chinese President Xi Jinping in Islamabad on April 18, 2015.

President Xi Jinping of China wrapped up his visit to Pakistan by signing several agreements, notably the sale of eight Chinese-built submarines to the Pakistan Navy, investment in power generation plants and further investment in Pakistan’s road and port networks. It is estimated that a full 80 percent of the $46 billion promised—between $35 and $37 billion—will be used to address Pakistan’s desperate need for electricity. These projects will, apart from alleviating industry’s need for power, take some of the pressure off Pakistan Prime Minister Nawaz Sharif, whose electoral promises included developing power projects to enable Pakistan’s industrial sector to work to its full potential.

As welcome as China’s loans may be to Pakistan, it is likely that India will not be pleased to note that Beijing has offered Islamabad the opportunity to purchase eight Chinese-built submarines and, reportedly, 110 J-17 fighter aircraft with the first 50 to be delivered over three years. Specific details, such as the type of submarines, delivery dates and their customization, if any, were not made available. It would take no stretch of the imagination, however, to foresee the strategists in New Delhi beginning to factor these assets into their calculations of their own deterrence strategies.

While on the face of it, the aid provided to build Pakistan’s energy infrastructure will be more than welcome in Islamabad, it does not look quite as appealing under closer examination. First, the aid provided will be used by Chinese construction firms using Chinese labor for the most part to construct the power plants for Chinese energy companies to own, operate and manage. The power generated will be sold to Pakistan. In essence, Beijing has perfected the diplomatic art of camouflaging the creation of business and employment opportunities in the cloak of developmental aid. There is little doubt that some Pakistani labor will be used to construct the power plants; however, if China’s African model is a precedent, the employment opportunities available to Pakistanis will be of the menial kind. It is surprising that Islamabad did not recognize this to be a variation of the strategy the United Arab Emirates and Saudi Arabia used to acquire Pakistani farmland in order to ensure their food security at Pakistan’s expense.

A major component of Beijing’s revamp of Pakistan’s energy sector is the construction of a gas pipeline from Iran, through Pakistan’s restive Balochistan Province, on to China. In fact, the overall energy projects are aimed at creating a Pakistan-China Economic Corridor extending from Pakistan’s southern port of Gwadar on the Arabian Sea to Xinjiang province in China’s west. This corridor will have major benefits for China. It will, in the first instance, reduce the risk to its energy security that China faces by having to ship its energy products from the Middle East through the Strait of Malacca. This corridor will enable Beijing to bypass the strait—a choke point that could possibly be controlled by a rapidly developing Indian Navy. It will also, if it is extended to include Iran, as was remarked upon previously, extend Beijing’s influence into the Middle East and bring Pakistan even more under its influence.

As welcome as China’s loans may be to Pakistan, it is likely that India will not be pleased.

The corridor will also enable Xi to not have to worry as much about an American naval presence that could potentially threaten China’s energy imports in the Western Pacific and a Russian zone of influence in Central Asia. It will, additionally, demand that India recognize Pakistan as a renewed power rather than being a failed state. The sale of the fighter aircraft and submarines to Islamabad can only add to India’s concerns that Pakistan is once again a relatively powerful Chinese proxy that can hold India’s attention.

It is not only India, however, that has cause for concern; Pakistani strategists ought to be equally concerned. There are already signs from the poorer provinces, notably Balochistan, that there is a large degree of anger over the agreement. Baloch politicians have already claimed that the pipeline’s route was changed so as to bypass the major cities of the region and benefit those of the richer provinces like the Punjab, which dominate Pakistani politics and the armed forces. Balochistan, Pakistan’s poorest and least populous province, has waged a separatist insurgency since 1947. Islamabad sent the army into Balochistan in 2005 to quell the insurgency, which only further aggravated the situation. It is telling that Baloch insurgents, allegedly, targeted and killed Chinese personnel in the province in 2006. China chooses not to interfere in the domestic affairs of other countries and, apart from pressuring Islamabad to react to the killings and providing it with some military hardware, did little else. If, however, Chinese personnel are now killed in larger numbers by insurgents or the Taliban, Beijing will be hard pressed not to take a more active stance. It will be interesting to see how far the Pakistani military will go towards quelling such violence without causing all out domestic strife, which can only distract from the economic progress it has to make.

Will the Indian Ocean Become the Next Nuclear Risk?

It is likely that China is supplying its S20 submarines, its most powerful conventional class, to Pakistan. It is just as likely that Pakistan, borrowing from the Israeli model of using conventionally-powered submarines to launch nuclear missiles, will re-configure the submarines to be able to launch its own nuclear missiles, thus giving it a second-strike capacity. This could be seen by New Delhi as yet another ploy by Beijing to contain it. When this is combined with recent statements emanating from Beijing about the troubled border issue between the two countries, New Delhi will even more convinced that this is the reason for Beijing’s “largesse” towards Islamabad and see it as the usual Chinese attempt to put visiting dignitaries on the back foot, in this case Prime Minister Narendra Modi’s visit to Beijing in May. In the longer term, New Delhi will need to counter these assets, which will see it ramp up its production of submarines and other naval assets. It has already started along this course of action. New Delhi will also perceive a requirement for more naval assets to counter what it sees as China’s increasing inroads into the Indian Ocean.

Beijing’s “gift” to Pakistan is brilliant strategy but will inevitably result in India taking steps to counter it. This is likely the beginning of the true nuclearization of the Indian Ocean.

Tom Friedman Author, Reporter and Columnist for The New York Times
URL: https://www.brinknews.com/chinas-aid-to-pakistan-increases-regions-geopolitical-risk/
Get ahead in a rapidly changing world. Sign up for our daily newsletter. Subscribe
​​