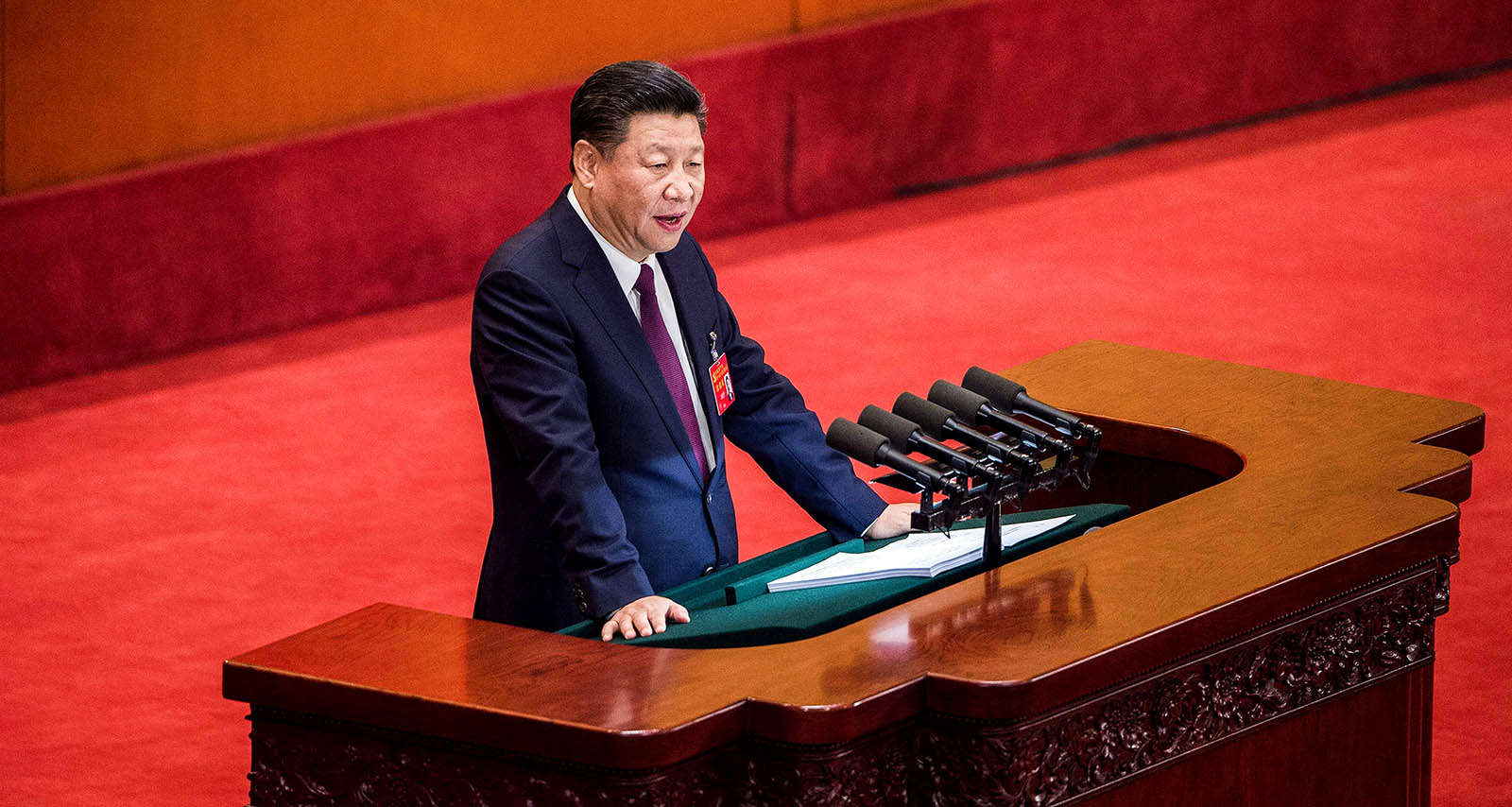 China's President Xi Jinping speaks at the opening session of the Chinese Communist Party's 19th Congress in the Great Hall of the People in Beijing on October 18. Mr. Xi declared China is entering a 'new era' of challenges and opportunities.

China’s President Xi Jinping now stands as one of the most influential leaders in the country’s history, coming out of a weeklong political summit held by the Chinese Communist Party last week, standing shoulder-to-shoulder with Mao Zedong.

The 19th National Congress, a twice-a-decade event, ended with an amendment to the party’s constitution that saw Mr. Xi’s name added to the document that included his signature policy intended as a framework to guide the party in years to come. Although other communist leaders have had their governing theories added to the constitution, only Mao and Deng Xiaoping had been elevated to that status before Mr. Xi. The addition of the phrase “Xi Jinping Thought on Socialism with Chinese Characteristics for a New Era”—a collection of Mr. Xi’s speeches, which is the equivalent of Mao’s Little Red Book—places an already powerful leader on par with Communist China’s founder.

The historic decision to enshrine Mr. Xi’s concept foreshadows his intention to remain in power beyond the end of a second term in 2022, clearly defining him as the most powerful Chinese leader since Mao, even surpassing Deng, who opened up the Chinese economy to the West in 1972. By doing so, Deng set economic forces in motion that have since seen China become the world’s second-largest economy and the leading trading nation.

Mr. Xi seeks to restore China to its position as the world’s superpower. Successive Chinese leaders since Mao have worked toward deconstructing the world order created by the West and giving China its rightful place—at the very apex of the international pecking order. With its huge foreign exchange holdings, Beijing, under Mr. Xi, has accelerated its “Going Out” policy. It is using those holdings to ramp up its influence globally in order to supplant the U.S. as the world’s economic and military superpower. The One Belt, One Road initiative is one outcome of this overarching objective. Mr. Xi has also pushed the idea of trade agreements with the six largest ASEAN economies and increased Chinese investment into those economies, replacing Washington as their largest source of foreign direct investment. FDI into Africa and Eurasia is also increasing.

Mr. Xi seeks to reposition China on the world stage as a legitimate superpower.

To ensure there are no domestic distractions or interruptions to his plans, Mr. Xi has taken steps to ensure that his loyal followers are placed in positions of power. Doing so accomplishes two functions: to remove potential dissent, thus leaving him free to focus on the task of replacing Washington globally, and to ensure that he has the option of becoming a ruler for life as Mao did, or at least remain in power for as long as he chooses.

On Wednesday, Mr. Xi named new members to the Politburo Standing Committee, the apex body. Premier Li Keqiang was the only member to retain his position on it. Li Zhanshu, Wang Yang, Wang Huning, Zhao Leji and Han Zheng, all Communist Party officials who are known for not voicing dissent, were also elected to the committee and replaced five retiring members, including Anti-corruption Chief Wang Qishan, a key ally to Mr. Xi. None of these new committee members will have anything approaching the power Mr. Xi now wields.

Mr. Wang Yang, who becomes executive vice-chairman, has strong administrative experience as manager of megacities Chongqing and Guangdong. In his previous role as a vice-premier he led the way on trade and economic affairs with the U.S. and has overseen the poverty-alleviation campaign of Mr. Xi. Deng’s maxim has long guided Chinese foreign policy: “Observe calmly, secure our position; cope with affairs calmly; hide our capacities and bide our time; be good at maintaining a low profile; and never claim leadership.” Mr. Xi, it would appear, has determined that China is now powerful enough to put that advice aside and take its rightful place in the international community.

Mr. Xi’s three-and-a-half-hour speech during the opening of the National Congress demonstrated his decision to put the caution of “Dengism” aside and take a more aggressive stance in his quest to make China the leading economy and superpower—and to replace the U.S. in doing so.

Mr. Xi began his speech with his report on the country’s economic progress noting the economy grew at a medium-high rate, making China a leader among the major economies, whose GDP “rose from 54 trillion yuan to 80 trillion yuan (about $12.1 trillion) over the past five years [and that] China maintained its position as the world’s second-largest economy and contributed more than 30 percent of global economic growth.”

Rather unusual for the setting, however, Mr. Xi noted that the economy faces many challenges, the era of double-digit growth was over and a slower growth rate of around 6.5 to 7 percent would be “the new normal.” Mr. Xi said that he still needed to increase China’s influence internationally and, simultaneously, reduce poverty levels domestically. To do so, he declared, he needed to liberalize the economy to encourage further foreign direct investment, but with enhanced control over which areas of the market were liberalized. This approach could explain why Mr. Xi has aggregated political power in himself.

With Mr. Xi’s economic report to the Congress completed, the abrasive stridency that has become a recent characteristic of Chinese foreign policy under Mr. Xi returned. Referring to the 1.2 million officials and party members who have been investigated for corruption since he came to power in 2012, Mr. Xi remarked that corruption remained the strongest threat to the CCP.

Corruption aside, Mr. Xi had grim words of warning for the freedom movements in Hong Kong and Taiwan. Referring first to Hong Kong, he stated that while the two-system model would continue, Hong Kong was part of China and subject to Chinese law. This was a direct message to the leaders of the so-called “Umbrella Movement,” who demanded greater autonomy for Hong Kong. He reserved his harshest warning, however, for the independence movement in Taiwan. The language was plain and blunt: Declare independence at your own peril.

It was, however, his remarks about keeping the loss-making state-owned enterprises functioning that caused eyebrows to rise among China watchers. “We will further reform SOEs, develop mixed-ownership economic entities, and turn Chinese enterprises into world-class, globally competitive firms,” Mr. Xi said, indicating that even failing state-owned enterprises would continue to be economically supported. For example, China’s state-owned steel-producing companies are notoriously inefficient. The CCP cannot afford to close them down, however, because that would put millions of workers out of work, which could lead to enhanced societal tensions. China’s solution until now has been to subsidize these state-owned companies and dump their products in other countries at greatly lowered prices. It was precisely this and China’s attendant practices that led U.S. Secretary of State Rex Tillerson to call the practice “predatory economics” and China a predatory rule breaker.

The 19th Congress in Beijing has enabled Mr. Xi to strengthen his grip on power, making him arguably the most powerful Chinese leader since Mao. It has also enabled him to use that power as a foil against a world order that was created by the West, its institutions and principles. By assuming that power, however, he must surely be aware of the attendant risk that accompanies it. Mr. Xi is playing a very calculated game, one that could have dire global consequences if either he or another world leader who is equally nationalistic in his outlook misreads a situation or set of events. The next five years will likely prove a watershed, one way or another.