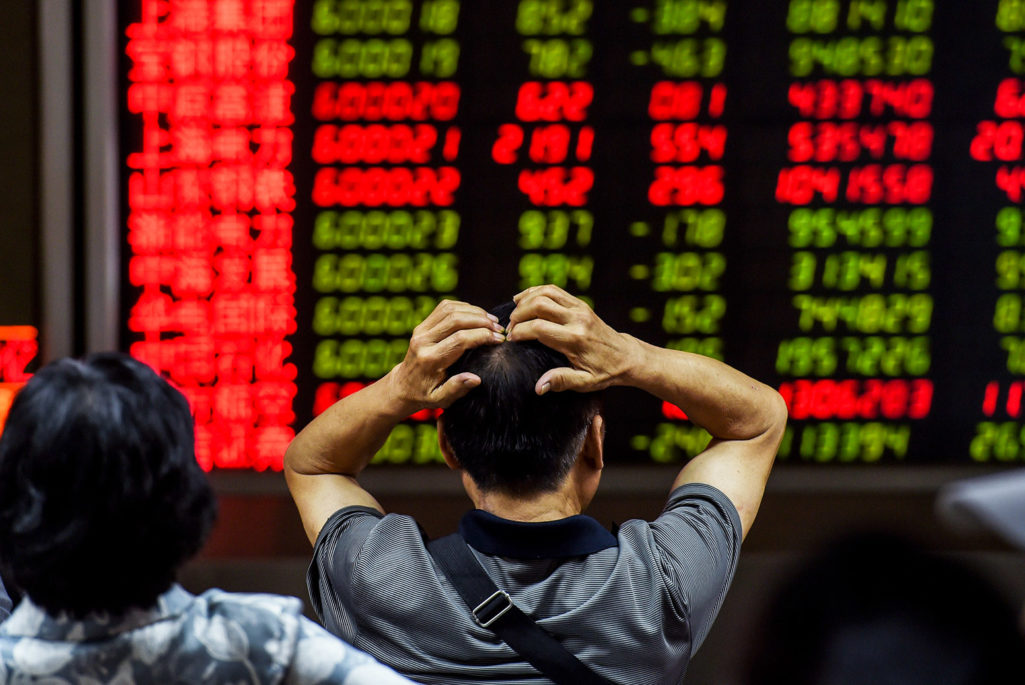 An investor looks at screens showing stock market movements at a securities company in Beijing on July 14, 2015. Authorities intervened after the Shanghai index plunged 30 percent in three weeks, wiping trillions of dollars from market capitalizations, spreading contagion in regional markets and raising fears over the potential impact to the real economy.

The recent collapse of China’s stock market is reverberating across its leaders’ carefully manipulated internal and external plans to exert global influence bolstered by dubious economic growth and flex its growing geopolitical muscle.

Some analysts have drawn comparisons to the Wall Street crash of 1929. This is not as exaggerated as it may appear at first glance. On June 12th, the Shanghai Composite Index (SSEC) closed at 5166.35 points, its highest since January 2008. The SSEC’s rise by 150 per cent over the year was mostly due to investors borrowing to buy shares, just as their American counterparts did in 1929. By July 3rd, however, the SSEC had lost 1481 points, 29 percent off its high, erasing some $3 trillion in share value. China’s NASDAQ equivalent, ChiNext, fell 4.3 percent.

In another 1929 parallel, indebted Chinese investors today need to sell their shares in order to pay off their debts but with one major difference—the Chinese Government won’t allow it. China’s economy is not entirely free; it is not commanded by market forces, but by the government which, panicking at the magnitude of the collapse, ordered brokers to buy shares, suspended the sale of shares and froze trading in 1301 companies, nearly half of all those listed, to prevent further falls in share prices. Consequently, the China Banking Regulatory Commission ordered banks to offer soft loans so investors could repurchase shares. By July 8th, the China Insurance Regulatory Commission had purchased more than $18 billion worth of stock.

These artificial measures prevent the stock markets from performing their basic function of supplying capital, which can only affect long-term economic growth negatively. Also, the government’s efforts to shift the economic emphasis from poorly-performing state-owned enterprises (SOE) to the relatively more efficient private sector lie in ruins. This will further impact economic growth negatively because the government will now continue to shore up the SOE. The market partially recovered because of these measures but analysts warn that the recovery will depend on how deep Beijing’s pockets are.

Arguably the greatest outcome is the impact upon President Xi Jinping’s carefully-crafted aura of invincibility.

Arguably the greatest outcome of all is the impact upon President Xi Jinping’s carefully-crafted aura of invincibility. Xi and Premier Li Keqiang, an economist himself, have made it publicly clear that they were responsible for the rapid growth of the stock market. They now need to dissociate themselves from the market slump and the blame that is bound to follow. And blame there will be. The loss of $3 trillion will be shared among ninety million Chinese investors, including 31 per cent of college students, and, unlike Greece, not between several European governments. Xi and Li will undoubtedly be aware that those ninety million investors outnumber the membership of the Chinese Communist Party and could pose a significant political threat if allowed.

Two Sets of Risk Emerge from the Economic Crisis

These and other issues could pose two sets of risk to the Xi Administration – internal and external. Social unrest is looming. The discontent of individual investors, the common man who lives with endemic corruption and the growing rift between the haves, who are generally perceived as being corrupt or favored by the authorities, and the have-nots could create a perfect storm that could threaten the legitimacy of the Chinese Communist Party (CCP). The primary objective of the CCP is its own survival. Its unwritten, tacit social contract with Chinese citizens runs along the lines of, “We will increase your standards of living and income. In return, do not question our legitimacy or right to rule.” With income falling, however, that social contract could be in danger of being re-examined by Chinese citizens.

In 2011 China spent approximately $111 billion on internal security agencies like the Ministry of Public Security (MPS), the primary organization responsible for domestic security. This was an increase of 11.5 percent over 2010 and surpassed the $98 billion it spent on the Peoples Liberation Army. In 2014, China surpassed the U.S. to become the world’s leader in purchases of surveillance equipment. In contrast, the U.S. spent around $600 billion on its military and $30 billion on the Department of Justice in the same year. China appears to have measures in place to subdue domestic uprisings, whether by college-going investors, who could copy the student demonstrators at Tiananmen Square in 1989, or others. It is probable that the Xi Administration will use all force required to ensure the continuing rule of the CCP.

Based on available figures obtained from the MPS, mass incidents of domestic unrest in China grew from 8,700 in 1993 to more than 120,000 in 2008, notably in the Xinjiang Region where Muslim Uighurs protest the curbs placed on their religious practices. The curbs were extended this year when the traditional fasting during the Ramadhan months was prohibited. More recently, the Chinese Academy of Governance stated that that number reached 180,000 in 2010. In 2012, the Chinese Academy of Social Sciences found ‘‘mass incidents’’ regularly exceed 100,000 per year. China seems to be preparing to fight a domestic war, one the stock market crash could trigger, to keep the CCP in power.

The Xi Administration has taken to blaming foreign forces for these problems. The game is as old as politics: create a bogey to distract a nation from their suffering. Chinese citizens are, however, growing increasingly sceptical of Beijing’s claims that “hostile foreign forces” are to blame for the stock market slump and China’s other problems. Activists in China’s labor unions, for instance, have blamed the failure of the All-China Federation of Trade Unions, and not foreign forces, to protect their interests. Nevertheless, the risk of mismanaging growing nationalism remains; the government has, for instance, begun to emphasise the need for more nationalism on the anniversary of the end of WW2 in Asia—pointing an accusing finger at Japan and emphasising the on-going territorial disputes with that country.

China also faces problems beyond its borders because of the market slump. Beijing has few if any true friends; it has used its foreign reserves to buy allies. On the other hand, its aggressive policies in the South China Sea, for example, have created a great deal of regional antipathy towards it. Reduced funds could put many of Xi’s legacy projects at risk and simultaneously encourage those states that see China as being increasingly belligerent to stand up to it. The Silk Road projects could be scaled back or postponed. Xi’s largesse towards the states of Kyrgyzstan and Tajikistan, through which a major part of China’s gas supplies flow from Turkmenistan, could be reduced with a consequent reduction in its influence there. This could leave Xinjiang more vulnerable to Islamic radicalism. Reduced funds could also place the recent China-Pakistan agreement at risk, leaving Islamabad feeling exposed to perceived Indian aggression. A nervous and nuclear-armed Pakistan does not bode well for nuclear-armed India. China’s influence could also be reduced in the Shanghai Co-operation Organisation, a fact that Vladimir Putin will welcome. Importantly, it is to be seen if the slump will affect China’s promised $25-to-30 billion contribution to the Asian Infrastructure Investment Bank.

The stock market slump has grave consequences for China domestically and abroad. This situation enhances the risk of its leaders taking actions that could have dangerous outcomes for its citizens and other states. The full story will be based on their actions in the weeks and months ahead.

Zack Cooper Senior Fellow at American Enterprise Institute
URL: https://www.brinknews.com/chinas-economic-woes-create-internal-external-geopolitical-risk/
Get ahead in a rapidly changing world. Sign up for our daily newsletter. Subscribe
​​