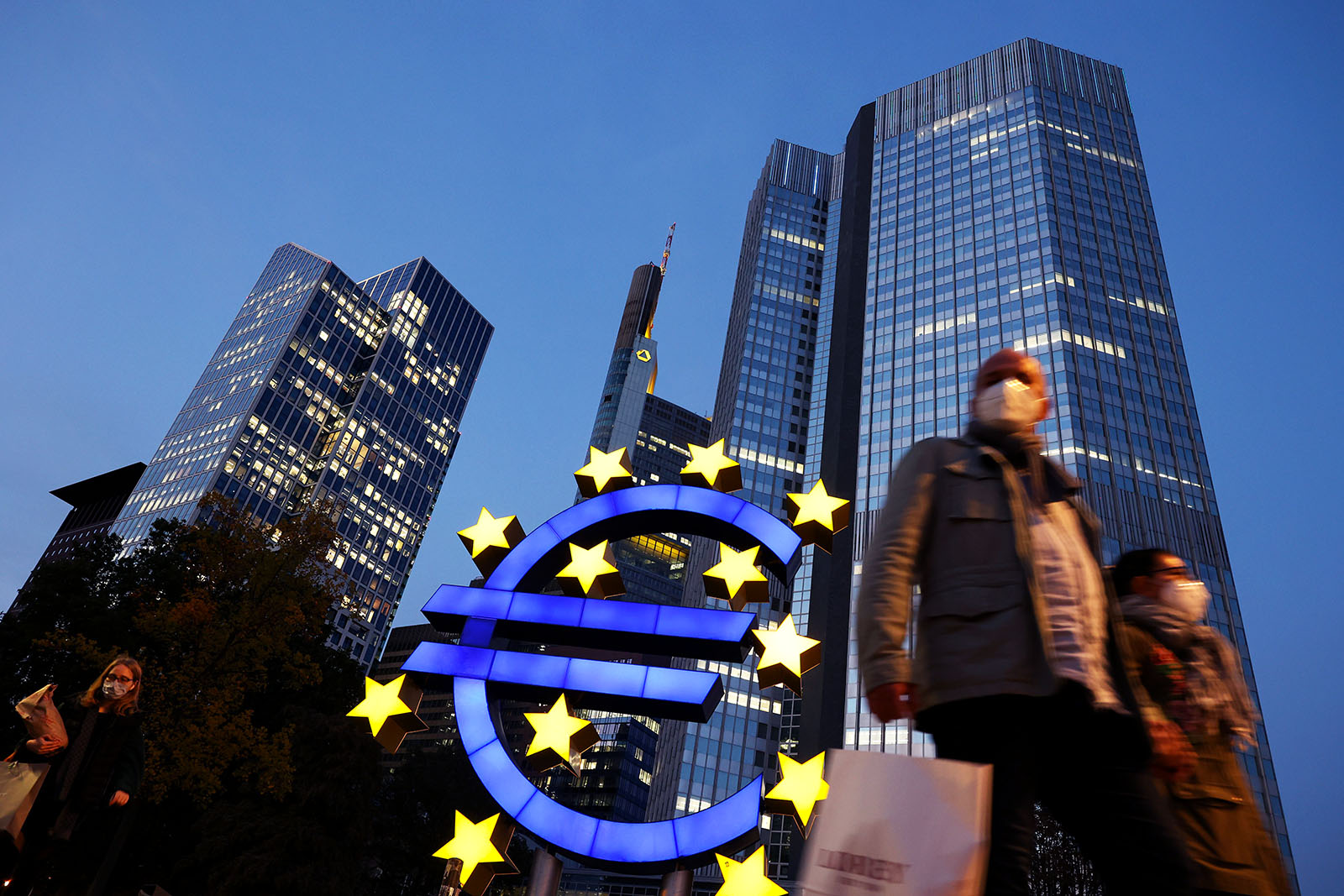 People wearing face masks walk in front of a euro sign and the former ECB headquarter in Frankfurt, Germany. Widespread concerns that loan books of banks will look much worse in 2021 and 2022 is spurring EU authorities into action.

Concerns about European banks’ ability to withstand the impact of the second wave of COVID-19 are increasing. In its latest lending survey, the European Central Bank observes that banks are tightening credit standards, primarily because the macroeconomic environment has deteriorated, and credit worthiness of borrowers is suffering as a consequence.

The financial stability review stresses that “profitability forecasts will be revised downward. … Ongoing weak profitability might hamper banks’ capacity to support lending to the real economy, not least as interest rates are expected to remain low.”

The Threat of Bad Loans

Widespread concerns that loan books of banks will look much worse in 2021 and 2022 is spurring EU authorities in Brussels into action. The EU commission is expected to present new proposals on dealing with nonperforming loans in mid-December. The European Parliament is currently examining a set of proposals from the EU commission and European governments on making it easier to bundle and securitize soured loans in order to disperse some of the risk among a wider group of investors.

Still, despite the darkening horizon, there is no sign of the febrile panic that gripped public authorities and banks in the wake of the great financial crisis, more than 10 years ago. There is also little sign of the virulent antagonism between politicians and the financial sector that made banks toxic in the political debate in the wake of the crisis at the time.

On the contrary, this time, the public sector and banks have worked together.

Both sides are conscious of the fact that they need each other in order to help the wider economy. A package of voluntary, supervisory and legislative measures introduced in the spring, including payment holidays and generous state guarantees for new loans, allowed banks to continue lending. And, thanks to the global post crisis framework, banks entered this emergency much better capitalized and, therefore, more robust than in the recent past.

The sector is still largely fragmented along national lines. Europe is still “overbanked.” The wave of necessary consolidation never occurred, at least not across borders. The banking union is still far from complete.

Banks entered the emergency with weak profitability and are seeing their profitability further eroded by the crisis. According to the ECB, return on equity, a key measure to determine how successful a bank is, has declined to 1.7%, on average, and will not fully recover for some time. In 2021 and 2022, the central bank estimates that ROE will merely increase to 3.1% and 5%, respectively, a far cry from what many CEOs had promised investors only a year ago. If some of them hoped that interest rates would eventually increase and allow their institutions to reap the benefits, they don’t expect that to happen anytime soon, anymore.

If European political leaders succeeded in creating the conditions for a truly, fully integrated European banking sector, banks would have been in an even stronger position going into today’s crisis.

Looking for Other Sources of Revenue

In other words, with interest rate margins compressed for the foreseeable future, banks need to rely on different sources of income. Can it be a different fee structure? That, too, could be difficult, as digitization is allowing big tech to increasingly engage in traditional banking activities, especially in payments. Costs should be expected to come down further in the near future.

However, these are underlying challenges that predate the health emergency. They are merely exacerbated by the impact of the pandemic. Of more immediate concern to authorities is what will happen to banks and lending once current support measures expire. Small- and medium-sized companies made generous use of state guaranteed loans that are set to expire by the year’s end, especially in countries such as Spain, France and Italy.

By June 2020, in France alone, banks reported 78 billion euros ($94 billion) of loans subject to state guarantees. In Spain, the figure was 73 billion euros. According to EBA, those loans have an average maturity between six months and five years. More than one-third expire in summer 2021. After that, loans will have to be repaid or refinanced.

But since they will not be backed by governments anymore, banks may become more reluctant to lend. What the ECB would like to avoid is that COVID-19 creates the conditions for a corporate/sovereign nexus in which stretched sovereigns and a weak corporate sector mutually reinforce their respective vulnerabilities, especially given that sovereigns are increasingly exposed to the corporate sector through contingent liabilities.

For the ECB, this is a warning signal, as the sovereign/bank nexus was a major “amplifier in the euro area sovereign debt crisis.” In 2020 to date, euro area banks’ exposures to domestic sovereign debt securities have risen by almost 19% in nominal amounts, the largest increase since 2012” according to the ECB’s Financial Stability Review last month.

However, the ECB doesn’t seem to be worried about a reactivation of the so-called doom loop between banks and sovereigns soon, as “so far the vulnerability of banks to higher holdings of sovereign debt securities has been contained, because valuation changes have been modest.” This is thanks to extraordinary monetary policy measures and the proposal of a recovery fund.

Such a scenario would look worse in countries where banks are overly dependent on domestic markets. European political leaders might want to reconsider their traditional red lines on completing the banking union. Had they succeeded in creating the conditions for a truly, fully integrated European banking sector, banks would have been in an even stronger position going into today’s crisis.

Robust banks are central shock absorbers in time of stress. As the second wave of COVID-19 forces parts of the continental economy into a deep freeze, it is clear that the stress is far from over.

Til Schuermann Partner and Co-Head of Oliver Wyman’s Risk & Public Policy Practice
URL: https://www.brinknews.com/covid-is-testing-the-limits-of-europes-banking-system/
Get ahead in a rapidly changing world. Sign up for our daily newsletter. Subscribe
​​