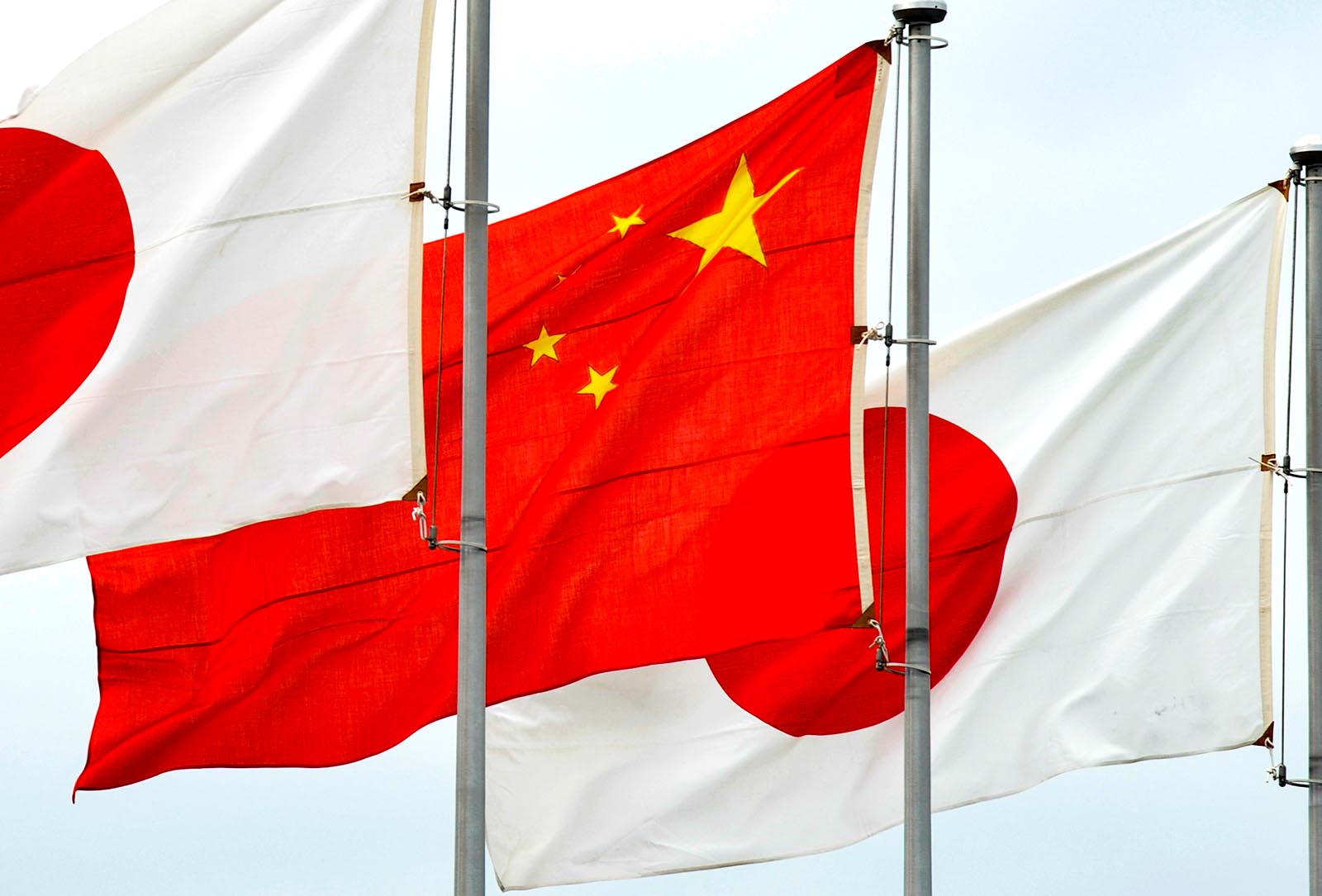 Chinese and Japanese flags on display in Tokyo. Japan is one of the largest investors in Asia, but China is expected to compete for dominance in the region in the near future.

This is the first story in a weeklong series on topics related to China.

Japan is one of the largest investors in the world and in Asia. Its international investment position remains hugely positive, thanks in part to the country’s substantial stock of overseas foreign direct investments (ODI) in the world, but there are signs that Japanese investment in the region could be slowing.

And on the flipside, the recent decline in Chinese ODI notwithstanding, Chinese investment in the region is expected to increase, given the manner in which China is leapfrogging its way up global value chains.

ODI flows from Japan to the world reached $168.6 billion in 2017, according to figures compiled by the Japan External Trade Organization (JETRO), slightly below 2016’s level of $173.9 billion. While this makes Japan a significant source of outward investment, it also constitutes a deceleration relative to the levels observed in 2016. Preliminary figures released by JETRO suggest that Japanese ODI to the world reached $37.6 billion in the first three months of 2018. While higher than China, it puts ODI figures on track to achieve a modest—by Japanese levels—$150 billion in 2018.

Can Japan manage to remain at the forefront of the investment game? For this, we need to turn to Asia. The region is not Japan’s main ODI destination (the U.S. is, followed by Europe), but it plays a strategic role as it has experienced very fast rates of foreign direct investment inflows in the past years. Asia also remains China’s largest ODI destination. This is where the battle for dominance between these two Asian giants will be fought.

Currently, Japanese investment is larger than that of China in terms of stocks and flows. Japan’s ODI stocks, representing the accumulation of ODI flows in the 10 largest economies in Asia excluding China, reached $259 billion in 2016, while Chinese ODI stocks in the same countries only reached $58.3 billion. Our calculations exclude investments to Hong Kong, which, representing 60 percent of China’s total ODI flows, acts primarily as an offshore intermediary of funds between China and the world. China hasn’t released updated figures for 2017 yet, but we expect the gap to have widened in 2017, on the back of a steep decline in Chinese ODI.

The main impediment to Japanese investment is an increase in competition from China. A looming trade war could also impact the Japanese economy.

Japan continues to play a more prominent role in the region for several reasons. First, it started investing much sooner than China. Japan has been a mature economy for a number of years. Therefore, Japan is much more affluent than most of its peers, including China, in the region in terms of per capita purchasing power parity. For this reason, labor costs are much higher, while labor productivity remains low due to structural issues. As a result, a lot of Japanese manufacturing has found its way into markets where cheap labor remains abundant. At a very early stage, this included places such as China, greatly aiding in the industrialization of the country.

More recently, a lot of this manufacturing has shifted to countries with lower labor costs in Southeast Asia. For example, average wages in Vietnam are $200 per month, compared to $400 in Thailand and $800 in China. This momentum has enabled Japanese companies to build an important presence in Asia-Pacific as well as in the world.

Moreover, at 4 percent of GDP, Japan has the second largest current account surplus in the world, after Germany. Much of this capital finds its way out into the world, in search for yield. Japan experienced very rapid rates of economic growth in the 1980s, but it has since undergone a protracted period of secular stagnation and deflation, following the collapse of the asset price bubbles in the 1990s. As a result, Japanese companies have turned to overseas markets for better returns on investments. Domestic economic conditions in recent years—in particular, negative interest rates—have accelerated the process further. Compounded with the fact that Japanese companies remain very cash-rich, this may help to explain why Japan remains a more active investor than China in both emerging and developed markets in Asia and beyond.

However, the country may have started to stumble into obstacles. The main impediment to Japanese investment has to be an increase in competition from China. Recent developments point toward increasing competition between both countries, which could pose threats to Japanese corporate interests. The main reason behind this convergence is that, while both countries had distinct approaches to trade and investment in the past, China has been very adept at leapfrogging its way up global value chains. This is part of a state-led strategy named “Made in China 2025,” which provides support for sectors that may aid in the country’s quest to boost value-add to avoid falling in a “middle-income trap.” This has already resulted in a dramatic change to the composition of China’s imports to and exports from Asia, as well as the sectors in which it invests.

Comparing ODI flows between 2006 and 2016* helps shed some light on this aspect. China moved from investing significantly into the extractive (mining) and infrastructure (transport and storage) sectors to focusing more on manufacturing, retail, and business services. The mining sector went from fourth place to 13th place between 2006 and 2016. Meanwhile, retail and business services have consistently ranked among the top sectors for Chinese investment, while manufacturing went from fifth to second place.

Retail and business services also rank among the top recipients of Japanese investment overseas. The country remains a key player in manufacturing, but its focus has clearly shifted. Manufacturing accounted for 69 percent of total ODI flows in 2006, falling to just 35 percent in 2016. Instead, a lot of its investment has refocused toward high value-added services and electronics sectors, in line with China.

In sum, as the two countries’ production structures are becoming increasingly similar, this has started to translate into a shift in Chinese investments away from mineral resources and toward sectors where Japan has traditionally played a stronger role, including manufacturing and services. Japanese ODI in Asia-Pacific will increasingly compete with Chinese strategic commercial interests.

The better performance of Japan’s economy in 2017 may have acted as a boost for Japanese domestic investment, perhaps at the expense of ODI flows. Recall that low returns on investments and poor economic performance—characterized by recurrent periods of economic contraction—remain among the main drivers of Japanese ODI. However, the economy has expanded for eight consecutive quarters, the longest streak of uninterrupted growth since 1989. In fact, capex expanded at the fastest pace in three years in the fourth quarter of 2017, leading the statistics office to revise its annualized GDP figure upward to 1.6 percent. This trend is likely to continue in 2018, with the economy forecast to grow slightly slower but still above potential at 1.2 percent in 2018.

That said, some clouds linger on the horizon. A looming trade war and a decoupling of global conditions could impact the Japanese economy. On the monetary policy front, the Bank of Japan (BoJ) will continue its accommodative stance, as the economic recovery will not be robust enough to generate sustained inflation. The BoJ would like to see core inflation reach 2 percent before it can reverse course on negative interest rates, but this is unlikely to happen anytime soon. Moreover, while the yen appreciated by 10 percent in the first quarter of 2018, it has since depreciated, raising questions about the sustainability of a yen bull-run. This is great news for exporters and Japan’s current account surplus, even if it may not bode well for the domestic economic context.

It does, however, support the case for a pickup in Japanese investment going forward. Competition aside, Japan will remain king.

*ODI by sector figures are only available for 2016. This is why 2017 figures are not used in this instance but have been used in other sections of this article.

Xianbin Yao Professorial Lecturer of International Studies at De LaSalle University Manila
URL: https://www.brinknews.com/foreign-direct-investment-in-asia-the-catch-up-game/
Get ahead in a rapidly changing world. Sign up for our daily newsletter. Subscribe
​​