Liability Insurance Shoots Up in First Quarter of 2020 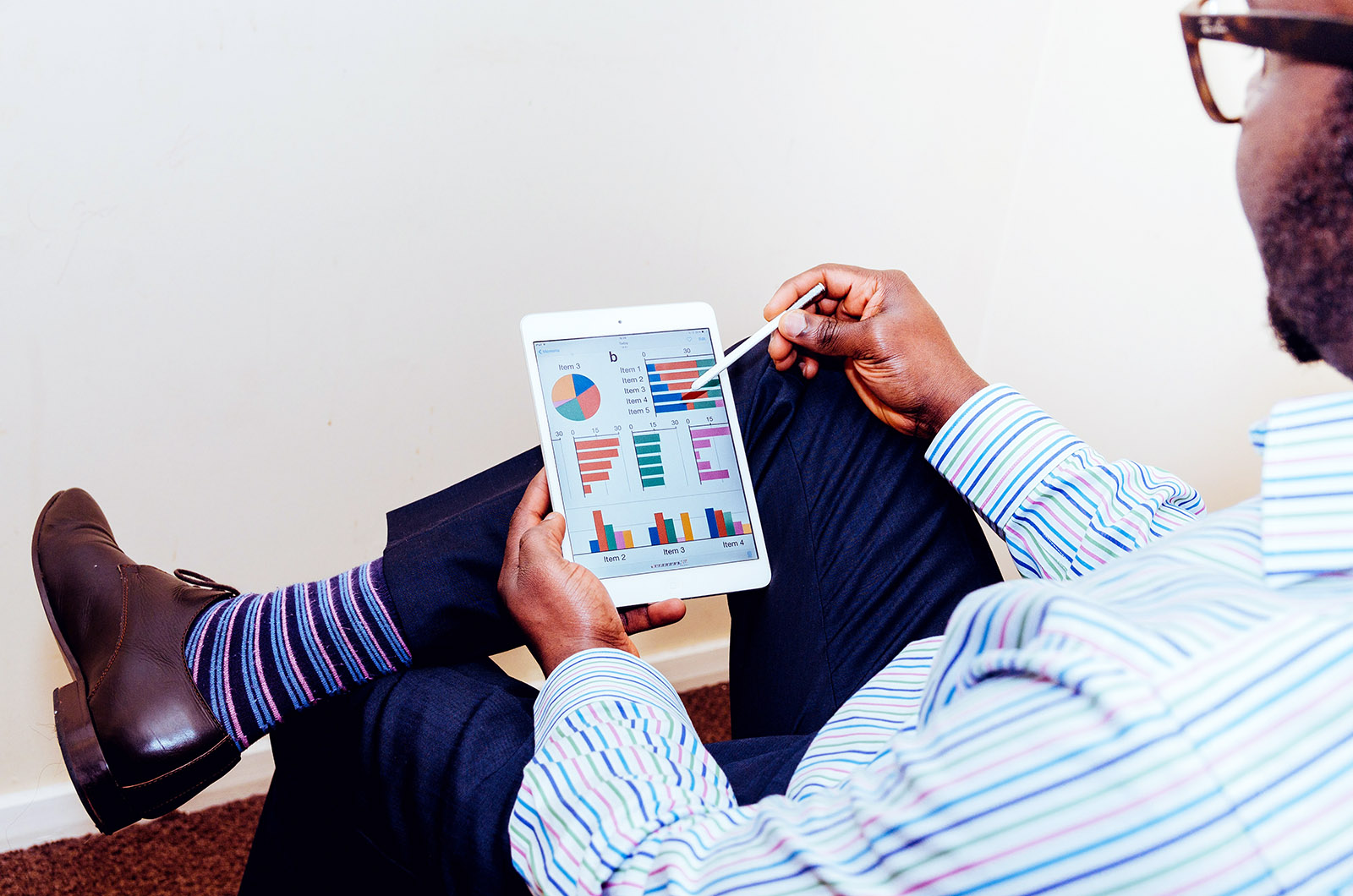 Global commercial insurance prices increased 14%, on average, in the first quarter of 2020.

All three major product lines — property, casualty and financial and professional — showed increases in the first quarter (see Figure 1). It was the 10th consecutive quarter of increases in the Marsh Global Insurance Market Index. Although the COVID-19 global pandemic had an insignificant impact on pricing in the first quarter, the reported increase was the largest year-over-year increase in the index since its inception in 2012. We anticipate that COVID-19 will likely have an impact on pricing for the balance of 2020.

The highest average levels of increase in the first quarter were observed in financial and professional liability, which increased by 26%, on average, while property insurance was up 15% globally. Casualty lines increased 5%. All regions have now demonstrated six consecutive quarters of composite pricing increases. 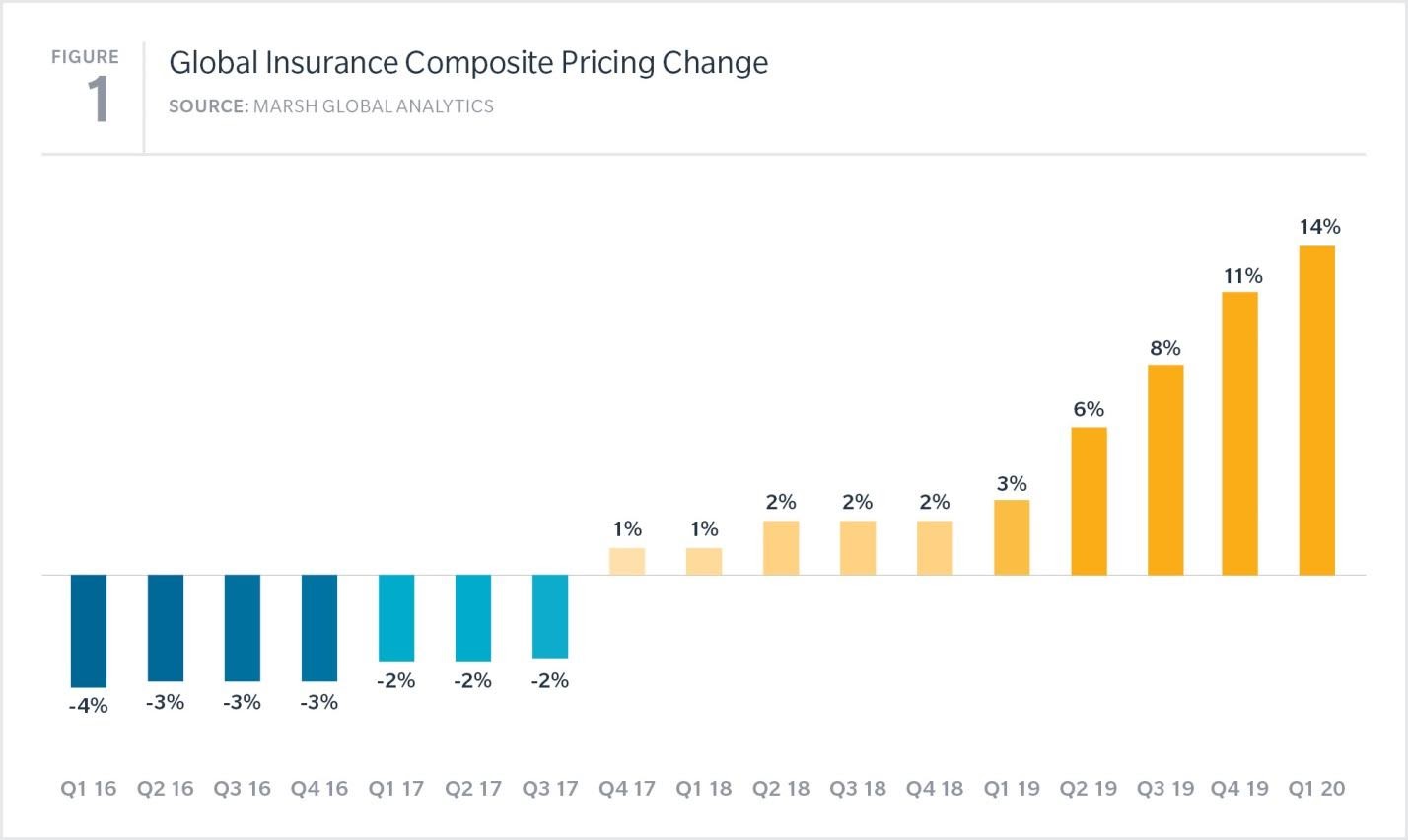 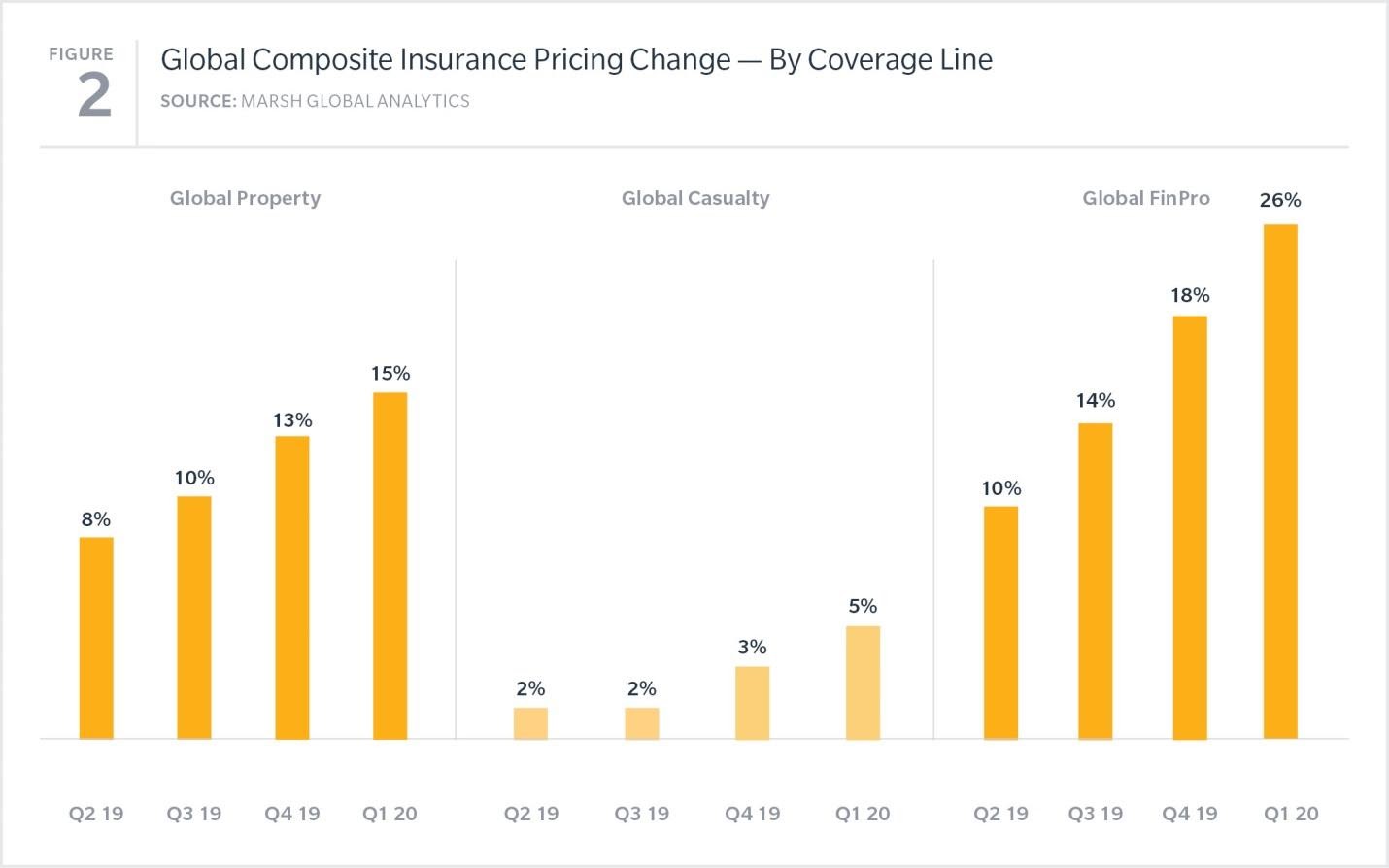 Led by increases in property and financial and professional lines, U.S. insurance pricing in the first quarter of 2020 increased 14%, year over year.

Financial and professional liability insurance rates in the U.S. increased an average of 23% in the quarter, driven by directors and officers (D&O) pricing, which increased by an average of 44%. Pricing influences included heightened litigation, with traditional securities lawsuits increasing in frequency and severity.

Casualty pricing in the U.S. increased by 5% in the first quarter. The excess liability market drove much of the overall casualty pricing movement, with average prices up 11%. Many risks experienced significantly greater increases. Automobile liability increased 10%, with 80% of clients seeing increase. Workers’ compensation pricing declined 1% in the quarter.

Overall insurance pricing in the first quarter of 2020 in the U.K. increased 21%, the 10th consecutive quarter of pricing increases. Overall pricing was driven by financial and professional liability, which was up by 46%, on average.

D&O pricing showed significant increases, with some large accounts experiencing hikes of 100%. Generally, midsize accounts saw smaller increases, but still had prices up 50% to 70%. Capacity in the D&O market has been shrinking since 2017, contributing to the increases in prices and a general trend toward greater policy restrictions.

Property pricing in the U.K. increased 10% in the quarter. Capacity in the market continued to decline as insurers looked to reduce their exposures on any given risk, as well across portfolios.

Casualty pricing in the quarter was up 5%. For larger organizations, in both employers liability and general liability, insurers began to seek portfolio increases and restrict capacity.

Insurance pricing in the first quarter of 2020 in Asia increased 6% year over year.

Property insurance pricing rose 8% in the region, on average. A lack of insurer competition continued to be an issue for large and complex risks.

Other regional highlights in the first quarter included the following:

Mark Campanale Founder and Executive Chair of The Carbon Tracker Initiative
URL: https://www.brinknews.com/global-insurance-pricing-continues-to-increase-in-first-quarter-2020-liability-insurance-q1-2020/
Get ahead in a rapidly changing world. Sign up for our daily newsletter. Subscribe
​​