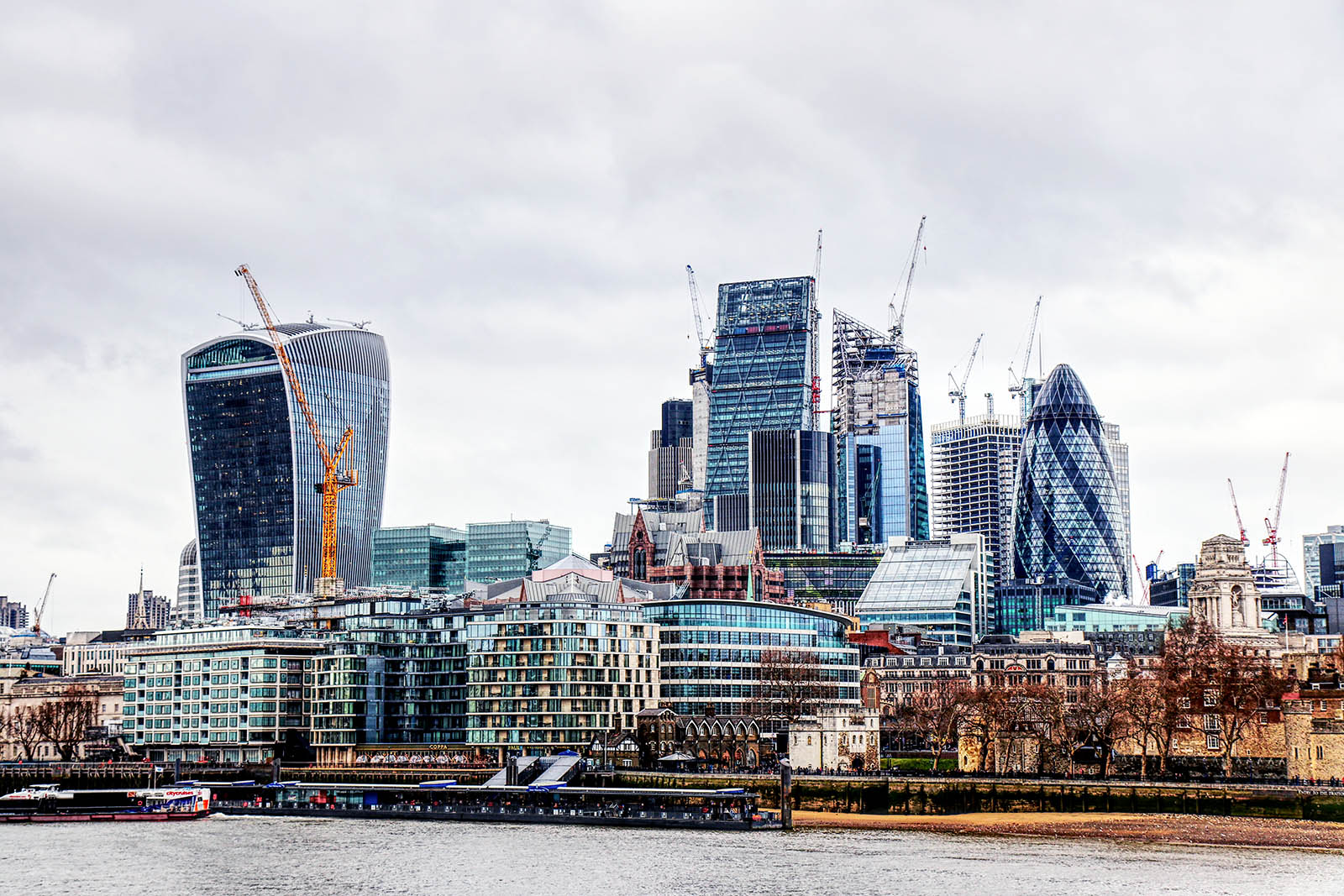 The financial hub of the City of London. Insurance pricing in the second quarter of 2020 in the U.K. increased 31%, year-over-year, the eleventh consecutive quarter of pricing increases.

Global commercial insurance prices increased 19%, on average, in the second quarter of 2020.

All three major product lines — property, casualty, and financial and professional — showed increases in the second quarter (see Figure 1). It was the 11th consecutive quarter of increases in the Marsh Global Insurance Market Index and the largest increase observed since the index’s inception in 2012.

While pricing movements in the second quarter were impacted by losses related to COVID-19, other large losses contributed to overall pricing pressures. As insurers continue to work through claims in property and directors and officers (D&O) insurance, and with the full cost of COVID-19 still developing, upward pressure on pricing is anticipated through 2020.

As was the case in the first quarter of 2020, the highest average levels of increase in the second quarter were observed in financial and professional liability, which increased by 37%, on average, while property insurance was up 19% globally. Casualty lines globally increased 7%, on average. All regions have now demonstrated seven consecutive quarters of composite pricing increases. 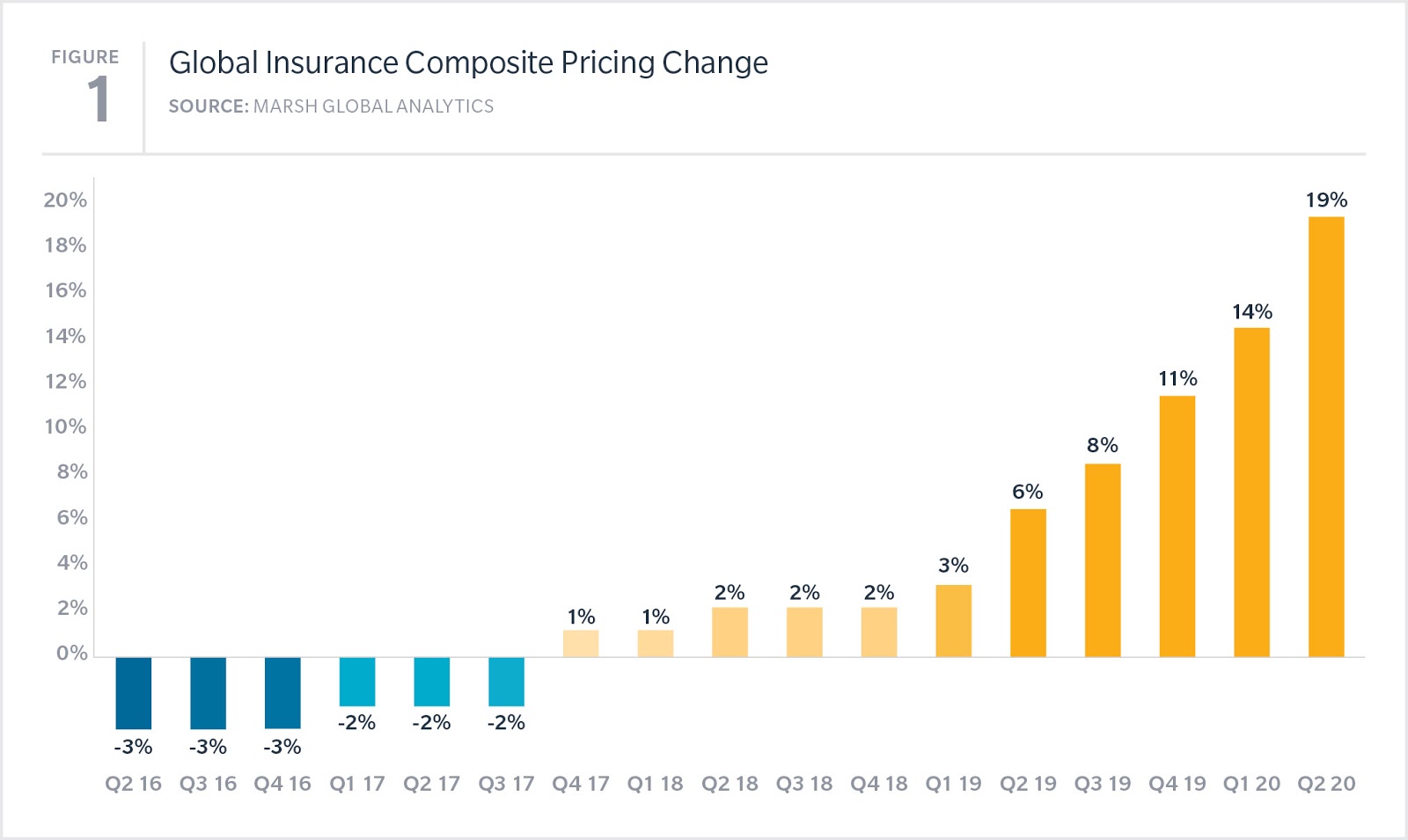 US Insurance Pricing Increases 18%, on Average

Led by increases in property and financial and professional lines, U.S. insurance pricing in the second quarter of 2020 increased 18%, year-over-year.

Property pricing in the U.S. has now increased 11 consecutive quarters (following the 2017 catastrophe events) and was up by 22% in the second quarter, the highest level recorded since Marsh’s survey began in 2012. Pricing for smaller organizations generally increased less than for midsize- to large risks.

Casualty pricing in the U.S. increased 8% in the first quarter, largely due to the excess liability market, where prices increased 21%, on average. Automobile liability increased 10%, with 75% of clients seeing an increase. Workers’ compensation pricing declined 2% in the quarter.

Overall insurance pricing in the second quarter of 2020 in the U.K. increased 31%, year-over-year, the 11th consecutive quarter of pricing increases. Overall pricing was driven by financial and professional liability, which was up 64%, on average.

Public company D&O experienced the greatest pricing increases within the UK market, on average up nearly 100%. The increased lack of insurer appetite to compete for business and the increased level of underwriting scrutiny have resulted in the general lack of competition in the D&O space. COVID-19 and increased insolvency exposures have only added to the level of uncertainty in this market.

Property pricing in the U.K. increased 16% in the quarter. Capacity in the market is still a challenge, resulting in increased premiums, split placements and more restrictive terms.

Casualty pricing in the quarter was up 5%, with auto/motor liability coverage showing the largest increases, typically in the upper single-digit range. Insurers are closely monitoring the potential impact of COVID-19, both in terms of reduced premium income due to a reduction in rateable exposure and eventual COVID-19 claims notifications. 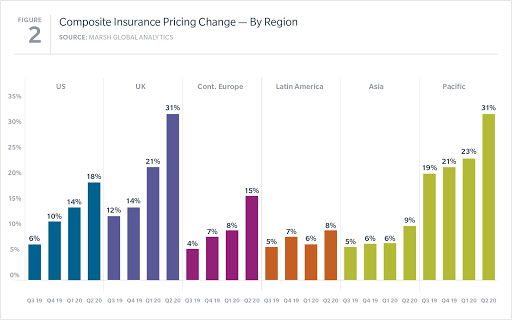 Insurance pricing in the second quarter of 2020 in Asia increased 9%, year-over-year.

Property insurance pricing rose 12% in the region, on average, with increases to varying degrees in all territories across the region, except in China, which benefitted from an abundant domestic supply of capacity. Large, complex and multinational programs saw the greatest impact on pricing, deductibles and limits.

Financial and professional liability pricing in the region increased 14%. A reduction in capacity, particularly from global insurers, contributed to pricing increases. U.S.-listed companies were most affected by D&O pricing increases, which were as high as 100%. Financial institutions generally experienced price increases across all lines of coverage as well.

Other regional highlights in the second quarter included the following:

Insurance pricing increased 31% in the Pacific region, continuing an upward trend that began in 2015. Property pricing increased 28%, on average, with bushfires and other CAT events driving the increase, with concerns surrounding COVID-19 also having an impact.

Til Schuermann Partner and Co-Head of Oliver Wyman’s Risk & Public Policy Practice
URL: https://www.brinknews.com/global-insurance-pricing-continues-to-increase-in-second-quarter-2020/
Get ahead in a rapidly changing world. Sign up for our daily newsletter. Subscribe
​​