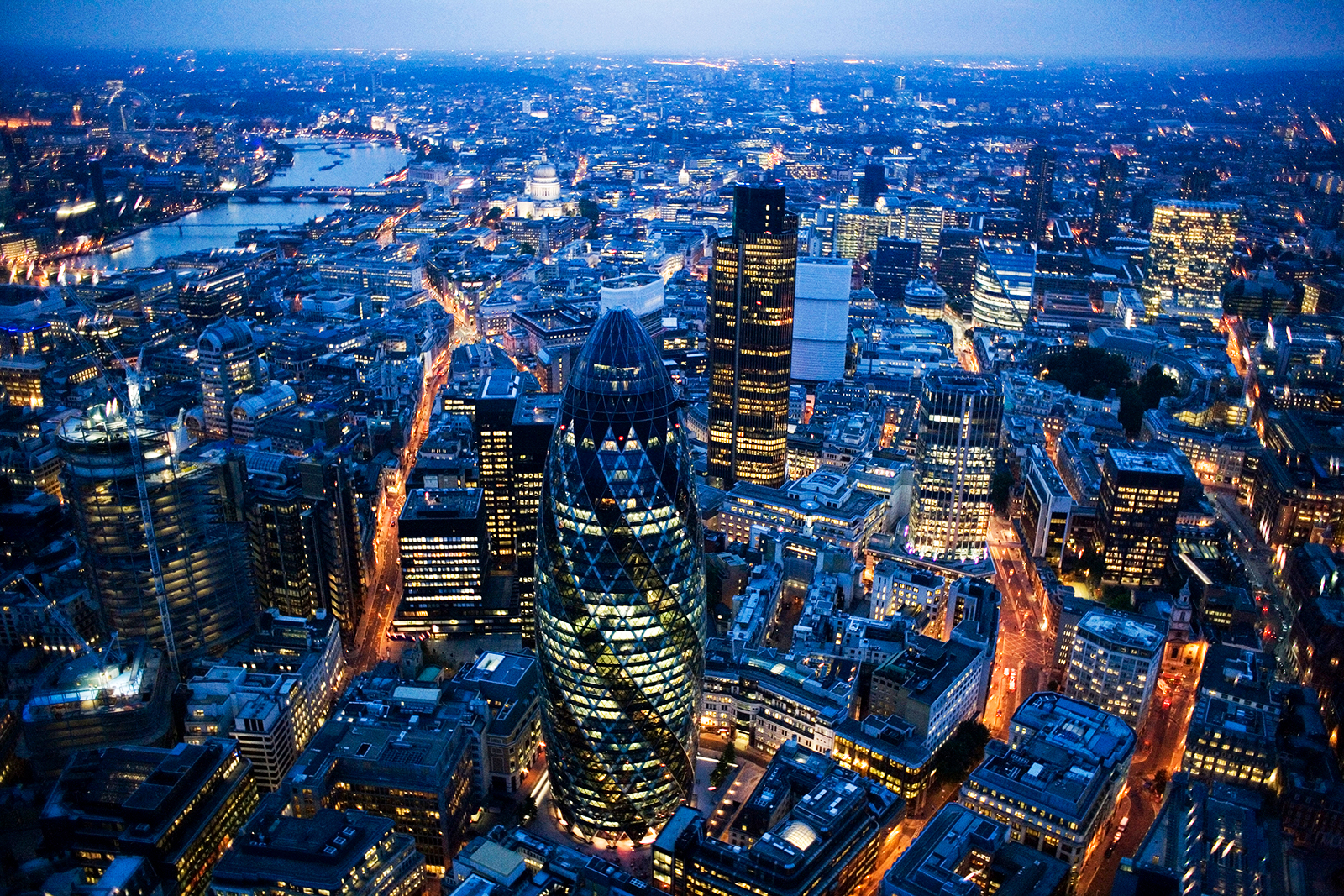 Aerial night view of the City of London. Insurance pricing in the second quarter of 2021 in the U.K. increased 28%, the highest average in any region and the fifteenth consecutive quarter of increases.

Global commercial insurance prices increased 15%, on average, in the second quarter of 2021, the second consecutive quarter that the pace of increase moderated, indicating that pricing increases peaked in the fourth quarter of 2020, at 22%.

It was the fifteenth consecutive quarter of increases in the Marsh Global Insurance Market Index (see Figure 1).

Average pricing for cyber insurance continued to diverge from the overall trend, with price rises — notably by 56% in the U.S. and 35% in the U.K. — driven by the frequency and severity of losses, particularly related to ransomware.

The U.K. and Pacific regions again led average increases, with composite insurance pricing up by 28% and 23%, on average, respectively. Average pricing in the U.S. rose by 12%, down slightly from the 14% year-over-year increase experienced in the prior quarter.

Average pricing increases in Continental Europe (13%), Asia (6%), and Latin America and Caribbean (4%) were all lower than in the prior quarter.

All three major product lines showed increases in average pricing globally, though less than the prior quarter for financial and professional lines (34%) and property (12%), while casualty remained the same (6%). 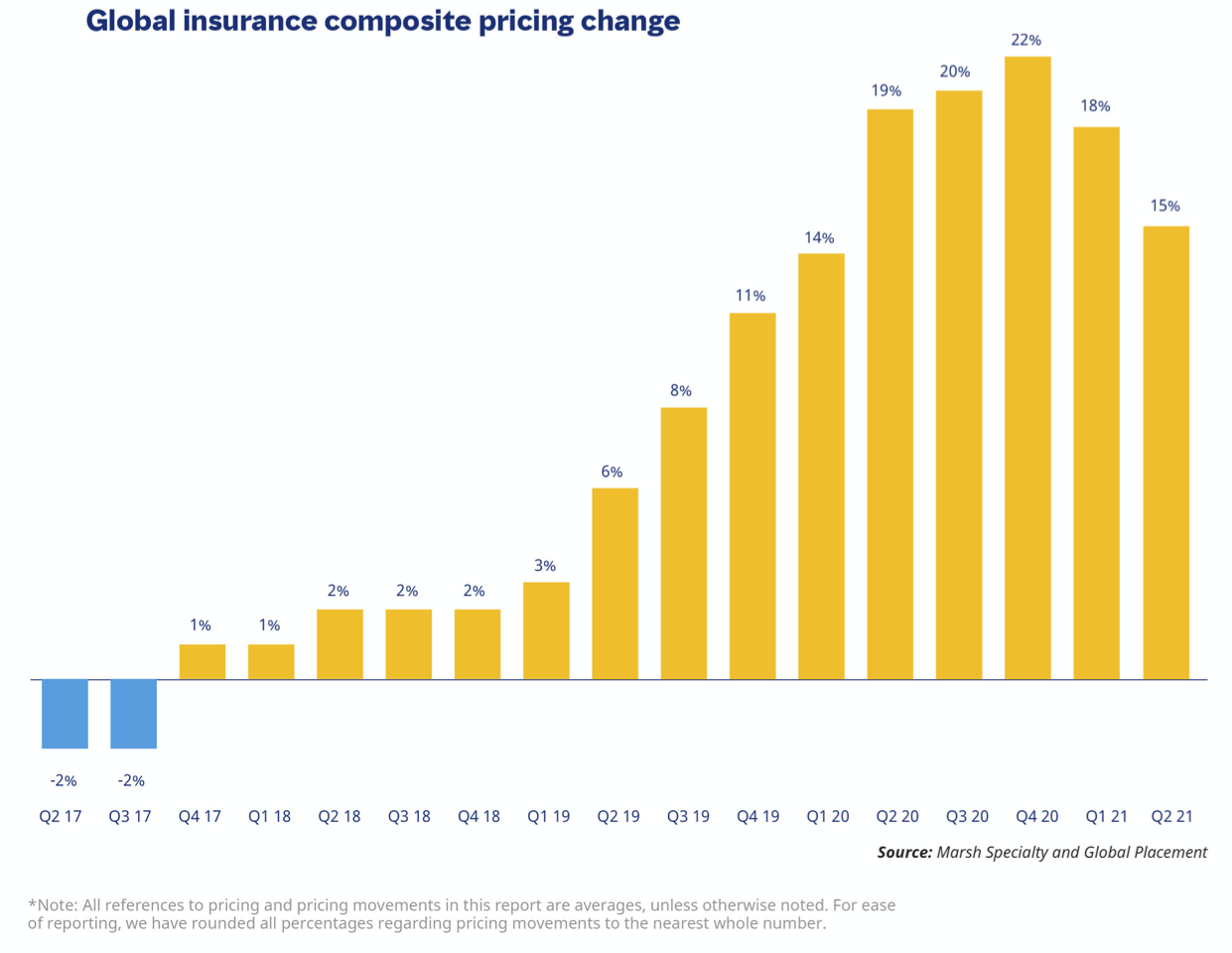 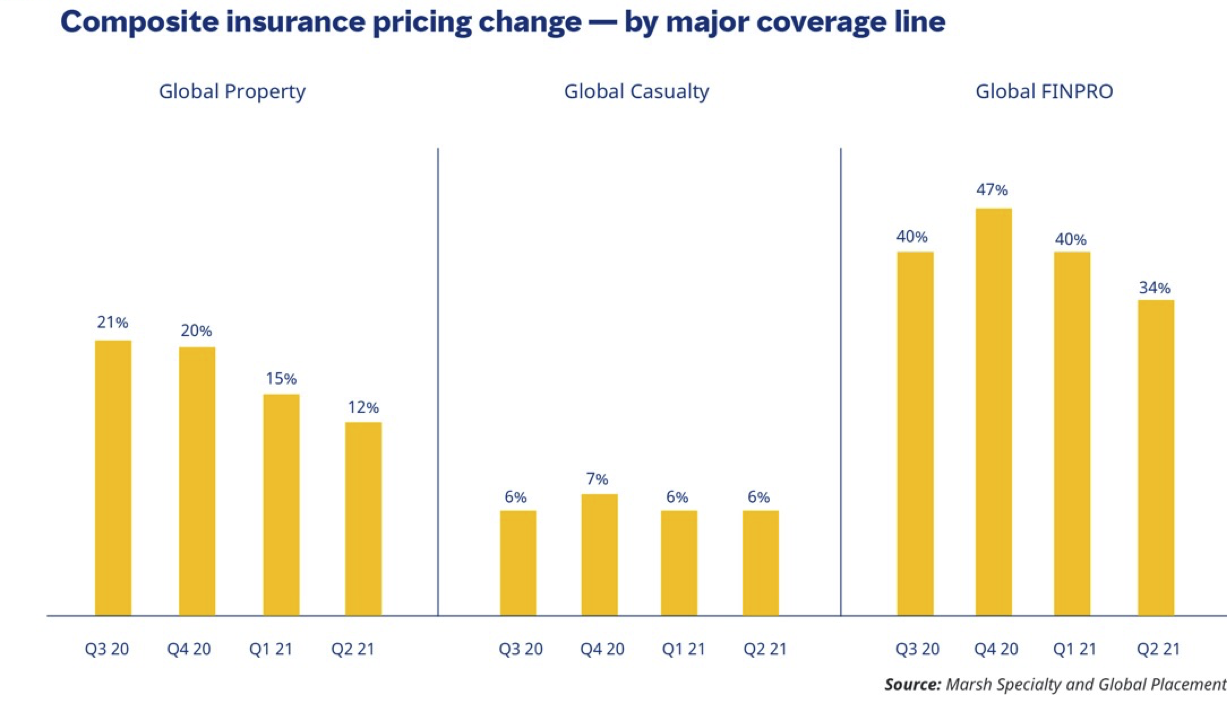 Insurance pricing continued to increase in the U.S. The average rate of increase slowed for the third consecutive quarter, to 12%, and appears to have plateaued.

Average property insurance pricing increases in the U.S. continued a trend from the first quarter, slowing each month, from an 18% increase in January to 7% in June. Clients with significant losses, poor risk quality or significant exposure to catastrophe perils experienced above average increases; the market deteriorated for clients heavily exposed to wildfire.

Financial and professional lines pricing in the U.S. increased an average of 25% in the quarter, with D&O pricing up 15%, which was less than the 27% year-over-year increase in the previous quarter.

Pricing for cyber insurance increased 56% on average, including an increase of 68% in June. The increase was driven largely by the escalating frequency and severity of ransomware events. The attacks have affected all industries, especially health care, manufacturing, educational institutions, and public entities. Some insurers significantly changed underwriting strategy, while others stopped offering cyber coverage.

Casualty insurance pricing in the U.S. increased 6% on average; excluding workers’ compensation, the increase was 10%.

Overall, insurance pricing in the second quarter of 2021 in the U.K. increased 28%, the highest average in any region and the fifteenth consecutive quarter of increase.

Financial and professional lines increased 57%, lower than the 71% average increase in the prior quarter. A number of new insurers entered the D&O market, which seems to have reached its pricing peak, although some clients still experienced triple-digit increases.

In other lines, property insurance pricing increased 15% on average, and casualty was up by an average of 7%. It was the eighth consecutive quarter of increase for casualty pricing.

The Opportunity to Design Real Catastrophe Insurance Is Now

Insurance pricing in the second quarter of 2021 in Asia increased 6%, year-over-year, a lower rate than the 8% average in the first quarter.

Property insurance pricing rose 7% in the region, on average, while casualty pricing remained generally flat in the quarter, as it has for several years.

Financial and professional lines pricing in the region rose 24%, on average, up slightly from the prior quarter. Insurers were highly selective on U.S.-listed D&O; rate increases ranged from 75% to 100% for some clients on the primary layers amid limited insurer appetite.

Other regional highlights in the second quarter included the following:

In the Latin America and Caribbean region, composite pricing rose 4%, on average. Casualty pricing declined 2% on average, the only decrease seen in a major product line globally.

In the Pacific region, pricing increased 23%, led by an average 37% increase in financial and professional lines. Property pricing rose 14% on average, a moderation from 20% in the first quarter. Casualty insurance pricing rose 18% on average, the largest year-over-year increase since 2012.

Bilal Mughal CEO of Blue Marble Microinsurance
URL: https://www.brinknews.com/global-insurance-pricing-increases-moderate-in-second-quarter-2021/
Get ahead in a rapidly changing world. Sign up for our daily newsletter. Subscribe
​​