How Trade and Infrastructure Will Help Feed Tomorrow’s Cities 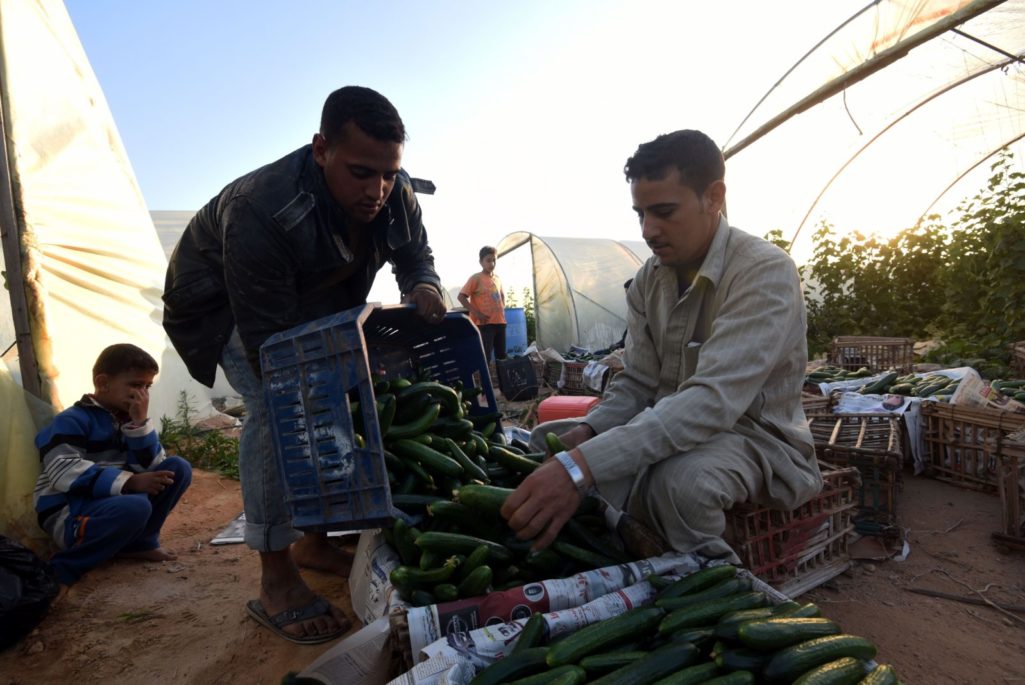 Farmers sort cucumbers into boxes at a farm near the village of Kafr Daud, in Egypt's Menufiya district, north of Cairo on April 2, 2016. (Photo by Mohamed el-Shamed/Getty Images)

In 1893, suffragette Mary Elizabeth Lease predicted that all food would be in the form of a pill by 1993. Other science fiction writers and futurists, such as H.G. Wells and Arthur C. Clarke, also predicted that urban populations would soon eat synthetic foods and that agriculture would become obsolete.

But 1993 has come and gone, and the futurists have been proven wrong, even though we live on a planet that is increasingly urban. In China alone, there are 15 megacities with more than 10 million people. People who live in cities are not subsisting on pills—at least not for food. Not even close. If anything, we are as dependent on farming as ever.

The explosive growth of cities will require a 60 to 70 percent increase in net global food availability by 2050, according to a new report by the Chicago Council on Global Affairs. But with current food waste levels, this means a 90-105 percent increase in overall food production. The increased demand for food is not happening in a vacuum. According to the report, it is happening alongside a number of equally significant pressures on the food system, from weather volatility to chronic hunger. Feeding urban populations, the report adds, has become “an urgent and critical challenge.”

The planet is changing. In 1951, I was born on a farm near King City, Missouri, and about 30 percent of people lived in cities. Today, 54 percent of the world’s population is urban, and by 2050, nearly 70 percent of the global population will be living in cities, according to the United Nations. That’s as many people as are alive today. Urbanization will complicate food security and affordability because farmers will need to feed more people and ensure a large surplus of food that must flow from the countryside to cities.

That’s just the issue of calories; nutrition and consumer choice complicate the issue further. Urban consumption patterns have changed over the years as demand has grown for animal proteins (e.g. dairy, eggs, meat and seafood) and for fresh produce year-round regardless of the season, putting more stress on the global food system. We see the consequences of food scarcity and urbanization in the form of increased political and social instability in countries that are more dependent on food imports.

Most experts focus on food security issues within the context of 2050 food demands and urbanization, but there is also an important rural challenge to consider within this context. Rural areas will need to increase food production and produce it more sustainably.

This is about producing more with less, increasing efficiency and productivity and reducing waste. This is about how we produce enough for an increasingly urban global population.

There is another issue to consider that is generally overlooked in this type of analyses. How will increased urbanization impact the rural poor? According to the International Fund for Agricultural Development, most of the nearly 800 million people globally who do not have enough food to eat are farmers. In fact, most malnutrition and stunting are in rural areas, not in cities.

Urbanization will increase demand for food from cities and governments will concern themselves with the cost of food to urban consumers because food riots can quickly change governments.

While lower prices may be convenient for urban dwellers, they are not helpful for farmers. This is especially true for smallholders with very little land to produce food for themselves. Urbanization, then, will likely maintain the persistence of malnutrition and stunting in the countryside, at least for those farm families who choose to remain there rather than move to cities.

Similarly, migration to cities is impacting rural demographics. For example, only 12 percent of Thailand’s farmers are younger than 25. And in the U.S., the average age of a farmer was 58, according to research from DuPont’s Advisory Committee on Agricultural Innovation & Productivity. Across the globe, in both developing and developed countries, farmers are getting older and rarer. Yet, each farmer is expected to produce more surplus that can be transported to cities.

About a third of all food produced is wasted or lost, either on the farm or in transit or by consumers, according to the UN’s Food and Agriculture Organization. In developing countries, post-harvest loss is most common because the infrastructure (e.g. storage, transportation, refrigeration) is lacking. In developed countries, consumers can waste more than a pound of food every day.

Why do we spend so many of our research dollars on increasing productivity and so little on reducing waste? Any serious attempt to produce enough food to feed growing cities will have to prioritize the reduction of food waste. While we can never completely eliminate food waste, even reducing it by half would have a huge impact. We should start by asking which strategies work best to reduce food waste and which can be scaled more quickly.

About half of global food waste occurs “upstream” in post-harvest handling, transportation, refrigeration and storage. Once food is produced, we should do everything possible to make sure it gets to the consumer. This is likely to become even more difficult when the consumer lives further and further from the producer.

History shows, however, that we are probably not willing to make the necessary infrastructure investments that are required to mitigate this issue. This lack of foresight and the inability to anticipate issues rather than react to them is one of the more worrisome issues regarding our ability to feed an increasingly urban world.

In developed countries, we should think carefully about where we put our efforts. Do we push the bottom to do better by regulating waste, preventing grocery stores from destroying unused food and incentivizing them to give it to those who need it, as some European countries have done? Or, is the best approach a combination of voluntary efforts from producers and the private sector combined with incentives from national or local governments?

Some food will always be wasted, regardless of our efforts, but can we invest in the development of the next generation of anaerobic digesters to recapture some of the energy embedded in food waste and create value by converting millions of tons of urban food waste into energy?

Upgrading the infrastructure behind our food system will be a daunting task. That is why governments and companies must collaborate to build sustainable supply chains. To feed a growing urban population, we will not be able to simply double the amount of land used to produce food. We are going to have to produce more with less.

For example, what would it take for food companies to invest in and scale up the efforts of innovators in urban farming like A.G. Kawamura? With 1,000 acres split among 40 fields producing fruits and vegetables across Orange County, California, Kawamura is pushing the boundaries of urban farming within the sixth most densely populated county in the U.S.

Entrepreneurs are using heat and water from stranded assets such as power plants to grow food in places such as Brooklyn, New York and Cambridge, Massachusetts. Meanwhile, outside the city of Modesto, California, a 6-mile $100 million pipeline is being built to carry urban wastewater to farmers who are willing to pay four to five times the normal water price for it.

Much like the revolutions taking place in the energy, bio and tech sectors, the next revolution in food production will be built on the interchange of expertise and ideas from a much wider network of thinkers, innovators, explorers and extrapreneurs. Whether they are working in fields, garages or some of the world’s most advanced labs, they are much more likely to be found in cities than on farms.

Trade will also be a key aspect of any successful strategy to feed our cities. Since 1986, the amount of globally traded food has doubled, and today, about a quarter of the food produced for human consumption is traded internationally.

Clearly, some crops are more traded than others. Comparative advantage is real. It is expensive to grow tropical crops in temperate areas, just as it is easier to produce large food surpluses in areas that can be mechanized. In short, it will always be easier to produce surplus food in some places and do less harm to the environment.

While trade has often been seen negatively when it comes to food, self-sufficiency in food production in today’s world is impossible for urban areas. We need to find ways to facilitate smart, efficient trade rather than hinder it.

Trade will only become more common. Urbanization will push companies and governments alike to seek out the most efficient sources of food production. Furthermore, it will be increasingly important to have access to multiple food producing regions in the face of increased weather variability caused by climate change.

According to FAO, a small group of countries is responsible for the lion’s share of global grain production and exports. For example, Argentina, Australia, Brazil. Canada, France, Ukraine, Russia and the U.S. account for more than 85 percent of global wheat exports.

This concentration can be risky: in 2012, droughts hit some of these major producers, including the U.S., Canada, and Australia. This was followed by a dip in global grain reserves to their lowest levels in 40 years. Before that, drought in Russia triggered a global cascade of food issues that resulted in the Arab Spring.

And, over the past year, major food exporters such as Brazil continue to be buffeted by currency fluctuations. These countries do not feed the world. Rather, they fill in the cracks caused by weather, famine, pestilence or political upheaval.

Generally, though, local crops feed the world. Hundreds of traditional food crops have sustained communities for centuries. Many of these local food crops—so called “orphan crops”—are not traded globally. They include cassava (the third most important source of calories in the tropics), millet, sorghum, teff and others that are the basis for traditional staples such as Ethiopia’s injera or Ghana’s fufu.

The question is what will new urban residents want to eat: What they ate traditionally, e.g. nostalgia food, or the foods they could never find or afford before? Urban residents are often willing to pay higher prices for food. While orphan crops are nutritious, adapted to local conditions and may provide more resiliency to changes in weather and climate, urban consumers may well turn to the new, exotic or even cheaper foods that they could not access before.

In short, what people in cities eat will shape the future of the countryside. In reality, this has long been the case. As cities become more linked to each other and less linked to their immediate environs for the first time in human history, the global food system will change as well. Our challenge is whether we can manage this change or whether it will manage us.