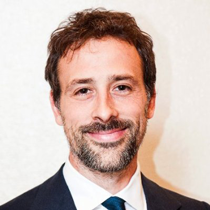 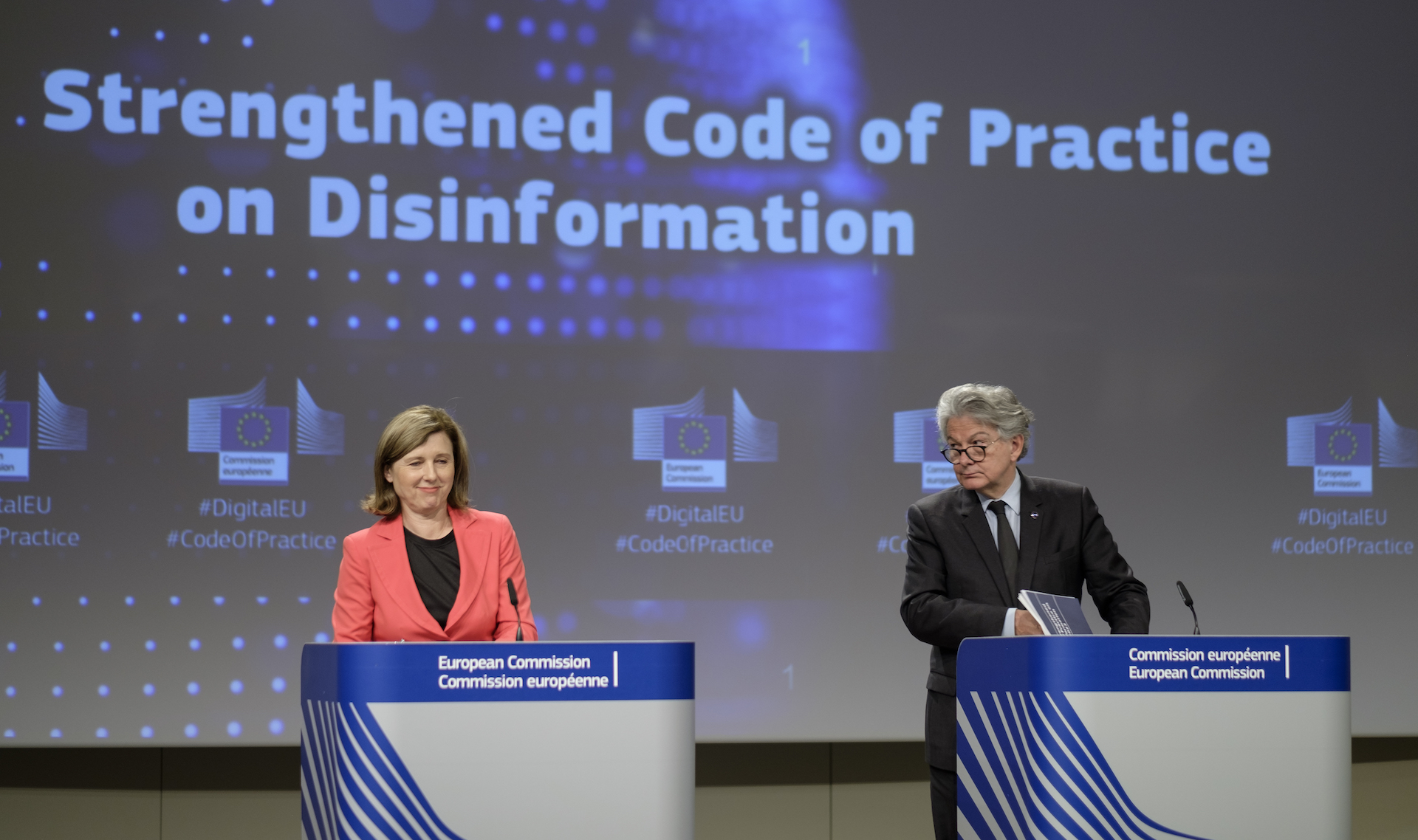 EU Commissioner for Values and Transparency Vice President Vera Jourova (L) and the EU Commissioner for Internal Market Thierry Breton (R) talk to media in the EU Commission headquarters on June 16, 2022 in Brussels, Belgium, after the publication of a strengthened Code of Practice on Disinformation. The EU is increasingly intervening on digital issues such as privacy, fake news, and the use of AI.

How well are EU policy institutions keeping pace with the digital space? The EU has made it clear that it intends to intervene in digital platforms and products to reduce social inequity and preserve privacy.  But there are so many areas — AI, the metaverse, privacy, disinformation — for regulators to monitor.

Mario Mariniello was the digital advisor to former European Commission President Juncker’s in-house think tank, EPSC. He is currently a member of the European Commission’s unit dealing with the Future of Work and the author of ”Digital Economic Policy” (Oxford University Press, 2022).

BRINK: So how well are the policymakers managing?

MARINIELLO: First, I need to make a disclaimer: For the purpose of this interview, I’m expressing my personal views (which may be different from the European Commission’s ones).

I would say in some areas of EU digital policy, things are going pretty well; in some others, maybe a little bit less. There is a lot of interest now in dealing with subjects that were considered maybe too complex or too obscure somehow up to some time ago. And that’s definitely a positive development. On the other hand, there is always the temptation of having reactions that are more driven by emotion than by careful analysis of cost and benefits.

MARINIELLO: It’s important not to be naive anymore about digital issues. We cannot just have a laissez-faire approach, we need to intervene in the issues out there. The key thing is to preserve innovation energy while at the same time, protecting individuals. Despite the narrative that digital is going to bring civilization and have a lot of benefits for everybody, we see that, while societies are becoming more and more digital, they are also at the same time becoming more and more unequal.

This is the real challenge from a policy perspective: to be able to allow the digital markets to produce that value, but at the same time, being sure that that value is accessed in a more symmetric way by all members of society.

BRINK: Disinformation is a big area that concerns policymakers. Given the massive amount of data now available, is that something that you think is solvable?

MARINIELLO: Saying it’s solvable would be an extreme statement at this stage, but we can certainly do something to improve the situation. That’s for sure.

Now, what can you do? Some policymakers have claimed that in order to address the issue of disinformation, we should try to reduce the ability of individuals to hide somehow on the internet. But that’s a bit of an emotional response because we know that those who want to disseminate disinformation also have the means to circumvent laws that prevent anonymity, and you might prevent some people from expressing themselves. So you might come up with a solution that is even worse than what you had before.

Fake news travels much faster than other types of news and is, therefore, more likely to increase the traffic to the servers of the platform.

One of the many factors is the fact that online platforms tend not to internalize the effect that the dissemination of disinformation has on the rest of society. Fake news travels much faster than other types of news and is, therefore, more likely to increase the traffic to the servers of the platform. So fake news increases the profitability of certain business models.

If the markets are not functioning properly, if there is not enough competition in the markets, then users don’t really have a choice between different platforms. So that mechanism is not actually working.

Increasing competition in the platform markets is the intent of the Digital Markets Act. There are other solutions; education is actually playing an extremely important role here as well. But again, there are no simple solutions to this complex problem. The solution has to be sophisticated and multidimensional.

BRINK: And what about privacy? How do you put a cost on that, or how do you make platforms pay for that?

MARINIELLO: It’s a mix of old and new instruments. Again, greater competition can help. If I know that this social network will not use my data, or that they will reduce the likelihood of a data breach, because it’s implementing some sort of measures that are more advanced compared to another platform, then I would tend to use that service.

But you also need to design new instruments like transparency. For example, the GDPR was definitely a good step, but there are many, many steps to take in order to make it more effective at an implementation level.

If you think about, for example, the consent forms, nobody reads them, right? It’s also about making this really effective in practice. So again, it’s a mix of different instruments.

BRINK: What do you see looking down the track are going to be the biggest changes that maybe people are not yet prepared for, or policymakers are not yet thinking about enough?

MARINIELLO: It’s hard to find something that policymakers are not thinking about at the moment. I mean, actually, already they’re thinking about pretty much everything. Consider, for example, the metaverse. The metaverse might be an entirely new planet where many of these that we have been observing are replicating themselves or even are exacerbated, and many new issues will pop up.

Now, we are coming a bit exposed. The point is to try to learn from the past and anticipate future issues without being surprised if, in 20 years’ time, things are not developing as well as we thought they could. We need to work on anticipation. But on the other hand, it is also a delicate process because you don’t want to start regulating something that hasn’t even been developed yet.

It has to be something in which policymakers need to be more and more involved in a smart, agile way. So they shouldn’t be just presented with the fait accompli.

BRINK: How do policymakers regulate areas they might not fully understand, such as AI?

MARINIELLO: This is an extremely important point that I agree with. You start by being digital yourself; you need to open yourself to digitalization. Otherwise, of course, you don’t understand what you don’t use. This is not just about buying a computer or adopting a certain artificial intelligence application in the public sector, it’s about building a different mentality, which is what digitization has also brought.

It’s also about becoming more and more agile in terms of the relationship that the public sector has both internally and externally. So becoming, for example, more horizontal and less vertical, relying more on outsourcing, these kinds of things. In that sense, you become a bit more similar to what you aim to deal with with your policy intervention, to what you aim to regulate. It’s very important not to end up regulating something that you don’t know because then the likelihood to get it wrong is quite high.

Mario Mariniello was the digital advisor to former European Commission President Juncker’s in-house think tank, EPSC. He is currently a member of the European Commission’s unit dealing with the Future of Work, visiting professor at the College of Europe and University of Namur, and the author of “Digital Economic Policy” (Oxford University Press, 2022).

Anne Toomey McKenna Visiting Professor of Law at University of Richmond School of Law
URL: https://www.brinknews.com/how-well-is-the-eu-regulating-the-digital-space/
Get ahead in a rapidly changing world. Sign up for our daily newsletter. Subscribe
​​