How Current Events Are Shaping Risks in the Maritime Industry 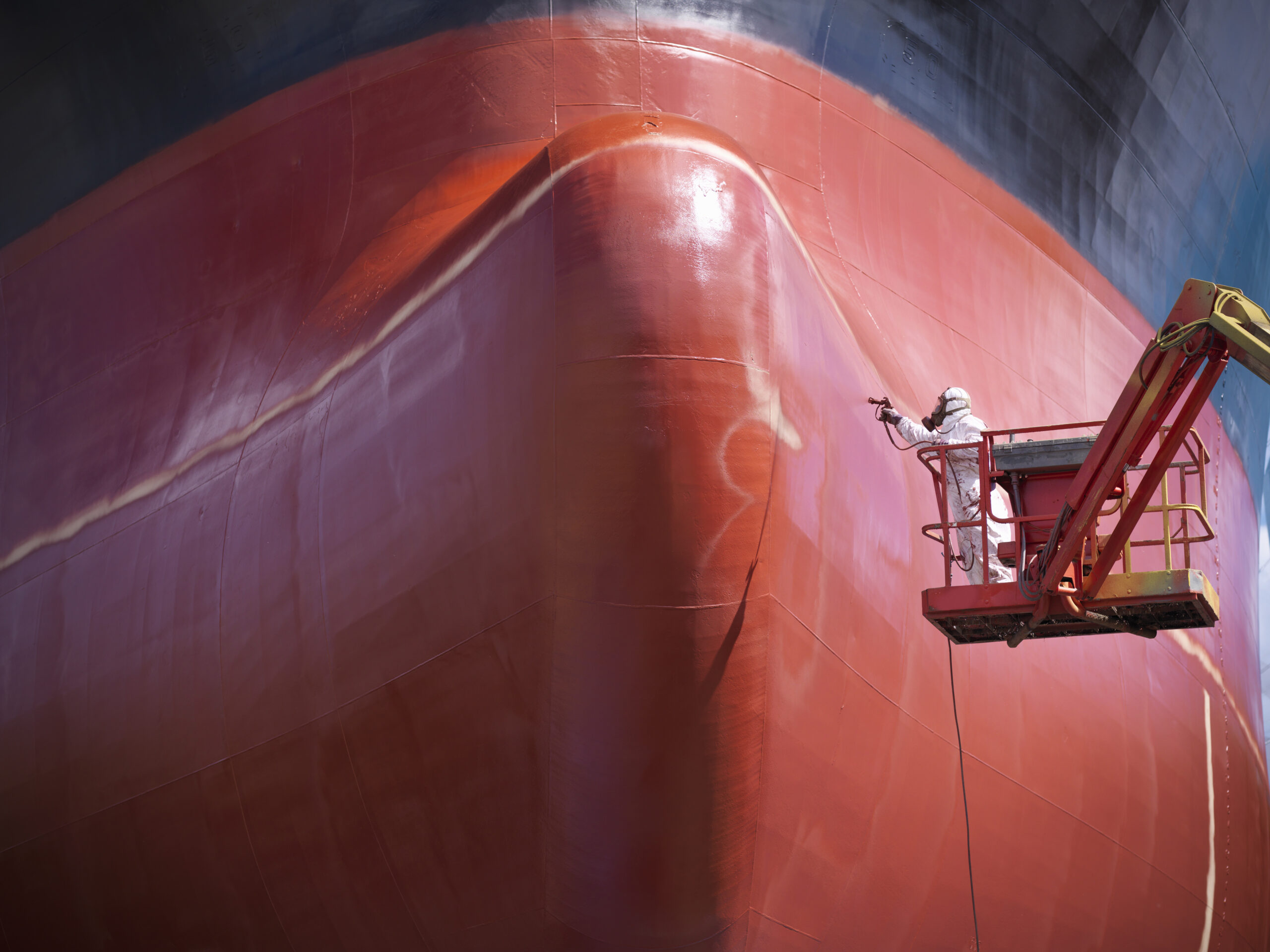 Like most industries, the maritime industry has been hit hard by workforce shortages, geopolitical events, and the pandemic.

The maritime industry, like many others, continues to view environmental issues stemming from the global energy transition as among its most challenging. At the same time, the Russia-Ukraine conflict, digitization, the pandemic, and worker shortages remain key areas of concern, according to the Global Maritime Issues Monitor 2022 survey.

This was the fifth year that the Global Maritime Forum — with support from Marsh and the International Union of Marine Insurance — conducted the survey, which looks at the impact, likelihood and preparedness for 18 key maritime issues. As a critical link in global supply chains, the way the maritime industry handles these issues is of broad importance.

Although the survey asks respondents to consider the risks from a 10-year perspective, it’s no surprise that current events once again played a role in the results.

The decarbonization of shipping and navigating new environmental regulations ranked as the top two issues facing the industry in the coming 10 years, the second consecutive year they have done so. In a positive sign, there was a slight improvement in 2022 respondents’ views on how prepared the industry is to manage these two issues.

Still, the failure of climate change mitigation and adaptation remained third among the issues for which the industry is least prepared. It’s possible that those in the maritime industry feel less in control of broader, society-wide climate issues than they do for decarbonization, which is so directly tied in with the transition to greener fuels for shipping.

As my colleague, Amy Barnes, head of climate and sustainability strategy at Marsh, said in the report: “The maritime industry is not alone in its worries about preparedness for climate change adaptation. As with other environmental, sustainability, and governance (ESG) issues, developing a climate mitigation strategy is often not a matter of awareness, but of action. Many businesses are genuinely committed to engaging with environmental and other ESG issues, but are not sure where to focus their next steps.” 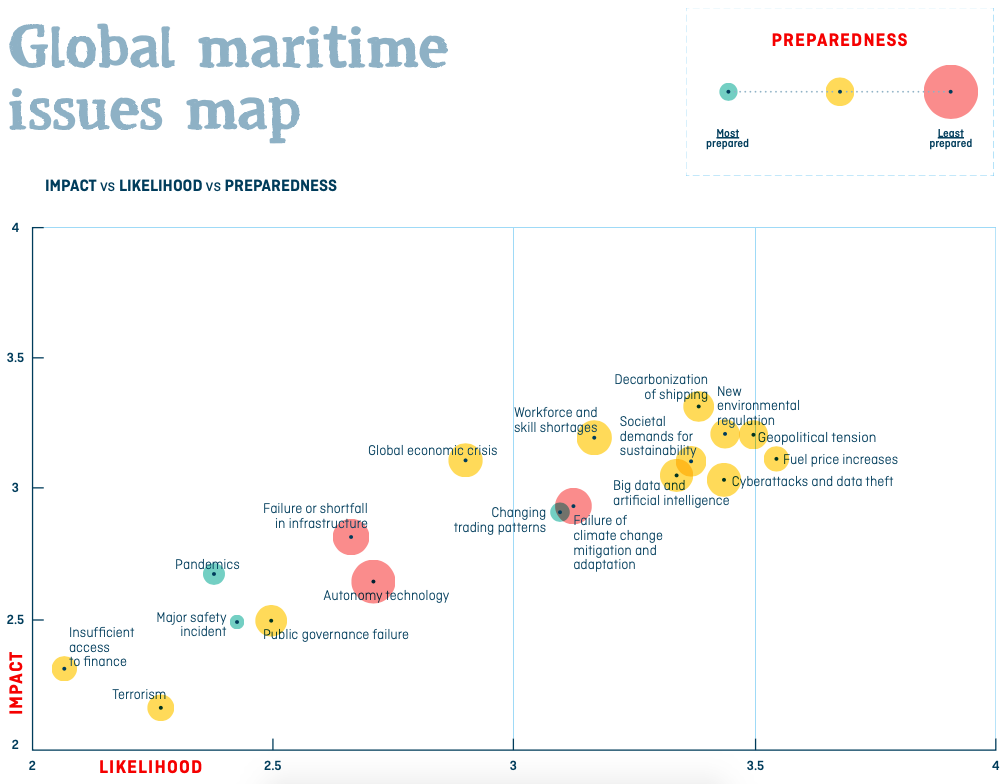 This year, issues that were top of the news featured prominently in survey results.

In a testament to the industry’s long history and ability to handle conflict, maritime stakeholders indicated the industry is well prepared to manage both the geopolitical situation and fuel price increases. About 35% of survey respondents said the conflict affected their business or made them reassess supply chain resiliency, trade routes, and/or vendor credit positions. That number is likely to have increased as the conflict has continued.

Respondents noted a number of impacts from the conflict. Direct impacts included:

The expected impact and the likelihood of workforce and skill shortages continued to increase this year, while the level of preparedness decreased.

Indeed, some stakeholders view it as the main threat facing the industry in the coming decade.

While the need to address workforce, skills and talent is widely acknowledged, the issue is a growing concern. Indeed, some stakeholders view it as the main threat facing the industry in the coming decade, one that is exacerbated by COVID-19 lockdowns in China and the Russia-Ukraine war, which have combined to drastically reduce the supply of competent seafarers.

One of the critical impacts on the maritime industry from the COVID-19 pandemic has been that thousands of seafarers have been stuck on ships beyond the expiration of their contracts. In turn, the crew change crisis now reinforces the perception that the industry is not well prepared to overcome a looming workforce shortfall.

Given the relentless pace of digitization, exposure to cyber risks increases. Initiatives in the maritime industry to increase speed, decrease delays, improve visibility into supply chains, and become more efficient also increase the reliance on technology.

In the 2022 survey, cyberattacks and data theft, big data and artificial intelligence, and autonomy technology, again, scored high on likelihood and low on preparedness. Given the key role the maritime industry plays in the global economy, any disruption may well ripple through global supply chains.

Such risks underscore how important it is for those in the maritime industry to invest in smart digitization strategies that identify and address vulnerabilities, creating a cyber-resilient organization that is able to withstand and recover from an attack.

The focus on the pandemic has declined in the maritime industry, as it has in others, amid a general feeling that the worst of COVID-19 is behind us. This was the third year that “pandemic” was included in the survey, and respondents continued to view a future pandemic as less likely, ranking it sixteenth in terms of likelihood this year compared to thirteenth in 2021 and tenth in 2020.

It’s worth raising caution that even if companies view a pandemic as less likely, they should remain on guard against the possibility of future ones.

As we have seen again this year, new issues will arise and existing ones will change for the maritime industry in the coming decade, including environmental concerns, workforce and skill shortages, cyber risks, geopolitical tensions, and others. While the perceptions of relative impact, likelihood and preparedness for various issues will shift from year to year, industry leaders will do well to continue discussing and preparing for the full range of risks.