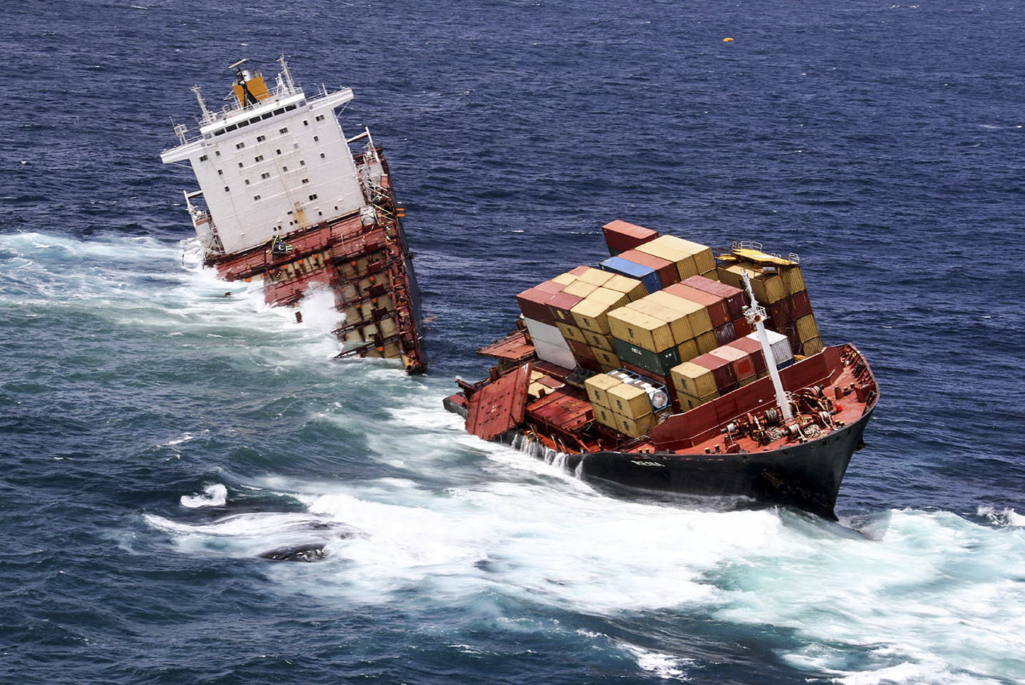 In this handout provided by Maritime New Zealand, MV Rena is seen in two pieces after overnight bad weather pounded the vessel, on January 9, 2012 in Tauranga, New Zealand. The Rena struck Astrolabe Reef off the coast of Mt. Maunganui on October 5, 2011 and has spilled 350 tonnes of oil, and almost 100 shipping containers into the sea.

Over the past 12 months, record-breaking, super-sized container ships spanning the length of four football fields and rising as high as 20 stories are straining the limits of today’s port infrastructure, increasing risk and carrying complex cargoes sailing through areas of the world where the salvage industry is ill-equipped to handle such large potential casualties. The risks attached to these megaships are a major concern for operators, insurers, salvors and environmentalists alike.

Compounding the risk is the lack of accurate and updated maritime navigational charts needed to ensure these new megaships have the clearance to move safely.

In the 1970s, the largest container ships could carry up to 2,500 20-foot equivalent units (TEUs) of containers. A typical cargo container is 40-feet long, equaling two TEUs. Today, ships such as the CMA CGM Benjamin Franklin and MSC MAYA can carry 18,000 and 19,224 TEUs, respectively. There are already 20 such megaships on the high seas with a capacity of more than 18,000 TEUs, and another 52 are on order.

With the imminent opening of the expanded Panama Canal, commercial vessels of enormous proportions—in terms of length, width and depth—are already, or will soon be, plying waters around the world that have never before witnessed such vessels, or so many of them. From a commercial and economic perspective, this bodes well for maritime trade, as economies of scale should see transportation costs per unit of cargo reduce.

However, alongside this euphoria of new, wider waterways and larger vessels comes a plea to governments to invest more in the funding and the performance of systematic hydrographic surveys of national waters, and to collaborate with other nations to perform far more extensive bathymetric surveys of international waters, beyond their immediate areas of responsibility.

Since January 2016, the International Maritime Organization (IMO) has been granted powers to audit the performance of countries in the way they are fulfilling their safety of life at sea (SOLAS) obligations to provide safe passageways for vessels; however, the IMO has no enforcement power.

Commercial vessel operators should also be encouraged to share the bathymetric data their vessels collect, as a matter of course, with international bodies to ensure safe passageways for increasingly larger vessels. We understand this is not always the case.

Today, accurate bathymetric data is inadequate or nonexistent in large tracts of the world’s oceans and seas. Large areas are either unsurveyed or have not been rechecked since old lead-line soundings, measured in fathoms, were taken nearly a century ago, when vessels literally “plumbed the depths.” It is critical that governments and ports seeking the business of these megaships provide accurate bathymetric data to modern standards, where necessary, to ensure safe and navigable waterways.

While bathymetric and hydrographic survey work is seeking to provide more accurate information, the task is huge and the oceans are vast. The bathymetric data collected by commercial vessels as a routine part of their navigation is sometimes viewed as “intellectual property” by shipping lines and is not always shared for the safety of all. International bodies such as the IMO have no power to force governments to prioritize this work, nor can they exert pressure on shipping lines to share their data; however, with these megaships entering new waters, there needs to be more urgency demonstrated by some governments (both local and national) to ensure safer navigation and a more collaborative attitude among ship operators.

Nations need to accept a greater responsibility to survey international waters beyond their own national territories, which, although often remote, are not necessarily always deep, with many deceptive and often unexpected shallows.

Navigation routes, such as those leading to or from the Panama Canal, have been the same for many years, with commercial cargo vessels following tried-and-tested pathways through the sea; however, the known safe depth for the navigation of many is only as good as the draught of the largest, deepest vessel ever to have used it. An extra four meters of depth that the newest megaships can draw could be the vital difference between uneventful navigation and a serious grounding or stranding, with all the perils of ship damage, crew endangerment, cargo loss and marine pollution that could result.

As container ships are the largest users of both the Suez and Panama Canal systems, these are the vessels that, having the ability and commercial reasons to navigate new parts of the world’s oceans, are of most concern. Governments seeking to have large vessels use their ports and terminals will often be the first to blame the shipping industry when a serious grounding or stranding accident occurs in their waters. But how much of that blame should actually lay at a government’s own doorstep, when it comes to ensuring hydrographic surveys meet modern standards (and, where necessary, the funding to do so), especially when it is known that increasingly larger vessels will be using their waters?

Let us not forget that the attempted—and ultimately unsuccessful—salvage of the MV Rena after it grounded on Astrolabe Reef in New Zealand in October 2011 resulted in one of the largest-ever protection and indemnity losses to the market. And the Rena was a very small container ship in comparison to the modern generation.

Many vessel operators have been viewing, with great interest, the increasingly viable Arctic routes between Asia and Europe as an alternative to the much longer (both in time and distance) routes via Singapore and the Suez Canal; however, the vessels that have, to date, successfully transited the Northern Sea Route (NSR) around northern Russia have been relatively small in size. Marsh has already voiced concerns about the potential risks of larger vessels using this route with greater frequency, but the knowledge that so few of the waters have been adequately surveyed for depth to modern standards adds to those concerns.

In addition, there is increasing talk of commercial use of the Northwest Passage (NWP) around northern Alaska and through the many islands of northern Canada, which still poses considerable risk, as some of the waters are even less bathymetrically assured than parts of the NSR. Only a handful of commercial vessels have ever successfully transited the NWP, yet some operators are already heralding those few successes to prove the NWP to be a major route for the future. The lack of hydrographic data for that whole region should remain a major concern for any sensible operator, echoed by similar warnings in the new Polar Code.

In light of all these factors, governments and ports seeking megaship business need to provide accurate bathymetric data to modern standards wherever necessary to ensure safe and navigable waterways for modern vessels to use.