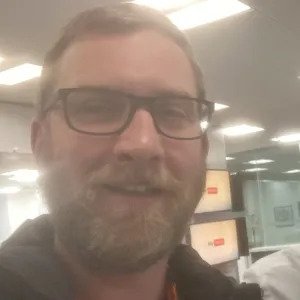 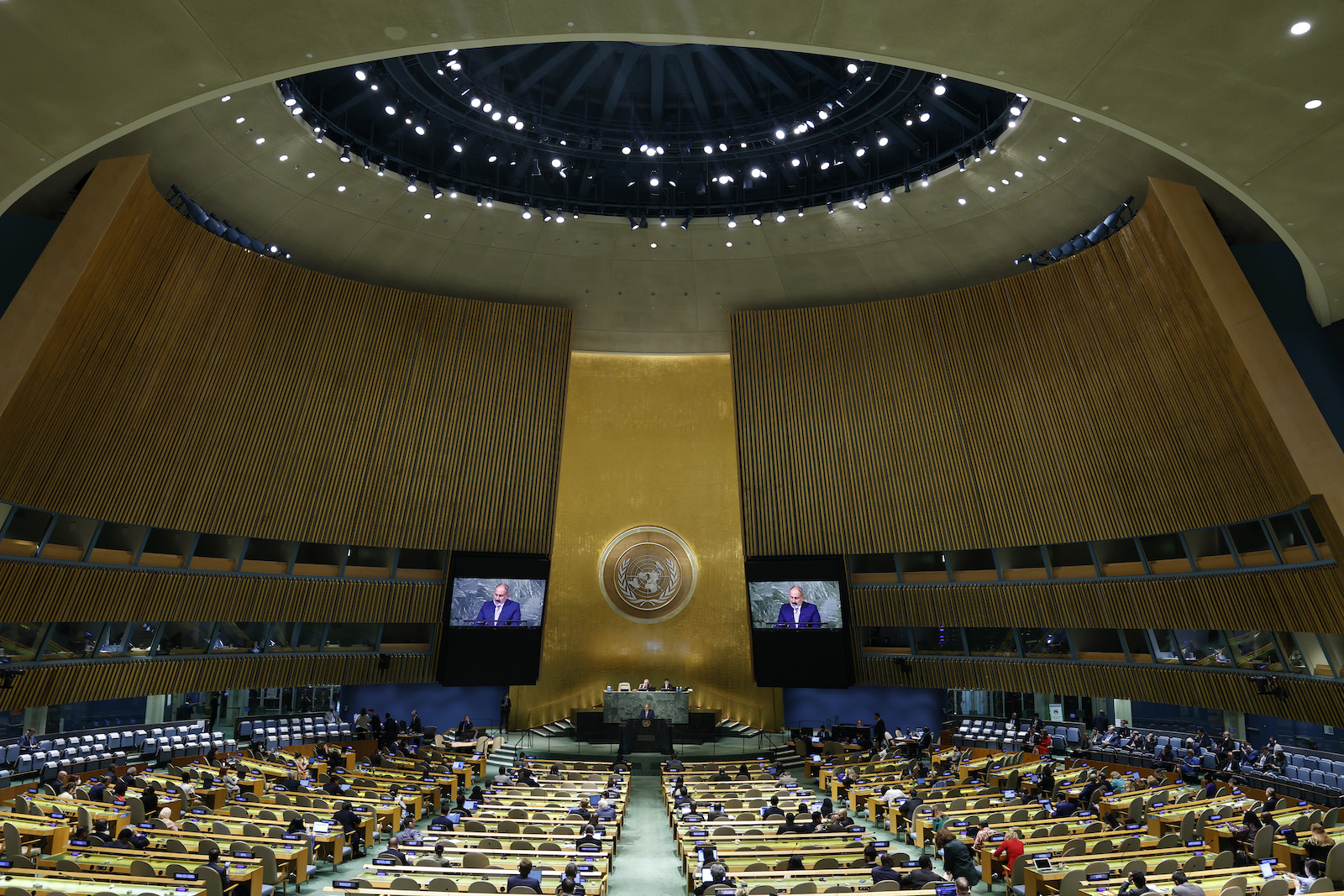 The 2030 Agenda for Sustainable Development was adopted by all United Nations’ member states in 2015. It provides “a shared blueprint for peace and prosperity for people and the planet, now and into the future.” It’s based on 17 Sustainable Development Goals (SDGs) which the U.N. describes as an urgent call for action. It says that ending global poverty must focus on strategies that reduce inequality and spur economic growth, while also tackling climate change.

However, the Sustainable Development Goals Report 2022 paints a worrying picture of progress in almost all areas. It says that “cascading and interlinked crises are putting the 2030 Agenda for Sustainable Development in grave danger, along with humanity’s very own survival.” The impact of COVID-19, climate change and armed conflicts are affecting all the SDGs, the report says, adding that, despite signs of progress in some areas, everything from food, nutrition, health, education and the environment are being impacted.

What’s more, the cost of meeting the targets to fight such issues rose 25% to $176 trillion over the past year, reports Reuters, with performance on several measures reversing.

Here’s a breakdown of where each of the goals stands.

The report says four years of progress reducing poverty has been erased by the COVID-19 pandemic. Rising inflation and the war in Ukraine have caused further setbacks. It’s estimated that as many as 676 million people are living in extreme poverty worldwide, almost 100 million more than the pre-pandemic projection. The U.N. says unprecedented levels of “pro-poor growth” are needed to achieve the goal of ending poverty by 2030. 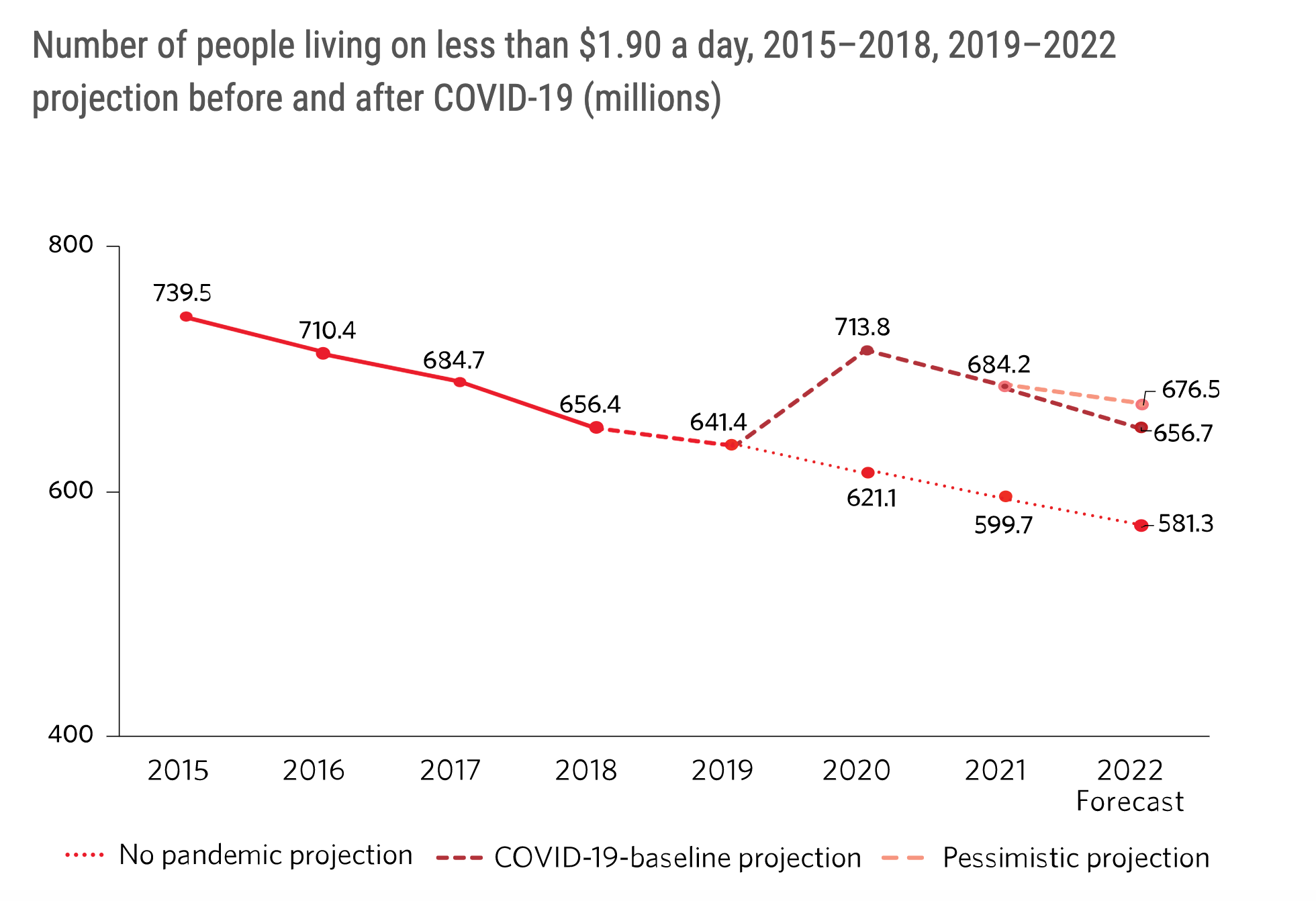 The U.N. estimates as many as 828 million people may have suffered hunger in 2021. The Ukraine crisis has caused dangerous food shortages for the world’s poorest people. The report says the international community must act now to avert a crippling food emergency and the social, economic and political upheaval that could follow.

COVID-19 is threatening decades of progress on global health. By mid-2022, half a billion people had been infected worldwide. Consequent widespread disruption to health systems has also derailed progress against preventable diseases such as HIV, TB and malaria. The report says urgent and concerted action is needed to achieve goal 3. 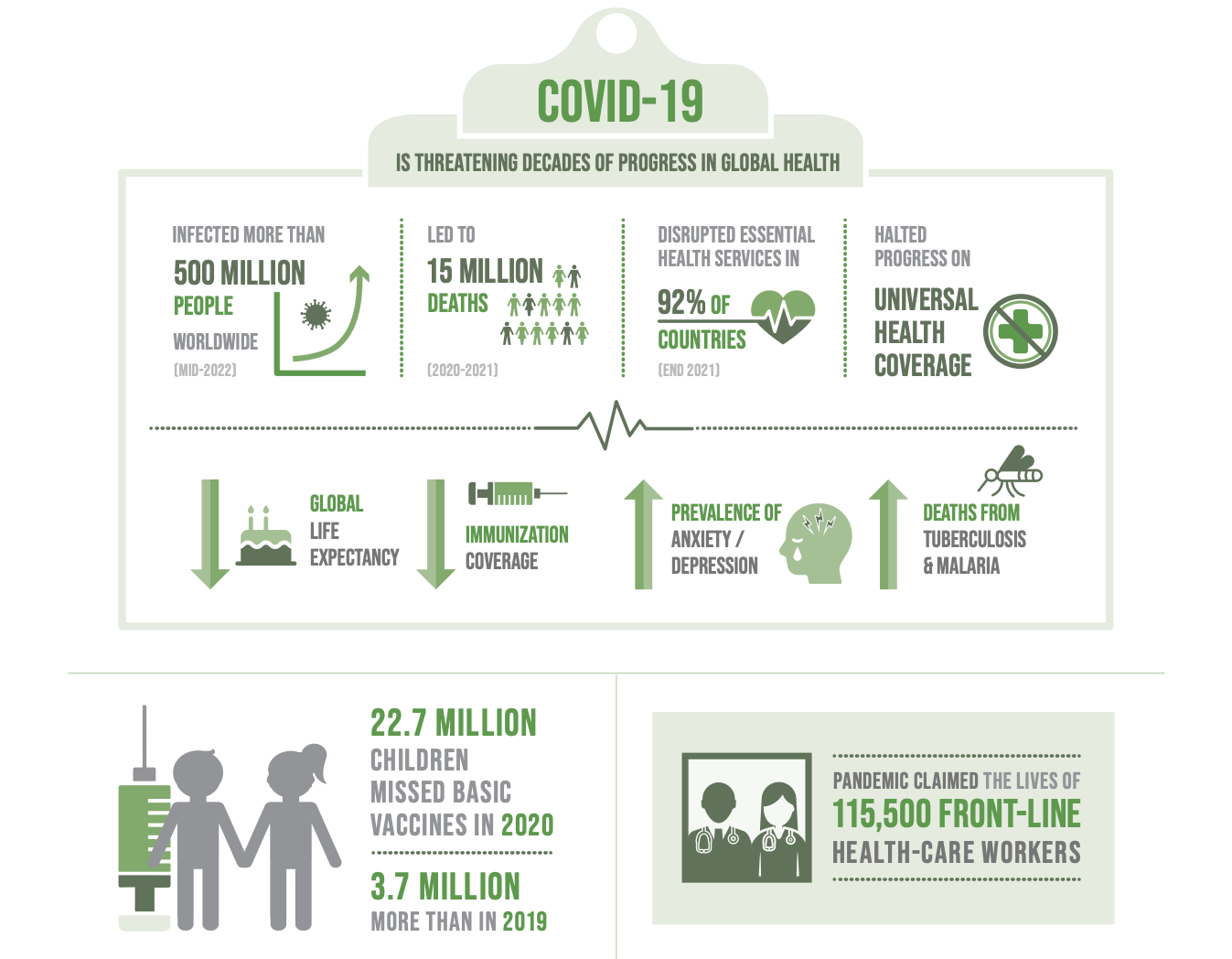 The pandemic has caused severe disruption to education systems. An estimated 147 million children missed over half of in-person teaching in 2020 and 2021. As a result, this generation of children could lose $17 trillion in lifetime earnings. The U.N. says governments must implement ambitious programs to recover learning losses.

The U.N. says the world is not on track to achieve gender equality by 2030. Progress in areas like unpaid care and domestic work and reproductive health is falling behind. Violence against women remains endemic. Bold action is needed to accelerate progress through the promotion of laws, policies, budgets and institutions that promote gender equality.

Demand for water is rising due to rapid population growth and increasing pressure from agriculture and industry. Decades of poor management have increased water stress. At current rates, by 2030, 1.6 billion people will lack safe drinking water and 2.8 million people will be without adequate sanitation. More efforts are needed to provide these and to increase cooperation among states across transboundary waters.

A projected 679 million people will still be without electricity in 2030 at current rates. Slow progress towards clean cooking solutions means the health of 2.4 billion people is also at risk. Achieving energy as well as climate goals will mean a massive mobilization of public and private capital in renewable energy, especially in developing countries. 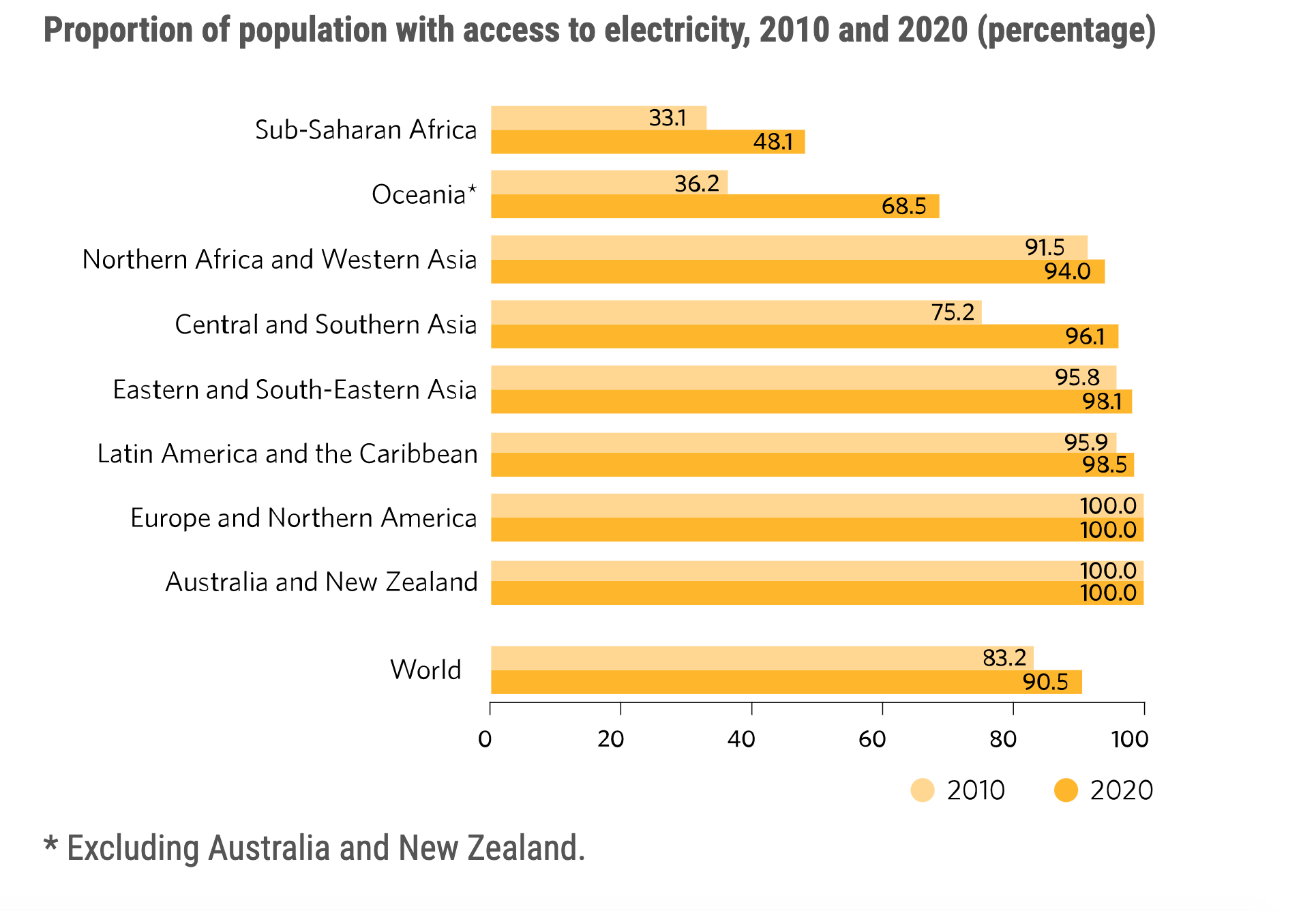 Global economic revival is being hampered by new waves of COVID-19, rising inflation, supply chain disruptions, and the conflict in Ukraine. Global unemployment is predicted to remain above pre-pandemic levels until at least 2023. Ten percent of children are still engaged in child labor worldwide. Young people, women and people with disabilities will be the last to recover from the economic crisis, according to the report.

Global manufacturing production grew by 7.2% in 2021, surpassing its pre-pandemic level. But recovery remains uneven with high-income countries benefiting from massive state help and successful vaccine rollouts. The report says countries with strong infrastructure including internet connectivity are recovering more quickly. Despite the presence of 3G (or higher) broadband in most countries, the cost of devices and lack of literacy and digital skills remain steep barriers to internet adoption. 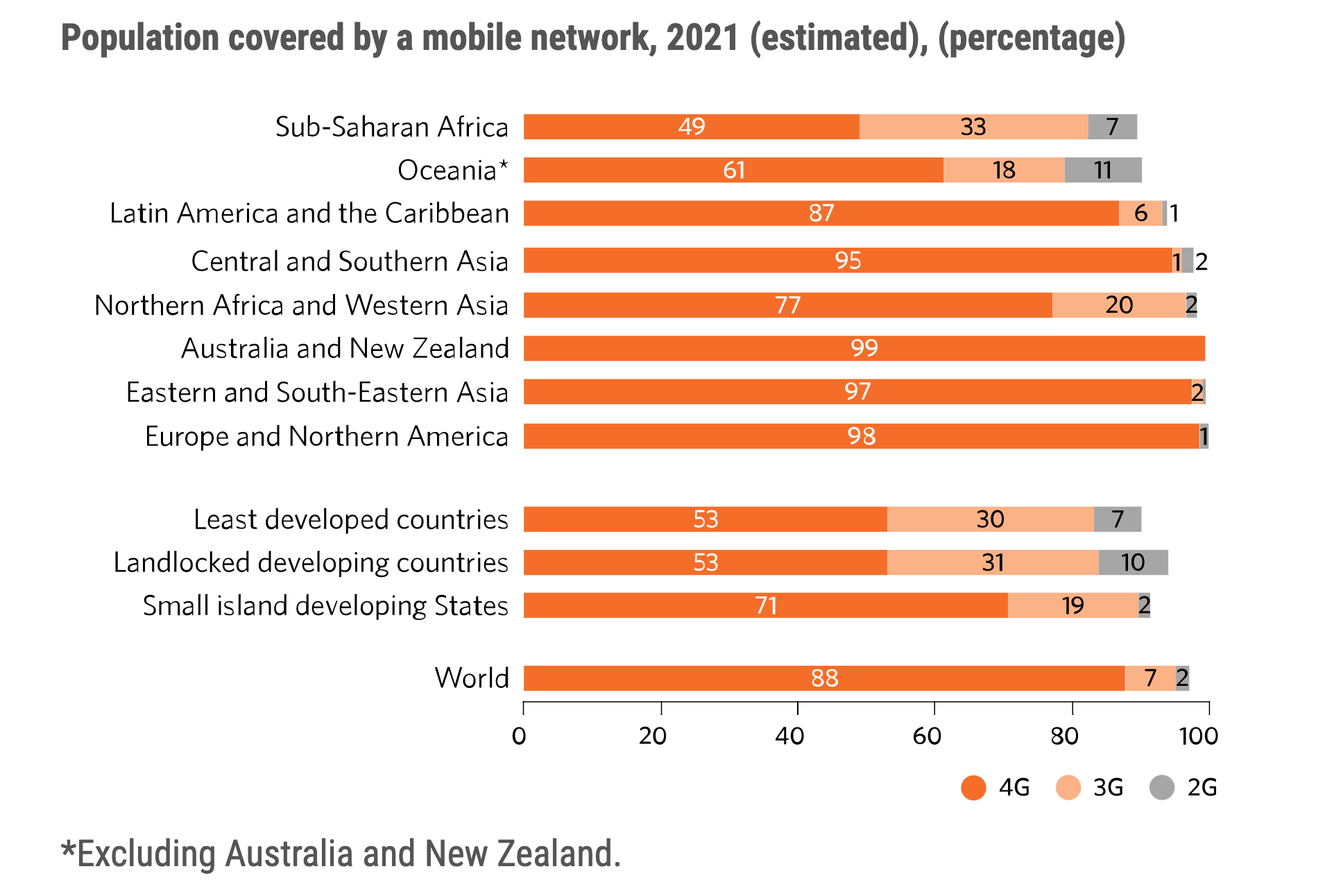 Before COVID-19, income inequality was narrowing worldwide. But the report says the effects of the pandemic are reversing any positive trends. The pandemic has also intensified structural and systematic discrimination. The number of refugees globally reached the highest absolute number on record in 2021. The war in Ukraine has created a new major refugee crisis.

Today, more than half the world’s population live in cities. Around one in four of them live in slums or informal settlements. But 99% of the world’s urban population breathe polluted air, resulting in 4.2 million premature deaths in 2019. However, more than 6,000 cities in 117 countries are now monitoring air quality, double the number since 2015. The report says significant investment is also needed in the development of waste management infrastructure, especially in low- to middle-income countries.

A growing reliance on natural resources has set the Earth on an unsustainable course. This is causing the triple planetary crises of climate change, biodiversity loss and pollution. The U.N. says transforming our relationship with nature is key to a sustainable future. It calls on governments and citizens to work together to reduce waste and pollution and shape a new circular economy.

The world is on the brink of a climate catastrophe and the window to avert it is closing rapidly. To limit warming to 1.5 Celsius, global greenhouse gas emissions must decline by 43% by 2030. However, under current global net-zero commitments, emissions are still projected to increase by almost 14% over the next decade. Therefore immediate and deep reductions are needed to meet obligations agreed upon in the Paris Agreement. 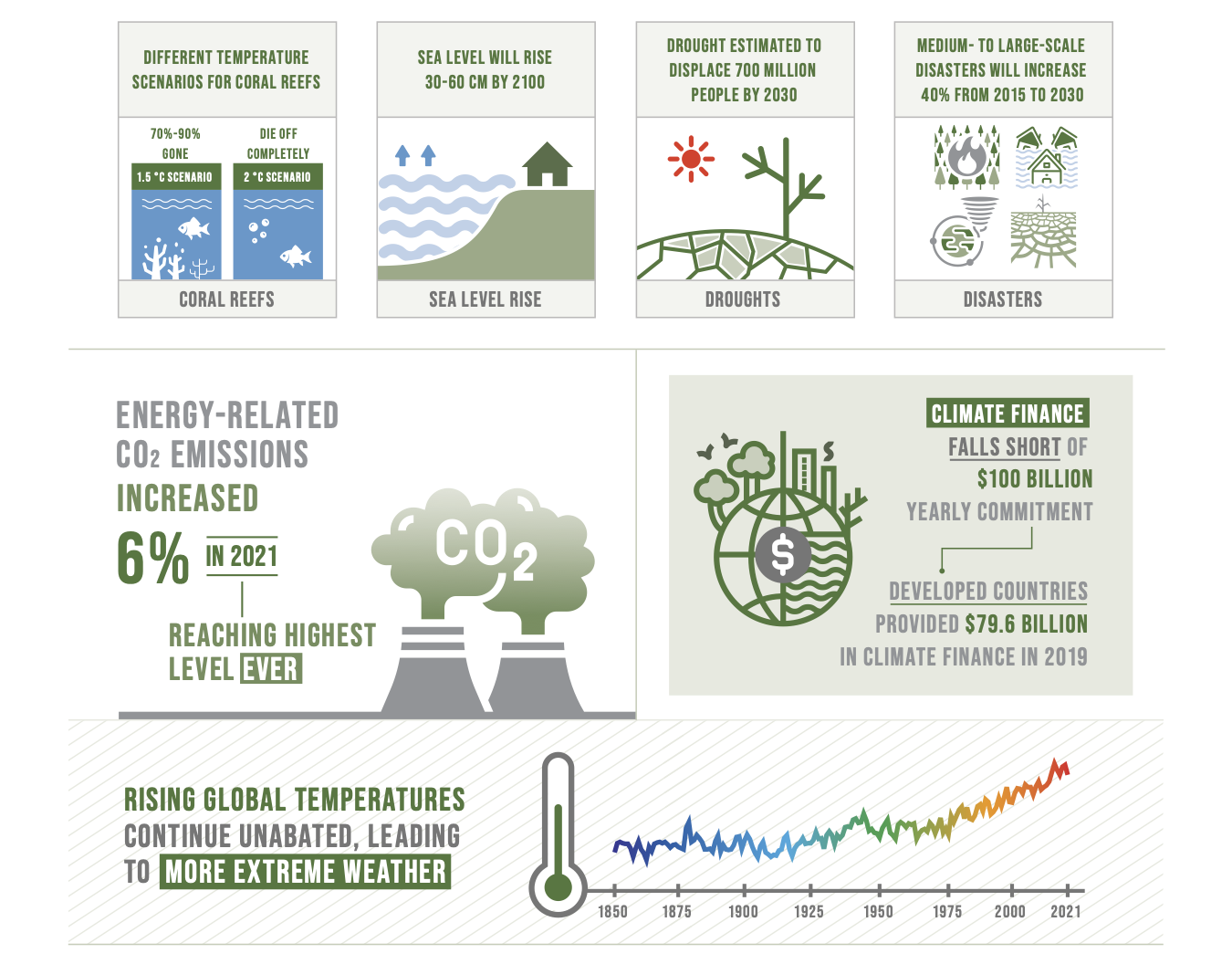 Continuing ocean acidification and rising sea temperatures are threatening marine ecosystems. Between 2009 and 2018 the world lost about 14% of its coral reefs which support an extraordinary range of biodiversity. More than 17 million metric tons of plastic entered the ocean in 2021, threatening marine life. The report says combatting the decline in ocean health requires intensified protection efforts and sustainable solutions.

Around 40,000 species are at risk of extinction over the coming decades, while 10 million hectares of forest are destroyed every year and more than half of key biodiversity areas remain unprotected, the report says. Many countries are sustainably managing their forests and enacting national conservation legislation and policies. However, the report points out that biodiversity has been largely neglected in pandemic-recovery plans. 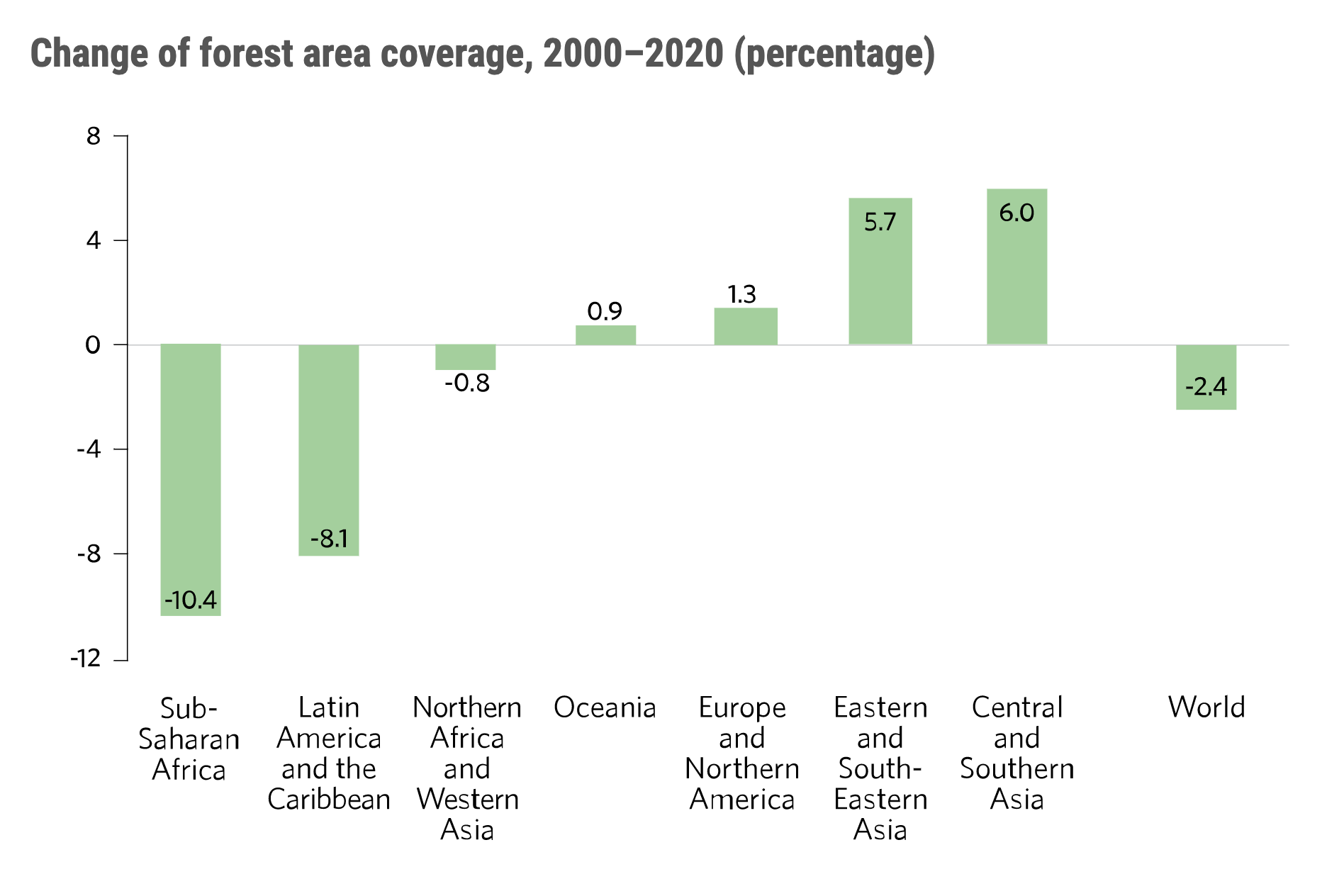 A quarter of the global population lived in conflict-affected countries in 2020. As of May 2022, a record 100 million people had been forcibly displaced worldwide. There were 320 fatal attacks against human rights activists, journalists and trade unionists in 35 countries in 2021. The U.N. says ending armed conflicts, strengthening institutions and enacting human rights legislation are all necessary preconditions for sustainable development.

17. Partnerships for the Goals

With record inflation, rising interest rates and growing debt burdens, many developing countries are finding it harder than ever to thrive economically. The report says in order to build back better from the pandemic and rescue the SDGs, a full-scale transformation of the international financial and debt architecture is required. It says to find lasting solutions, international cooperation must be urgently scaled up.

Making concrete progress on the SDGs is a key component of the World Economic Forum’s Sustainable Development Impact Meetings which are taking place between 19 and 23 September 2022. The meetings will bring together business leaders, policy-makers and international civil society organizations and aim to build momentum on other key upcoming milestones such as COP27 and the Forum’s annual meeting in January 2023.

Stefan Ellerbeck is a highly experienced media professional who has recently transitioned into the world of digital marketing and communications. He has more than 25 years of experience as a senior journalist working at some of the world’s leading news organizations at home and abroad.

Xianbin Yao Professorial Lecturer of International Studies at De LaSalle University Manila
URL: https://www.brinknews.com/how-much-progress-is-being-made-on-the-uns-sustainable-development-goals/
Get ahead in a rapidly changing world. Sign up for our daily newsletter. Subscribe
​​