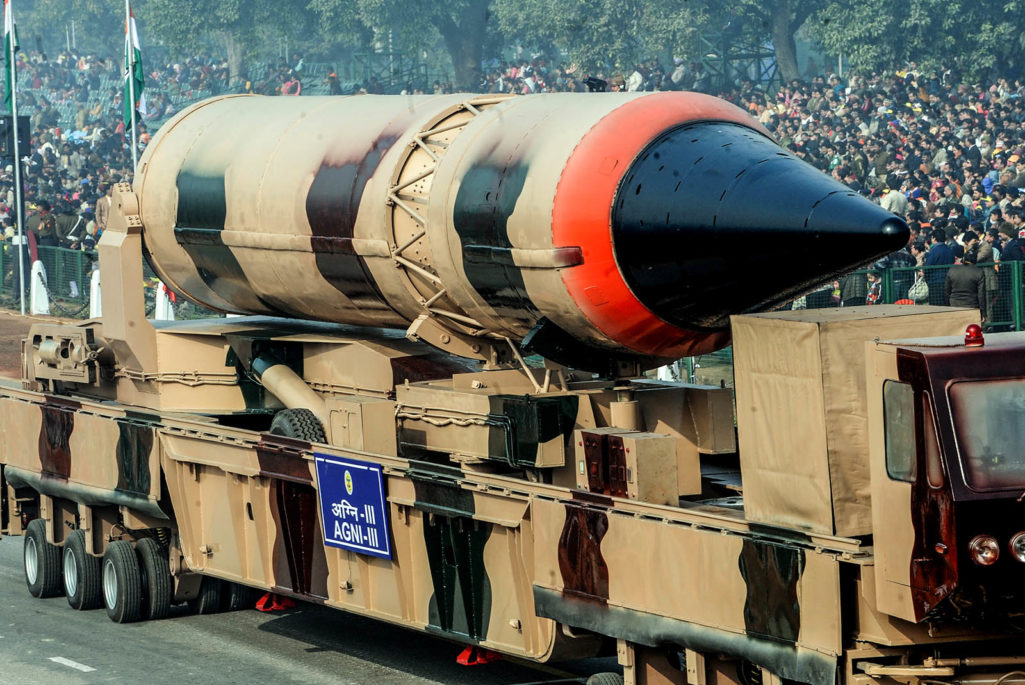 India's nuclear-capable Agni III missile rolls past onlookers during the final full dress rehearsal for the Indian Republic Day parade in New Delhi on January 23, 2010. The parade is held annually in celebration of the country’s military preparedness.

India has taken a step closer to developing a thermonuclear device—a hydrogen bomb—increasing geopolitical risk throughout the region, according to a recent report.

India’s thermonuclear development program, if that is indeed what it is, has revived the specter of an arms race in the region once again while simultaneously raising the stakes in what is arguably the world’s most dangerous region.

There were, nevertheless, two main outcomes of these tests. The international community, led by the United States, was almost unanimous in condemning the tests and, subsequently, imposed a range of sanctions on India. Defending his administration’s actions in carrying out the tests, then Prime Minister Atal Bihari Vajpayee referred to China’s armed aggression against India in 1962 in a letter to then U.S. President Bill Clinton. The second outcome, arguably, had greater strategic consequences. K. Santhanam, the senior scientist who claimed the thermonuclear explosion had failed, suggested that India ought not to rush into signing the Comprehensive Nuclear Test-Ban Treaty. These two motivators, when viewed together, offer an explanation for India’s reluctance to become a signatory to the Nuclear Non-Proliferation Treaty and its threat perceptions in regard to China.

India and China fought a brief border war in 1962. The war, which India lost, seared itself into the Indian psyche, leaving a memory that it has not been able to put to rest. The matter was compounded when, in 1971, India and Pakistan went to war once again. India defeated Pakistan, which led to the creation of Bangladesh and removed the threat of a Pakistani attack on two fronts. The magnitude of the defeat was sufficient to have the Indian Field Marshal, Sam Manekshaw, suggest to Prime Minister Indira Gandhi that India ought to invade West Pakistan as well and put an end to the Pakistani threat once and for all. Washington, however, learned of this and stationed the USS Enterprise in the Bay of Bengal to indicate to New Delhi that they could go so far but no further. China also indicated that it could come to the assistance of Pakistan, should India invade.

India has progressively developed its nuclear technology as well as its delivery systems after early nuclear tests.

India learned from that lesson. Here were two nuclear powers (China had tested a nuclear device in 1964 at Lop Nor and a thermonuclear device in 1967) threatening India and New Delhi was unable to do anything about it. The stage was set; India had to carry out its own nuclear tests.

After its 1974 and 1998 nuclear tests, India progressively developed its nuclear technology as well as its delivery systems. Each technological milestone accomplished since the 1998 tests has been greeted in terms of its effect on China. For example, when India tested its Agni-V IRBM system, it was reported as a “China Killer.” Nevertheless, what India lacked was a nuclear device, a “city buster,” to match China’s. These devices, it was reasoned, could provide India with not only a guaranteed deterrent against Chinese—or, for that matter, Pakistani—aggression, but would further its claim for a seat on the United Nations Security Council, where it could, in a different context, also challenge China.

The report that India is building what is meant to be South Asia’s largest military-nuclear complex—it is expected to be about twenty square miles in size—comes as little surprise. If anything, it raises questions as to why it has taken India so long to start on this project. For that answer, we need to look to Washington.

Political and strategic analysts in Washington have long been aware of the need to form a loose coalition in the Asia-Pacific (more recently termed the Indo-Pacific) region to balance China’s growing assertiveness. However, the U.S. cannot, by itself, attempt to do so for political and economic reasons. At a time when President Obama is looking to burnish his legacy, the last thing he wants or needs is heightened tensions with China to add to his present worries about Saudi Arabia, Syria, Turkey, Iran, Crimea, Russia and Ukraine. The White House needs more coalition partners, no matter how loosely tied together, to balance China and India would fill that role.

India’s growing economy, its vibrant (albeit complicated) democracy and political clout make it an ideal partner for the U.S. It could, moreover, prove to be the world’s next big market place.

India has made it plain that it will not enter into any kind of coalition to balance China, but has also turned increasingly to the U.S. for arms and military technology and to sell its information technology services. It now ranks second only to Saudi Arabia as one of the U.S.’s main purchasers of military technology. Boeing has offered to build its F-18 fighter aircraft there. India is discussing purchasing armed U.S.-made Predator Avenger drones; meanwhile, India and the U.S. are discussing the transfer of aircraft carrier technology and so on.

Arguably more important, U.S. Defense Secretary Ashton Carter was recently in New Delhi to sign an agreement with his Indian counterpart, Manohar Parrikar, giving both countries access to each other’s military facilities for resupplying and logistical purposes. This by itself could indicate India’s move away from its long-standing position of non-alignment, a leftover from the Cold War era, to one in which, despite its strategic ties with Russia, it is growing increasingly closer and more comfortable in dealing with the U.S.

Given its current domestic political situation, and its travails in East and Southeast Asia, Washington isn’t likely to derail the growing Indo-U.S. relationship because New Delhi could now develop thermonuclear capability. New Delhi, for its part, will undoubtedly wish to increase its stake as a U.S. partner and purchaser of its technology so as to make it very difficult, if not altogether impossible, for Washington to impose sanctions on it again should it conduct another nuclear test and if that means moving closer to the U.S., so be it. Should India conduct another nuclear test, a future U.S. president may feel obliged to go through the motions of sanctioning India, but this would likely be a mere formality and the business of arms sales will continue.

The danger lies in the obvious nuclear arms race that could engulf South Asia. Pakistan would undoubtedly approach China for thermonuclear technology, and will probably receive it, since China will continue to use Pakistan as a proxy to contain India while its attention is focused on events in the South China Sea and a possible confrontation with the U.S. and Japan. There is no guarantee, however, that a rogue Pakistani Army General would not take it on himself to launch an attack on India, or that terrorists in Pakistan would not acquire control of these devices.

Similarly, there is no guarantee that, should such an attack take place, an Indian submarine commander will not launch missiles with thermonuclear warheads at China from the Pacific Ocean because he sees China as having instigated the attack. India is currently constructing its second nuclear-powered submarine, the INS Aridhaman, with a third (named the S-3 for now) in the pipeline and a fourth (the S-4) allegedly sanctioned to be built. These submarines will likely be equipped with India’s K-4 nuclear-capable missiles, which are undergoing testing. Such assets only raise the risk of thermonuclear confrontation.

Chris Miller Associate Professor at the Fletcher School at Tufts University
URL: https://www.brinknews.com/india-seeking-to-upgrade-nuclear-capability-increasing-regions-strategic-risk/
Get ahead in a rapidly changing world. Sign up for our daily newsletter. Subscribe
​​