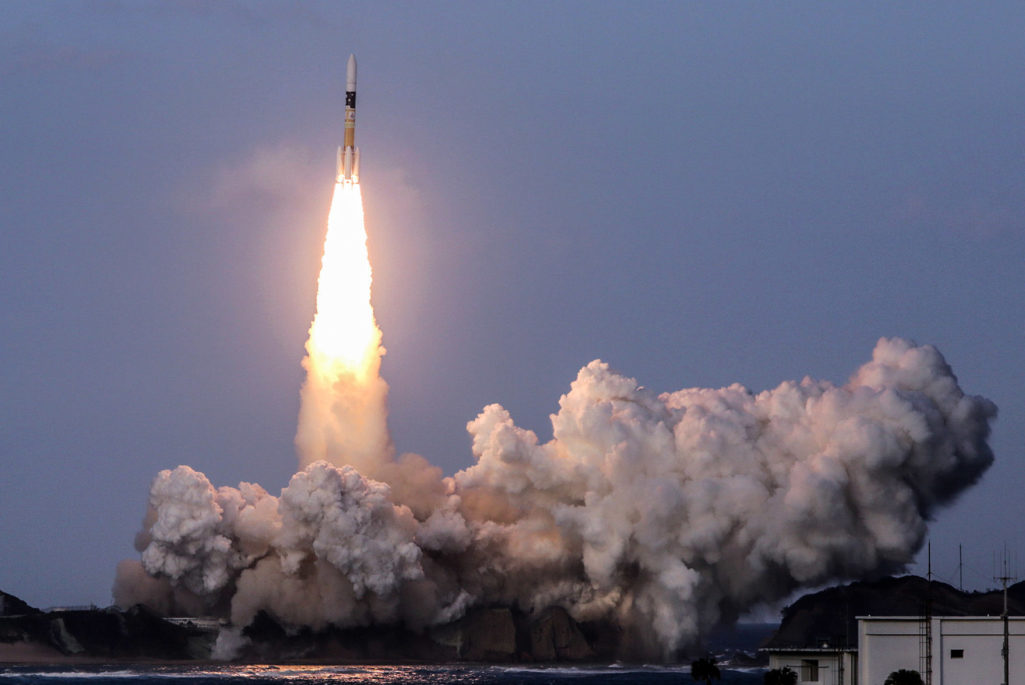 A series of political moves and statements by Japanese government officials have given rise to the idea that the country has a nuclear ‘bomb in the basement’—the means and material to produce a weapon within six months. Coupled with strong space and rocket programs, like the H-2A rocket shown here, Japan could create a military-focused nuclear program.

[This is the debut of BRINK’s GeoWatch column, a bi-monthly feature.]

Japan is rattling a nuclear sword of innuendo through a series of calculated political moves, signalling that its path to a nuclear bomb may be more forthright than its allies and enemies want to believe.

It was recently reported that the United States had dispatched two ships used to transport nuclear material, the Pacific Heron and Pacific Egret, to Japan to bring back an estimated 330 kilograms of plutonium. France, the UK and the U.S. supplied this material to Japan, ostensibly for research purposes. The plutonium is being transferred before a scheduled nuclear security summit to be held in Washington, D.C. It had been a source of contention internationally since 2006 when Japan’s the Foreign Minister at the time, Taro Aso, told a parliamentary committee on security issues that “Japan is capable of producing nuclear weapons, but we are not saying we have plans to possess nuclear weapons.”

While Aso’s comment was almost certainly made in regard to North Korea’s nuclear tests, regional governments made use of the opportunity Aso’s remark presented to voice their disquiet.

The disquiet some of Japan’s neighbors felt could have been predicated on a 2010 finding by a Japanese government-appointed panel that previous administrations had lied to the Japanese public about nuclear weapons being stored in the country. It confirmed the existence of secret Cold War-era agreements allowing the U.S. to import nuclear weapons into Japan, in violation of its non-nuclear policies. Those neighbors would undoubtedly have been even more disturbed had they known that the Pentagon’s Joint Chiefs of Staff had considered giving Japan’s Self-Defense Forces atomic weapons in the 1950s under an arrangement similar to NATO’s nuclear-sharing agreement.

Ironically, tensions between China and the U.S. in the Taiwan Strait in 1954 led to nuclear weapons stored on Okinawa. Their numbers grew to an estimated 1,200 by 1967, but all had been removed by the time that control of Okinawa was handed back to Japan in May 1972. The Pentagon, however, retained the non-nuclear components of these weapons in other bases in Japan in the hope that nuclear weapons could be deployed there once again. When China carried out its first nuclear test in 1964, Japan’s Prime Minister Eisaku Sato remarked to U.S. Ambassador Edwin Reischauer that Japan should also develop nuclear weapons.

With its strong space and rocket programs, Japan could create a military-focused nuclear program, if warranted.

Japan has put in place various pieces of legislative constraints on acquiring nuclear weapons. For instance, the Basic Law on Atomic Energy, which was enacted in 1955, stipulates that any research and use of nuclear energy must be restricted to peaceful uses. In June 2012, however, Japan’s Diet amended the Basic Law by inserting the phrase “national security,” thus indicating that national security could also be an element of the use of nuclear power. This led to the almost immediate criticism that Japan could now use nuclear technology for military purposes.

There is some validity to this criticism. In contrast to general opinion, there is no true constitutional prohibition of nuclear weapons. The famous Article 9 of the Japanese Constitution casts aside war as a “sovereign right of the nation and the threat or use of force as means of settling international disputes.” This Article has been amended over time to suit contemporary factors. In the aftermath of the Korean War, Clause 2 of Article 9, which states that “land, sea and air forces, as well as other war potential, will never be maintained” was reinterpreted so as to permit a “military capability that does not exceed the minimum necessary level for self-defense.” This gave rise to Japan’s Self-Defense Forces. Taken to its logical conclusion, however, that interpretation implies that nuclear weapons could also be permissible, provided they remained within that minimum necessary level. Interestingly, Prime Minister Abe used this interpretation during his first administration in 2006 to acquire a military in place of the Self-Defense Forces.

Japan has shed many of the constraints imposed upon its defense policies. In 1992, for instance, a ban on its troops abroad was lifted to enable the Self-Defense Force to send armed troops to Iraq. In 2001, in-flight tanker-aircraft and helicopter carriers (the latter, for all intents and purposes, aircraft carriers) were procured, thus effectively nullifying a ban on power projection. In 2003, Tokyo announced that it would explore ballistic missile defense systems with Washington, negating a ban on joint military research, and in 2014, announced that it would supply missile interceptor componentry to the U.S. and UK, thus ending its self-imposed ban on arms exports. It is currently in the process of bidding to export its Soryu-class submarines to Australia. As former South Korean ambassador to Japan Kwon Chulhyun concluded in 2012, Japan was “getting rid of the obstacles one by one as the opportunity offers. In the long term, I guess it is preparing for a nuclear weapon.”

Since Abe became Prime Minister for the second time in December 2012, Japan’s military evolution has grown faster. Even before his second tenure, however, statements were made in regard to Japan’s nuclear stance. Soon after the Fukushima disaster in 2011, when many Japanese questioned the safety of nuclear power stations, the former Defense Minister Shigeru Ishiba said, “We should keep [the] nuclear fuel cycle, which is backed by ‘enrichment and reprocessing’ in order to maintain ‘technical deterrence.’” Similarly, just prior to being appointed to the post of Defense Minister in 2012, Satoshi Morimoto said that commercial nuclear power reactors have “very great defensive deterrent functions.”

Such hedging has given rise to the idea of Japan’s bomb in the basement. Coupled with strong space and rocket-launch programs, Japan could easily create a military-focused nuclear program if it felt that was warranted.

Conventional wisdom has it that Japan would be committing a grave mistake if it were to develop nuclear weapons. This is undoubtedly true. China would probably lead the regional and international charge to impose political, diplomatic, military and economic sanctions on Japan—and no doubt without the slightest trace of irony. Arguably, the greater danger to any such overt move by Japan would arise from sanctions that Washington would bring to bear on it. Japan’s continued reliance on the extended deterrence of the U.S. nuclear umbrella depends completely on its (Japan’s) perceptions of whether Washington has the political will to convert the threat its nuclear weapons pose into action should Japan be attacked by, say, China, Russia or North Korea. Given the U.S.’s increasing vulnerability to Chinese nuclear weapons and Washington’s seeming political inability to effectively counter China’s activities in the South China Sea, Tokyo has every reason to question U.S. ability or determination to ensure its security.

Any Japanese move toward creating a nuclear deterrent could, however, see the U.S. withdraw from any defense agreement with Tokyo and impose economic and other sanctions on it. This could partly be because Washington could see its own influence in East Asia being reduced. It would be easier to coerce Japan into foregoing any nuclear deterrent than it would be to pressure China into withdrawing the threat it used to provoke Japan into creating the deterrent in the first place. There could come a time, nevertheless, when Japan saw itself at an existential risk and with no real guarantee of support from its allies. In such a case, sanctions or no sanctions, it would undoubtedly develop nuclear weapons. It behooves Washington, therefore, to take such steps as Tokyo feels are required to ensure that Japan feels its security is guaranteed inasmuch as it can be. Failure to do so could see the start of a nuclear race between China and Japan that would probably draw in the other two nascent regional nuclear powers—South Korea and Taiwan—both of whom could also lose faith in the U.S.’s extended deterrence model.

Washington must act decisively and forcefully to prevent such an outcome by countering (and being seen to be effectively countering) China in the South and East China Seas. Any less could lead to a far worse scenario.

Brink Editorial Staff
URL: https://www.brinknews.com/japan-inching-toward-nuclear-war-footing-and-washingtons-need-to-be-decisive/
Get ahead in a rapidly changing world. Sign up for our daily newsletter. Subscribe
​​