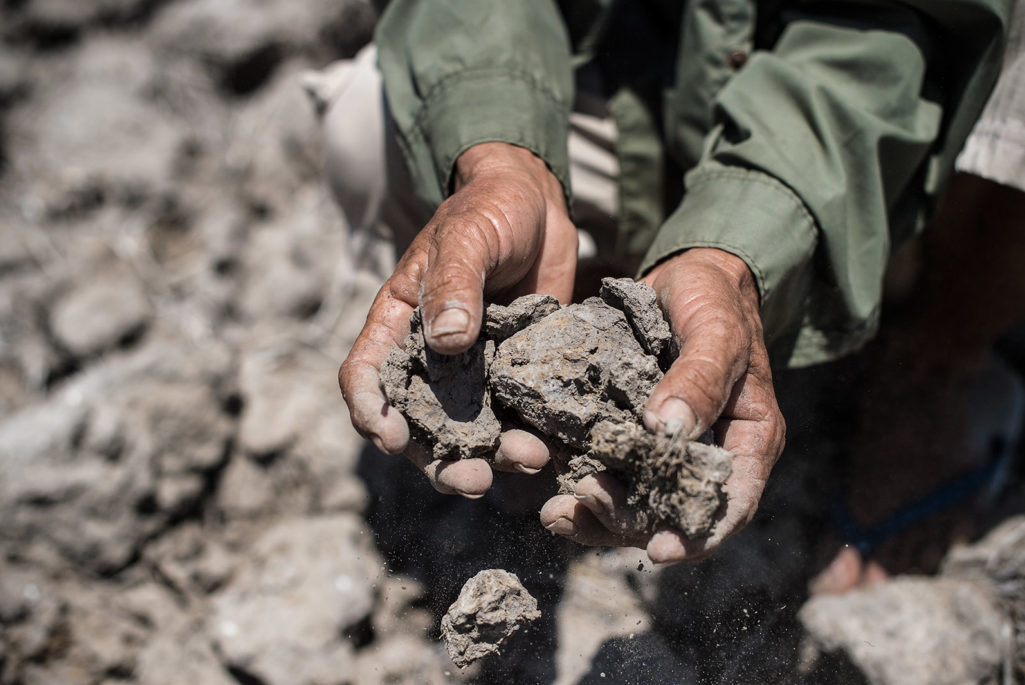 A Thai farmer shows the dried out soil from his field which usually yields a crop, in Bang Pla Ma district, Suphanburi province. Thailand's vital rice belt is being battered by one of the worst droughts in living memory, forcing impoverished farmers deeper into debt and heaping fresh pain on an already weak economy.

The Pentagon calls it a threat multiplier. Among some academics, it’s a stressor. In 2011, millions of Egyptians and Syrians knew it as hunger.

By any name, climate change is contributing not just to melting ice caps and rising sea levels, but also to drought, food shortages and, ultimately, to global instability. Indeed, climate change sparked deadly food riots in 23 countries around the world between 2007 and 2012. Ultimately, it even triggered what has become known as the Arab Spring when Russia, fearing domestic food riots, cut off wheat exports.

Humanity’s future hinges on our ability to feed a growing and increasingly wealthy and urban population in the face of more variable and extreme weather conditions. Everyone has a role to play—and a responsibility to take action now.

Food production affects climate change, and climate change affects food production. Converting forests and other natural habitats to produce food releases carbon into the atmosphere and the land that’s left does a poorer job reabsorbing it. And as we have seen in California, climate change is driving weather events that make producing food more difficult and expensive. Droughts are particularly problematic, as 70 percent of the world’s fresh water consumed by humans is currently used to produce food.

Today 7.3 billion people use 1.5 times what the Earth’s natural resources can supply. By 2050, the world’s population will exceed 9 billion and the demand for food will roughly double. To meet that demand, we must double net food availability by 2050; climate change will make this task more difficult.

No Blueprint for Resolution of Food Insecurity

There is no silver bullet solution. We need to work simultaneously on productivity and efficiency on the one hand and waste and consumption on the other. We must produce each calorie with fewer inputs (land, water, energy, fertilizer, pesticides), less pollution (runoff and green house gas emissions), and less waste. To the last point, we waste one in three calories globally or about 1.3 billion tons of food each year—four times the amount needed to feed the more than 800 million people who are malnourished and about half of all the additional food that we will need to for everyone by 2050.

Climate change means crop change. Producers will not be able to grow the same crops their ancestors did. In the short term, say 3 to 5 years, producers will focus on increasing the efficiency of what they are producing today. However, in the medium term, just 6-10 years, climate induced stress will reduce productivity, and producers will either need to find new planting materials or switch crops. This is easier said than done—particularly for tree crops that take time to reach peak productivity.

Climate shifts will make some areas more productive so they, too, will be better suited for new crops. For producers that can afford to buy new land or hire consultants to help, this is an inconvenience. For poorer, smaller producers who are often farming marginal pieces of land this will pose significant problems. We already see this with coffee in Central America, cocoa in West Africa and citrus in the U.S. and Brazil.

Climate change means crop change. Producers will not be able to grow the same crops their ancestors did.

All Solutions on the Table

To help producers adapt, we need to keep all possible solutions on the table. What is acceptable will likely vary from one producer to another, one country to another or one consumer to another.

When it comes to genetics, the question is not “if” but “which.” Climate change, and climate smart agriculture, will warrant the use of genetics and marker-assisted breeding to identify favorable traits that increase productivity, improve drought tolerance and increase disease resistance.

But the impacts don’t stop there. Producing food on more marginal land and increasing the use of fertilizer, pesticides and irrigation produces runoff into rivers, lakes and oceans that causes stress in freshwater and marine ecosystems including, but not limited to, increasing coral bleaching at lower water temperatures.

Climate change affects more than just yields; it affects the health of the land itself. It took soil moisture up to three years to recover from the 2012 drought in the Midwest. When there are two years of drought in a row it can take 5 to 10 years to recover. In California, now in its fourth year of drought, there simply is not enough water to keep perennials like almonds and grape vines alive much less productive in many areas. While this is a severe drought, it is not known how common this will be in the future and whether it will affect other areas globally that produce a disproportional amount of the food we eat.

In a world where food production is increasingly variable, trade will become an important food security issue. Increased and shifting global consumption will complicate these efforts. Since 2000, international food trade has more than doubled from 6 to 12 percent or more of food produced. Just eight countries dominate this trade, exporting about 65 percent of all cereal grains and 85 percent of oil seeds. While they have demonstrated that they can produce the surplus needed to fill global food gaps, they are still vulnerable to climate change. In 2012, four of the eight countries experienced drought and global food reserves reached an all-time low. And today, political turmoil has affected production in the Ukraine, one of the eight exporters.

Tools that help producers, companies and banks alike assess environmental and social risks from commodity production. Such tools help players all along the value chain anticipate risk and support or encourage climate smart agriculture. But, it is the producers on the ground that need options. They are the first line of defense. Performance based standards and certification programs already reward the best performers. Now we need to focus on the rest of performers. The bottom 25 percent of producers of any commodity are responsible for about half of the environmental impacts but only 10 percent of production. Governments need to play a bigger role here to define what is acceptable and to encourage continuous improvement.

Globalization is real. Human behavior in one corner of the planet affects biodiversity in another. The cumulative effects of our consumption of natural resources—food, water, land, energy—are yielding increasingly negative results. From drought-ridden California to war-torn Syria and Ukraine, we can see the interplay of food insecurity, climate change and the global grab of resources on the evening news.

But, our climate isn’t the only thing that is changing; social and political forces including income distribution, consumption and urbanization are shifting quickly as well. The scope and scale of change means that there will never be a blueprint for producers. The issue is how to think not what to think. What is a better practice today will be the norm tomorrow and what we need to change the day after.

Producers, consumers, financial institutions, the scientific community and the world’s most powerful food companies all share a responsibility to tackle these challenges before acute problems become chronic ones. Can we leverage the growing demand for more sustainably produced food to generate investments in more sustainable production? And, as important, can we anticipate the changes needed rather than lurch from crisis to crisis by country or commodity? We need a more agile global food production system that can anticipate the impacts of climate change. Every year we delay, the cost of inaction will only increase.

A more in-depth version of this piece first appeared in the Aspen Journal of Ideas.

Mark Campanale Founder and Executive Chair of The Carbon Tracker Initiative
URL: https://www.brinknews.com/making-matters-worse-how-climate-change-amplifies-food-insecurity/
Get ahead in a rapidly changing world. Sign up for our daily newsletter. Subscribe
​​